A mate for SS at last 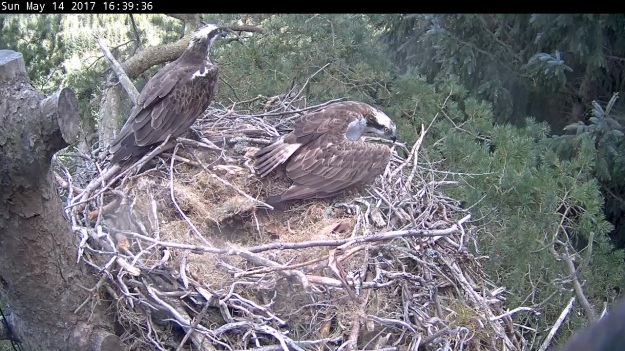 We are absolutely thrilled that SS has found a partner at last. On Sunday 14 May, White Leg SS was sitting at his nest site alone again where he has spent the past month waiting for a female osprey to join him this season. He was seen to be restless and looking skyward frequently and the volunteers on duty could hear an osprey calling in the background.

David, the volunteer on duty at Glentress, felt sure that something was about to happen and thankfully remained later than usual, which was just as well, as the female bird, Mrs O dropped into the nest site to join SS.

Don’t play hard to get SS 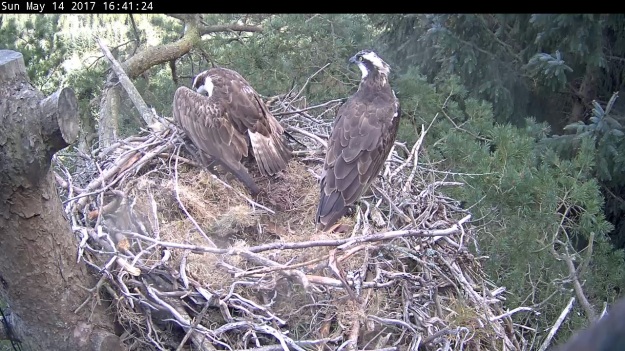 SS keeps away from Mrs O

We would expect that he would be really pleased to be joined by a single female at last, but no, he was mantling his wings and creeping around the nest to get away from her in alarm. Osprey courtship is a curious thing – she is available and wanting to breed and so is he. He has an impressive eyrie in which to raise a family, a territory in which he is Lord over and no other osprey has managed to usurp him from his position. So we wonder why he displays such coy behaviour? It is obviously a big draw for the female ospreys because Mrs O has been quite undeterred by his behaviour and has continued to pursue him with tenacity.

Hang in there Mrs O 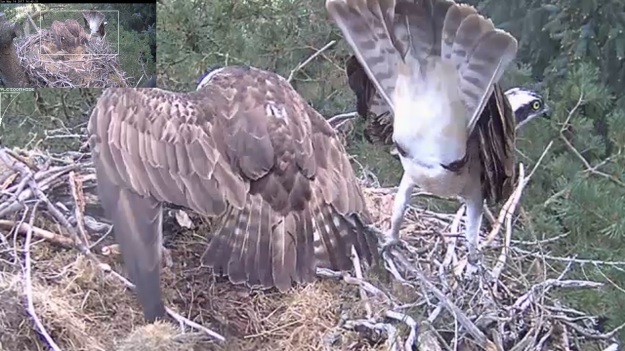 After weighing each other up and SS showing his back to Mrs O, dropping his wings and giving off distress vibes with head bent down and looking away from her, she took a bit of a hint and flew off. Well that changed his attitude alright; He dropped the distress mantling immediately after she left the nest and looked around, staring after her.

Did she watch for his reaction as she flew above the nest? Perhaps, because she immediately returned and landed right next to him, fluffing her tail up as she did so. Although he then moved away from her again, perhaps there was enough of a spark of interest there to encourage her to stay? Eventually, SS took off and Mrs O did not give up. She watched him go, fluffed up her feathers and followed him. 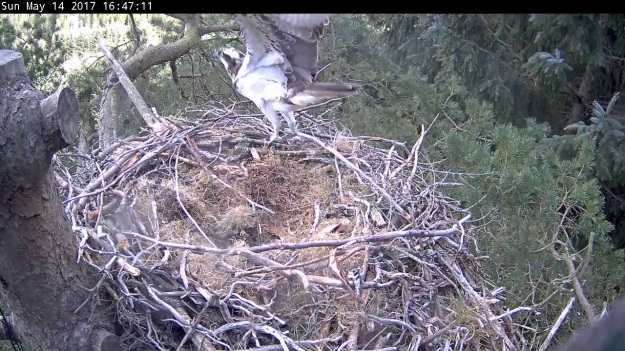 Follow that bird, Mrs O. Don’t let him get away.

What a looker but no Darvic 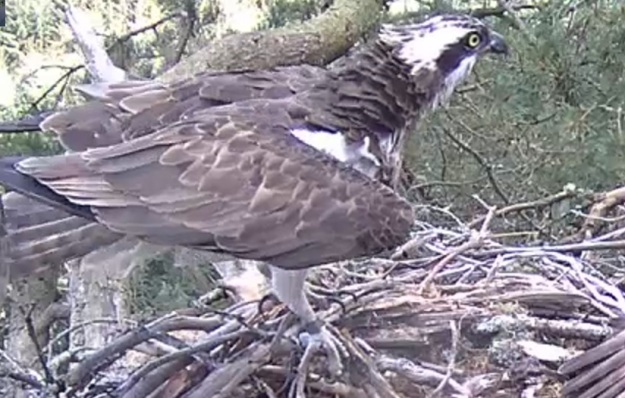 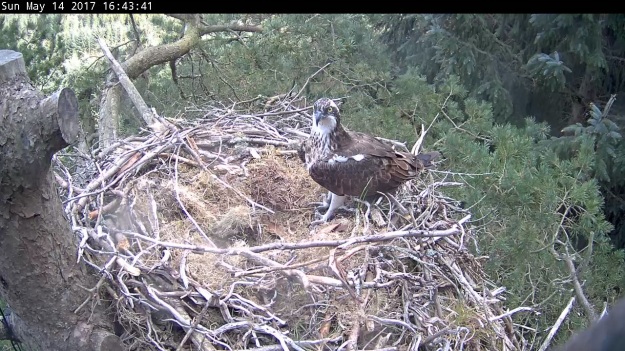 No Darvic just a BTO ring for Mrs O

She is a stunning female, with dark sleek feathers on her back and a rich patterned chestnut coloured necklace of feathering around her neck and chest. Her head crest is well defined, with dark markings to the forehead and back of the otherwise white head, with characteristic dark eye-stripe. She is magnificent and seems in great condition.

We have no way of knowing where she is from as she has no Darvic ring on her leg with coloured letters but she does have a BTO ring (metal ring with serial number) on her right leg. This is interesting as it could be that she has somehow lost the Darvic ring from her left leg or could it be that she never had one? We will try to find out some information about how long Darvics have been in use for. 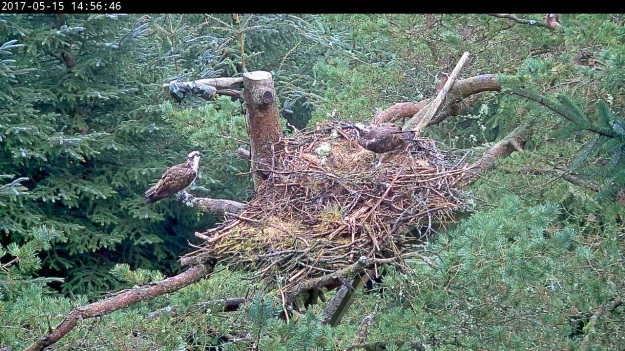 Please don’t be so coy, SS. He moves to the end of the branch, as far away as possible

On Monday morning, both ospreys were together again at the nest site where courtship between the two seemed to be very slow indeed. But then the weather was a particular passion killer with teeming rain! Mrs O had a fish in her talons and SS was trying his best to keep as far from her as possible. He flew on to the perch and then teetered to the very end of it just to make sure he had put the maximum distance between him and her.

Once again, Mrs O was undeterred. We do not know if he brought the fish in for her, but it did seem a little unlikely given his anti-social stance towards her presence. After a couple of hours sitting at the nest site largely ignoring one another, she moved up on to the perch to the right and ate her fish while he remained on the left hand perch.

The SS way of finding a partner 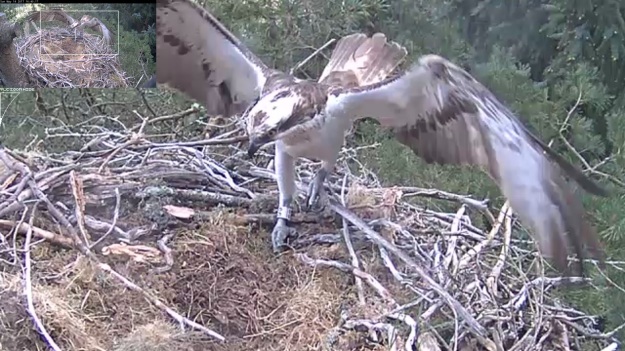 So far, SS is to be admired. We were slating his tactics of sitting at the nest waiting for a female last week but it has paid off. They literally fall from the sky for him and drop into his main nest at TVOP. He would not win any courtship contests, that’s for sure, but he definitely has appeal for this female who has dropped in and seems willing to stay.

Mating at last for the new pairing

Things have become more intimate between the two and mating has since occurred at the nest site between them, although he never hung around long afterwards.

Mrs O began to move nesting material around and this is a sign that we can at last be optimistic that things looking up at this nest location. We hope that they are a fertile pair and that she produces viable eggs. For now though, we are very content that SS has at last found a partner.

Good luck for the rest of the season as it will be unique for this project to have a pairing take place as late in the year as this. This will prove to be another interesting insight into the lives of ospreys, as we may find out if such late parings can lead to successful rearing of offspring. Fingers crossed.