A day in the life of an Environment Manager

Neil McInnes is Environment Manager for North Highland Forest District, based in Golspie. This is a role that has it all – from ospreys and wildcats to bog restoration and cattle grazing projects. Neil will take you on a journey through some of his career highlights and favourite places – find out where the first tree planting in Scotland for the Forestry Commission took place in 1919 and what it is like to come within a metre of a Capercaillie during a lek. 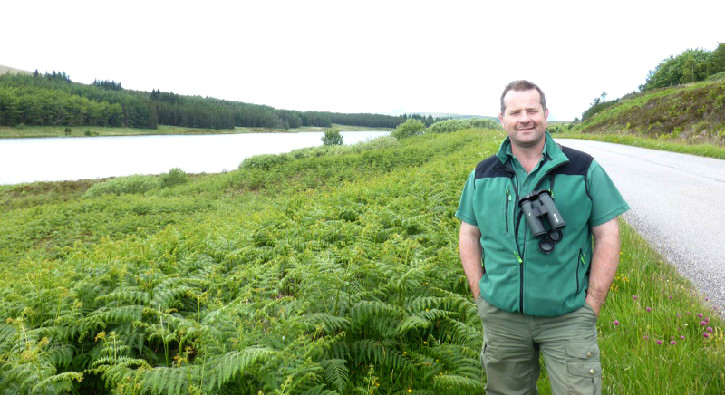 Tell me about being an Environment Manager. What’s your working day like?

It’s a really varied role and that’s very satisfying. I can confidently say early starts are a pretty common feature. During the spring, when we’re counting grouse at lek sites, I’ll be in the forest by 4am, walking survey transects or sitting in a hide. It’s a bit of a conservation cliché, but it is a privilege to observe endangered birds like Capercaillie going through their paces at leks. There’s also plenty of time in the office. I manage a team of three rangers and a forester delivering the Forest District’s ecology and cultural heritage programmes and advising colleagues in Operations and Planning. It takes time to organise work programmes and make sure everyone’s got the resources they need to do their jobs across a 65,000 ha district. I'll often meet up with people from local fisheries boards or the communities we work in. The majority of our funding in recent years has come from external sources - we have some great projects on the go and working with teams from other organisations can be intensive but very rewarding.

What projects are you are involved in?

At the moment our biggest project is mire restoration, largely funded by SNH’s Peatland Action Fund. But with around 100 scheduled monuments to keep in good condition and over 25,000 ha of open habitats to conserve, grazing projects are increasingly common. This could be cattle, pigs or sheep and we often work with our farming neighbours to achieve this. If that adds a little to their enterprise then I see that very much as part of our rural development role. Other new projects include starting surveys with the Scottish Wildcat Action in the Strathpeffer Priority Zone, working on river conservation, creating native bee conservation meadows, recording new populations of a variety of species from lichens to molluscs… it’s a long list and the opportunities are endless!

Can you tell me about your favourite place in North Highland Forest District? What’s special about it?

Now that’s tricky! On a wet January day it’s probably the Lairg Fieldstation with a hot mug of tea, planning the years work! But out on the National Forest Estate there are so many beautiful spots; the coastal pinewoods of the Morangie Natura reserves where Pine Marten, Capercaillie, Black Grouse and Red Squirrel can all be seen, the sub alpine slopes of the Ben Wyvis new montane woodlands, or the mixed conifer forests of Lael, near Ullapool. On a clear autumn day from above the Lael treeline, if you look up to the east there’s the rising crags of Beinn Dearg and maybe a golden eagle, or gaze west and you might be lucky enough to spot the Outer Hebrides. If you’re pressing me I’d have to say Borgie Forest in Sutherland.

It should really be a special place for all of us because (known locally as Forest Number One) it was the scene of the first tree planting in Scotland for the Forestry Commission back in 1919. Some of those trees are still there and it’s a great reminder that the aims of FC back then are just as relevant today – producing timber and creating local rural employment. What I find fascinating is that Borgie’s story has been one of transformation over almost a century. Nowadays it’s still producing timber that’s milled here and also exported from Scrabster in Caithness. But the forest has changed with the ebb and flow of forest policies and today, equally as important as the Spruce, Pine and Larch are the ancient woodlands of Coill a Phuill at the southern flanks, the broad sweeps of blanket bog and the newly establishing montane woods underneath the crags of Creag Dubh. 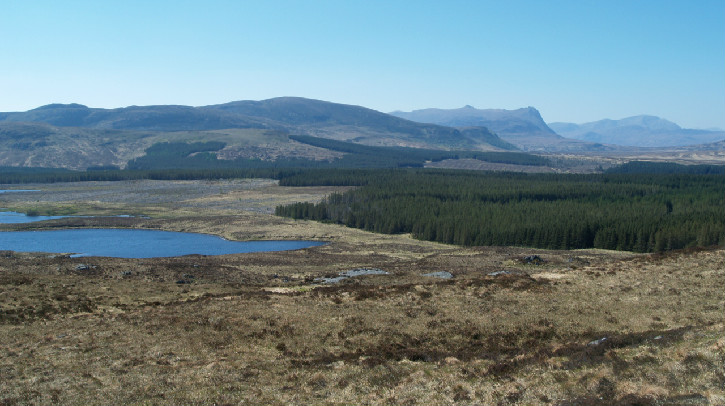 What motivates you each day? What do you love about work?

You have to be happy with a long term view if you want to work in forestry! Day to day is easy because I work in some stunning parts of Scotland, with some committed and knowledgeable people in a job I love for its variety, challenges and opportunities. I was told early on in my career “love what you do and you’ll never have to work a day in your life!”. Of course there’s always the paperwork to get through and some setbacks, but I’ve been a forester for almost 30 years and using that experience to get results or solve problems is pretty satisfying.

What brings you to a forest when you’re not working?

Usually my daughter on her pony or my son on his bike! I still manage the occasional day’s stalking or fishing to fill the freezer. But the medical profession is only just realising what Scottish foresters have been keeping a secret for 300 years – no matter if you want hair raising speed or peaceful reflection, you’re guaranteed to recharge your batteries in the forests.

Tell me about your most memorable day on the job

That’s even harder to pick than my favourite forest! It has to be my first experience of counting Capercaillie at Glenmore Forest Park. The lek is a grouse breeding ritual and capercaillie are big noisy birds. From the first heavy wing beats you hear in the dark, sitting in the cramped hide, the adrenaline is flowing! On my first count a big male came within a metre of the hide, displaying and calling. After it was all over and I was making my way back to the truck, one of the Cairngorm reindeer appeared through the mist among the old granny pines. It could have been a scene from 4,000 years ago. It left a big impression on me! 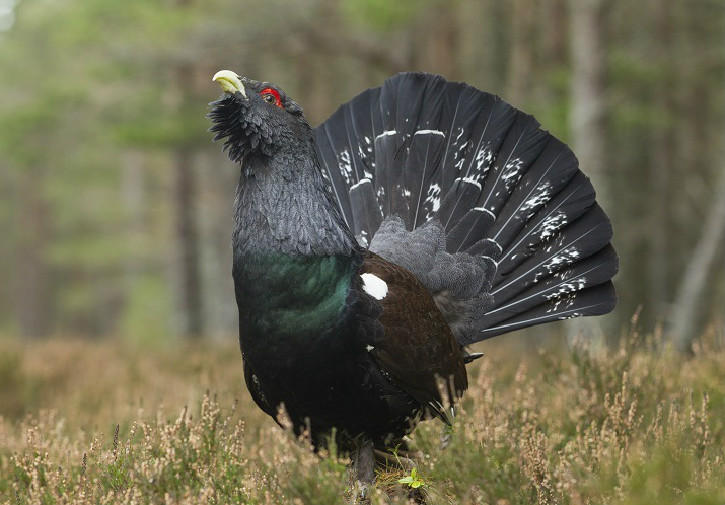 What’s been a highlight for you?

Working on freshwater pearl mussel conservation. Perhaps not the most charismatic forest dweller, but their story is a pretty interesting one! They can live to almost 200 years old, quietly filtering water in the burns and rivers. North Scotland is a global stronghold with perhaps a fifth of the recorded world population within our Forest District so we have a special responsibility to help their conservation. They are a great indicator of water quality because if the water is good enough for them then it’s in very good condition. Last year the national SNH survey revealed 11 Scottish rivers had lost their breeding populations, so it’s increasingly important we do everything we can to make sure the National Forest Estate’s aquatic and riparian habitats are in the best condition. The conservation effort is focussed on improving forest operations practices, helping to remove barriers to migratory fish like salmon (the mussel depends on salmon and trout during part of its life cycle) and restoring native woodlands along our watercourses. A lot of that work also has benefits for wildlife. And the effort is an international one, with conservation projects in Scandinavia, Russia, Portugal and Ireland.

What challenges have you faced?

Wind! It’s an occupational hazard on an Atlantic Island. Two months into my forestry career the 1987 hurricane that made weatherman Michael Fish a household name blew through Argyll, where I was working as a wood cutter. I spent the next six months clearing up the mess! Last year the gales were at it again, blowing down the equivalent of two years’ worth of our harvesting programme overnight. And it’s been a recurring theme throughout my working life.

You have been involved with the osprey re-introduction programme. Why is this work so important?

Osprey are one of Scotland’s conservation success stories, largely thanks to the foresight and hard work of a generation of individual conservationists like Roy Dennis and bodies like the Scottish Raptor Study Group. But it would be negligent to sit back and think the work’s done. Despite this being one of Scotland’s most recognisable raptors – it’s the emblem of the Cairngorms National Park amongst other things – there’s still a threat of persecution and collectors still value the bird’s eggs. We can help the conservation effort by building relatively cheap artificial nest sites and working with other re-introduction schemes by donating a chick from a brood every couple of years. A few of our chicks have ended up as far away as Spain, as the Spanish Government work on their reintroduction programmes. 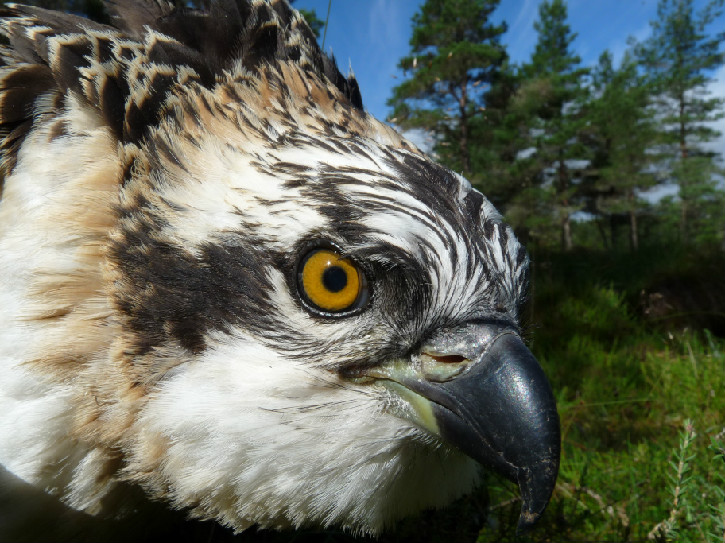 The Environment team recently completed a project to restore bogs and you have been award funded from SNH’s Peatland Action Fund grant. Why is peatland restoration big on the agenda?

Yes, we’re still at it! Last year we successfully delivered 650ha of forest to bog restoration, with funding from SNH’s Peatland Action Fund grant. This year we’re working across 750 ha of degraded open habitat and forest to bog sites. This work has injected over £2 million into the rural economy of North Highland as well as contributing to a global conservation effort!  All the work is taking place on or next to Natura designated mires and helps to deliver our Land Management Plan commitments.  There are currently around forty contractors and sub-contractors working in Dalchork Forest, Sutherland and Morangie Forest, Ross-shire to finish the project.

Peatlands are a bit like freshwater mussels! They might not immediately inspire, but once you take some time to study them you realise what an incredible contribution they make to ecology. Forestry has a mixed history with peatlands. During the middle of the last century up until the 1980’s a tremendous amount of damage was done to these habitats despite a significant conservation effort. Acknowledging the mistakes made and working hard to put them right as far as possible has been a really important step for modern Scottish forestry.

The blanket bogs of the north are significant greenhouse gas stores – some scientists believe the peatlands can hold up to five times the carbon of a northern forest. So combined with forests on the right soils, healthy bogs may hold the key to climate change mitigation. A healthy peat bog can filter water, help regulate water flows in dry periods and provide a home for some of our most endangered wildlife.

Scottish Government has given landowners a challenging target for bog restoration and to make a significant contribution to that, with the help of funding from SNH, is very rewarding. 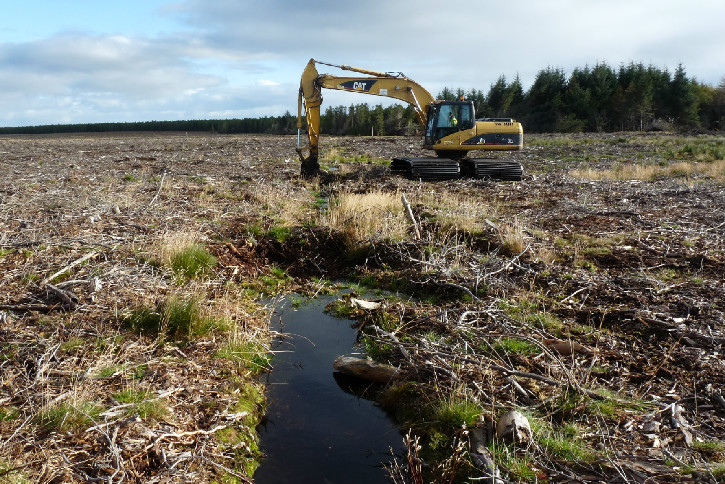 How do you see your role changing in the future?

I think in general I’m a bit wary of using our resources for single species conservation efforts. It’s been popular in the past but my view is that Scotland’s species and habitats are so influenced or affected by humans that the biggest gains we can make in conservation are the landscape scale restoration projects like mires and native riparian woodlands. That way our current species and the species coming our way as the climate changes have the best, most resilient habitats to live with. I think that will be one of the biggest changes in environment work in the near future and as Scotland’s largest land manager we have a key role to play.

It’s an exciting time for us, as the management of the National Forest Estate begins to involve a much broader view of how we manage open habitats, forests and waterbodies. Not just to provide basic resources like timber but also the hard to quantify ‘ecosystem services’ like clean water, carbon stores and places for people to come to for health and recreation.

But like any forester, ultimately all I can do is try to leave the place in as good a shape or better than I found it…