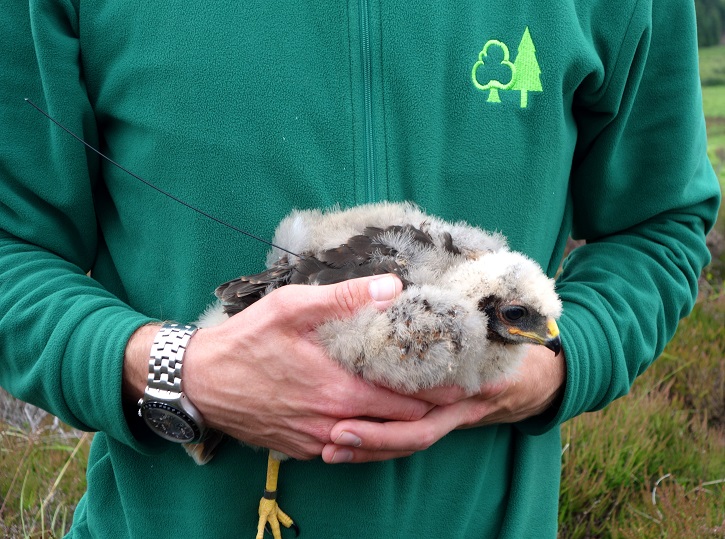 A Tay Raptor Study Group member has made the exciting discovery of a Hen Harrier’s nest on the National Forest Estate in Highland Perthshire.

Tay Forest District’s environment team was delighted with the find and helped to coordinate the protection and monitoring of these raptors with the ringing and satellite tagging of the chicks when they hatched.

News from the nest

Two eggs hatched – a male and female.  Both had colour rings attached to their legs for future ID purposes, as well as having a specially designed satellite tag fitted to record habitat usage, dispersal, and general health and status of the birds as they fledge and set up their own territories.  This valuable information will be used to aid future management strategies on the NFE to benefit this declining species. 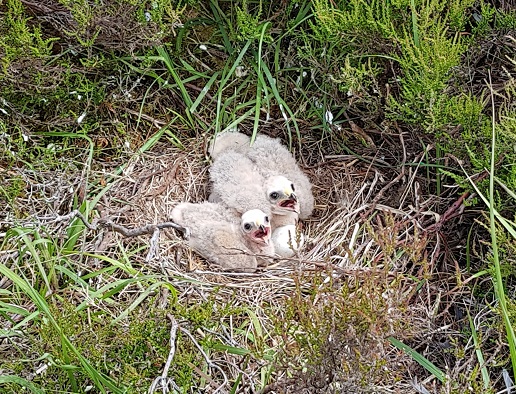 We were delighted to be able to satellite tag two chicks from the Rannoch area and look forward to tracking their dispersal and wider movements.  As the UK's most persecuted and threatened bird of prey it is very important that we learn as much as we can about their dispersal behaviour which may aid conservation efforts.  Many thanks to the FES for their help and support in facilitating this tagging work."

We are working with RSPB Scotland, British Trust for Ornithology and Tay Raptor Study Group to learn more about this iconic bird of prey.

This is the third year that harriers in Perthshire have been fitted with satellite tags as part of the Hen Harrier LIFE project. The tags allow the organisations to see where birds are going, some of the distances travelled and how they check in with each other over the winter and where they eventually settle to breed. The data helps us to identify and protect winter roost sites, as well as being able to pinpoint where natural deaths and illegal killings have occurred.