Forest Enterprise Scotland recently surveyed and investigated the farmstead of the Wee Bruach, a series of ruined late 18th century buildings, enclosures and corn drying kilns in Loch Ard ahead of harvesting operations. The buildings were identified as unusual by the Scottish Vernacular Buildings Group. However, trees were growing very close to the buildings, so we recorded the site in advance of careful felling by Harvester machine. The buildings were surveyed by terrestrial laser scanning alongside an investigation of the available historic archives. This resulted in a detailed record of the site, informed the safe felling of the surrounding trees and has added to our knowledge of the history of the area. 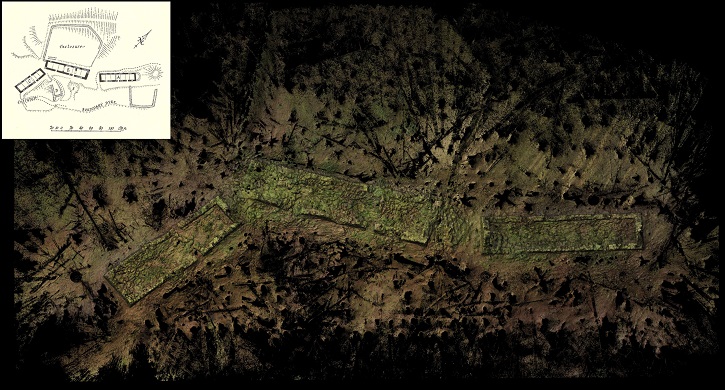 This image shows the original hand-drawn plan of the farmstead from 1963 alongside the new plan, created using laser scanning and photographic colour.

Matt Ritchie, Archaeologist for FES, visited the site before harvesting: “I saw that the surviving ruins were unusually long and narrow. These buildings, the large corn drying kilns and the proximity to running water, in what is a relatively inaccessible area but also close to Glasgow, got me thinking about the large scale illicit production of whisky.

“We know that the Wee Bruach was a sheep farm in the late 18th  century before it was finally abandoned as a dwelling between 1841 and 1851. There are strong associations with a number of the important families in the district, including Buchanan, MacFarlane and MacGregor – and a suspicion in the archives that there may have been links with cattle droving and perhaps the illicit production of whisky.”

In the late 18th and early 19th centuries, the government wanted to control (and tax) whisky production. The Excise Act of 1788 banned the use of small stills. Excise officers were sent to search for illegal whisky stills and to confiscate the equipment and whisky they found. But commercial legal whisky was of poor quality because of the high rate of tax imposed on the malted grain used to make it. To cut costs, the large distilleries began to use unmalted raw grain. This produced an inferior drink called corn spirits. Real whisky production went underground and the stills were hidden in remote places. These illicit stills paid no tax and continued to use good malted grain. Once their whisky had been smuggled to lowland markets, it fetched a higher price than the poor corn spirits made by the licensed whisky distilleries.

Customers for the illicit whisky were not just farmers and factory workers but the rich – even the judges and lawyers whose job it was to stop the trade. So the Excise Act of 1823 cut the duty on whisky and made it easier to run a small legal distillery. The quality produced by the legal distilleries rose dramatically while the demand for illicit whisky fell. Could the Wee Bruach also have been an illicit distillery, producing whisky for sale in Glasgow? 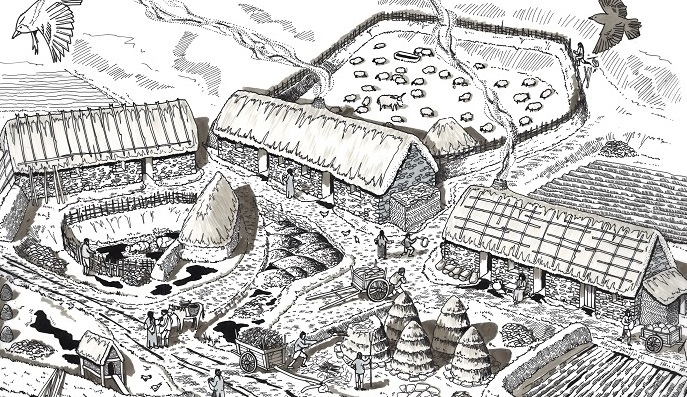 The project is a great example of how we ensure best practice historic environment conservation as part of our sustainable forest management on the National Forest Estate.

You can read more about this project in September’s edition of Current Archaeology magazine.