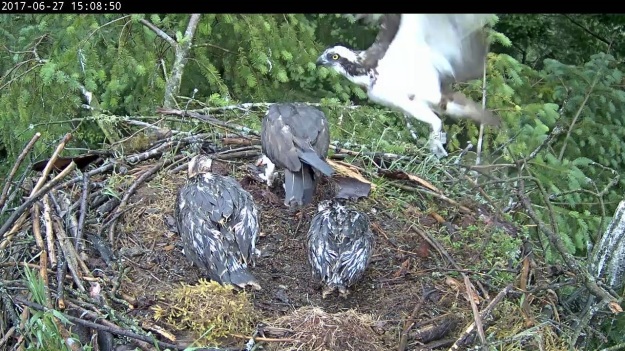 This week we have news from our back up nest no. 2, where parent birds Yellow 8C and his unringed partner have two thriving chicks. Just like their young from last year (PX1 and PX2) one is really big and the other much smaller. It could possibly be a male and female or that they have a few days age difference between them.

Not only do we have news but we now have the facility to view the nest ‘live’ via satellite technology at the Glentress Wildwatch Room, thanks to the technical genius and skill of Bill Irvine and Tony Lightley from Forestry Commission Scotland. This is a truly exciting development for the project as the young birds from this nest are fitted with satellite tags so that we can track their progress for the first few years of their lives. This information is invaluable in revealing detail about osprey migration and survival. 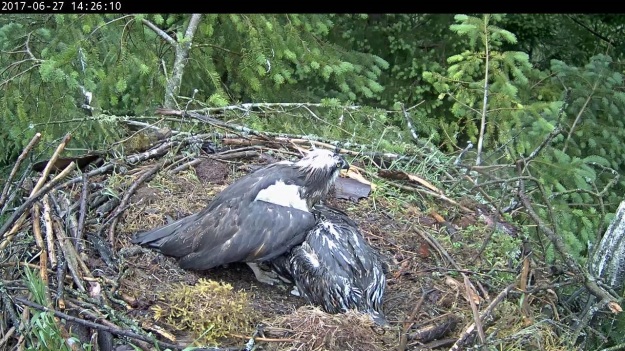 Mum shields young from the rain

Previously, we have only been able to download brief video clips from the camera at this nest once the season is underway, so it is a real treat to now be able to follow this family on a daily basis. We watched them live for the first time in the torrential down pouring rain as their mum stoically shielded her young from the worst of the weather.

The chicks, although well covered in feathers, burrowed beneath their mum for warmth and shelter. Yellow 8C returned to his family briefly and dropped off a small fish for the female. She took it from him and she fed for a short while but the chicks were not very hungry and soon nestled back beneath her for warmth. 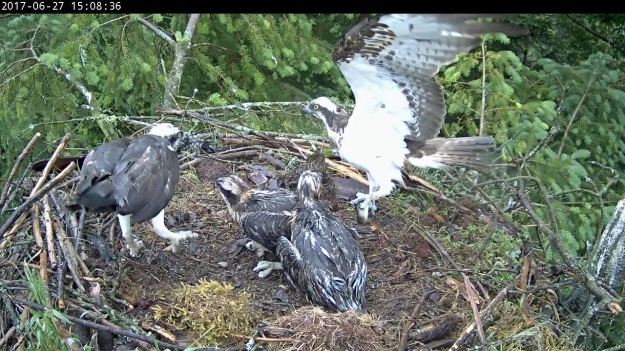 The female bird is a beauty with long strands of white crest feathers that she kept shaking to dispel the water droplets. It gave the back of her head a rather fetching look reminiscent of 80s singer Limahl at the peak of his Kajagoogoo fame! This bird is not ‘too shy shy’ though as she is a brave mum battling the elements to defend her chicks from a deluge of the worst of Scottish weather. 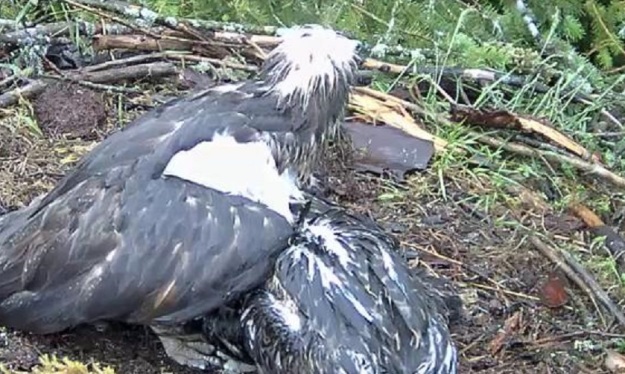 We are really looking forward to seeing how this family progresses and soon they will be ringed and also fitted with tracking devices so that we can follow them as they grow up and leave us. 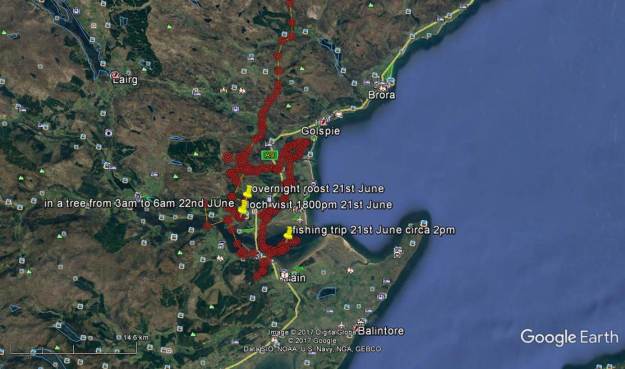 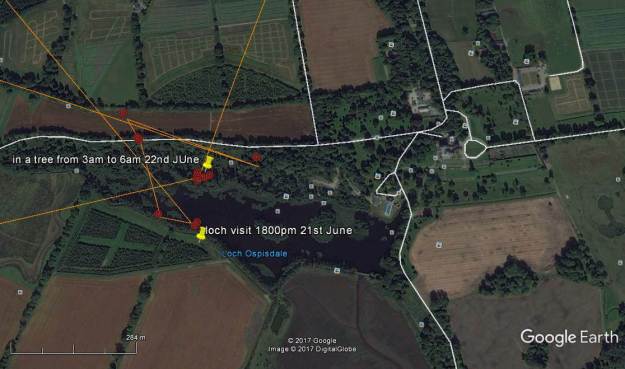 Yellow 8C’s daughter, FK8, is still up in the north of Scotland and she has not settled to nest this year, seemingly preferring to visit two separate areas. This week’s data has revealed that she was up in the Forsinard Flows RSPB Reserve where she has plenty of lochs to fish from. She perches up for long periods on fence posts where presumably she eats her fish, then roosting in plantation forestry by night.

She took a journey back down to the Dornoch estuary on 21 June. She then visited Skibo Estate and Loch Ospisdale, where she possibly caught a fish as she rested a while after her visit. Later on in the evening she re-visited the same loch, before returning to a forest area where she spent 10 days at a nest site last year.

She is likely to be prospecting for a nest site for next summer, as she will be ready for breeding then. So, it is a good thing that she is keeping her options open across two very good potential areas. All she needs to do next is find a good mate.

SS and the two females meanwhile…. 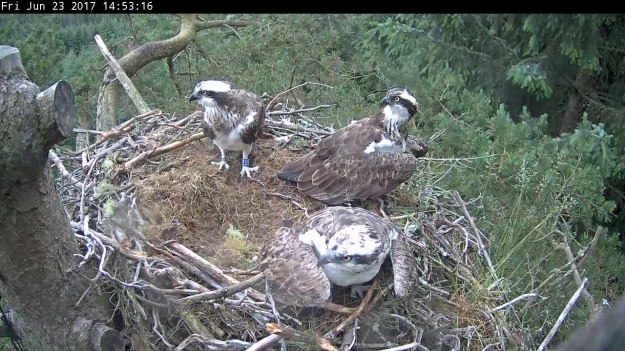 A frosty reception for FS2

Meanwhile, back at the main nest SS is still having a troublesome time keeping two females happy. Mrs O seems to be emerging as the more dominant female of the two, for when FS2 visited the main nest while Mrs O was present with SS, they both mantled and turned their backs to her, adopting a defensive posture to give her the message that she wasn’t welcome. If she is present at the nest alone with SS, he is more accepting of her presence and will even share fish - but don’t tell Mrs O! 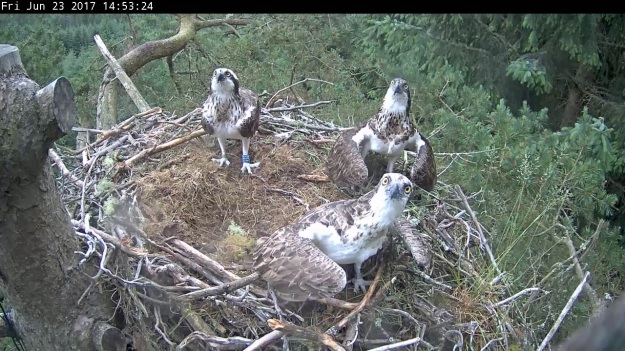 Did somebody mention free fish?