The life of a harvester

The life of a harvester

Few jobs are more dangerous than forestry – but it’s more than trees and saws that put workers on edge. 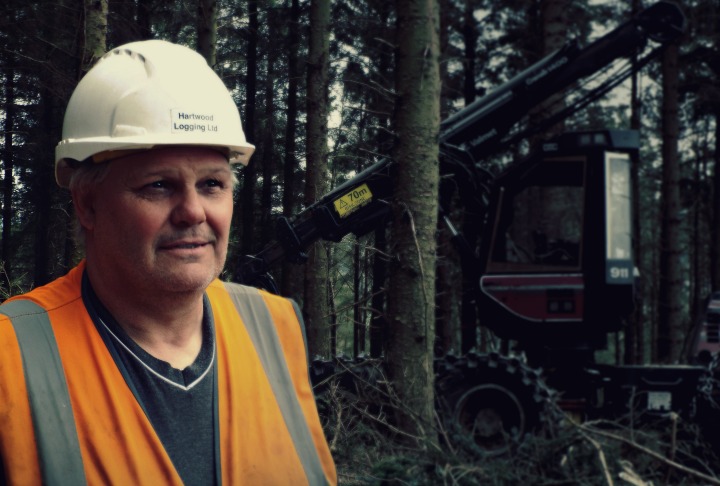 The children’s Easter club are here to see machines. They’ve come to watch forestry in action. Allan works the harvester while his son Ross steers the forwarder. Our recreation forester Katie hopes the demonstration will help the kids 'get' it.

They pass round a sheet of bullet proof glass. Embedded in it is a piece of metal – the jetsam of a forestry harvester mechanical fault shot at lethal velocity. A bullet in disguise.

“If this was a rifle range, would you come down here?”, Allan asks.

The children respond with a unanimous no. The answer is obvious. No one would choose to risk wandering into a stray bullet. But this isn’t a bullet. It’s a piece of broken chain. They don't realise if you apply the same force to something innocuous, it could do just as much damage. Chain shot is just one of the hidden risks forest workers face every day. 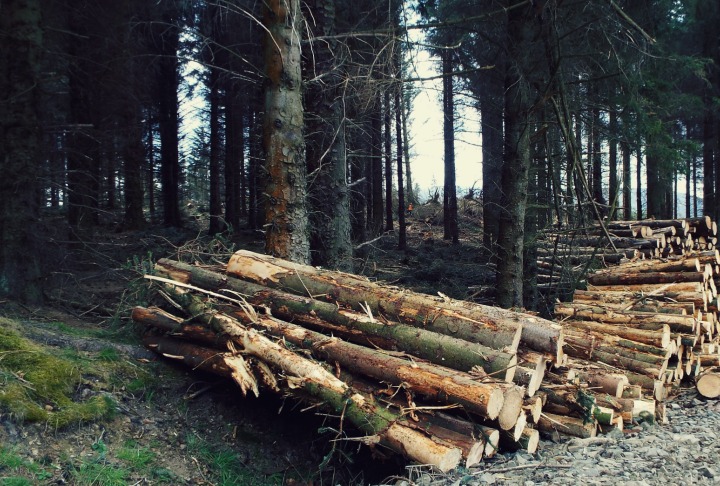 We sit outside, sheltered from the rain in the awning of the Glentress Peel café, steam billowing from the sip holes of our paper cups. I'm spending the day with Allan Dickie, a 59-year-old harvester from the Tweed valley. A veteran of forest operations, he’s been in the business his whole life. He’s watched the workplace evolve from lone foresters deep in the woods with hand saws, to operators using heavy machinery in public spaces.

At four years old, he watched the woodcutters come to work. Living on an estate, there was always maintenance to be done. He watched them trim the trees and lingered as they built a pyre of burning brash, cooking their foil-wrapped sandwiches in it.

“I remember them giving us a bit of this toast. A cheese piece melted onto the shovel, and it was absolutely brilliant.”

As generous with their scran as their language, he’d wandered home with a sandwich - and the f-word. He grins.

“From then, whenever I heard a saw, I was always attracted to it.”

Allan’s neighbour was a woodcutter (and still is at 85). From age ten his evenings and summers were spent working the woodland. By the time he left school, with little opportunity to spend, he had £17,500 in the bank. A job he knew, with the cash to back it up; forestry was the natural choice. By 17, he was the Forestry Commission’s youngest contractor – with little idea just how dicey things could get.

By thirty, he was already a seasoned woodcutter. But 1987 was a dark year for forestry. On 15 October, Michael Fish made his infamous prediction, that there would be no hurricane. By the early hours, things were very different. Britain awoke to devastation. A landscape scarred by broken windows and ripped-off roofs. 15 million trees were flattened overnight, infrastructure failed,  lives were lost.

This was the trail of an extratropical cyclone. The clean-up required experts, so Allan left for the south of England, where the damage was worst.

It was here, on a Pease Pottage estate, he first encountered chestnut coppice, a strong hardwood, brittled by age.

“There were three guys killed in the first month. If you drove over it, it shattered. It went up into the machinery, and through cables.”

The wood was unpredictable under a saw, transforming branches into spears, destroying machines, shattering jaws and taking lives. 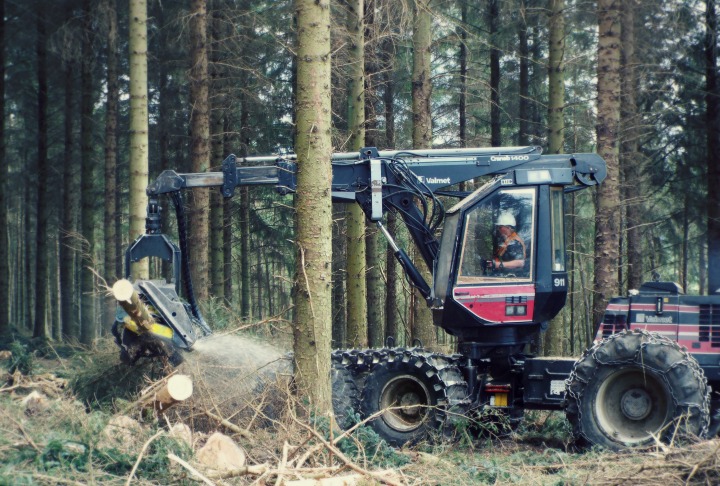 Today, when Allan works, he’s in the cab of a 12 tonne harvester – that’s the same weight as 12 elephants, he tells the kids. His work is quick and methodical. The boom extends, the hydraulic claw grips a tree and the saws get to work. There’s an elegance to how effortlessly he plucks a 30 foot larch from the ground. His huge harvester becomes an extension of his arm. It’s practiced, but never complacent.

It’s tempting to think that mechanisation has removed the danger. That the bulletproof glass protects him from the perils of frontline forestry. The reality is quite different. The dangers remain – they’ve just morphed into new ones.  I ask him if he still gets scared.

"You never know what the ground will be like", he tells me. "You’ll get a sharp reminder of that most weeks". 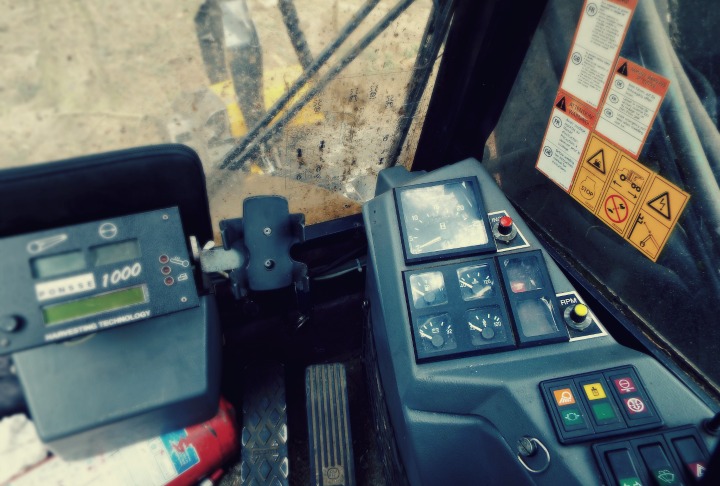 Allan knows he’s working with something much bigger than himself. We move under a false sense of security thanks to high-vis, signs and health and safety drives. But this is not an office. This is nature, and nature cares little for the rules we impose on it. Next to giant trees and heavy machinery, we are at the bottom of the food chain. It always has the propensity to be unpredictable, which is easy to forget if you don't work in a risk zone every day. Working alongside the public is a challenge for even the most skilled operators. As more people head outdoors, more work is needed to keep things in shape.

Allan knows they don’t realise what they’re walking into – but still can’t compute it.  Walkers and cyclists make decisions based on the risks they perceive – but have little knowledge of what’s really going on. To them, it’s never front and centre of their forest experience. For them, there are diversions, not deaths. Their biggest grumbles are closed trails and re-routes.  Between timber stacks and lorries, bikes appear. After clear signs, a woman with a buggy squeezes through, all blissfully ignorant of how easily timber can slip from the forwarder’s claw. When challenged, their answers are frustratingly devoid of illumination. “I’m new here”, says the biker Allan sees regularly. “I always come this way”, says the woman with the buggy. They make their point and go on their way.  He climbs back into his cab, shaken, and gets to work.

“How do you deal with that?” he asks me.

I have no answers either. 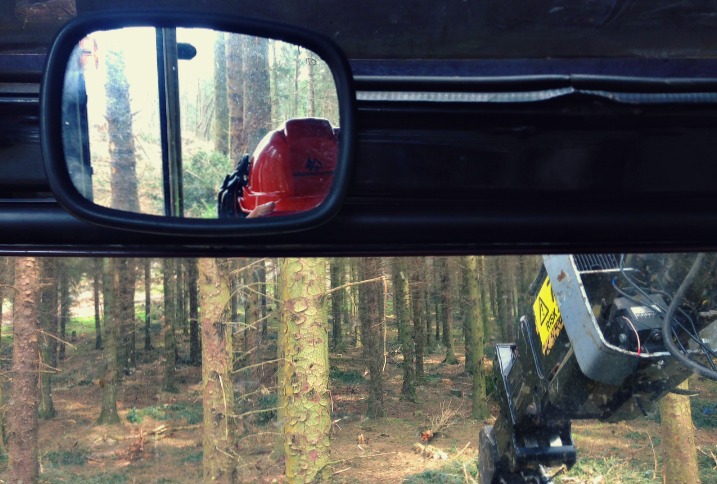 Allan knows we need a rethink. When I ask him if he could say one thing to a visitor, he draws a blank and I understand why. To him, the danger is manifestly obvious. He lives with it every day. He has to lean into the risk – to himself and others – just to do his job. His office could turn on him at any moment.

I get the sense that he’s working under a weight. The heavy, downward pressure of risk, knowing that you might hurt yourself or someone else. I think about my own office, and know I could never concentrate above percolating danger. He tells me about his worst near miss, the week before a major mountain biking event, on a closed route.

He watched the tree fall in slow motion, powerless to intervene.

He watched the cyclist breeze past, completely oblivious to what could have been. I wonder if I have ever been that cyclist. 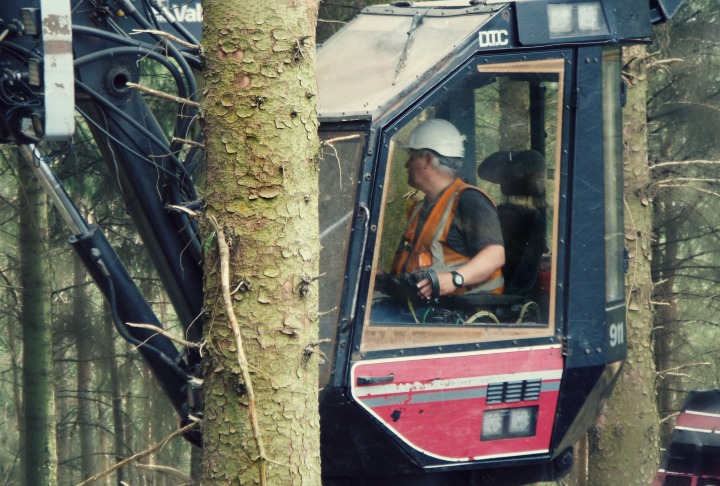 There are no easy answers to getting the safety message out. This is not a black and white scenario. Every site is different. Every job is unique. Every person is autonomous. There are too many variables for a neat, one-size-fits-all solution that keeps everyone safe. No matter how often sites are closed, signs are put up and standard safety practice is used, people make their own decisions.

Allan worries the public are getting sign-blind. That there is so much health and safety these days, that the messages never land. He tells me about a town in the Netherlands where they removed all the road signs in a radical attempt to reduce accidents. It worked.

It’s a tantalising thought: to be trusted to assess our own risk. That we don’t need “big” safety or warning signs, and that we could muddle through unscathed through trial and error. For a moment we lose ourselves in that ideal – a forest where everyone respected one another. An ecosystem of people, place and machinery, each with a mutual understanding of the other.

Reality creeps back in. Where trees fall, chains fly and people lose their way, we know it’s just a pipe dream. In the forest the stakes are too high for the workers to remain invisible.