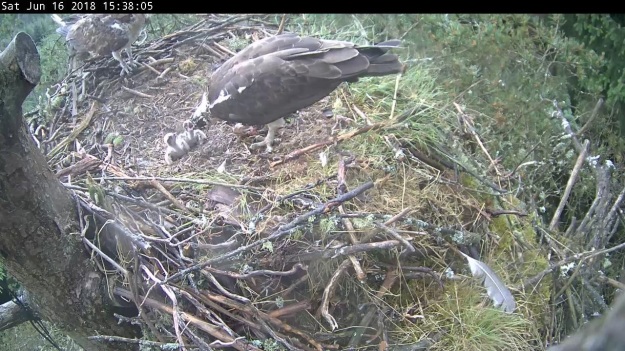 This has been the first week in the lives of the newly-hatched osprey chicks and it has been a case of mixed fortunes for them. The incredible Storm Hector brought down trees across the Borders, and lashing rain sent the Tweed into a raging muddy blur – not great for osprey fishing. SS must have struggled to fish in the windy conditions and murky waters, and the chicks were visibly seen to be hungry at the nest, with a frustrated Mrs O mock-feeding at times with no fish. 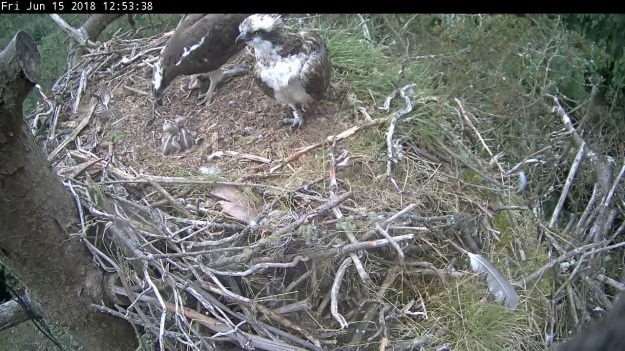 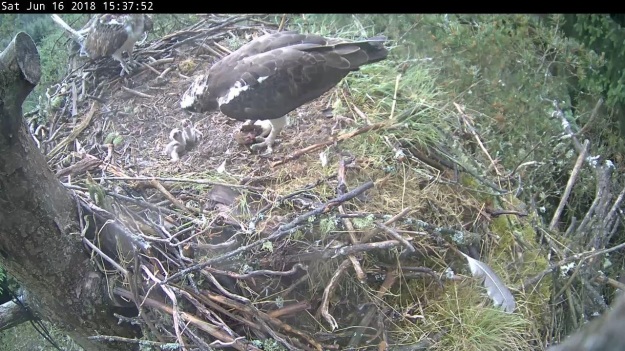 When SS did arrive with fish, she took it from him and proceeded to feed in great gulps for herself, tearing off strips that were just too big for the little chicks to swallow. When she did master the portion size, she concentrated on the liveliest chick and the feeble one seemed to have only a tiny morsel by comparison. She seemed to be quite clumsy in her feeding attempts to begin with. She stood quite far back, staying apart from the youngsters and then lunged in to aim fish pieces into the open beak of the waiting chick. 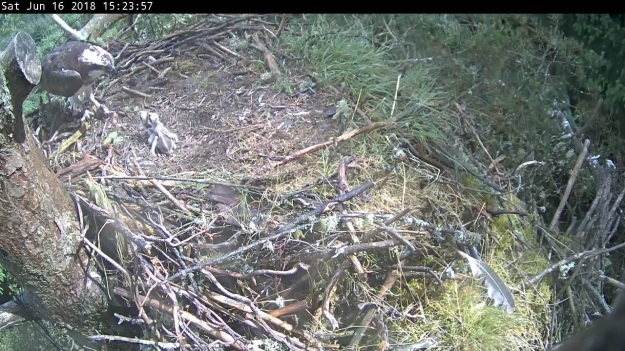 After some time and when her own hunger had abated, she seemed to relax more and control the feeding with greater precision. The chick receiving most of the fish seemed to grow stronger as the mouthfuls began to fill the young osprey’s tummy. Mrs O then turned her attention to the other chick and began to feed the little one in earnest too.

The fate of egg number 3

Mrs O continued to incubate the third egg, and was seen settling over it with the two chicks beneath her after feeding. In one of the video clips, it looks as though the egg had a crack right down the shell, and there were lots of flies around the nest too. On Friday 15 June, Mrs O stood off the egg and peered down at it, in much the same way that she had done prior to the other two hatching. It was hoped that this was going to hatch but it didn’t.

Saturday morning started off with a very hungry Mrs O and two hungry chicks on the nest, and the only food available was the tail end of a fish. This was torn into stringy strips and offered to the youngsters but was barely satisfying. Mrs O was so hungry that she forced the tail fin down her own beak, struggling to swallow it. There can’t have been much nutritional value in the fin but she was obviously very hungry. SS was absent from the nest, presumably out hunting for his family.

Later, while volunteer Robert was on duty chatting to visitors in the osprey centre, a young girl watching the nest suddenly called out that the osprey was eating the egg. He quickly dashed to the screen to begin recording and was astonished to see Mrs O with her beak plunged into the cracked-open shell. She pulled the fully-formed dead chick out of the shell and proceeded to eat it. The two chicks saw that Mum was eating, and they crawled over to her and began begging for food but she didn’t comply. She eventually gave up on the lifeless form, went back over to her young and settled them down beneath her.

That wasn’t the last excitement for the day in the centre. As soon as the cannibal episode was over, there was a visit from a very curious stoat who decided to come in and run around the building, confronting Robert (who has had an exciting week).

Robert gave chase to ‘shoo’ it back outside but the canny mustelid darted under the big cupboards behind the wiring for the screens and scurried out of sight. Robert went for help but no one was available, so he returned to the building. The cheeky stoat came out from his hiding place and made for the front door, trotting towards the café “as if he owned the place” according to Robert, before disappearing beneath it. A final word from Robert: “This must easily be my best ever day on duty!”

A hungry Mrs O recommenced demolishing the corpse of the dead chick later in the day, which entertained the two chicks watching her. SS finally appeared with a headless fish, which Mrs O took from him, at last able to feed her two offspring. A happy ending to a somewhat gruesome week in the Tweed Valley – talk about nature, red in tooth and claw!