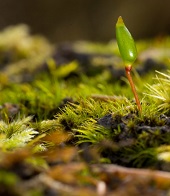 A rare moss has been found in several new sites. Buxbaumia viridis, or Green Shield-moss, is a nationally scarce moss and rated as endangered.

The moss differs to almost every other moss in that its leaves are not visible – only the distinct bright green fruiting body can be seen over winter, from November until April.  It prefers logs where there are areas of bare bark or little competition from other bryophytes.

Green shield moss grows in large diameter decaying logs and stumps, and under closed canopies, which offer more constant levels of humidity.  It is usually found in Plantations on Ancient Woodland Sites (PAWS) and Ancient Semi-Natural Woodlands (ASNW).   However, it has also been found in coniferous plantations, usually Norway spruce logs but sometimes Scots pine. 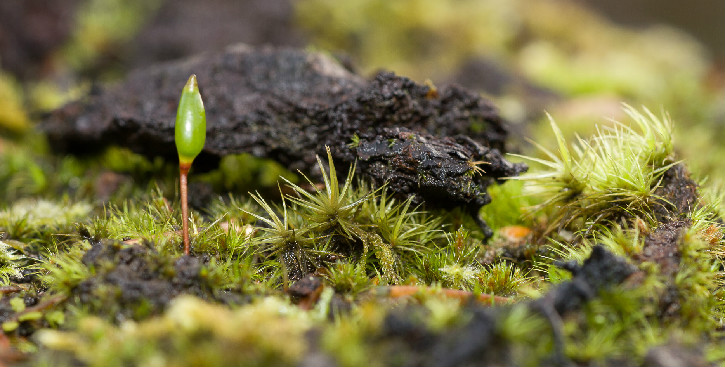 In 2016, the distribution of the moss was only known on 40 sites, from Garve to Kincardine. The most notable hotspot was at Mar Lodge in Aberdeenshire, where in 2016, 12 separate populations were located at two sites.

A survey organised by Scottish Natural Heritage (SNH) over winter 2016/17 found new locations in four of the 10 forest districts across Scotland.  In Tay Forest District two new sites have been found and in Lochaber Forest District, the most westerly population in Europe was discovered.

The surveyors walked an average of 35km at every new site before the moss was discovered.  This demonstrates that it is more practical to focus surveying for Green Shield-moss in coupes where it is known to be present nearby, and where the particular habitat requirements occur.

We are legally required to protect and enhance this species so we joined forces with SNH to visit a site in Lochaber Forest District, to discuss the practical methods that should be used to protect this species. Following on from this we will produce a management guidance note to support a licensing application process."