Reading the ruins: consolidating the broch of Caisteal Grugaig

Reading the ruins: consolidating the broch of Caisteal Grugaig

The broch of Caisteal Grugaig overlooks Loch Alsh at Totaig. It was built around 2,000 years ago, part of an Iron Age settlement tradition of small defended homesteads found all along the Atlantic coast of Scotland. The word broch comes from the Norse ‘borg’, meaning fort. But although they protected their occupants, they also demonstrated land ownership and tenure. Brochs were built in places with good agricultural potential, with relatively productive soils and sheltered conditions. The people who built them were farmers, growing oats and barley and rearing stock. The brochs were set within pockets of cultivated land and wider areas of unenclosed pasture, often with unrestricted access to the sea. 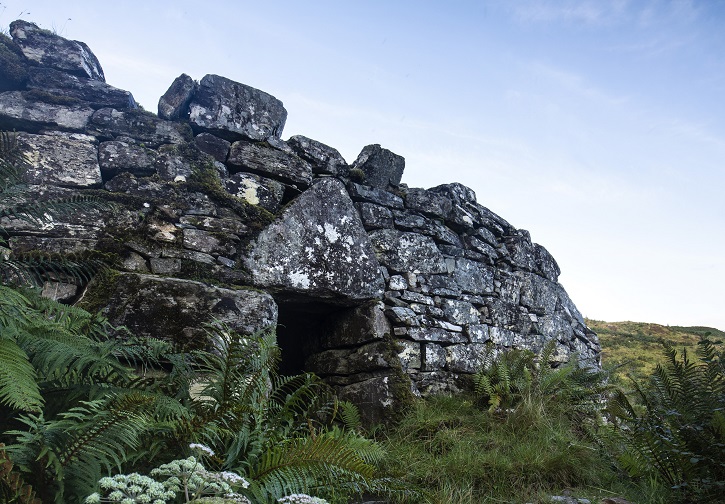 The squat circular towers were drystone constructions, a galleried base supporting double-skinned walls that rose and tapered to support a conical timber thatched roof. The internal chambers, stairways and passages gave access to at least one upper floor level, often supported by a scarcement ledge around the inner wall face. The tallest examples stood up to 10 metres in height and are technically very complex structures. It has been estimated that two specialist masons directing 24 labourers would take 200 days to build a broch, assuming that all the stone had been gathered in preparation. Brochs were built as much to impress as to defend.

Caisteal Grugaig means ‘the fort of the witch’. This may refer to an occupant in historic times, or may infer that the site was thought inhospitable. The broch was built against the slope, its entrance facing downslope. It now stands higher at the rear, its lower sections having partially collapsed. An iconic triangular lintel is set above the well-preserved entrance passage, and a scarcement ledge can be seen running around the inner walls. An intramural stairway rises to reach the upper level, accessed by stepping through a characteristic laddered wall void. As the ground surface inside is rocky and uneven, rising towards the rear, the upper floor may have been the main living space; the ground floor could have been used for storage or to shelter animals over winter.

A previously unconsolidated ruin, it has now been made relatively safe and accessible by light touch drystone masonry repair. The broch was first recorded by archaeological laser scanning, prior to a detailed assessment by a conservation architect. The resulting conservation management record sheets were then used to plan and prioritise the consolidation work. Specialist stone masons followed the existing stonework, enabling intuitive and responsive repair. The work was carefully recorded by an archaeologist, who photographed individual areas both before and after the repair, annotating the record sheets with detailed comments. The interior and exterior wall faces have now been repined, alongside the internal passages, stairway and galleries, stabilising lintels and wall faces where possible. Several large displaced stones have been removed or realigned. However, the work meant striking a balance between interventionist consolidation and authentic character. Areas of collapsed rubble have been retained. The dynamic process of structural decay has been slowed but not halted or reversed. 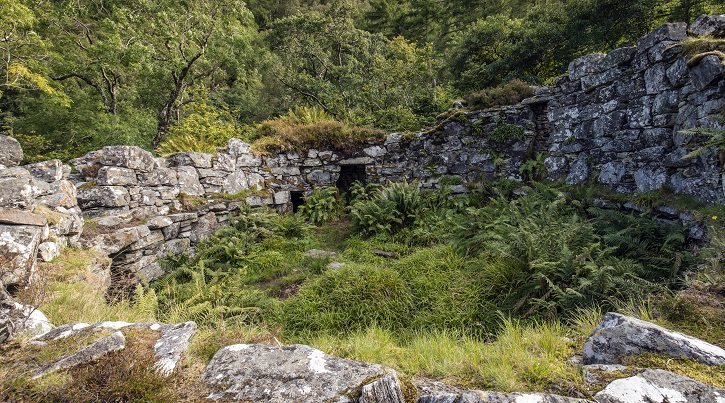 The drystone consolidation has demonstrated what can be achieved by implementing a sensible and flexible approach to conservation. A professional archaeological photographer was subsequently commissioned to document the results. The new photography really helps celebrate the broch and its new lease of life. Caisteal Grugaig has a unique character – its impressive walls maintain a quiet dignity in age that demands respect – and its many special architectural features allow a comprehensive understanding of the period between construction and collapse. Retaining this emotive character and its structural narrative was a really important element of the project, allowing the visitor to enjoy the broch and read its story within the ruins.

Forestry and Land Scotland Archaeologist, Matt Ritchie, will be speaking about the project at Historic Environment Scotland’s DigiDoc Research and Innovation Day and at the Highland Archaeology Festival Conference in October.