The satellite tagged Tweed Valley ospreys have brought us revealing data about the routes the birds have taken when on migration. We have FK8 who favours taking a south westerly route and finishes her journey in Portugal where she has overwintered in the same quarters twice now. Her second migration to arrive in Portugal was a more direct route down the centre of the UK and over the Bay of Biscay to Spain and onto Portugal.

PX1 and PX2 had a different tactic of heading east to mainland Europe and then heading south westerly. PX1 made it to Southern Mali and is still there. 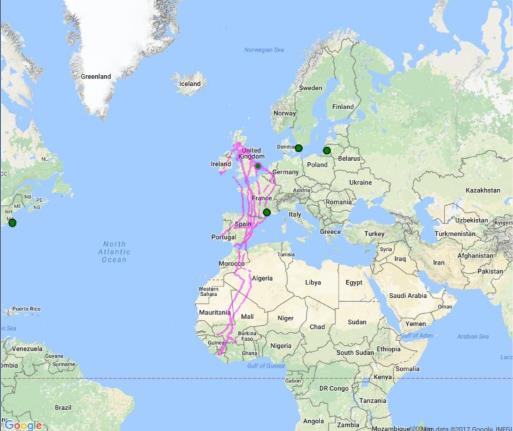 These journeys are interesting in themselves but when the data from all the central and south Scottish tagged birds from last year are used to populate the data map we begin to see trends appear.

Some head in a general south westerly direction but more have taken a route into mainland Europe and then France and the coast of Spain on the western Mediterranean before making the crossing into Morocco and south westerly through Africa.

All the data together 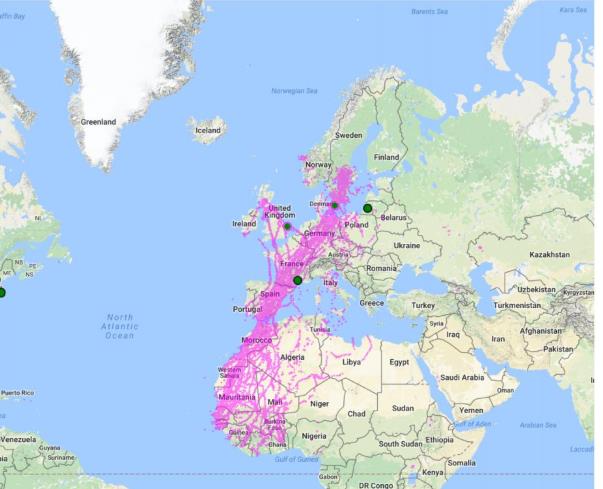 If we then populate the data map with all the Swedish ospreys migrating also, this trend shows a broad pink band of all the osprey movement on the autumn migration moving in a south westerly direction through France and Spain and on to western Africa.

The UK birds’ paths seem to orientate to join the clear flyway route down through Europe; the route that is favoured as it seems by the majority of ospreys.

Features along this route which are generally helpful towards migration are likely to be the uplift they experience from mountainous regions and, from the Mediterranean Sea, prevailing winds which possibly make the flight less arduous.

This data is a snapshot of all the journeys, all made on different dates and doesn’t take into consideration the weather at the time. It is interesting to see the trend in routes which the majority favour. On an international scale this reveals osprey hotspots in terms of importance for migration. 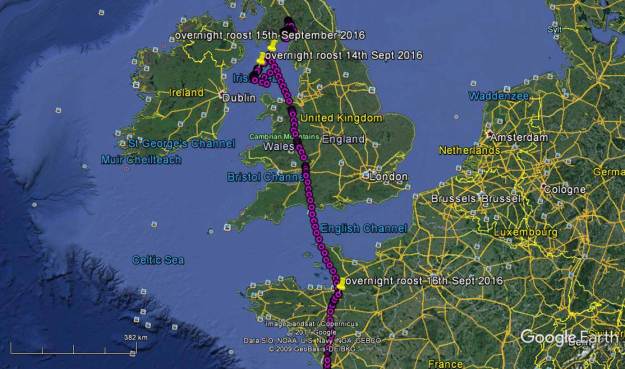 Another individual journey made by a Dumfriesshire bird, PW9 who fledged from Caerlaverock, was surprising, as he headed to the Isle of Man where he spent a couple of days. He then re-orientated himself and turned 360 degrees to cross into Wales and on to France and Spain. His data stopped in Spain and there have been no further records since 20 September 2016.

Another bird from the Loch Lomond region who took a westerly route ended up in Ireland before re-orientating and taking a journey to Portugal where he stayed for winter. 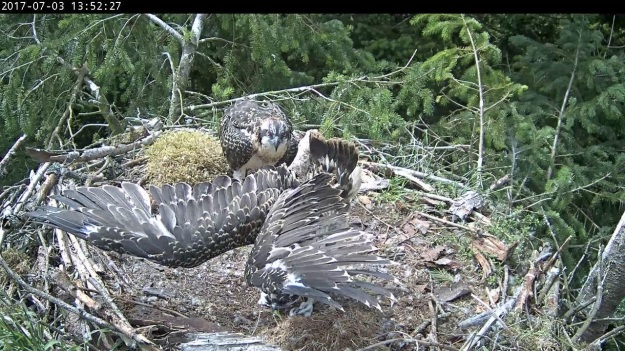 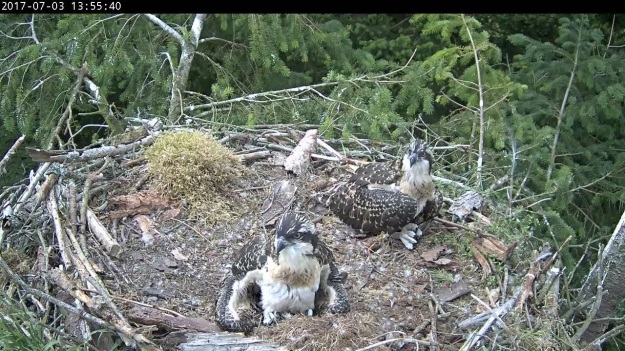 This year’s chicks on Back up nest 2 will be fitted with their satellite tags and identity rings this week as they are almost at the point of fledging. The chicks’ race towards independence has begun and we have seen them left for long periods of time when their parents are away fishing.

They can regulate their own temperature now that they have almost the full complement of feathers. The final breaking through of split feather shafts shows the full wings and tail feathers have almost fully emerged which we can see clearly when they are preening and stretching in the nest. It will only be a matter of a few days before they begin to test their wings for flight. 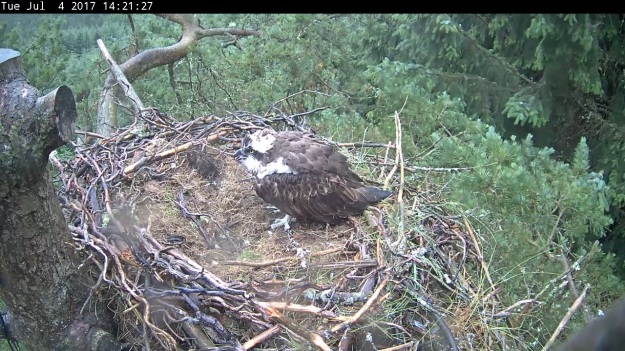 On the main nest Mrs. O cuts a lonely figure most of the time as she waits for SS who still brings her the occasional fish. When he returns with empty talons he gets a loud osprey row and a display of fluffing of feathers and wing mantling to express her displeasure at being left hungry. FS2 has not been seen since last week so perhaps she, as a younger female, is wandering and checking out other areas, much like FK8 is doing in the north of Scotland, regularly surveying Tain, Dornoch and then north to Loch Slethill. 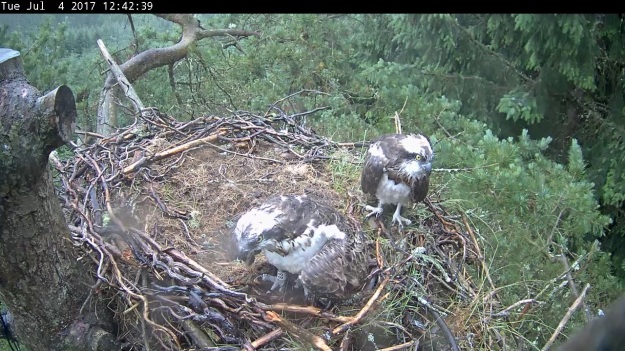 SS has no fish for Mrs. O 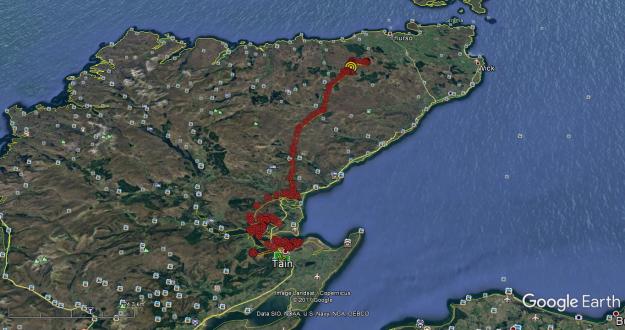 A wander for FK8

Meanwhile, other wildlife happenings this week have been the regular sightings of red squirrel kits at Kailzie Gardens, the stealth camera caught ‘Bent Tail’ the fox and the otter checking the area at the same time. And in the conservatory in the walled garden, there are some fantastic exotic moths from Africa and Asia to try and spot.

Over at Glentress, the return of the bees in their viewing hive is great to watch as the workers tend to Queen Bee, she is easy to spot with a splodge of white tippex on her thorax. 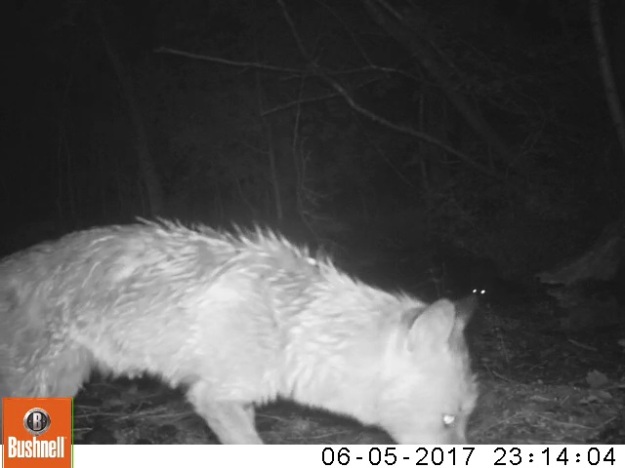 Otter sneaks up behind fox. See the eyes to the right of the fox ear.