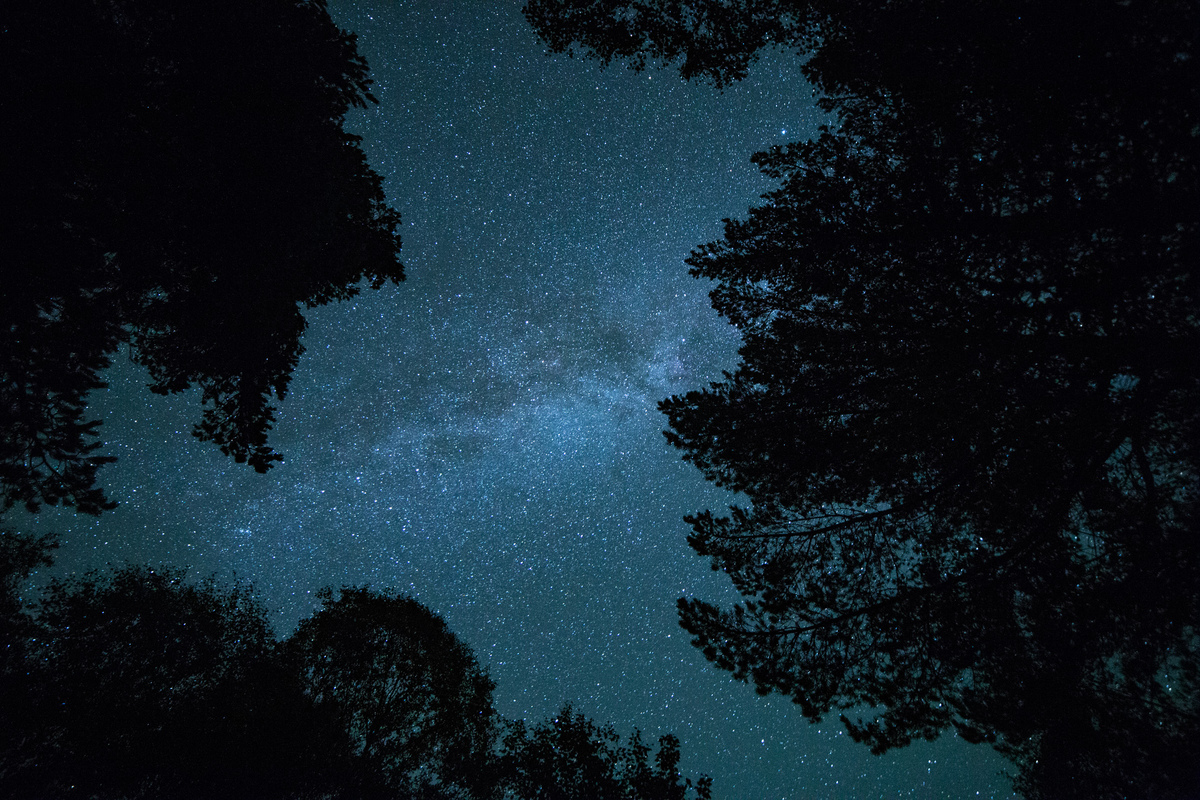 One of the darkest places in Scotland, Galloway Forest Park became the UK’s first Dark Sky Park in 2009. With light pollution in cities impacting wildlife habitats, human health and biodiversity, finding places to enjoy the majesty of the night sky can be a challenge.

For visitors to Scotland however, Galloway's Dark Sky Park, easily accessible from our Visitor Centre in Kirroughtree, offers the perfect chance to stargaze. Whether you’re an experienced telescope owner, night-time photography enthusiast, or just keen to uncover the night sky’s mysteries, the park is for you. Here, you can spot over 7,000 stars and planets with the naked eye. You can even see the bright, silvery band of the Milky Way, often hidden by the lights of the cities.

Where else can you see the stars?

Forestry and Land Scotland’s in-house astronomy expert is Keith Muir, one of the architects of the Dark Sky Park project. Here he talks us through the history, importance and legacy of the UK’s first and finest natural stellar observatory.

As a beginner, what is the easiest constellation to spot in the night sky?

The easiest constellation in the Northern Hemisphere is the Plough or Big Dipper, also known as Ursa Major (The Great Bear). It is also the constellation that allows us to find the northern or Pole star, by drawing a line from the two most right hand stars of the pan or ladle and following it upwards.

Where is your favourite spot in the Dark Sky Park?

There are a few to choose from, but personally it has to be Knockman Wood on the outskirts of Newton Stewart. You have to get out and walk to the most exposed point. From there you look directly south over the Solway Firth with 360° views. It’s amazingly peaceful, and on a good night, stunningly beautiful.

Slightly easier to access is the Queen’s Way. There are a number of car parks you can pull off in to including Clatteringshaws Visitor Centre. It’s a dark road with big skies so sit back and enjoy. Remember, it takes 20 minutes to get your eyes acclimated to the dark.

How does the Sky Quality Meter system work?

The SQM system is used to measure the amount of light that enters a specific area of the equipment. The reading indicates how much light from the direction in which it is being pointed hits the Earth’s surface, using measures from 0 – 25 SQM. If you were standing right next to the sun you might get a reading of 0. If you were standing inside a black box, inside a sealed metal box, in the middle of the Pacific, you might get a reading of 25.

In real terms, a city such as Edinburgh or London will have a reading in the region of 16. That may not seem very low given the amount of light, but for every number you go up on the scale the darkness is multiplied by a factor of 5. So that means that with the darkest reading in Galloway Dark Sky Park of 23.6, in the very heart of the park, it is actually 38 times darker than the city skies. It is why in Galloway Dark Sky Park we can see the entire curve of the Milky Way, while in London you will be lucky to spot 3 stars in the constellation of Orion.

How did Galloway Forest Park become the UK’s first Dark Sky Park, and have other places followed suit?

During the International Year of Astronomy in 2009, we were asked if we felt it might be a good idea to become a Dark Sky Park. The designation makes us unique in the south west of Scotland, and pulls people into the area over the autumn and winter months, when traditionally the tourist season becomes quieter.

We were the first Dark Sky Park outside the United States. It was a tough job sorting out their terminology to align with the UK and European systems. It also took some persuading of the small number of private owners dotted around the forest park, but all thankfully agreed to comply with the designation terms.

With the benefits to the environment like reductions of energy use, improved nocturnal habitats for animals, and improved human health, it isn’t  hard to understand why our launch was followed by the creation of over 40 new dark sky places around the globe. It is also the reason Galloway hosted the first European Dark Sky Places Conference in October 2017. It’s a growing designation that is more than just about light pollution. It's also about how we live our lives, and the bigger picture of where we live and how that affects the natural environment. 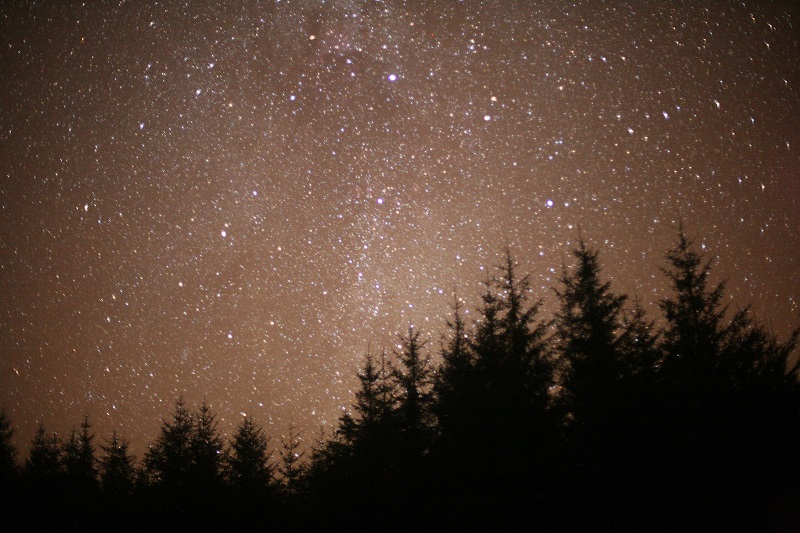 What is the best time of year to come to the Dark Sky Park if you want to spot some meteors?

The vast majority of meteors are only the size of a grain of sand. The larger fire balls might reach the size of a fist, but are more likely a large pebble. Some great showers for the UK are the Perseids in August and the Orionids in October. The names are given to indicate where the meteors appear to originate - from what constellation area of the sky.

In January, we see the Quadrantids shower, in April it’s the Lyrids. May sees the Eta Aquariids, followed by the Perseids in August, and the Draconids and Orionids showers in October. In November we see the Leonids, followed by the Geminids and the Ursids, both in December. The best time to visit is for the August Perseids, as it is warmer, and we have amazing skies to observe them; and the Orionids in October, as it is dark enough to get a good show but not yet as cold as it is in mid-winter.

What do the Dark Sky Rangers do?

The Dark Sky Rangers were created to become the front face of the Dark Sky Park and the Galloway & Southern Ayrshire Biosphere. All the rangers are freelance, and can be contacted at any time to arrange an event for individuals, groups or businesses. All of them have slightly different styles and interests, from photographing the night sky to telling stories of the Greek gods, or creating rockets for kids to enjoy. They offer a resource that is accessible, and allows visitors to understand better what space is all about.

Why is it important to learn about stars and constellations – what can they teach us?

We live in a time of great change. Technology and knowledge are improving and expanding at a rate greater than at any other time in human history. Yet our planet has not changed, in respect of where it is and what it is. Our ambition is unrivalled, and yet not fully realistic given the issues we have. Studying the stars begins to put everything into perspective.

An image that I found extremely helpful with that, taken by NASA, is called The Day Earth Smiled (above). On that tiny wee blue dot are all the friends you know, all the history we have been taught. It is the source for everything that has ever been built and will be built. It is the living, breathing space that billions of humans and billions of life forms rely upon to exist. And yet we are blundering our way through with consumerism and greed as the main reason for existence.

This picture was taken from one of the planets in our solar system that we already know cannot sustain life. Our nearest potential life-bearing planet is at least 4.3 light years from Earth, which makes it currently completely out of reach in our lifetimes. Not that I want to scare people, or sound like a doom merchant. To study the stars is to celebrate our existence, to marvel at our place in the universe, while at the same time realising how special we and our planet are in the vastness of space.