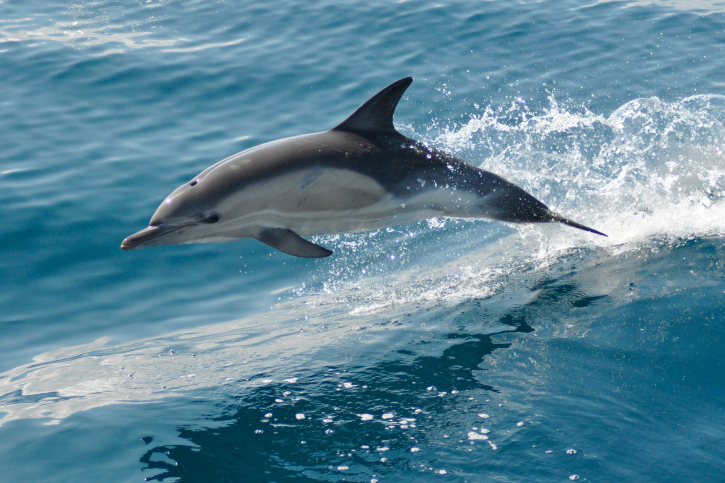 When you visit the forest you know what to expect: trees, spectacular views, woodland wildlife. But how about leaping salmon? Or dolphins? Or even a minke whale? Not what you’d expect from your typical woodland wander. It’s National Marine Week, and there’s no better time to celebrate the flippery creatures that live in our rivers and seas.

First up, salmon. Young salmon live in freshwater rivers and pools until they’re between two and four years old. Then, they leave home and go out into the world (aka the North Atlantic). When they’ve reached adulthood, they then return to spawn, swimming upstream via a seemingly endless number of waterfalls to the exact stretch of river where they hatched.

Want to see these magnificent creatures in action? Late summer and autumn is the best time to see them, with dedicated viewing places at Rogie Falls near Inverness, and the Falls of Shin in Sutherland.

It’s not just Scotland’s rivers which offer great wildlife viewing – there’s plenty to see in the sea too. There are over 24 species of cetacean recorded in western Scotland alone. Some of these species live here all year round, such as the harbour porpoise, while some journey over to visit for the summer months, like the minke whale.

There are some great places to try and spot these lovely animals: head out west to Fishnish on the Isle of Mull, or Kylerhea on Skye. The wildlife hides at both locations are great places to look for dolphins, harbour porpoise, and a range of other sea creatures.

If you’re really lucky, you might even spot a basking shark, the second largest fish in the world. These plankton loving giants can grow up to a whopping 12 metres, and can usually be found swimming with their gigantic mouths open, filtering up to 2.5 million litres of seawater through their gills each hour.

Sealed with a kiss

Two species of seal live permanently in Scotland: the grey seal and the common seal. These playful creatures can be spotted along Scotland’s coastal woodlands as they lounge on beaches and rocks, or in the sea as they go fishing.

Seals can be spotted in all seasons, but there are certain times when they will congregate in larger groups, making them easier to spot. Grey seals mate and pup between October and December then moult from January to April. Common seals will usually breed in June and July, before moulting shortly after.

Not sure where to spot these curious creatures? The Garbh Eilean Wildlife Hide overlooks the shore of Loch Sunart and several rocky islands, which are favourites of local seals. Tentsmuir Forest also offers good viewing opportunities, as you stroll over sand dunes and between tall trees.

A new porpoise in life

Sometimes seeing the unexpected is good. It makes things a little bit more exciting. So next time you take a trip to the forest, make sure to keep an eye on the water, and not just in the trees!