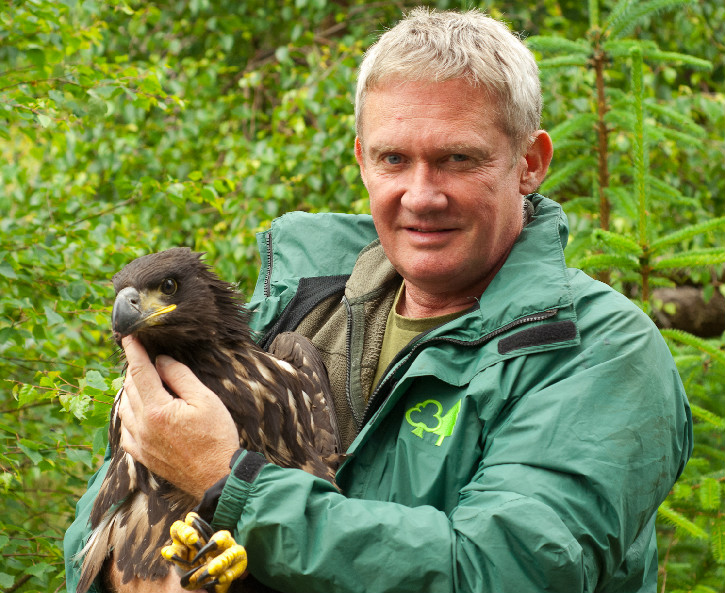 We are proud that our forest management helps wildlife species to flourish. One of our biggest success stories is the white-tailed eagle, once extinct in Scotland but now living here again after successful re-introduction programmes. The west coast releases and the success of the birds in places such as Mull, Skye and Argyll has been a fantastic success story but the East of Scotland project is perhaps a little less well known.

The East Scotland Sea Eagle Project brought chicks over from Norway to Fife between 2007 and 2012, and we are now seeing the released birds produce their own chicks.

Together with partners like Scottish Natural Heritage and the RSPB Scotland, we protect forest areas that are part of the eagles' territories, and make sure their nesting sites aren't disturbed.

There are now 100 pairs of white-tailed eagles living across Scotland. One of the latest eaglets to hatch in a Fife woodland has been tagged and ringed and is now taking its first flights away from the nest.

This year’s chick is thought to be a male (from the overall size, the shape of the head and the size of the feet). The bird has also been fitted with wing tags so it can be identified visually: the chick is White L with its parents known as Turquoise 1 and Turquoise Z after their wing tags. 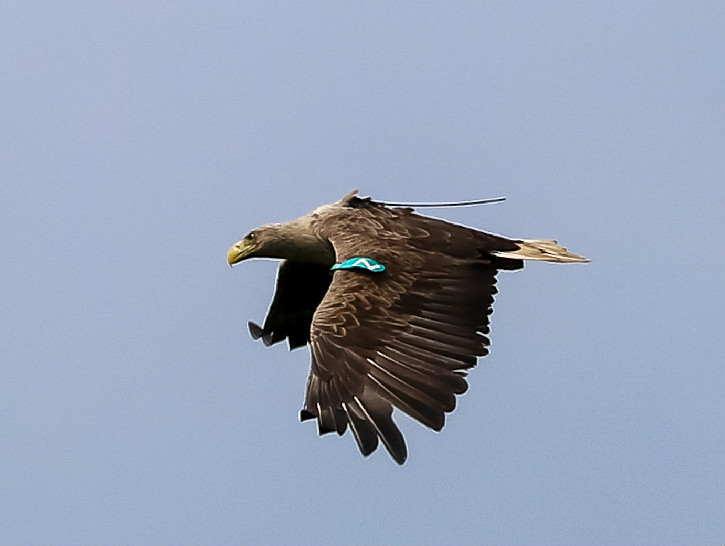 The parents are already a regular sight around Tentsmuir Forest in North East Fife where they come to feed along the coast and on the nearby Eden and Tay Estuaries.

Both are east coast release birds that came from Norway as chicks and were housed in the aviaries on FES land before being released in 2009.

The nest tree was climbed by FES staff, who carefully caught the chick and put it in a soft, lined bag before bringing it down to the ground.

Once out of the bag the bird was fitted with a hood. This acted as a blindfold, which reduced stress to the chick and made it safer for those fitting the ring to its leg, its wing tags and the satellite tag which tracks its movements. The data from the satellite tag helps us to learn more about the species and to check on its safety. This is the fourth year this pair have successfully raised a chick.

This year’s chick was very feisty and lively, and we have high hopes for it so will aim to provide updates on it once it starts to go and explore different parts of the country.” 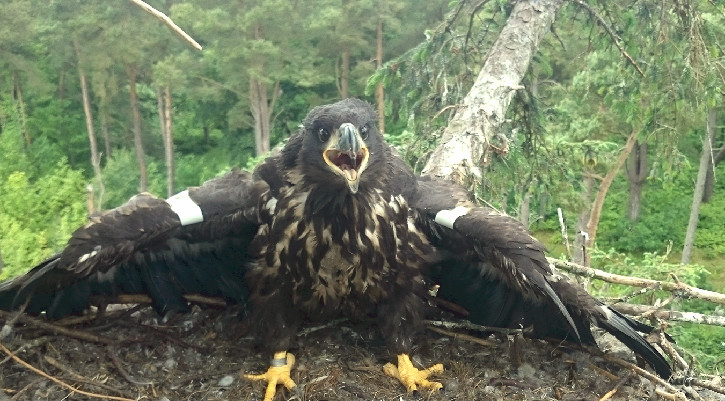 The purchase of the satellite tag was funded supplied by Blair Drummond Safari Park. It was one conservation initiative pushed through by education officer Dave Warren. The current conservation strategy at the park is largely shaped by the animal-keeping staff, who on their own initiative have recently assembled a committee that facilitates their passions for in-situ conservation and directs funds and other resources to the most suitable projects. This new conservation arm is aptly named ‘Link to the Wild’.   Instead of simply fundraising for the more obvious larger animal charities, the keepers typically also elect smaller projects where a little will go a long way. All donations go straight into the hands of field ecologists, or are used to buy essential equipment for small projects that conserve vulnerable species.

Dave said: "Monitoring raptors began with a childhood infatuation with falconry. I've been very fortunate to work with some impressive and inspiring hawks. In time, my concerns for the status of certain species in the wild has begun to outgrow my exuberance for merely training them in captivity. Being able to monitor the eagles, learn about their ecology, understand how they interact with their environment and help protect them from persecution is a massive privilege."

It takes a lot of work to plan for the success of species and that includes countless hours of volunteers’ time.

Over 30 volunteers help by watching the nest every day to record behaviour and to ensure the birds don’t get disturbed. They also help with tracking the birds, and leading events and guided walks, as well as being champions in the local community for these magnificent birds.

The volunteers are managed by our partners at RSPB Scotland, and it is this joint working that has been a key part of the release and ongoing monitoring of the birds. Richard Tough is one of the volunteers who dedicates hours of his time every week to helping make the project a success: "I carry out a wide range of activities, from tracking - which gets me out and about, to nest watching - where you can spend 4 hours chilling, but also observing and recording eagle behaviour. I also attend engagement events where we help the community better understand these magnificent birds.

"Volunteering gives me a balanced healthy lifestyle, allows me to meet new people, learn and share knowledge about the wonderful abundance of wildlife we have, but most importantly it allows me to contribute to educating the community on the importance of nature and particularly the role of our white-tailed eagles.

"What is most rewarding is hearing the interest that people of all ages have with the project and wildlife, especially the children who seem to know more about nature than I do!"

In addition, to managing white-tailed eagles in the forest, Forest Enterprise Scotland is an active member on the steering group of the White-tailed eagle Management Scheme.  Currently, this group is producing a national management plan for this species.  The plan will include a list of management actions that can be employed by land managers, allowing them to reconcile white-tailed eagles with other objectives, such as livestock production.

"Reintroducing species to modern landscapes is a complex process and the most crucial aspect of a successful project is engagement with stakeholders.  In the case of white-tailed eagles, we are working hard with farmers and other land managers to make sure this magnificent bird can thrive in Scotland without having a negative effect on rural enterprises."