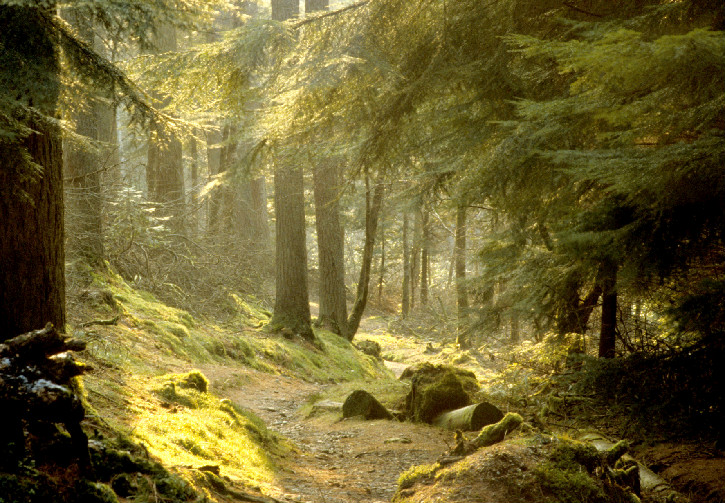 Our forestry work is planned to make sure the woods provide the best possible conditions for wildlife. We take special measures to look after some species, such as protecting exclusion zones around osprey and golden eagle nesting sites. We even make sure that the trees along salmon rivers cast the right sort of dappled shade: fish are part of the forests' wildlife too.

One of our biggest success stories is the white-tailed sea eagle. These birds became extinct but are now living here again after a re-introduction programme that brought chicks over from Norway to Fife.

We're working closely with partners like Scottish Natural Heritage and the Royal Society for the Protection of Birds to protect forest areas that are part of the sea eagles' territory, and make sure their nesting sites aren't disturbed.

There are now 100 pairs of white-tailed sea eagles living across Scotland. One of the latest eaglets to hatch in a Fife woodland has been tagged and ringed in advance of its first flight away from the nest.

This is the third successful nesting attempt for this pair, who have fledged a single chick each year since 2013.

Graeme Findlay, for Forestry Enterprise Scotland's team in Tayside, said: "These magnificent birds are known to travel far and wide as they hunt for food and look for a suitable place to claim as their own. Now that this chick has been fitted with a GSM transmitter, its movements and its health can be monitored, giving researchers a wealth of valuable information."

Rhian Evans, RSPB's East Scotland Sea Eagle Officer, said: "Thanks to the dedication of more than 30 RSPB Scotland volunteers, the progress of this nest has been thoroughly documented throughout the season, and the nest protected from disturbance. We are delighted that the chick has made it through to fledging despite a challenging season for many other species.

"This chick is one of five to fledge across the East of Scotland this year, in what is a milestone year for white-tailed eagles - the 100th Scottish pair was announced this year in Orkney, and in a year when we celebrate 40 years since the reintroduction program began."

We look forward to following the progress of this newly fledged youngster as it explores new territory over the coming months.

To mark this special anniversary year and the successes of the reintroduction in Fife, a Sea Eagle Celebration Day will be held at the Burgh Chambers and Gardens in Tayport from 12 pm on Saturday 22 August. Everyone is invited to come along and take part in some fun activities, crafts and a BBQ.