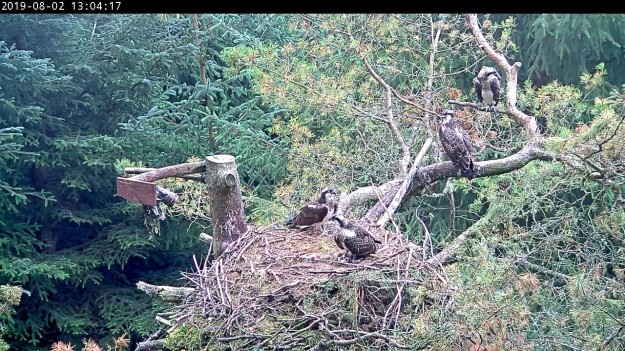 Mrs O and her three young but very grown up ospreys.

All three young ospreys from the main nest are now flying and the good news is that they are returning to the nest to feed. Mrs O and SS are still here and SS is still bringing fish back for the young offspring, but there is a definite shift in the attitudes and personalities of the three young birds. By far the most assertive is 302, the young male. He was the underdog of the brood while growing up, but he is most certainly making up for lost time now. 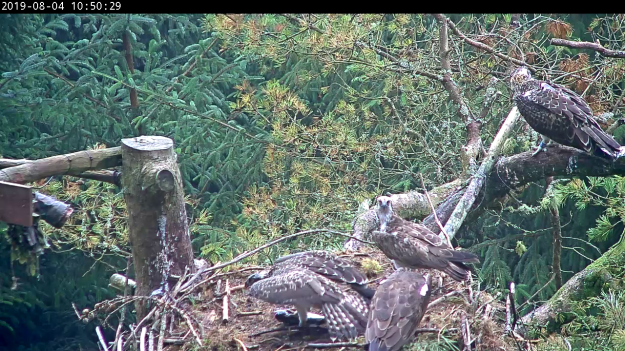 302 takes the fish as SS looks straight into the camera. Mrs O is in the foreground with her back to camera and 301 is on the perch. 303 is not at the nest.

Each fish delivery from SS is swooped upon by his son who claims it for himself, mantling over the prey and turning his back on his sisters. The two sisters are very much at odds with each other as well. The rivalry tips over into all-out battle at times, as we witnessed on 1 August.

Male osprey 302 had seized the advantage and was feeding on a fish, with his sisters in the background, when an almighty barney broke out between them all. It started when 303 made a move towards 302’s side of the nest. This ignited a furious reaction from 301, who flew at her and with wings outstretched and talons flying, trying to push her sister from the nest.

She fought back admirably and the two birds tussled back and forth, teetering on the edge of the nest for quite some time. Then 303 pushed the advantage and started to force her way back into the nest area, wings outstretched, jumping up as they pushed and shoved each other. Meanwhile young 302 kept his head down, stayed out of trouble and ate the fish. Like father like son! 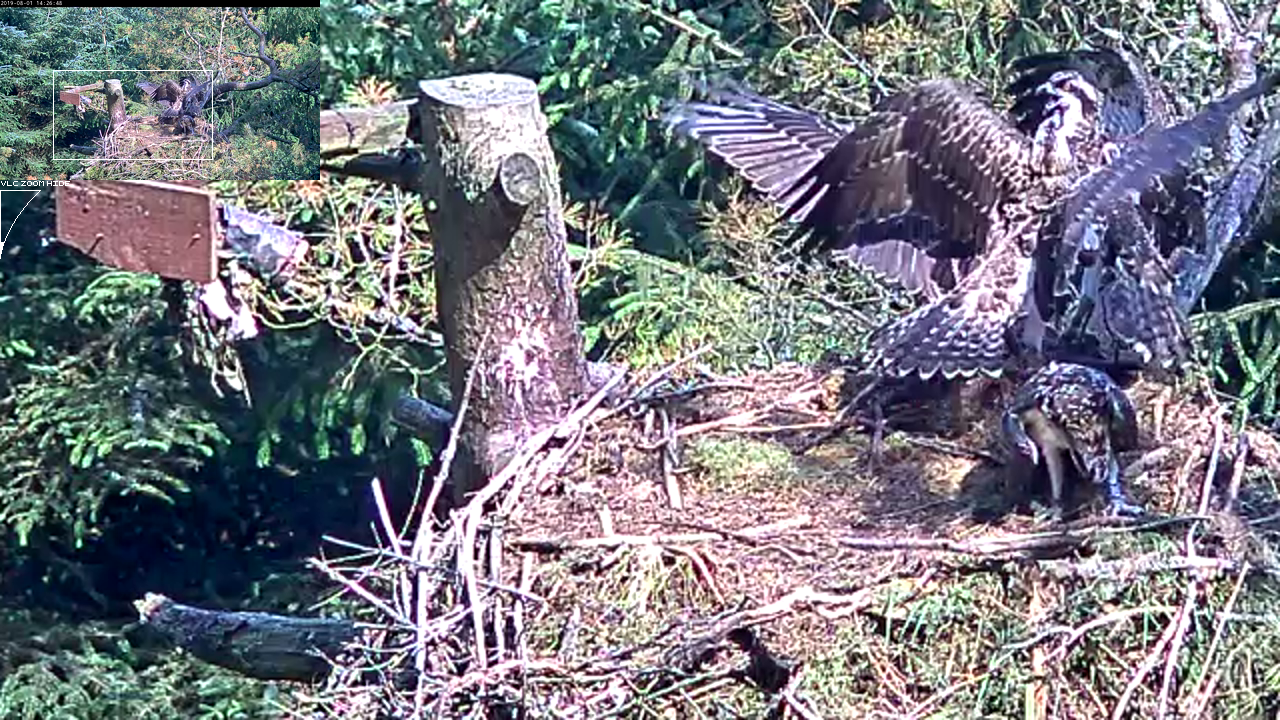 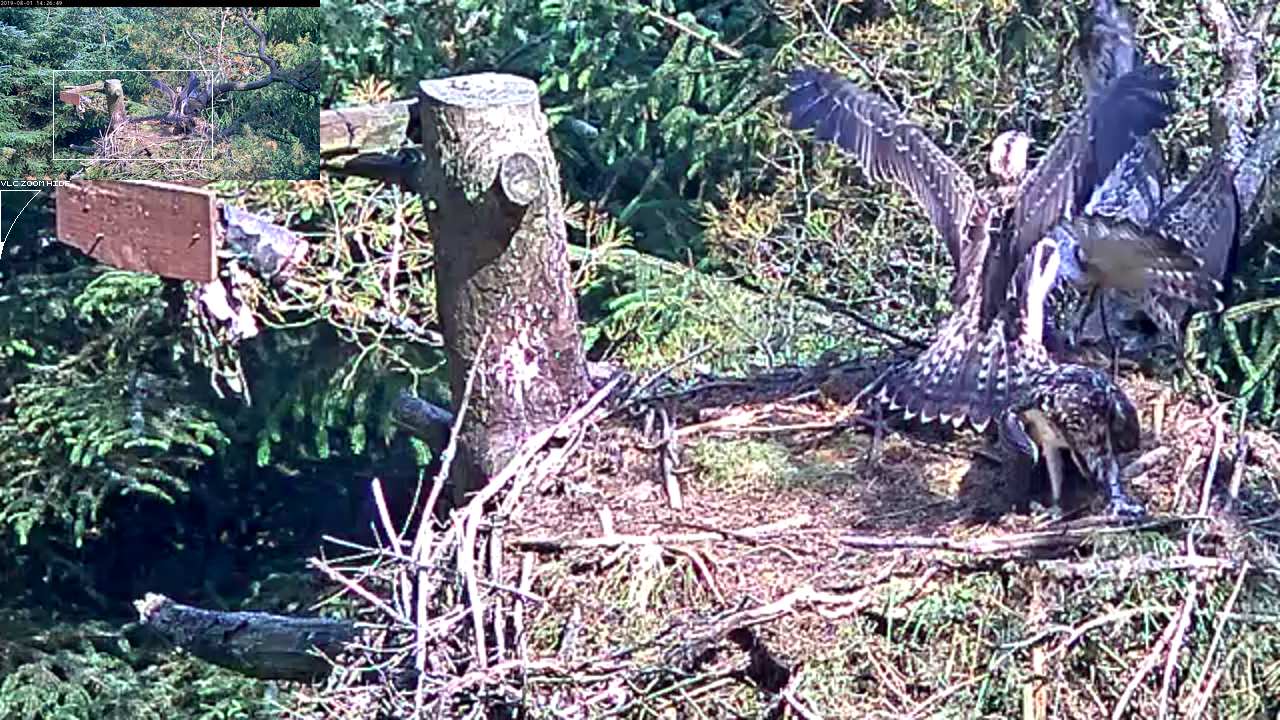 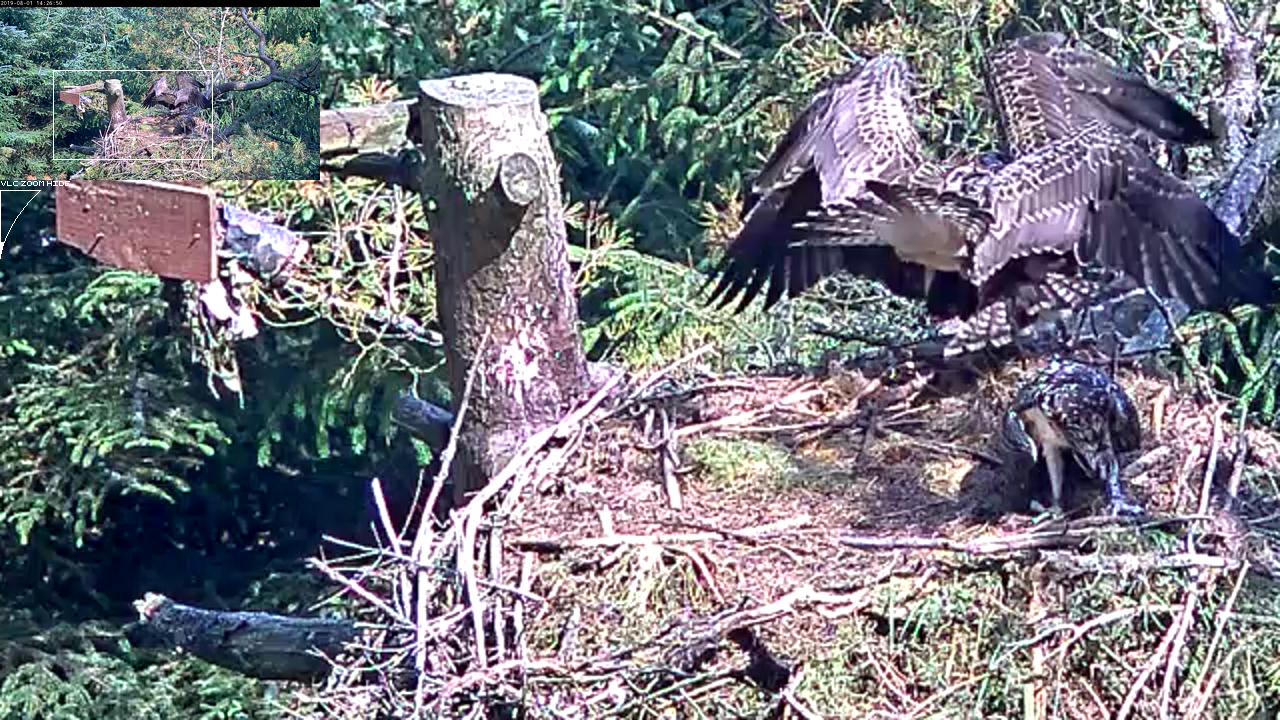 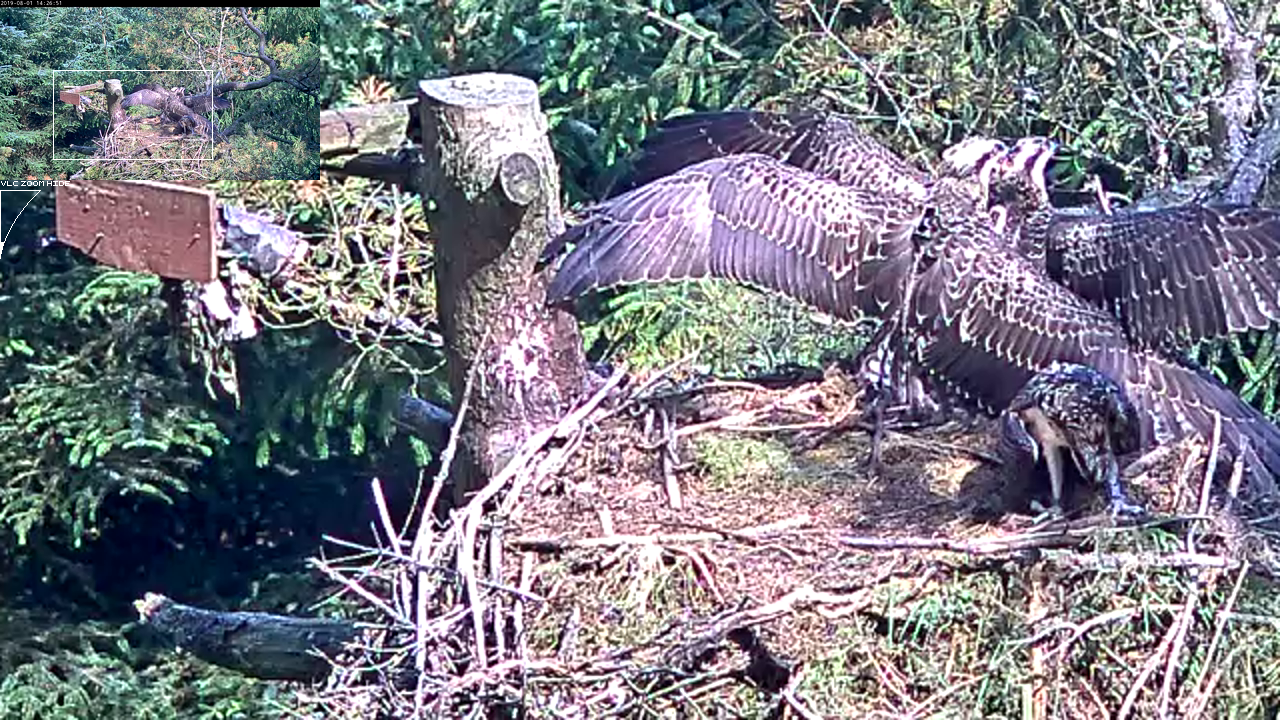 Squawking and driving off 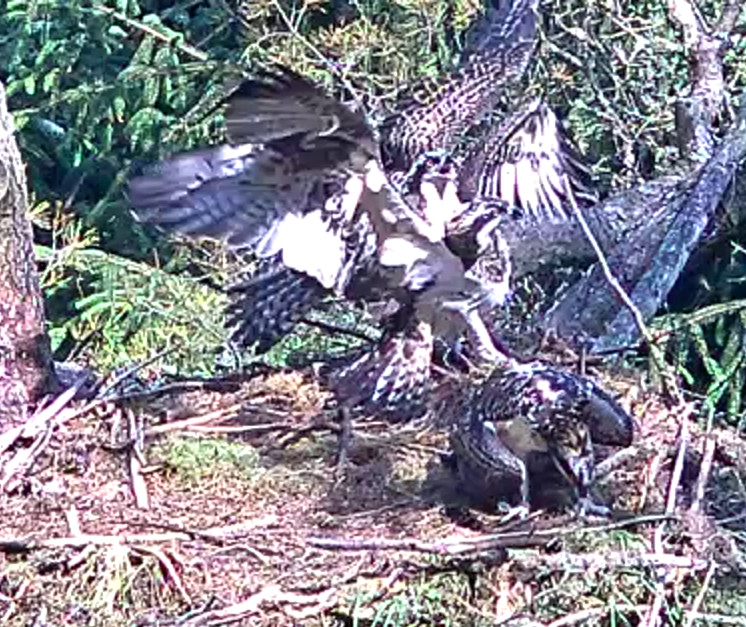 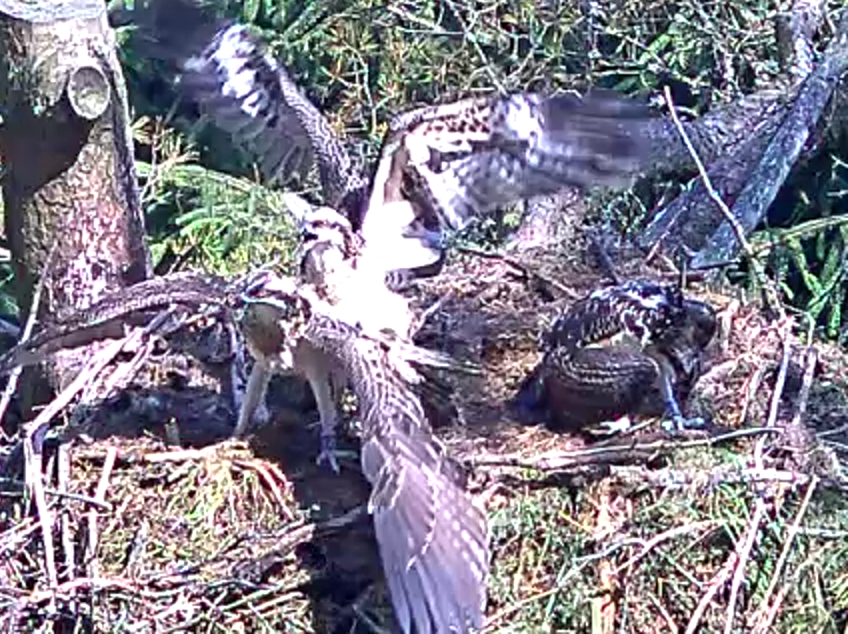 Not getting pushed out fighting back 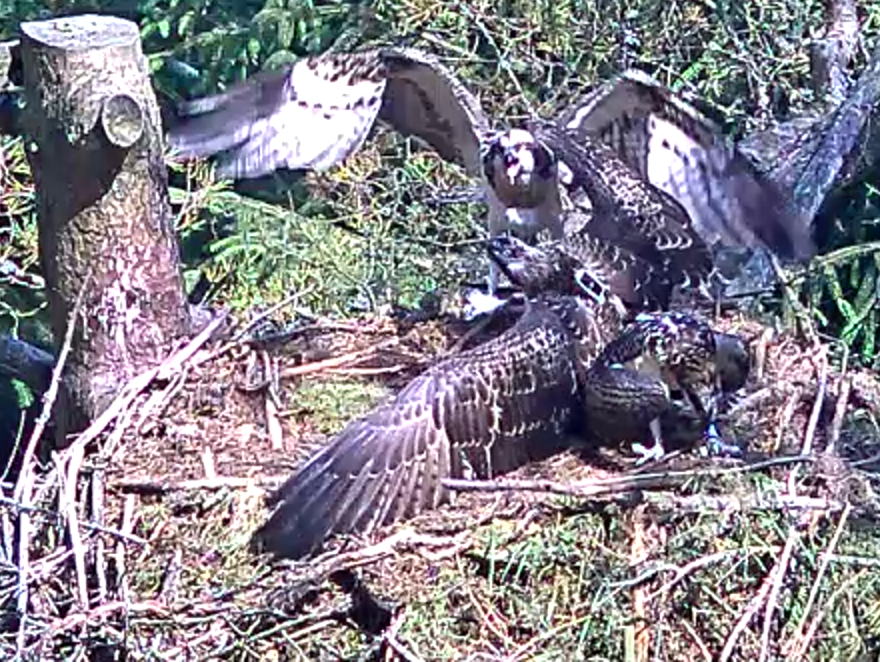 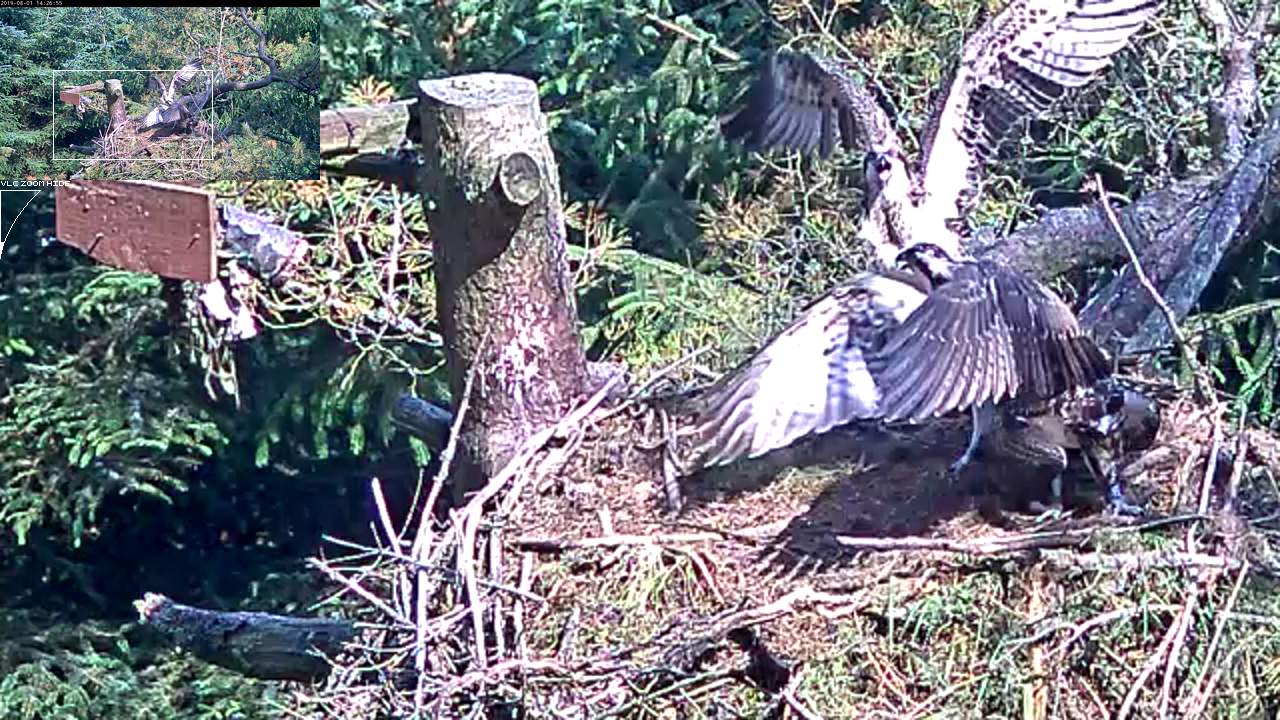 Sisters battle while the son eats the fish

Most often, we see 302 and 301 sitting at the nest together waiting for food. Attempts to join them by 303 are thwarted with clumsy landings, aborted at the last minute, as she overflies the nest.

There is a very definite air of fighting for survival between the young birds. Time is drawing near for their mother to leave them and soon they will be alone to fend for themselves. The feisty attitude of 302 and 301 stands them in good stead but 303 needs to up her game if she is to survive. She needs to deal with rivalry, defend herself and feed herself. With a little more experience, and the sharp edge of hunger gnawing at her core, she will no doubt learn fast as her survival instinct kicks in. She had it easy on the nest while growing up, with fish delivery by her dad, followed by Mrs O gently feeding her, but there is no such luxury now. If a fish is brought in, it is a race to be the first to grab it. So far, 302 has used this to his advantage and 303 has been a bit slow.

All three birds are not always present on the nest together as they are flying and exploring their surroundings. So it was good to see that SS delivered a fish to the nest when 303 was the only young bird there on Monday 4 August. She got to handle the whole fish without competition, Mrs O sitting up on the perch above her.

Each meal time is now a contest when all three are present and there is an element of survival of the fittest. Overall they seem to be very feisty, fit and healthy. Hopefully they will do well when the time comes for them to leave.

Encountering rivalry, competition and territory battles at this young stage is not a bad thing on their journey to adulthood. Once they are adult birds, they will all too soon have to deal with contests to win a mate and nest sites, if they are to be successful and breed in future years. 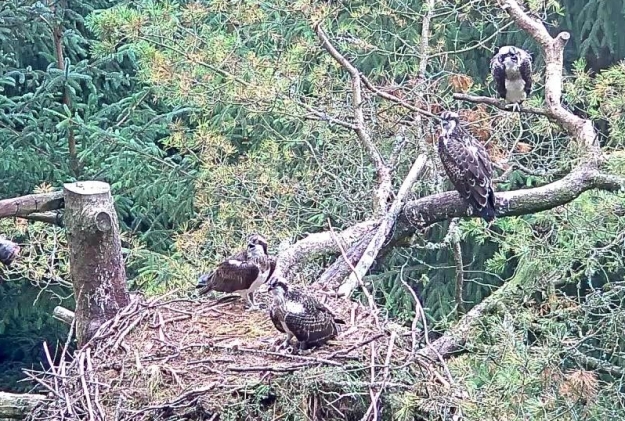 Mrs O and her young chips off the old block – just look at those facial expressions! Reminiscent of Mrs O and her squawking days.

The satellite tags so far have illustrated that although both sisters have flown from the nest site, neither have ventured outside of the protective environs of their forest home. The greatest distance achieved from the nest so far has been 800m. But both have taken little forays in all directions around the area, not too far from the safety of the nest location. 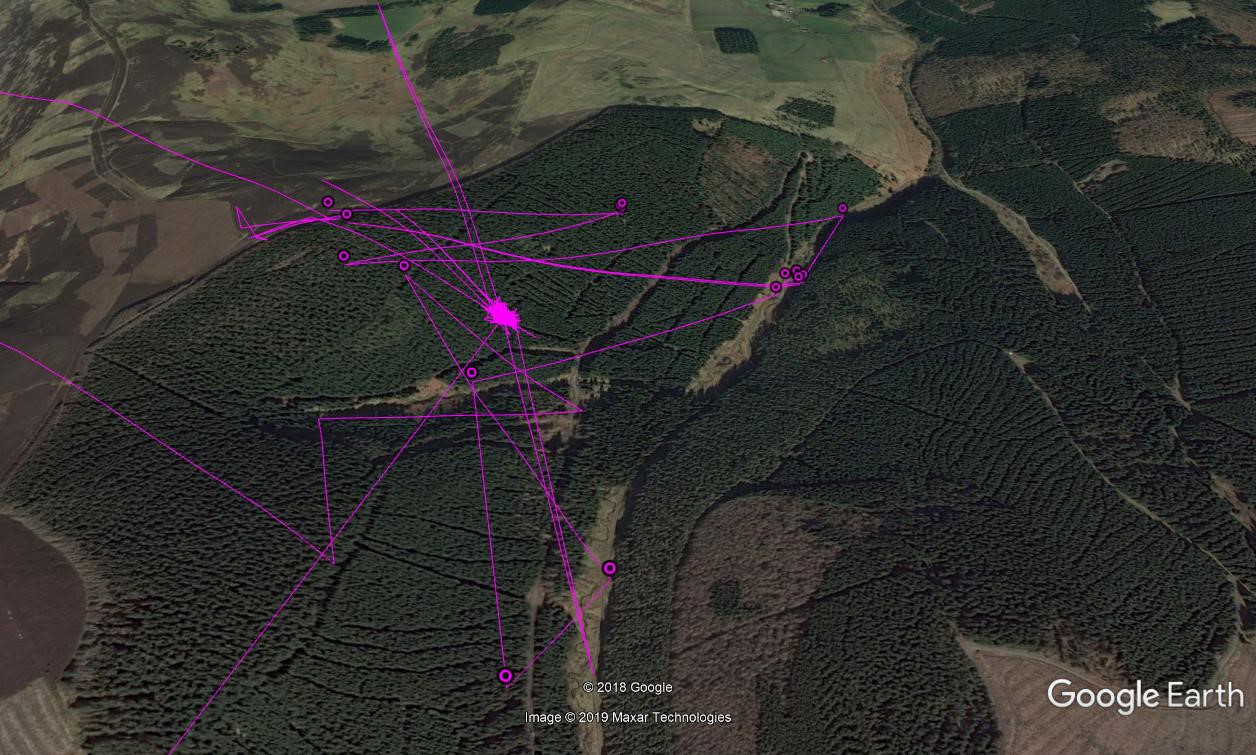 Flying but not too far 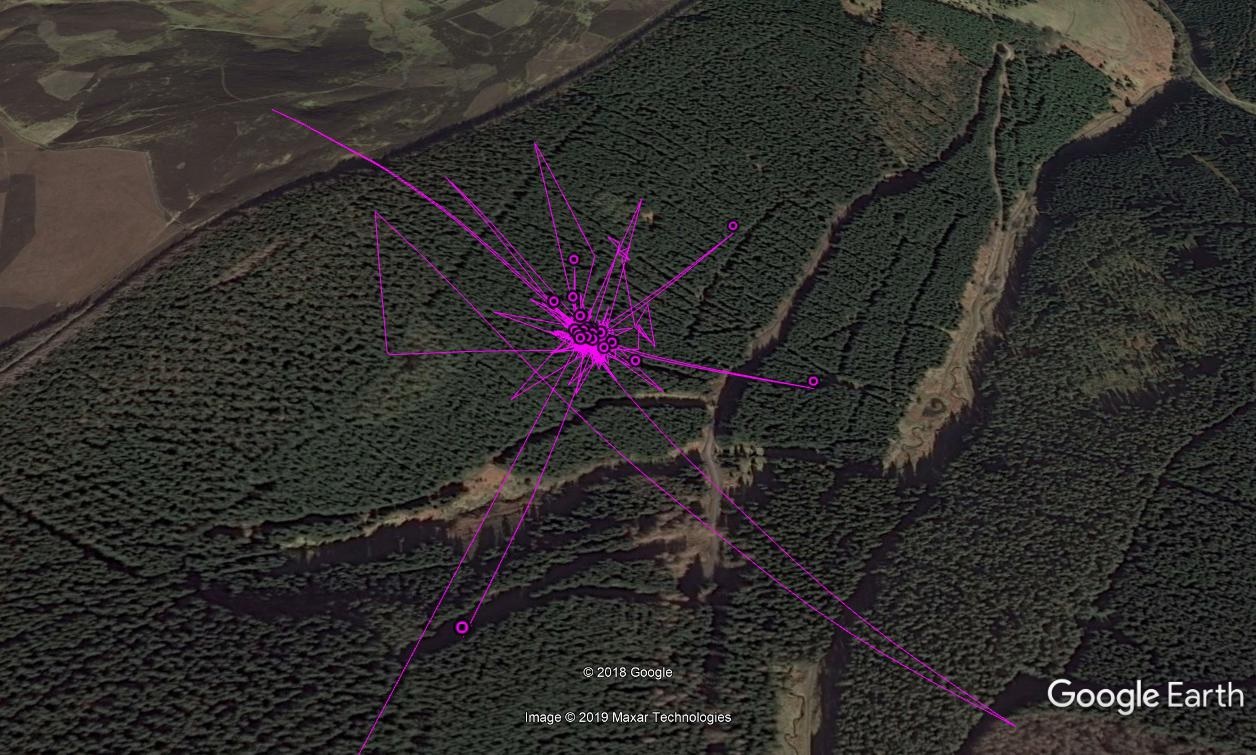 Staying within the safe boundaries of the forest

A cheeky little jay popped onto Mrs O’s favourite perch on Sunday to see if there were any scraps to eat .It was a short visit and he soon left.

The osprey nest tree is a Scots pine, and the pine needles have turned brown, with the crown showing signs of die-back. The tree doesn’t look in very good condition and it has held this nest for 22 years. At the end of this season the Environment Team will take a look at it to assess its condition for next year. It may require some struts and support but it looks like a new site may have to be created for the main nest pair. 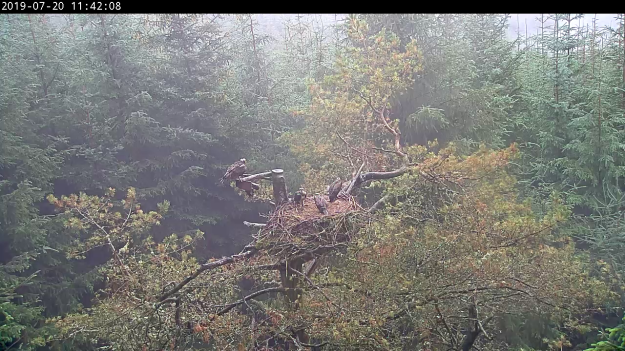 The pine needles on the nest tree are yellowed and it looks like the tree is dying.

We’ve made a short film of the highlights from the 2019 season. Take a look here or click the image below. Thank you for following the journey of our young osprey family!