Mrs O with her 'Easter egg'

Towards the end of last week, it was becoming clear that Mrs O was due to lay an egg at the main nest. Since her arrival back to the territory, she had been with her partner, regularly mating in the nest. A concerted team effort saw them build the nest up in readiness for the new arrivals, and then line it with copious, comfortable-looking, soft, dried moss.

Come Easter Sunday, the obliging Mrs O decided to make it memorable this year, and laid her first egg of 2019. Needless to say, this was a very happy day in the osprey watch hut for volunteers and visitors. Mrs O and SS sat in the nest with their prize egg just as crowds of children were running around Kailzie Gardens, indulging in their own egg hunts. 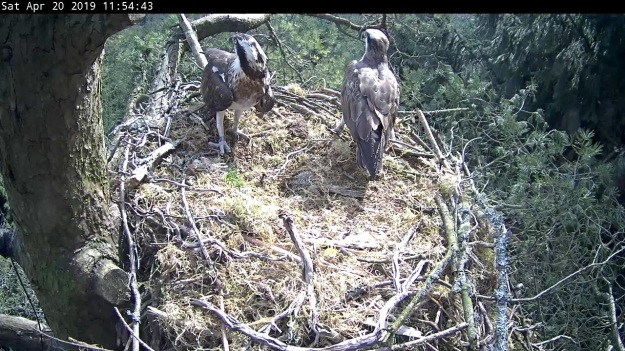 Prior to the egg being laid, the happy couple had been having a few spats over the quantity of fish being brought in. SS had arrived on Saturday with a fish but did not want to share it. The expectant mother was not pleased and was eventually quite forceful. She took it from him and went up onto the perch to eat. After tucking in for about half an hour, she flew back down onto the nest with it. A disgruntled SS tussled with her to take it back and then flew off with it. 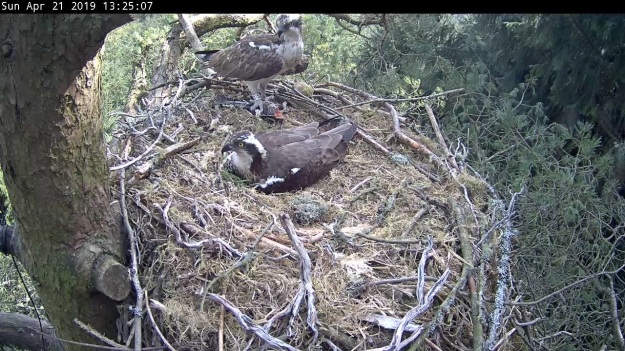 It was a different story on Easter Sunday, however. A very relaxed Mrs O was sitting on her newly laid egg when SS came in with a fish. They were not even fazed when a cheeky little jay popped into the site and hung about looking for scraps for a while before flying away. 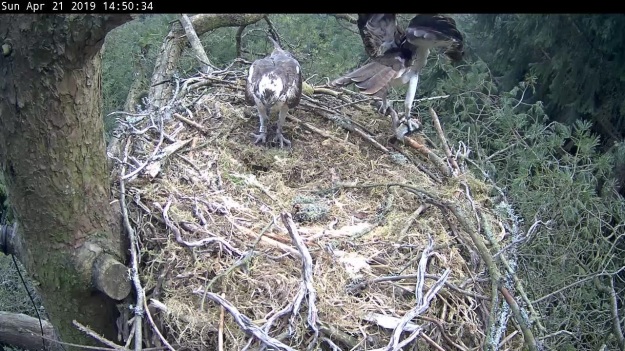 SS sat up on the perch eating the fish, until he decided to drop back down into the nest. Mrs O took her turn to take the remaining fish up on to the perch, while SS took up position sitting on the egg, carefully curling his talons so that he didn’t accidentally pierce it. 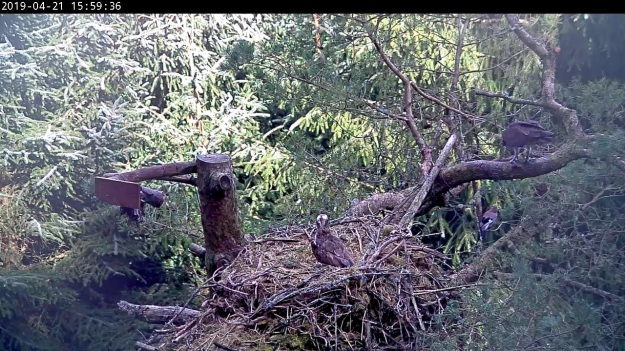 The jay returned and took a position below Mrs O, where she was feeding on the perch. He was probably hoping that she would be a messy eater, but every morsel torn from the fish was devoured by Mrs O, and the jay soon left, disappointed. 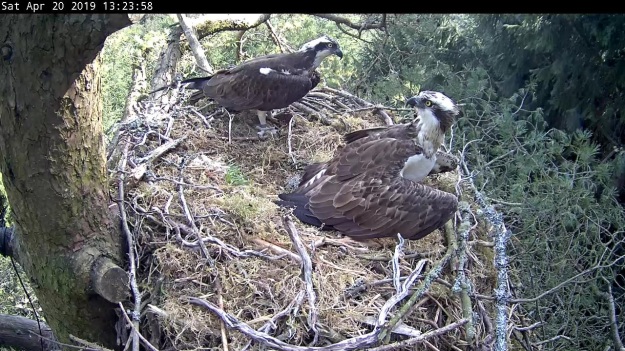 Also on Sunday, SS fell asleep while he was sitting in the nest. It is a rare sight to see the ospreys completely asleep, as they remain alert to danger or disturbance, but SS had his eyes tight shut, showing his feathered lower eyelid. Perhaps it was the warm weather inducing fatigue. 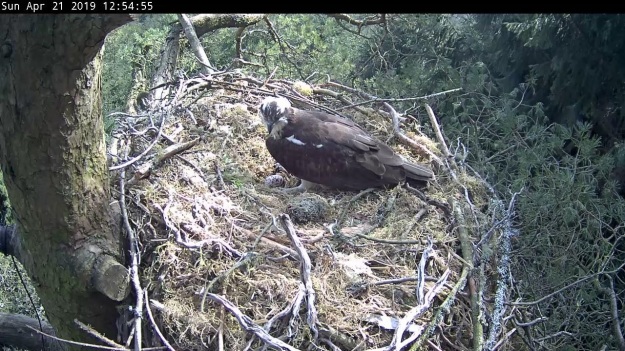 Since this blog post was written, on the afternoon of 24 April, Mrs O has laid one more egg, bringing the grand total to two so far. We are hoping for at least one more! We have still not seen any birds return to the back up nest yet but remain hopeful, as there is still time. 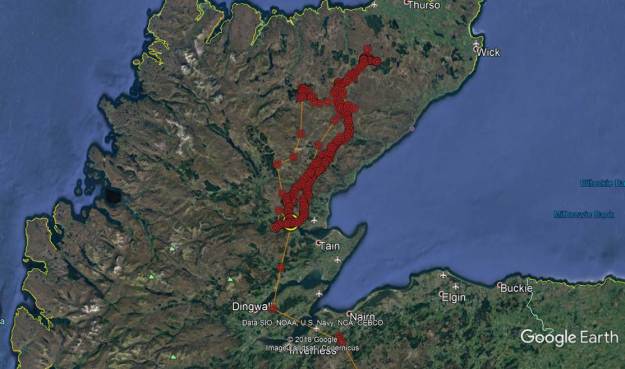 FK8, the 5-year old Tweed Valley female who is satellite tagged, arrived at her nest in Dornoch on 7 April at 14:18. It looks likely that her male partner has not arrived there yet, as she didn’t stay long before returning to her favourite fishing grounds up in the far north at Forsinard and Loch Slethill.

She has been fishing and roosting there, which is good as she will be getting into breeding condition and replenishing her reserves after her migration from Portugal. On 17 April she returned to Dornoch and was still there on 18 April , so perhaps her partner has since arrived and she is at the nest with him. We do not know anything about her partner as he is not tagged. The next set of data will indicate whether she is staying at the nest or not. 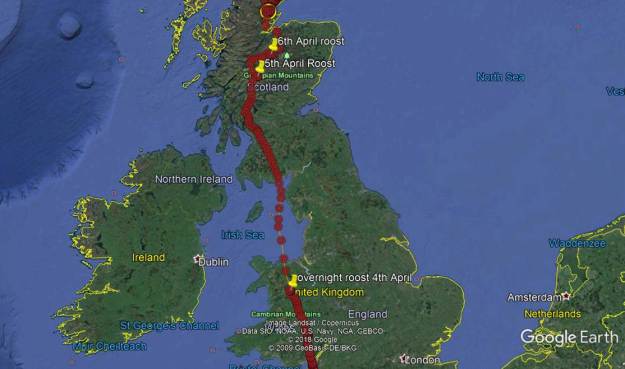 Her spring migration was swift and direct. She left Sines in Portugal on 30 March, headed northwards, and stopped overnight in Sarzedo in a clump of trees before continuing her journey into Spain. Her next stopping point was near to Ocero, on 31 March.

She took off the next morning and headed to the Spanish coastline, then out into the Bay of Biscay. She continued her journey, flying throughout the night to make the sea crossing, and reaching the shores of Brittany on 2 April after a 760km non- stop flight with no sleep. She spent a couple of nights on the mainland before crossing the English Channel, reaching UK shores at 10:30. She flew north through Wales and stopped over near to Penant after flying for 525km.

She left Wales from the coast, not far from Colwyn bay by St Cynbryd Church, and flew directly over the Irish Sea to Dumfriesshire, arriving in Southern Scotland at 13:16 on 5 April at Auchencairn. She flew over the Balcary Bay Hotel at a height of 92 m above sea level and a speed of 4 knots.

It took her one more stop to complete her journey near to the Rannoch Moor Hotel in the Highlands on 6 April. The next day she was safely back to her nest site from last year, near Dornoch. We hope that she meets her mate and has a successful breeding season.