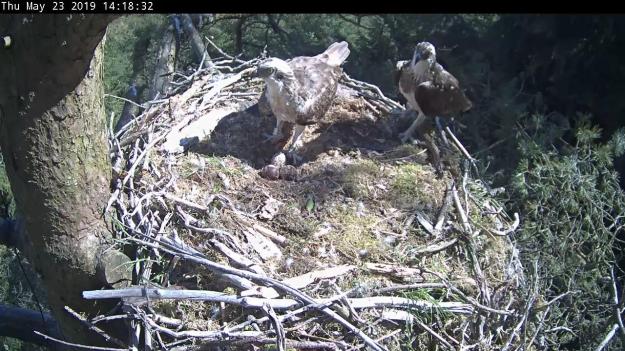 This will be an exciting week for our main nest birds, White leg SS and his partner Mrs O, because their chicks are due to hatch.

The first egg was laid on Easter Sunday, and then a second on 24 and a third on 26 April. Osprey incubation is for a period of between 37 to 40 days, so on 28 May it was officially 37 days since the laying of the first egg. There is no delay to start incubation, and chicks generally hatch out on consecutive days. We’ve been keeping a close eye on the brooding couple, but so far, none of the eggs have hatched. Here are this week’s highlights from the live feed:

This week’s highlights from the nest – click to play 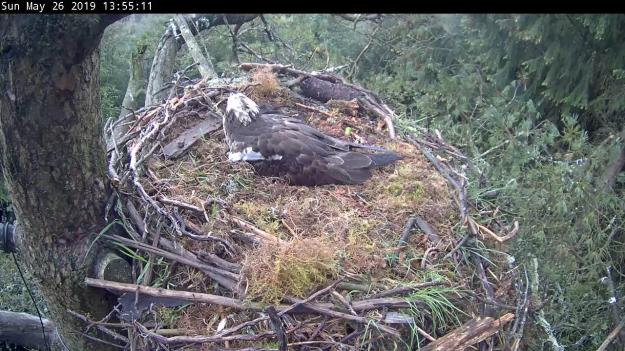 Looking at the nest on Tuesday morning, we could see Mrs O settling down into the nest in the rain, but there was no indication of any little arrivals. She was quite relaxed and just bearing the damp weather, keeping the eggs warm beneath her, but she must have been aware that they were due to hatch. 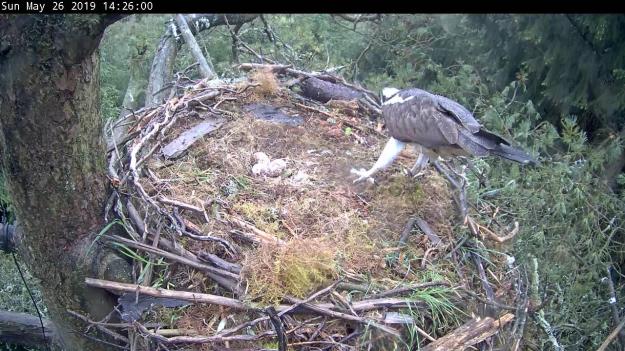 In the lead up to hatching time during the week, Mrs O was seen standing up from the eggs abruptly and moving away to the side of the nest to make way for SS, as he swept in on a rush of wings to deliver a half-eaten fish to his hungry partner. 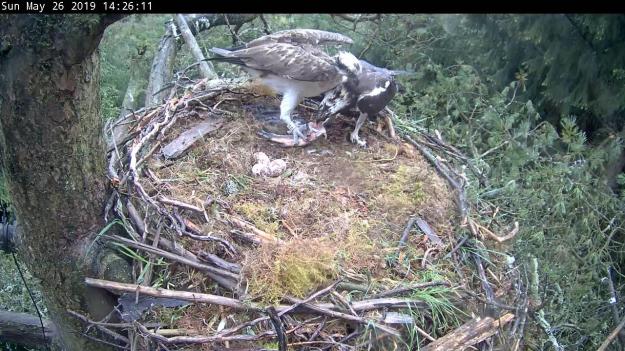 She took it from him and carried it up to the branch to the side of the nest, and began to feed, while SS took his turn to sit on the eggs. He rolled them gently and kept his talons curled in to avoid a puncture. The developing eggs would no doubt feel different now. They have almost fully developed chicks inside of them, and he was very careful and deliberate in his movements to ensure that they were kept safe. 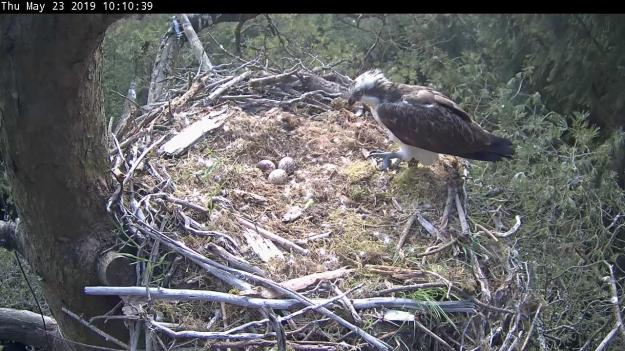 Prior to hatching, the chicks begin to ‘pip’ and tap with the little extension on their bill called the ‘egg tooth.’ This is a tool they use to break through the shell and into the outside world. Parent birds can hear this, and will wait expectantly for the young to hatch. The egg tooth is lost a few days after hatching. The chicks can no longer absorb oxygen through the egg at this stage, and need to break out to breathe air, and to begin to feed. It takes a great deal of exertion by the chick to break out of the eggshell, and they are weak and wobbly when they first hatch.

We are expecting to have the new arrivals at the nest, and with a bit of luck they should be ready to see on the camera screens by the weekend. Fingers crossed all goes well for the family! There is still the occasional bout of alarmed sky-watching from the parent birds, but hopefully it is not a real threat. Perhaps just another nosey osprey taking an interest in the site, and having a fly by on occasion.

Our live camera feed is back up!

The live camera feed hosted by Forestry and Land Scotland is currently back up and running. The feed suffers from slow broadband issues, but we have people in the field working on a solution. Although intermittent at times, the feed is back. You can still see videos from the feed, updated every week, on our Osprey Playlist.