While the majority of our timber harvesting is in fairly standard coniferous trees, occasionally something out of the ordinary comes along. Recently, a stand of extremely tall Douglas Fir came to light in an awkward location, leading to a specialist operation to harvest and sell the spectacular timber. Here's the story from our Niche Timber and Hardwood Development Advisor, Douglas (no relation!). 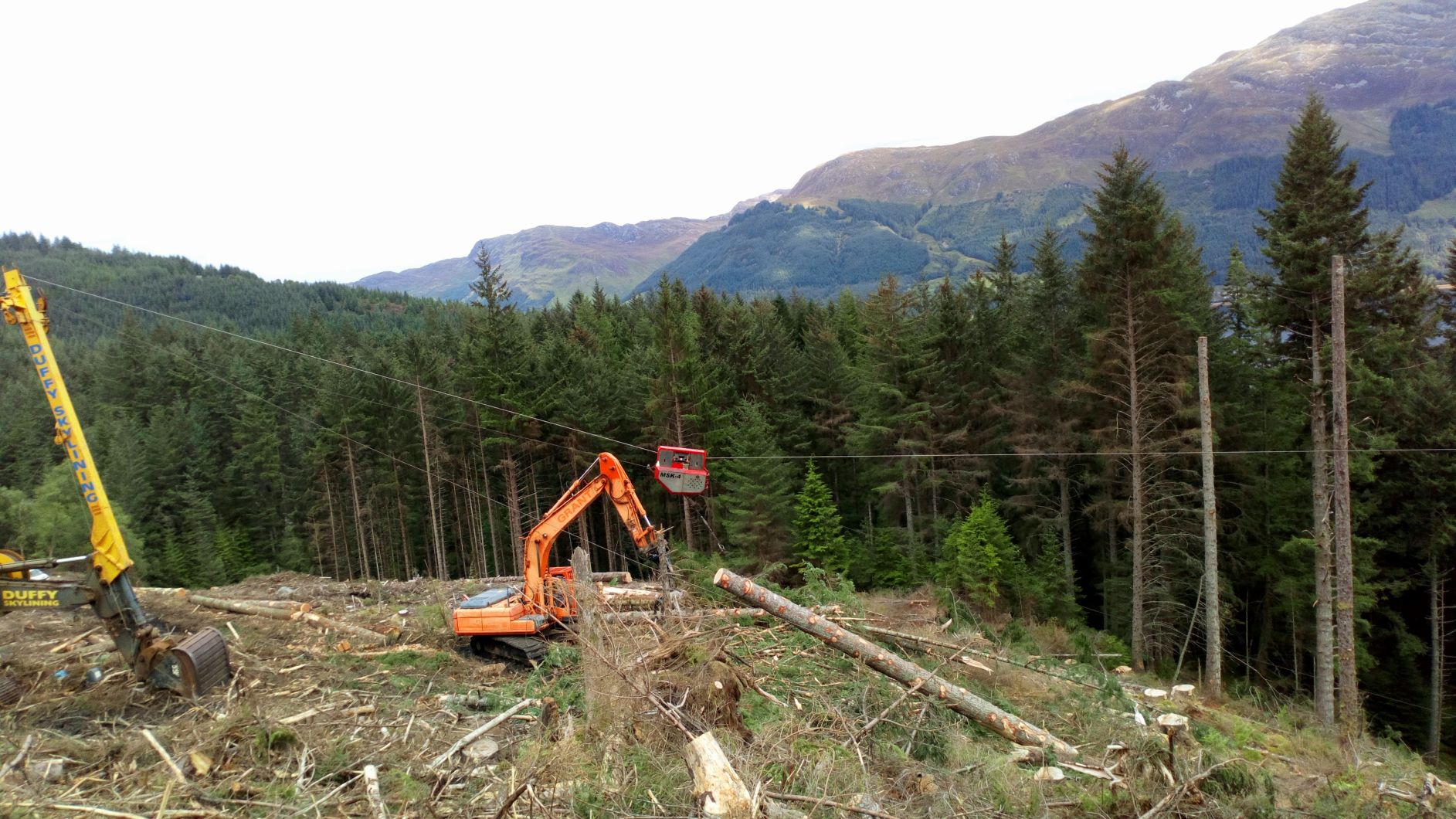 The sale of large diameter timber is always a special event. Complex harvesting operations and added focus are required to realise the value of trees that are beyond the scale of timber that Forestry and Land Scotland (FLS) typically produces.

I first became aware of plans to harvest at Wades Bridge near Glen Elg in 2019 via my colleagues in North Region who were in the preliminary stages of considering how to tackle the site.  Planted in 1924 in a narrow, steep-sided glen, the site could best be described as a challenging project, not least because the Glen’s own microclimate had helped the Douglas Fir and pockets of Sitka Spruce to grow and develop into some stunning specimens.

I jumped at the chance to view the site with local forester, Chris Nixon, but the journey to Wades Bridge from south of Perth was a challenge in itself. After driving through some stunning scenery to arrive at Shiel Bridge, it was then a narrow single track road to Rattagan which snakes its way over to Glen Elg and Arnisdale. Along the way, at the bottom of the glen, is an unusually high 'Parliamentary' bridge, built by Thomas Telford as part of a major upgrade to the previous military road in the early years of the 19th century. The military roads were built by General Wade (and later Major Caulfield) in the mid 18th century, and it's from this road that the glen takes its name. 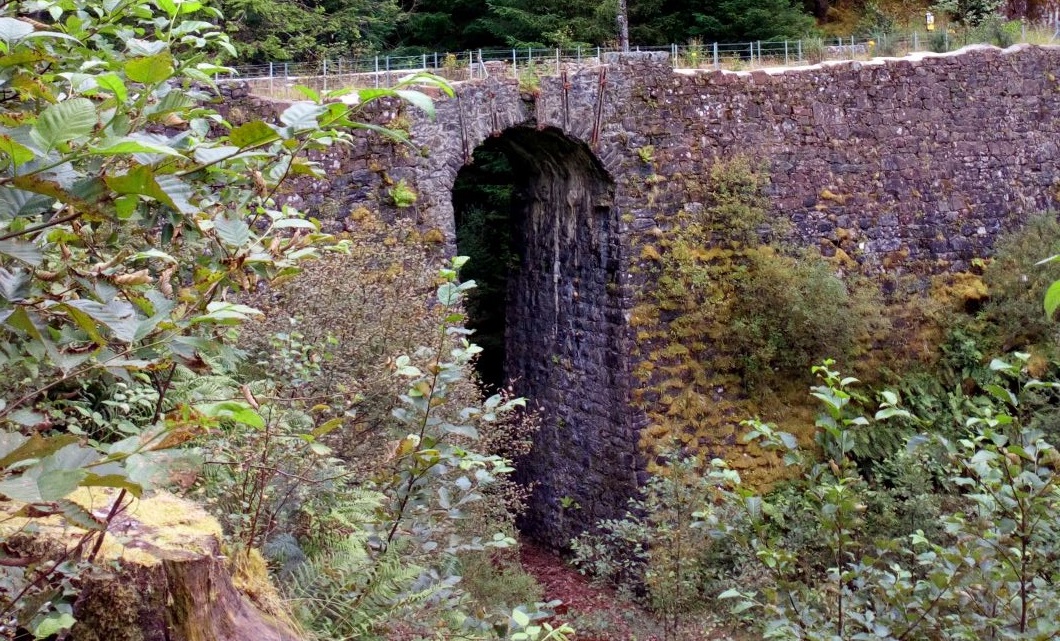 From my initial site visit to Wades Bridge, it was evident that there would be a lot of interest in the Douglas Fir from a wide range of customers. From what I have experienced in my role as Niche Marketing and Hardwood Development Advisor with FLS, the specialist timber market is always seeking large diameter Larch, Western Red Cedar, and of course Douglas Fir.

For the Douglas Fir at Wades Bridge there are some impressive statistics with some trees stretching to almost 40 meters in height and individual trees weighing in the region of 9 tonnes: these are not our normal trees! Having seen the trees and appreciating how special they were, I did wonder whether the Douglas Fir could be retained but our North Region Forest Planners felt that felling now was necessary to avoid the scenario of recovering enormous windblown trees from a steep site.

With all FLS harvesting sites, a high degree of planning is required to ensure that site constraints are identified, appropriate procedures are applied to ensure safety, and environmental factors are addressed. However, with Wades Bridge there was the additional matter of requiring a cable crane and supportive machinery that would be necessary both to counter the steep ground, and to deal with the enormous logs which would be generated from harvesting. 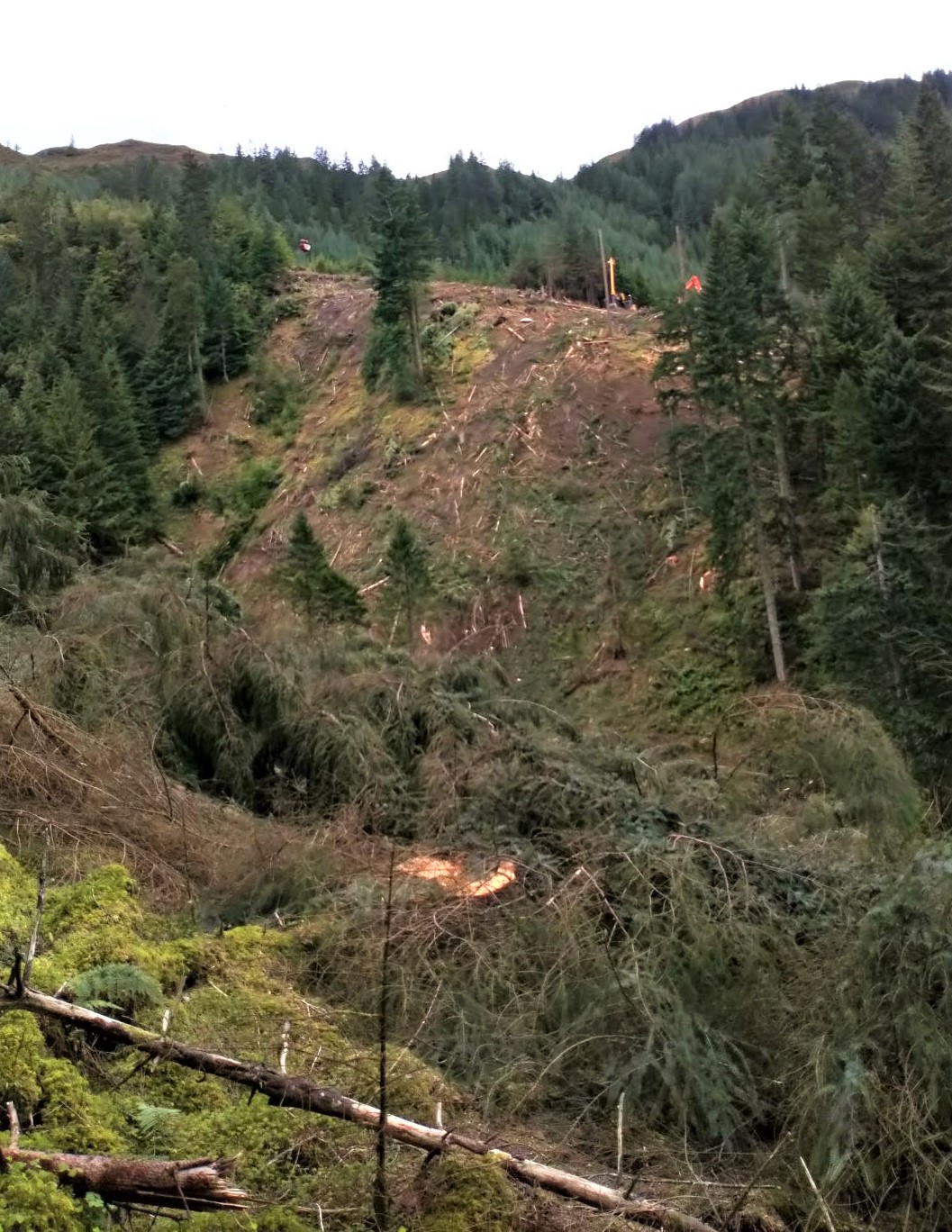 With some very testing terrain and enormous timber, ensuring a smooth running harvesting operation on sites like Wades Bridge depends entirely on having the skills, experience and necessary machinery. These requirements have been met over the past few years by Mull based cable-crane contractor Calum Duffy, whose team has been an integral part of FLS specialised programme of working on particularly steep sites.

Due to the Coronavirus outbreak, the project was put on hold for some time, and when operations resumed this summer, the shape of the timber market was a real unknown. With the rarity of these trees dictating their value, I started by making contact with some of FLS’s more regular customers to gauge the appetite for very large timber at the point in time. Much to my relief, the majority of responses I received were positive and there was definitely a demand for this exceptional wood.

Work started in earnest in August, and it was a sight to see. Watching the harvesting operation from a safe distance generated a sense of anticipation as the high-pitched noise of the chainsaw is replaced by the swoosh of air flowing through a fast moving tree canopy, to be followed by a deep thud of heavy timber hitting the ground. The drama continues with the cable-crane taking the strain of a chokered log from down in the glen and slowly hauling the enormous weight to a site accessible by the forwarders. Such is the weight of these individual logs that a specialist excavator is required to move the logs after felling.

The Douglas Fir at Wades Bridge are exceptional and in one way there is a sense of loss that these gentle giants have gone, but they will be replaced as the forest cycle is in perpetual motion. In time, planting at this site will allow a new generation of trees to grow over the next century. Equally the beams, cladding and other products created from the mighty logs have a unique lineage which will give people a sense of pride in saying, “yes, this timber came from Wades Bridge!”

Find out more about how we harvest and sell timber.

What We Do - The Timber Industry