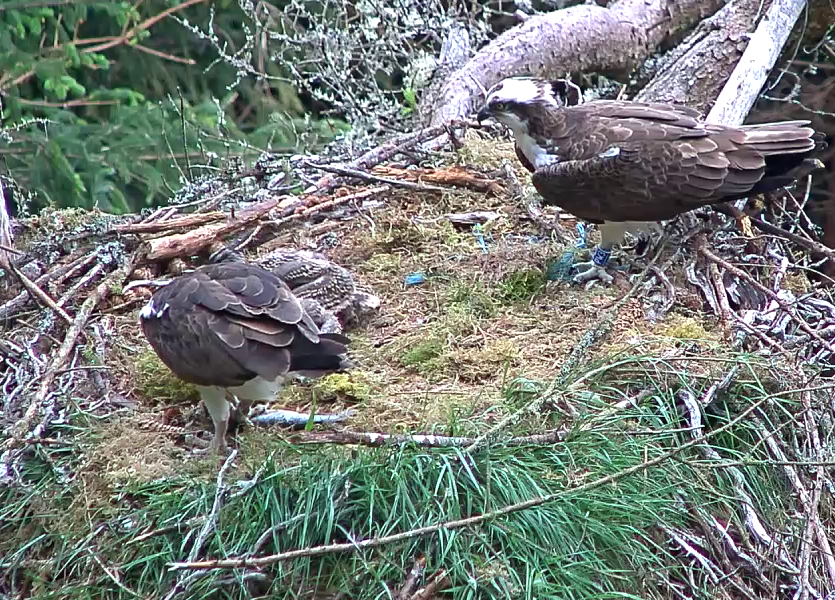 At the main Tweed Valley osprey nest, changes are occurring rapidly, as the two young ospreys develop. The chicks at two weeks old were very reptilian looking with extended bodies and not much in the growth of feathering. Their heads were not particularly attractive at that stage but what a difference after five more days of growth. The colouring of gold, brown, black and white were noticeable as feathers slowly began to split from the stubby shafts and their heads too were changing colour with white and brown streaks offsetting their black eye-stripe. They have moved back into the realm of being cute again and at three weeks old were actually looking like little ospreys in the making. 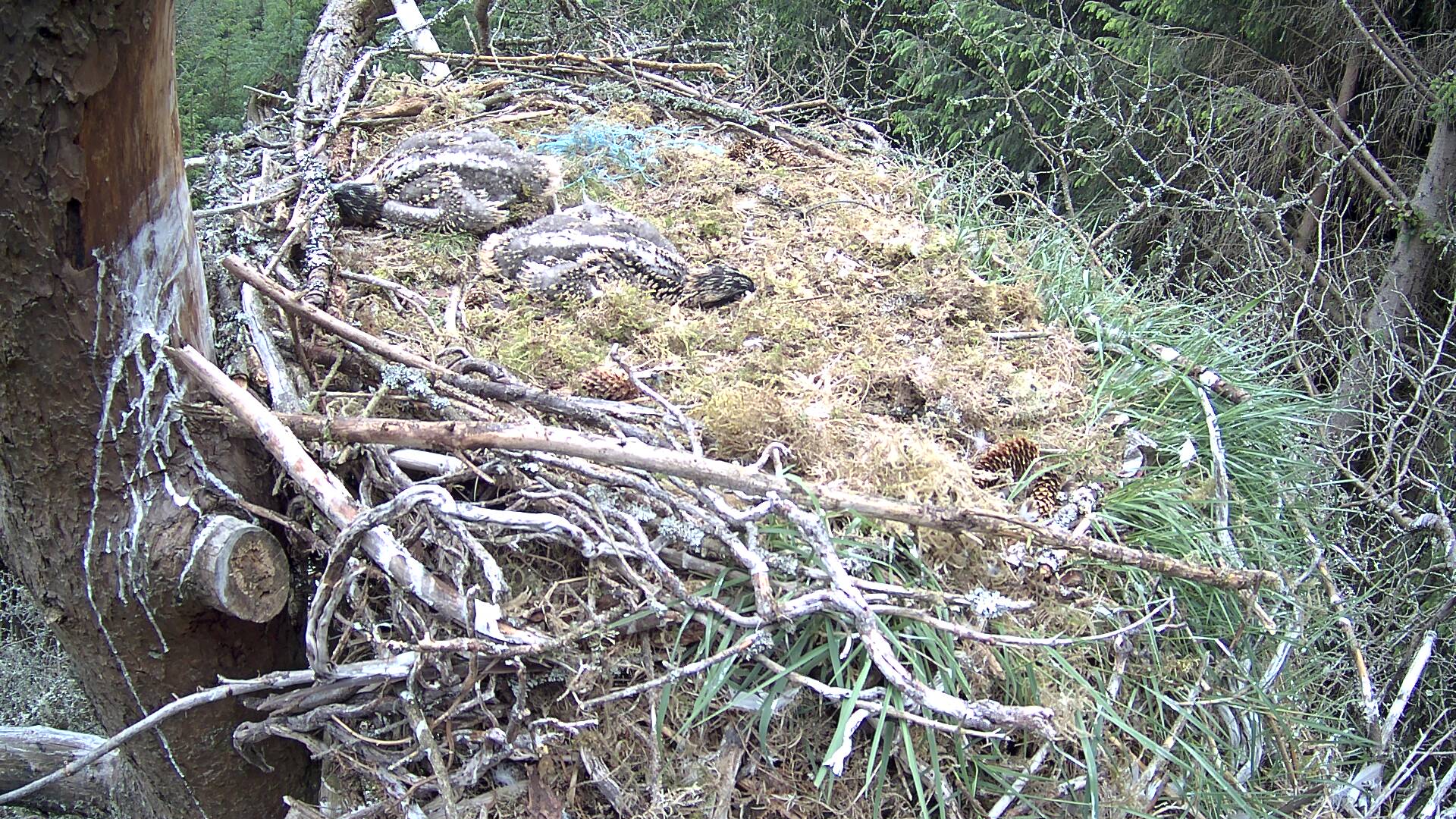 Dad, (PW3) is still bringing material into the nest and there are now eight pine cones and worryingly a piece of straggly blue baling twine. On 14 June when it first appeared, it was at the edge of the nesting platform but very accessible to the chicks, which could become entangled. Mrs O was seen looking down at it curiously but she never moved it. It is something we will have to keep an eye on in the coming weeks and hope that the young birds do not get caught up in it. Further material has since been added, with some fresh moss placed on top of the twine, so hopefully this will help to keep it from posing a danger. The young ospreys spend plenty of time preening as their feathers develop, and when done with that they sleep a lot in between feeding sessions. 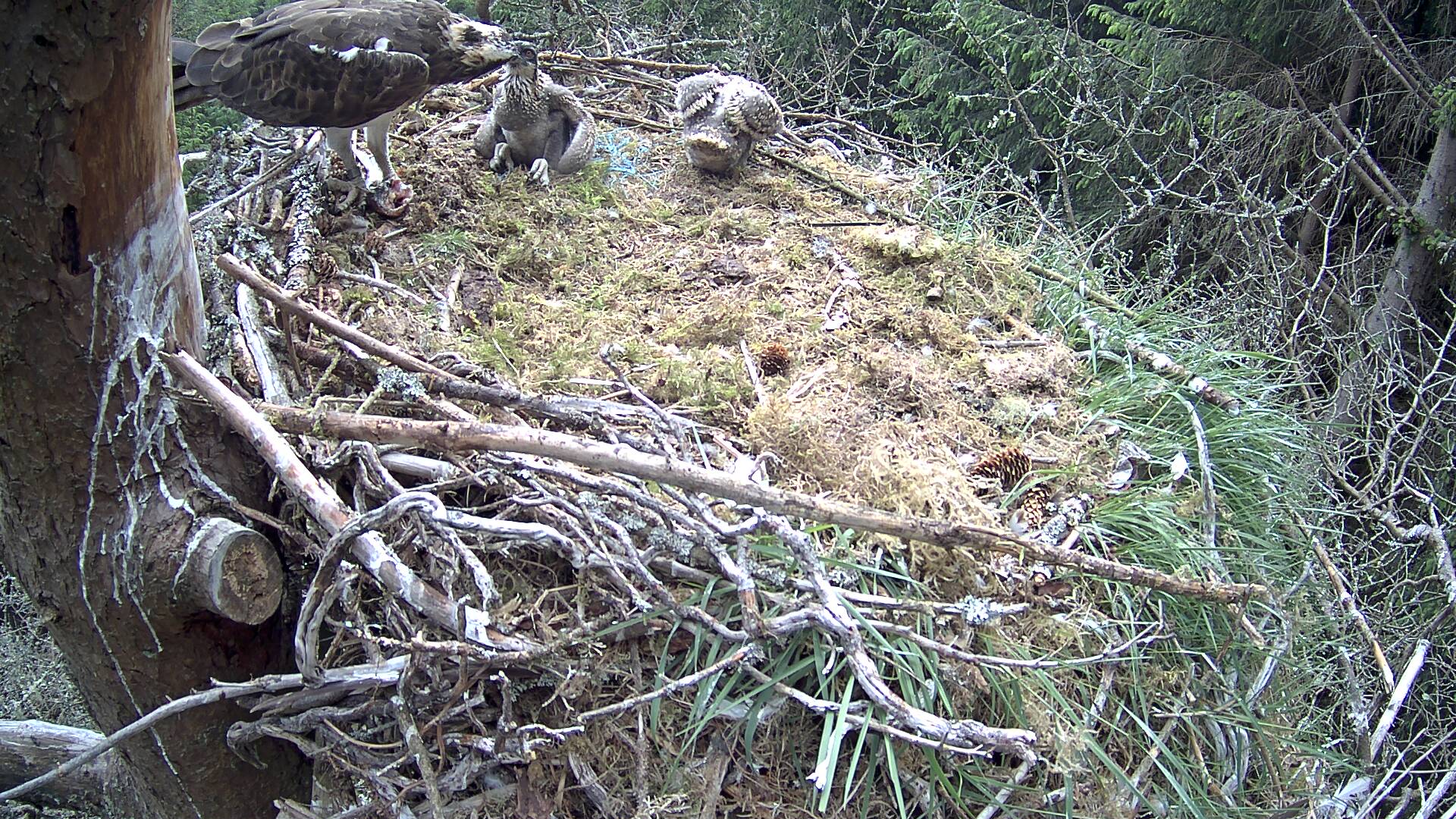 Mrs O circles the nest when she is expecting PW3 to drop in with a fish. She can be seen looking up and calling as she walks around the chicks. Possibly, PW3 circles the nest in flight above, before landing and she moves into position to allow him space to drop down. As he approaches, she backs away giving him room, the chicks then stir from resting and begin to get active as the excitement of imminent feeding looms. PW3 landed with a small trout in his talons on 14 June and Mrs O pounced upon it and removed it from his talons with her beak then transferring to her own talons. She then dragged it across the nest to her favoured feeding position as the two youngsters clambered over to join her. PW3 stood and watched the start of the feeding procedure before flying off a couple of minutes later. 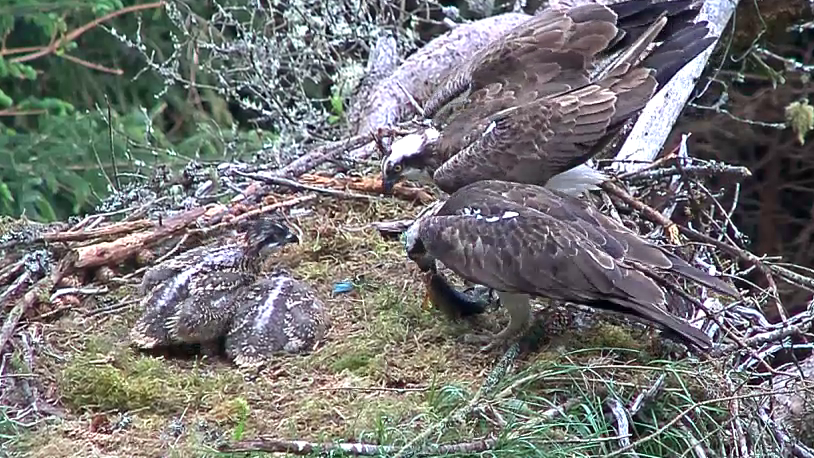 News from across the country

We had some great news from Loch Garten as a female osprey, with darvic ring 308, raised in a nest in 2019 in Tweed Valley, appeared on the perch next to the Loch Garten nesting platform. This bird was the youngest from a brood of three, (two females and a male) judged by size, weight and wing length. She came from a nest which is an artificial nesting platform, erected by Tony Lightley in 2006 and has been occupied ever since. In total, this nest site has seen 24 young ospreys fledge successfully. Female 308, arrived at the Loch Garten site on 9 June. She perched to the side of the nest, staying for just over an hour, happily preening. It would be really good if she makes this her territory for next year. She is too young yet but next year she will be ready for a first brood and she will spend time this year looking at prospective nesting locations.

Further exciting news is that we have the first nesting pair of red kites known to be in the Peebles area this year. Red kites have been successfully nesting in the Borders, in Selkirkshire for the fourth year running but now we have our very own pair. Evidence of their presence was further confirmed locally when one of the pair was spotted checking out one of the Peeblesshire osprey nesting sites and was not met with a welcome reception by the resident pair, who soon sent it packing.

These beautiful birds of prey, once extinct in Scotland since the 1800s due to persecution, have a distinctive flight and can be recognised by their forked red tail and they are largely carrion feeders. They are classed as green conservation status, considered to be 'near threatened', which is a species under recovery. Reintroductions first took place in Scotland between 1989 and 2009 with birds from Germany and Sweden. Slowly the population range has expanded and it is delightful to have them back in Peeblesshire.