Cleaning up the Clootie Well at Munlochy

A subterranean secret
A moment in time: visiting a Scottish broch
What are we doing to protect and conserve nature?
Rock-Art-Ology
Big Douglas

Cleaning up the Clootie Well at Munlochy 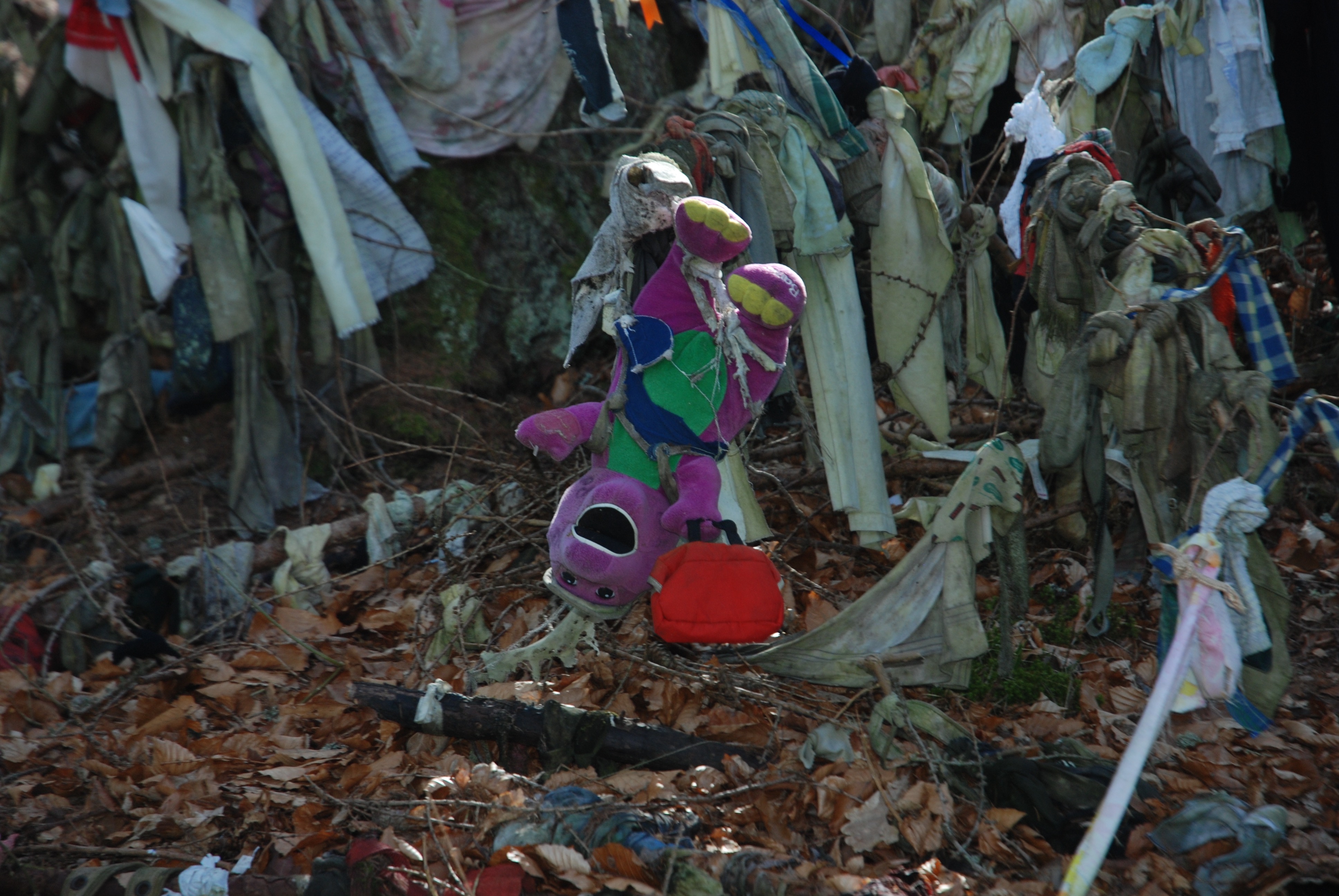 The Clootie Well at Munlochy is a fascinating place to visit. A site of historical significance going back possibly as far as the 7th century, it has long attracted visitors and pilgrims due to its association with ancient, pre-Christian healing traditions, and is seen by many as a site of great importance to the Pagan religion.

According to tradition, handed down from generation to generation, if a rag or 'cloot' is dipped in the well and tied to a tree near the sacred well, it is believed that a sickness or ailment will fade as the rag disintegrates over time.

While this centuries-old tradition has always been seen as a ritual in harmony with nature, over the past few decades the site's atmospheric setting has been spoiled somewhat by devotees choosing to leave non-biodegradable offerings, with everything from plastic, to nylon, to toys like Barney (pictured) tied to the trees. As well as looking a bit unsightly, these materials can cause disruption to native plants, animals and birds.

Time for a clean-up 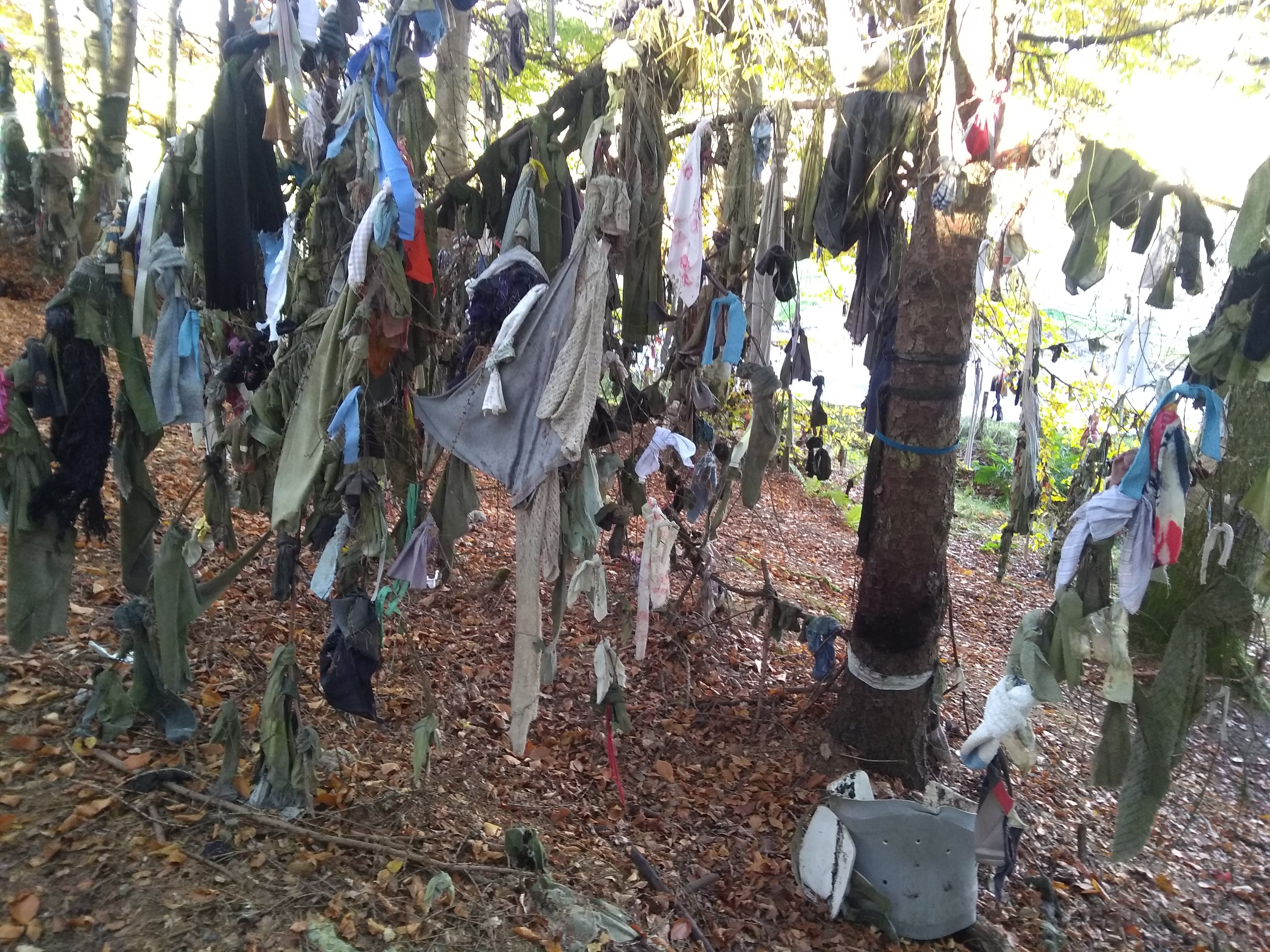 The 'after' shot - while the clootie well may still look a bit messy, all non-biodegradable material has now been removed.

Last week, Forestry and Land Scotland rangers joined up with local community groups to clean up the Munlochy Clootie Well. Because the historic Black Isle site had begun to look a little worse for wear, the local team decided to clean and revitalise it, while respectfully leaving in place any offerings which were biodegradable, and environmentally friendly.

The community clean-up came about after local resident Annette George visited the site, and was shocked at its condition. “I’ve lived in the area for about fifteen years and I’d noticed a steady decline in the site, but a recent visit left me in tears," she says.

"The branches of the surrounding trees were weighed down with clothes, shoes, electrical equipment and even a venetian blind! It resembled a fly tipping site rather than an ancient holy well." Annette was keenly aware of the need to balance the clean-up with a respectful approach towards items left as offerings in memory of family members, or because of deeply-felt religious convictions. 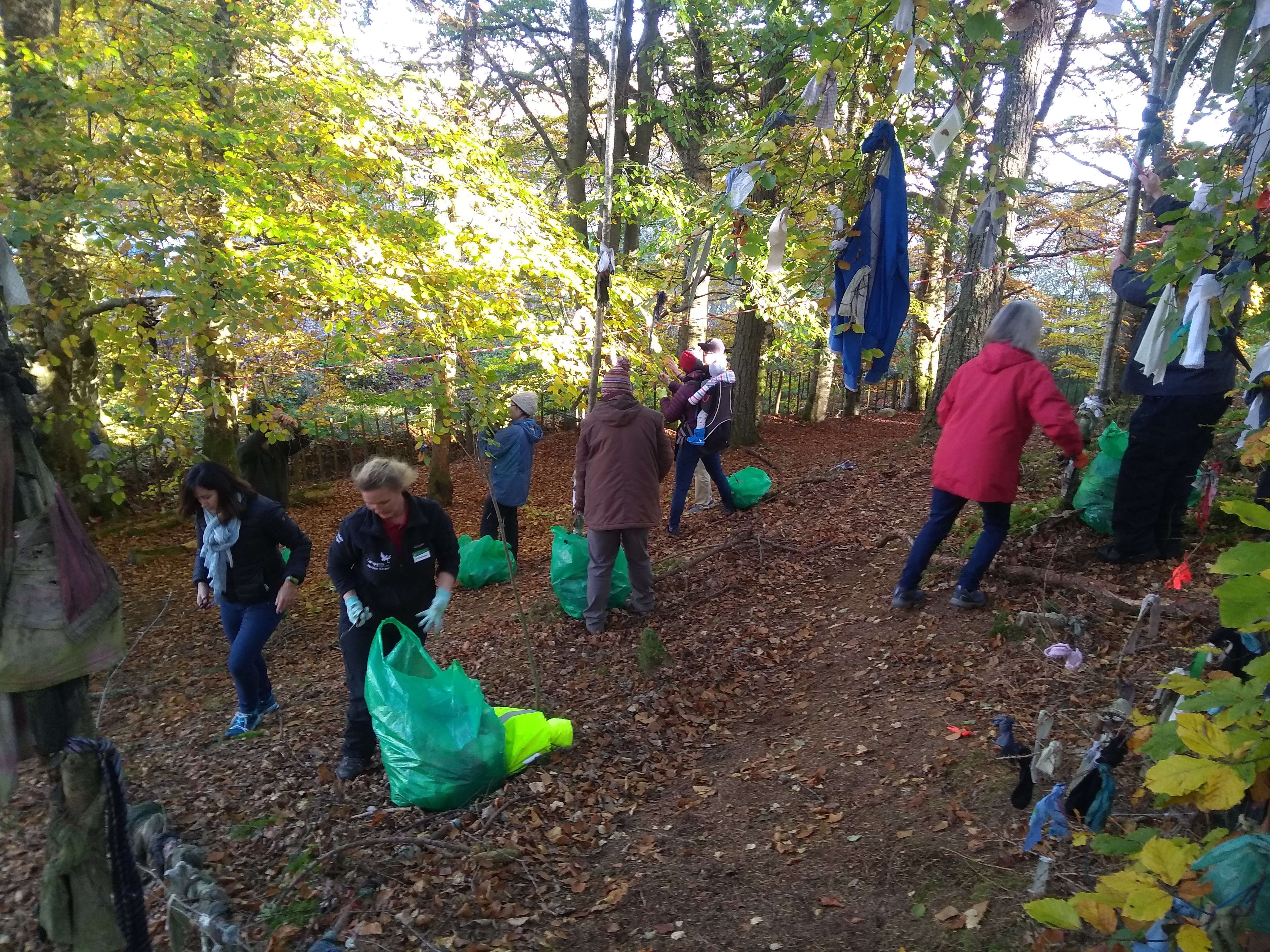 Volunteers hard at work cleaning up the clootie well.

The clean-up day itself was a big success, with tea, coffee and snacks on hand, and FLS rangers helping to entertain the local kids with crafts, activities, and story-telling sessions. Our staff were joined on the day by enthusiastic volunteers from the Knockbain and Munlochy Community Council and the Friends of Munlochy Clootie Well.

Maree Morrison of FLS, who was in charge of the operation, was very pleased to have cleaned up this mysterious and precious site at last. "Munlochy’s Clootie Well has been a place of pilgrimage for hundreds of years ," she says. "The Well is still a very popular site today but many of the offerings left by visitors are not biodegradable."

"We wanted to protect this area and not clear too much," Maree explains. The cleanup crew removed items such as underwired bras, polyester flags and pairs of trainers, collecting 50 bags of unsuitable offerings. "We would like to thank all of the community volunteers for coming along to help out. We would also like to thank The Woven Land Network for their advice and assistance on the day, which helped us keep the traditions of the healing well at Munlochy alive."

FLS politely request that any offerings left at the site in future are restricted to natural cotton or wool. Any plastics, polyesters or other materials won’t disintegrate, and will be removed. Plus, as Maree reminds us, unless the rags can wither away, the healing magic won't work. "They won’t be much help!” she says.

A subterranean secret
A moment in time: visiting a Scottish broch
What are we doing to protect and conserve nature?
Rock-Art-Ology
Big Douglas