Dad looks after the chicks 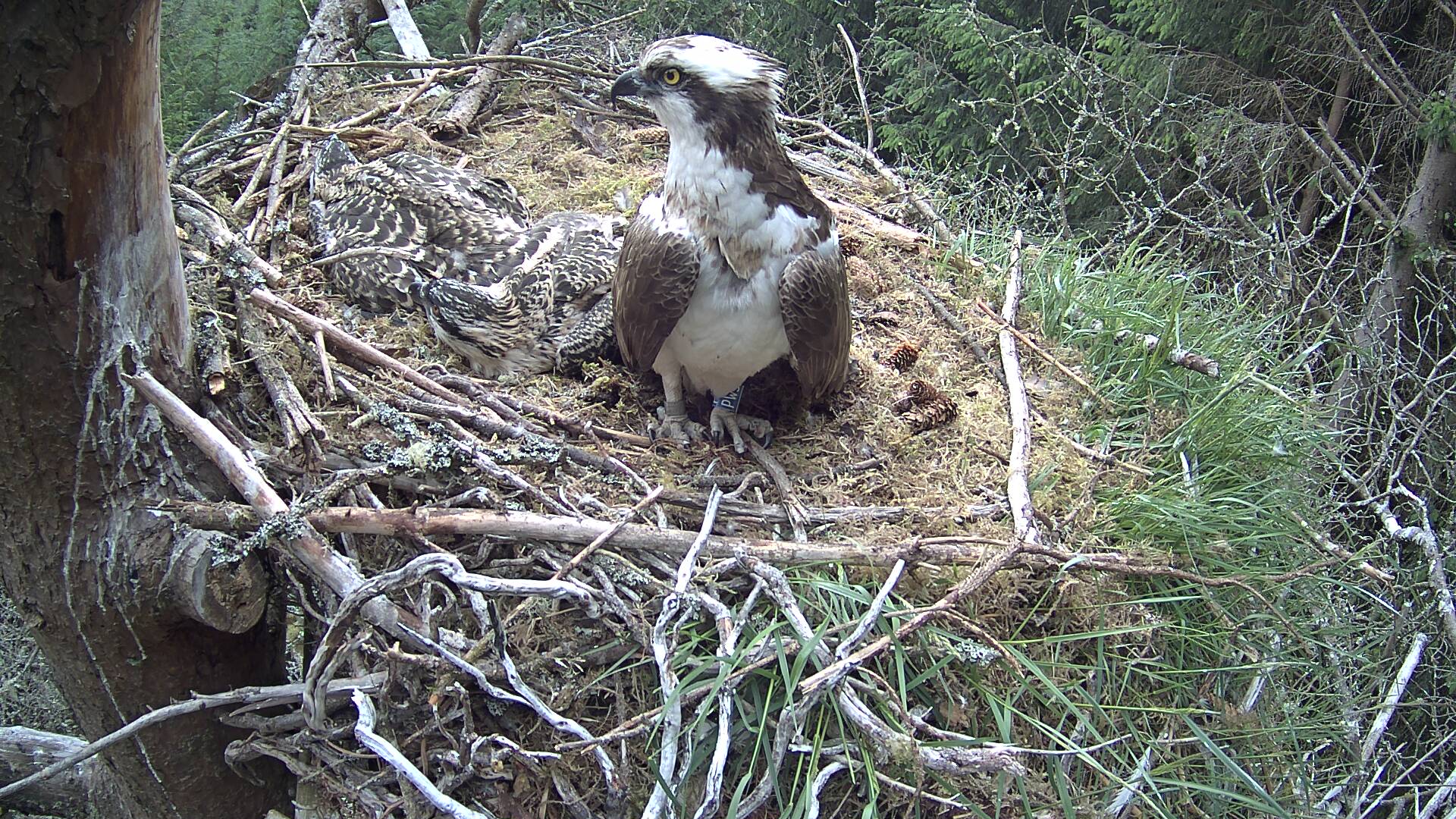 On 27 June, the osprey chicks in the main Tweed Valley nest were 32 days old and we can see just how dramatically they have changed since they first hatched, when they were no bigger than a hen chick. When they first emerged from their eggs, they were weak and wobbly and covered in uniform grey down, with only an eye-stripe hinting at the ospreys they will become. And although the change is dramatic over a month in time, on a daily basis it is so subtle. Now the young birds are completely feathered and their heads are brown and white striped, their eyes are now as yellow as their parents’ eyes. The tip of each feather is pale gold which is indicative of juvenile plumage compared to the uniform brown of the adult birds along the back, wings and tail. The young birds have not developed their full flight feathers yet on the wings or full tail and these still have a way to go before flight could be attempted.

Their father, PW3, is still bringing fish regularly to the nest and Mrs O feeds them. They are being very well catered for in that department. On Sunday 27, the young were still full after their meal when a second fish was delivered by PW3. This was good to see as some of the smaller fish brought in at the start of the week left Mrs O hungry and calling. She has not gone hunting for herself as far as we can tell because she is staying close by the young in the nest and feeding on what is left over, after dinner.

A slight shift in behaviour occurred with PW3 staying at the nest twice while Mrs O was briefly absent at the weekend. Prior to seeing this, we have not witnessed any interaction between him and his offspring at all and he just stood there to the side of them while they lay down. His role has most definitely been to provide food only and no doubt guard the territory too when in the vicinity of the nest. 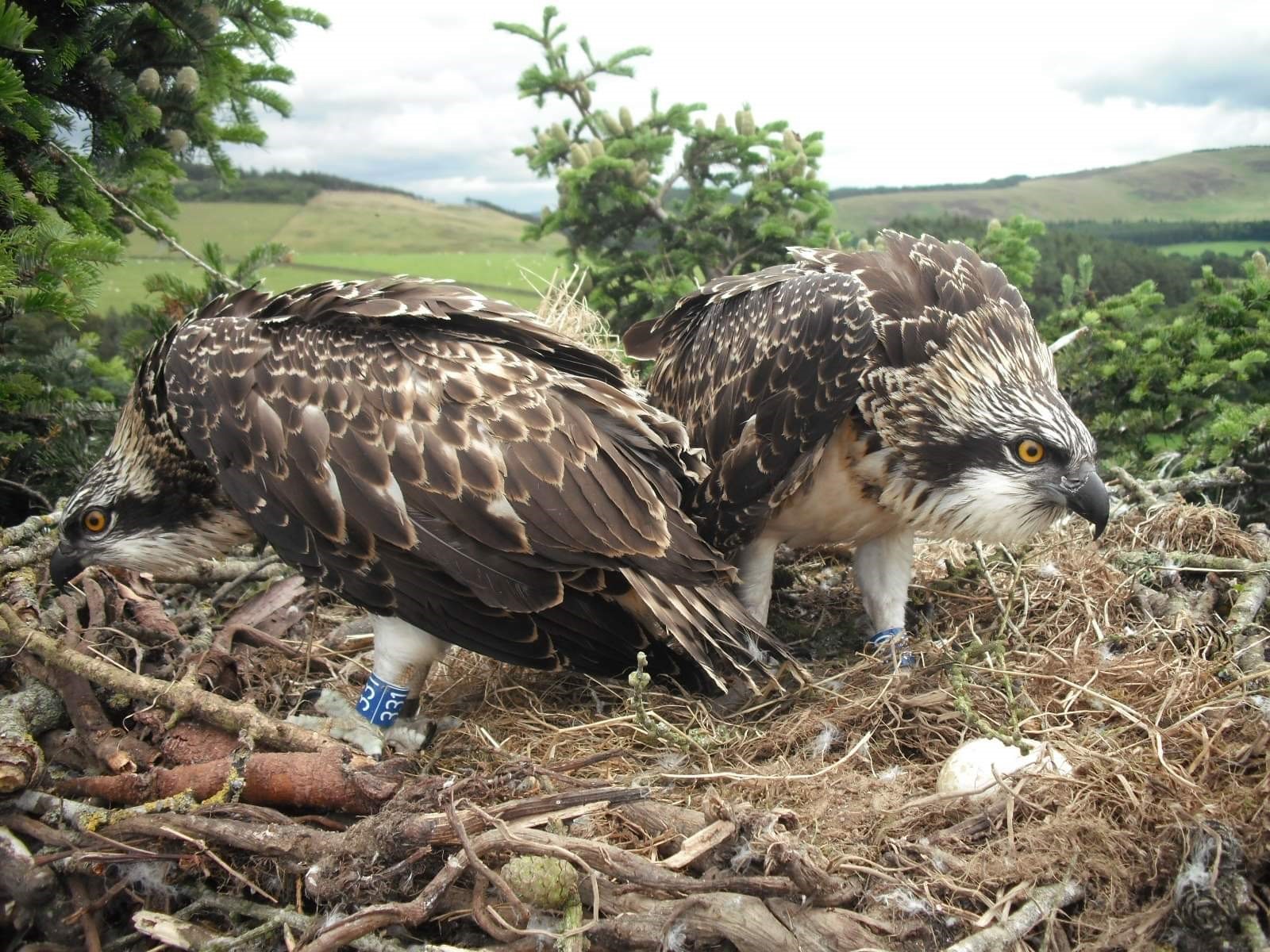 We got some great news from Kielder osprey project this week to say that two Tweed Valley ospreys had cheekily visited their nest ‘no.7’. On 12 June, osprey 331 flew past the nest and then on 18 June, osprey 330 appeared at the same nest, startling the resident occupants. What is so amazing about this news is that these two birds are brother and sister from the new nest site, in a Douglas fir tree, from 2019, west of Peebles. From tracking records, we know that birds do not remain together as a family or even migrate to the same areas, so it is a big coincidence for them both to return and be seen at the same site in Kielder a matter of days from each other. Both are two year old birds now and scouting for territory for next year no doubt. It will be interesting to see if they stay at Kielder or venture to Scotland next year to attempt to find partners and breed. We also know that 331 has travelled back to the UK from Senegal because he was photographed at the Langue de Barbarie in Senegal on 19 February 2020 by Christelle Toustou (see below). We don’t know if his sister also went to Senegal or whether she went elsewhere and they by chance arrived in Kielder during the same week this year. 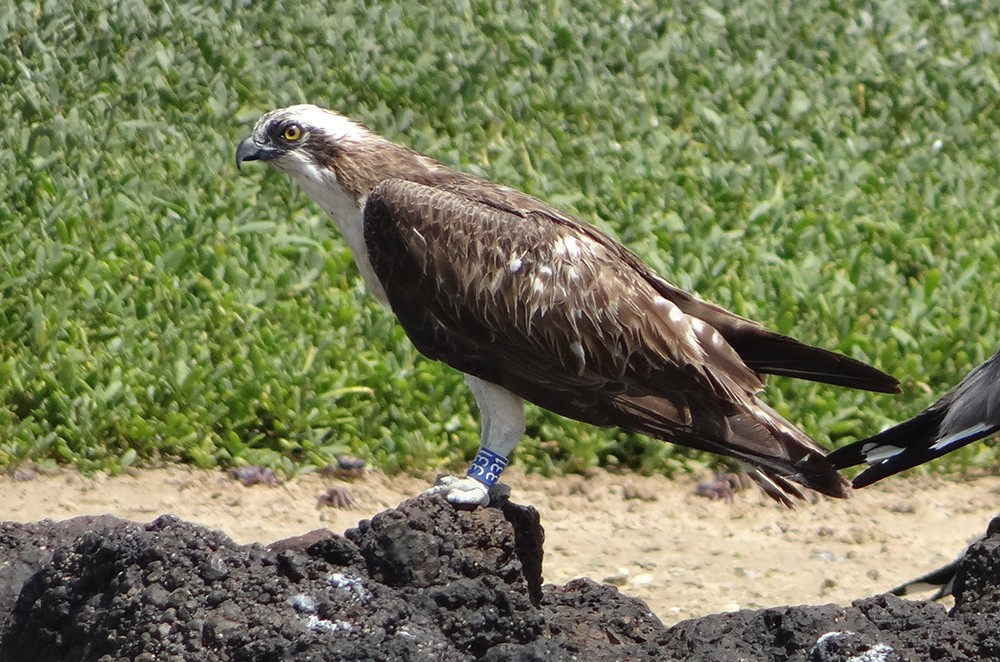 PW3 is only about 2 miles away from his parents’ nest site and he must see them when he is out hunting in Peeblesshire, it would be impossible for them to not cross paths when they are so close and hunting the same areas. Does he cheekily fly past and have a look or does he keep away from their territory where they will be busy with this year’s brood?

Ospreys certainly do check out other nest sites and many times birds have intruded onto occupied nests as unwelcome visitors to the resident pair which have been present. But once they are settled in their own territory with a brood, this behaviour may be less prevalent. Mostly, it is young birds prospecting for a site for the following year or displaced birds that tend to pop up at sites and cause a stir.