A 20th birthday and 3 chicks 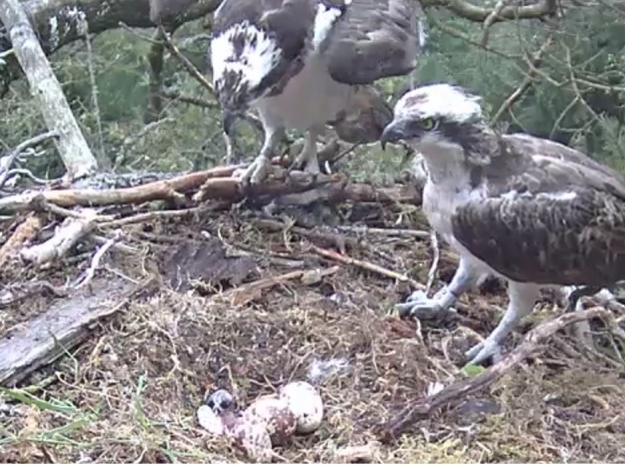 The first of SS and Mrs O’s brood for 2019 hatched on 29 May at 4pm. The hatching was witnessed by Lorna Corley-Jackson, the volunteer on duty, who was delighted and very moved by the event. As we reported last week, she said “I’m thrilled, it was one of the most special events of my life. It will live with me forever.”

That’s the thing about watching the ospreys — they really touch your heart, and it is impossible not to develop a real sense of attachment to them when studying their lives so closely on a daily basis, via the camera link to their nest.

The privilege of watching the miracle of a new life beginning is something that the osprey project has brought to the public viewer each year since we began, as we follow these magnificent birds during their summer months here with us.

To be able to share that moment when the chick fist hatches and new life is brought forth as the parent birds look on is a real treasure. Particularly when it’s the hatching of chicks whose father is white leg SS, now 20 years old, and nesting here in the Tweed Valley since 2004.

The latest highlights – including feeding time with 3 baby chicks! Click to play.

Join us for some osprey cake! 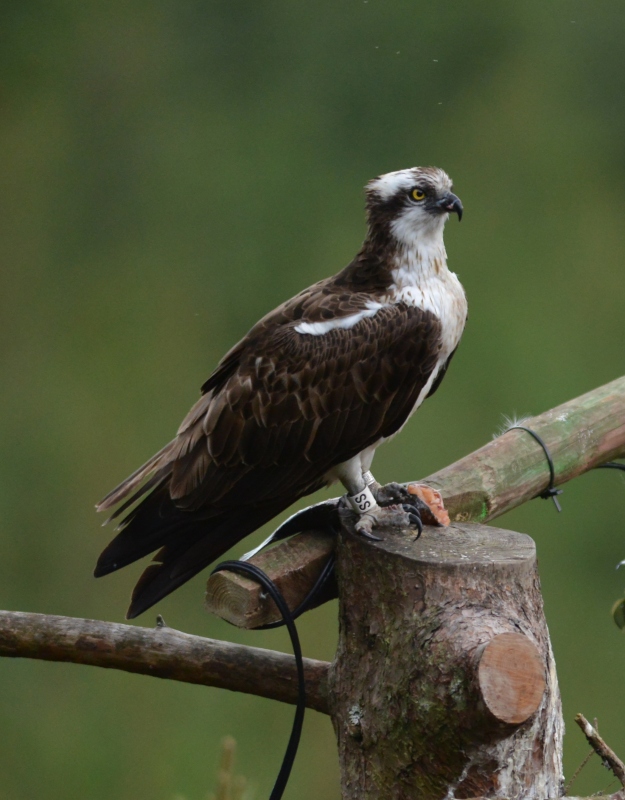 SS is 20 years old. Photo of SS taken a few years ago by Angus Blackburn

We are having a 20th birthday celebration for this special bird, with past and present volunteers for the Tweed Valley Osprey Project, at Kailzie Gardens on Saturday 8 June at 2pm. This is a reminder to any volunteers who would like to come along, and share some fantastic osprey cake (not made with real ospreys!) that will be there on the day. The cake will be created by Emma’s Cakes of Kelso, courtesy of funding from Awards for All, for the ‘bringing communities together’ theme, awarded to the Friends of Kailzie Wildlife.

We will be sharing our osprey-related talents too, in poems, songs and artwork. In the background, there will of course be the family of ospreys, on screen with their now completed brood — 3 perfectly healthy, newly hatched chicks (hatched on 29, 30 and 31 May consecutively). 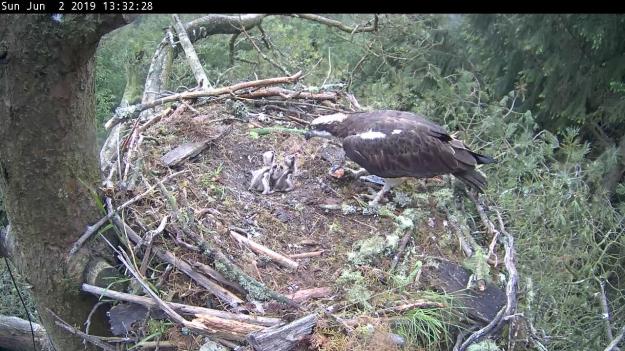 The latest news from the nest

It has been a challenging week for the new-borns, with some rough weather. Mrs O has been a super-mum, and sometimes passed over the chance of fish from SS because she had decided that it was too risky to expose them to the cold and rain during her feeding time. New chicks are very vulnerable at this newly-hatched stage.

During our glimpses of feeding time, when the weather briefly returned to more favourable conditions, we have been rewarded with the delightful sight of this little family bonding together. The very hungry chicks strain and reach their heads up as high as they can towards mum, begging for food. She tenderly puts little fish morsels into their beaks, after fiercely ripping them from the fish. It is such a contrast, from fierce to tender in one swift motion. 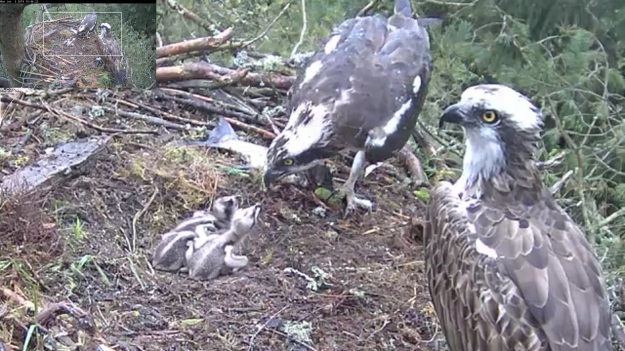 Dad SS looks on as Mrs O feed the little ones

Mrs O on the hunt

We have seen SS taking a turn at feeding the little ones too, when Mrs O has taken a brief fly from the nest to have a stretch and answer the call of nature. On one such return, she brought a fish herself — a first this season, as far as we know. She has not had to do any hunting throughout the incubation period of her eggs, thanks to her partner. Even though SS is a great provider and she had no need to hunt, the opportunity must have presented itself and she couldn’t resist snatching the fish from the water and bringing it in, still flapping, to the nest.

She fed herself for a few minutes and until the fish was dead, and then began to feed her youngsters, while SS stood to the side of the nest calling. Eventually, he went up on to the left hand perch and once the young were full, Mrs O settled them in, all cosy, beneath her.

It’s hard work for the adult ospreys to raise their young, and on 3 June this became even more apparent when two sleepy ospreys, Mrs O and SS, were both seen to be nodding off and taking a brief moment of rest, with eyes closed — just like any new parents, seeking rest whenever they can from a busy schedule of keeping their young safe, dry, warm and well fed.