Feeding time at the nest

Feeding time at the nest

On 20 June the young osprey chicks in the main nest were seen panting in the heat and indulging in a few sibling squabbles. Nothing serious but those sharp beaks are weapons not to be ignored. It seems that to disengage in battle, osprey style, is to put your head right down almost into the nest and turn your back on your opponent. This seems to make the aggressor back down. Battles persist a little longer when they square up to each other and engage in some serious pecking but thankfully no harm has come from any squabbles so far and they have not been prolonged. There doesn’t seem to be any particular cause for these scuffles as the chicks are definitely not going hungry but perhaps the temperature plays a part, and maybe the persistence of the forest flies (which are at their annoying peak right now) in the forests at the moment. They can be seen constantly buzzing around the nest and although fairly harmless they are always there and will be for the next few weeks until their population subsides. 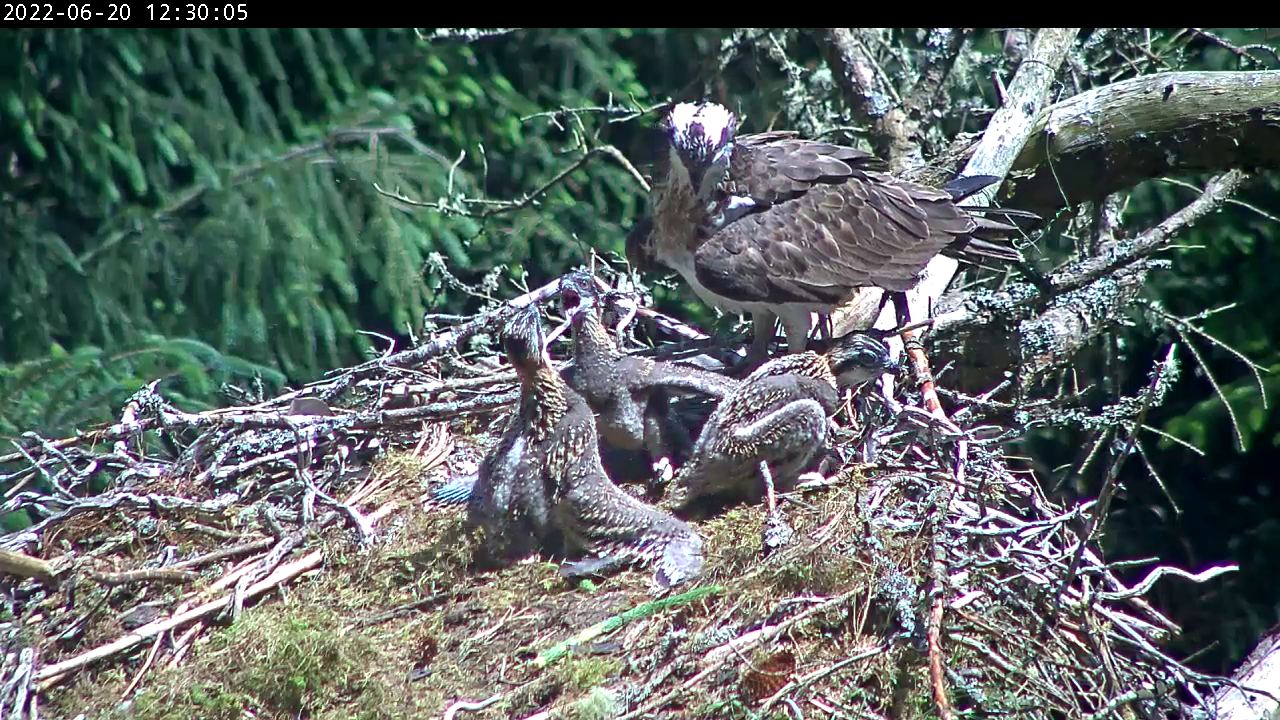 The chicks face each other in a pecking squabble 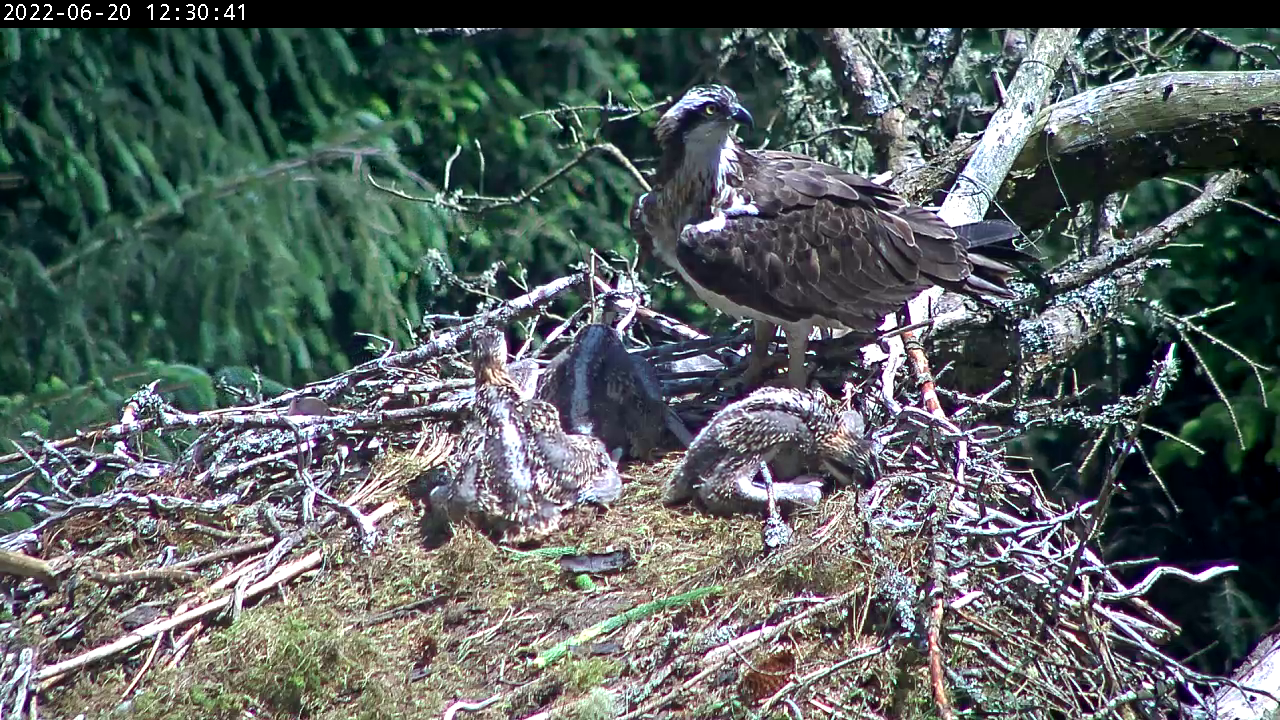 To avoid a fight - turn away and put your head down!

PW3 returned with a small trout for the family and Mrs O took it to begin to feed the brood. However, PW3 changed his mind and gently took it back from Mrs O. She did not seem bothered and he flew off with it. Ten minutes later he returned and began to feed himself and then to feed the smallest chick. He was apart from the others and to the side while Mrs O was with the other two. PW3 seems to take special interest in the small chick and has been seen a few times separately feeding it. The whole family at the nest together is a pleasing sight to witness. Once the littlest one was full, it waddled over to join mum and the other two and dad finished the remainder of the fish including swallowing the tail down whole. None of the fish is wasted. Every part is eaten, including the bones and the scales which is remarkable. With a long intestinal tract and specific enzymes, ospreys are able to digest every part of the meal. 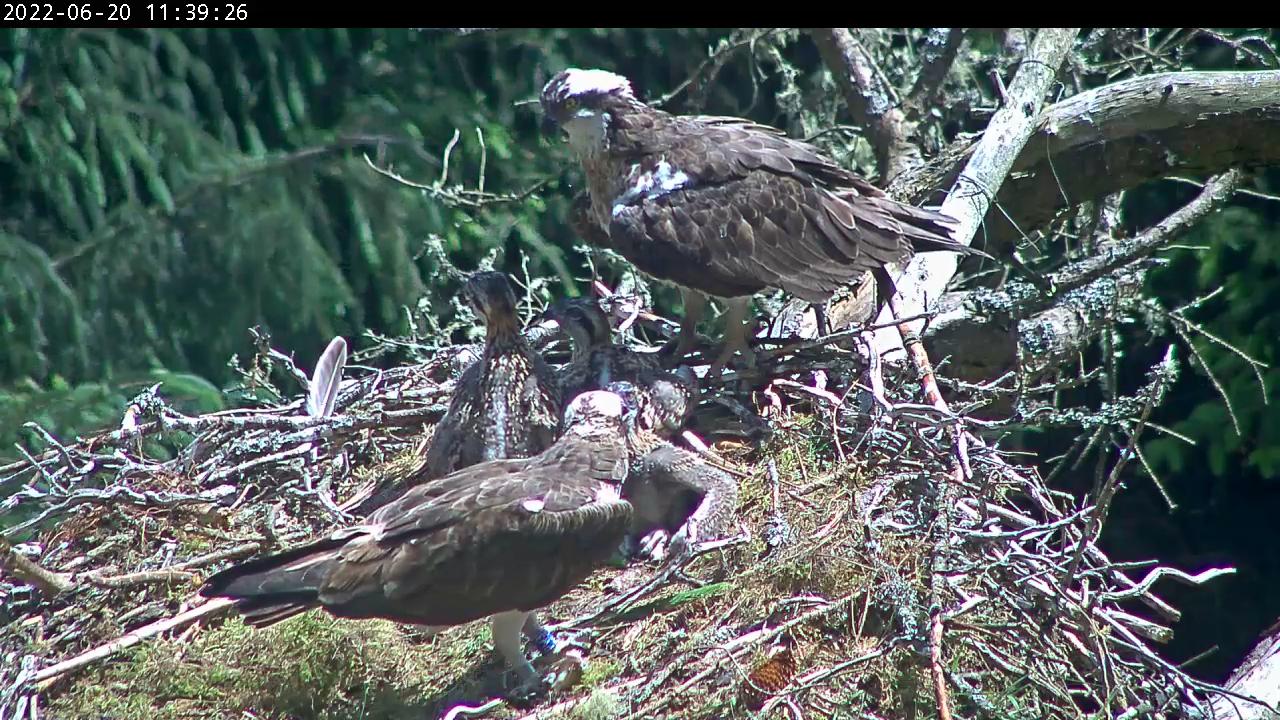 Two hours after the family had finished a meal, PW3 arrived back at the nest with a really good sized whole live trout. Mrs O took it from him and began to pull off portions to feed, starting at the jaw of the fish. It was a rather gory affair and soon the chicks became interested and started moving over towards her ready for feeding line up. There is a stark contrast between the apparent violence of tearing off strips of fish flesh and the absolute gentleness in which she passes this food to the beaks of her young brood. She has become a great mum and when the weather took a bad turn with a heavy downpour, she still shielded them beneath her as best she could. However, they are so big now that their rear ends stick out in the rain! 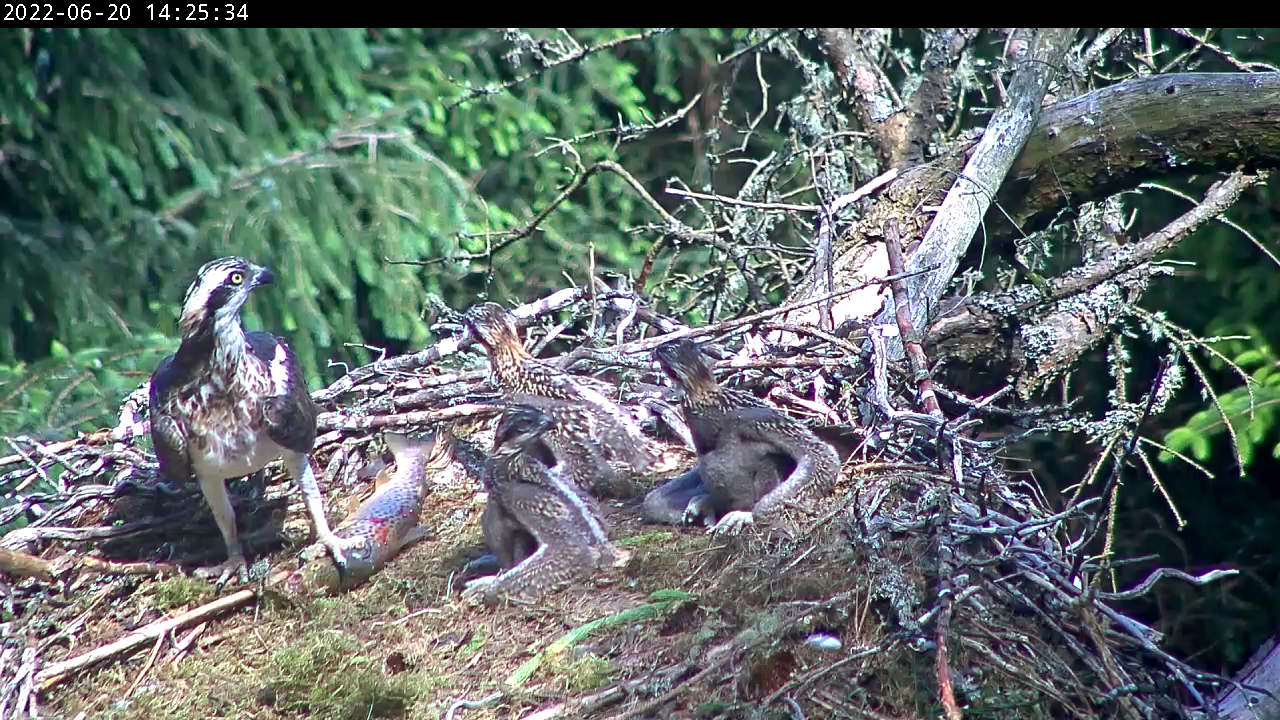 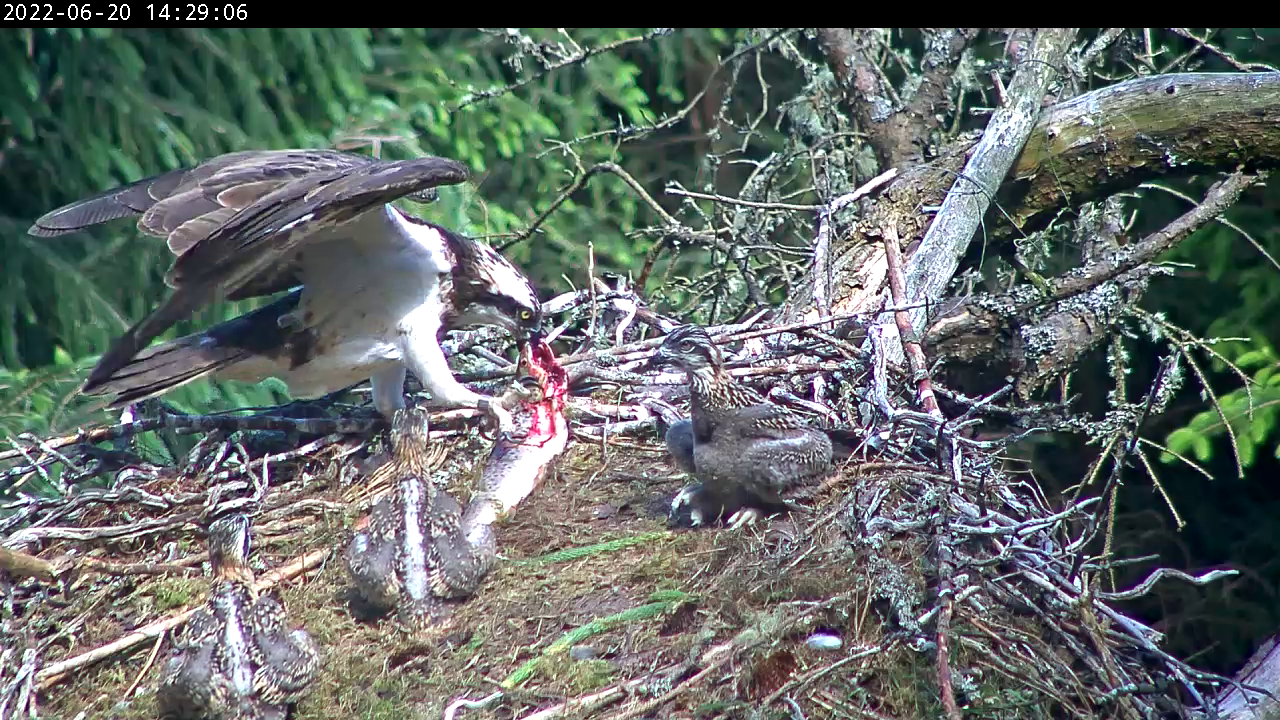 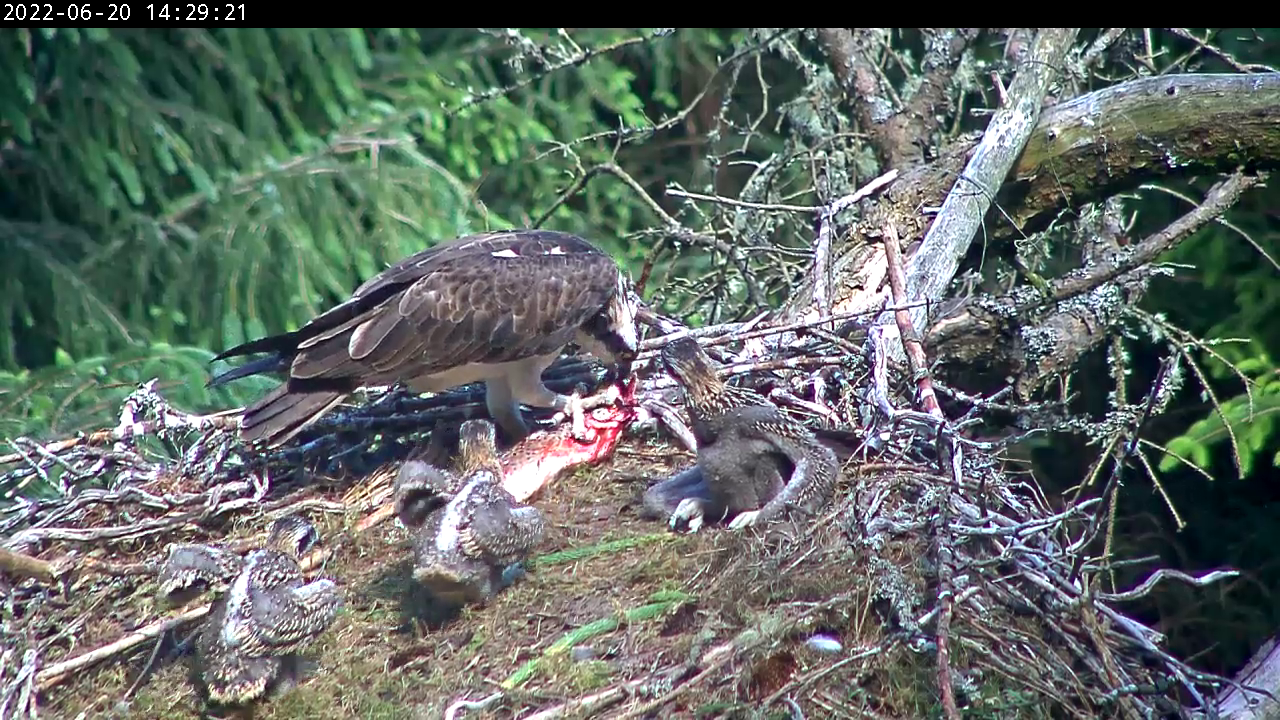 On a daily basis the subtlety of the changes taking place within the chicks as they grow is not apparent but after a gap of 5 days the changes are far more noticeable. From 22 to 27 June, the chicks changed most notably in their ability to stand up on sturdier legs and they are visibly stronger. The feathers are now showing colouring down their backs instead of the dull down.

Mrs O has been a bit more relaxed about leaving them unattended for brief periods in fine weather and when she is away, they will lie down and play dead, camouflaged against the background of the nest. Zooming out the camera to see where Mrs O was when the chicks were alone revealed that she was sitting in a tree not far to the left of the nest. We were able to see the state of the nest tree too while the camera was zoomed out. The old Scots pine is almost completely dead but is safe for now as the branches are not rotten yet. 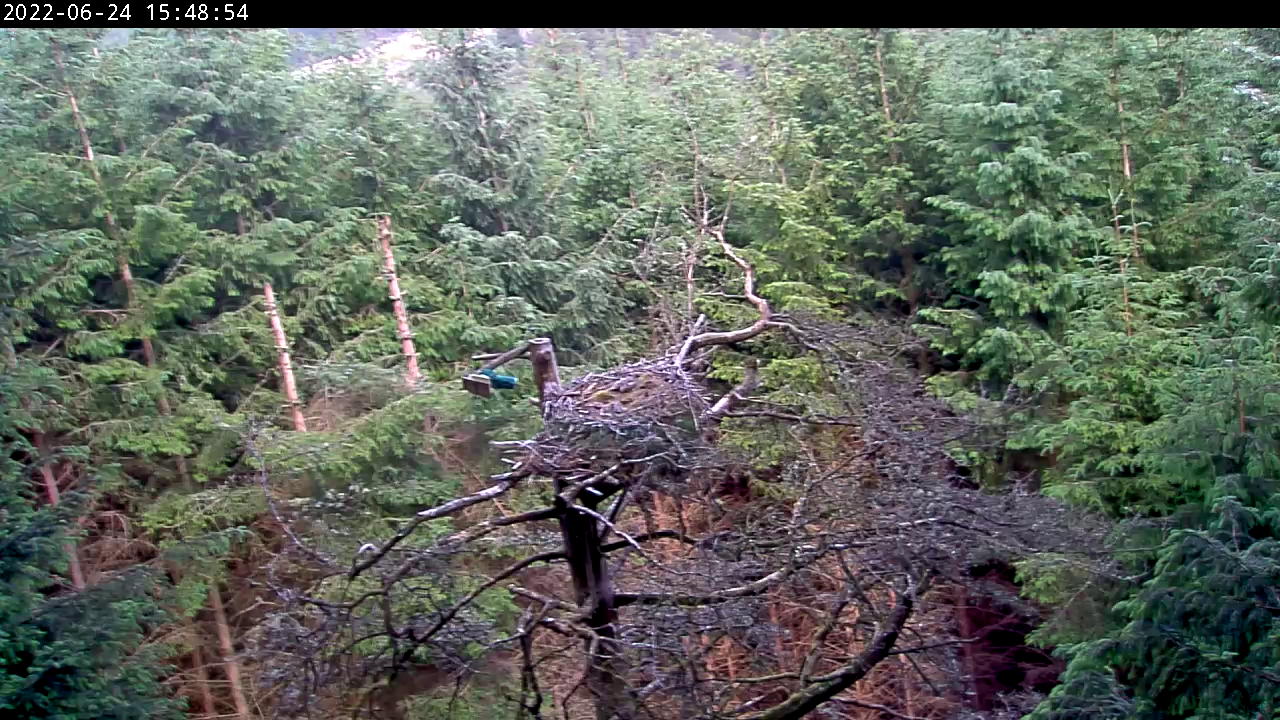 On 28 June the two eldest chicks were 30 days old and the littlest one 28 days old. So far, all is going well for this family. PW3 is proving to be a superb provider of fish and a great attentive dad too, and Mrs O is a super mum. It has been so good to watch this family unit and see how PW3 and Mrs O have grown into parenthood now that they are so much more experienced. Hopefully things will continue to progress well for them as their chicks have reached the half way stage before fledging.