On 30 June the three osprey chicks reached five weeks of age and are looking very impressive with their feather-covered upper bodies. There is still some grey down, below their bellies, but the upper feathering has given them waterproof jackets; just as well with thundery downpours shaking the forest this week. Mrs O still does her best to shield them from the extremes of weather, but her protection isn’t as essential as it once was. Her chicks are now able to regulate their own temperature and insulate themselves with their protective feathers trapping air within the downy layer. 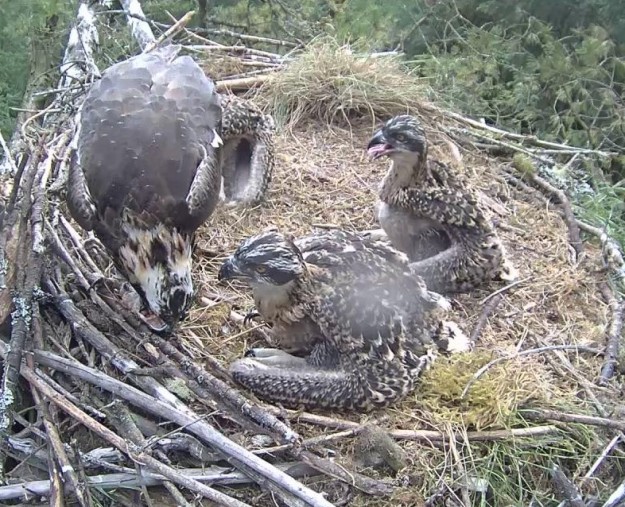 The temperature has lurched from scorching heat to a damp cold during the course of recent days. Mrs O has shielded the young from the hottest sun but they can easily withstand periods left alone providing there is no threat from predators.

Sometimes Mrs O is torn in her decision whether to shelter the young or to feed them, as was evident on Sunday when a good fish was brought in by SS. Mrs O appeared agitated and indecisive about feeding as the rain had just started. Her hungry young were pretty bold, standing and begging for food, leaving her with no option but to feed them. The chicks are always fed in a pecking order with the boldest and biggest being first in line. This strategy is one of survival – when times are tough and food is scarce, this ensures the fittest and strongest survive, the frailest unfortunately left to die. However, the food is in plentiful supply this year and there doesn’t seem to be any worry for the last chick. It can barely stand, it’s so full of food from the bumper crop! Dad, SS, seems to be so efficient in his hunting that he will sometimes bring a meal in when they are still full from their previous one. 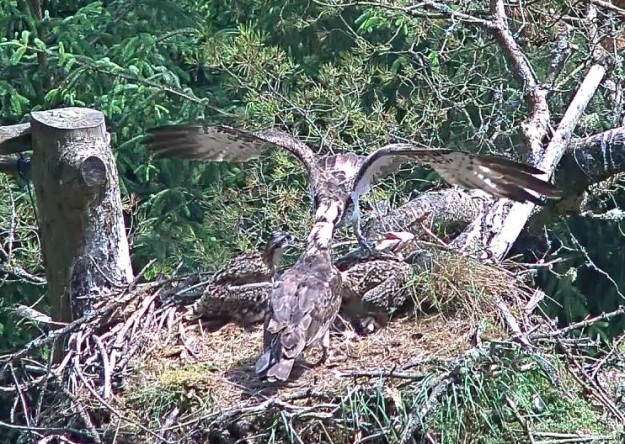 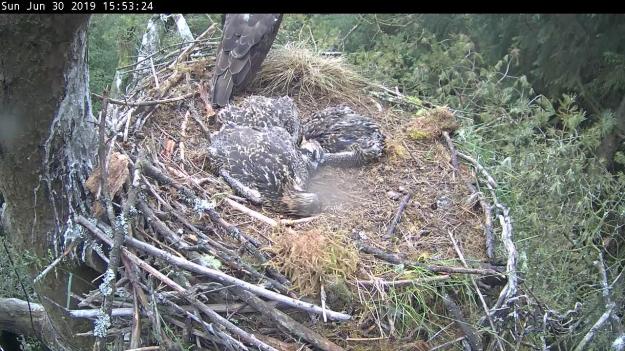 We are full up

It’s hard to say – and I don’t want to tempt fate – but the young birds seem more robust and stronger than last year’s brood. I hope that isn’t just wishful thinking given the fate of Tweedledee and Tweedledum.

They are still at least three weeks away from fledging but, so far, they look to be developing healthily and with plenty of good nourishment. The boldest and strongest chick does tend to rule the roost and is occasionally quite dominant over the other two. Their reaction to this behaviour is not to fight back but passively play dead and turn away until it stops. Perhaps the dominant chick is a Mrs O ‘mini-me’ - a feisty female in the making, just like her mum. The other two perhaps take after SS, as we have all witnessed his reaction to her squawking and stomping about the nest in the past: he turns away and sometimes flies off. 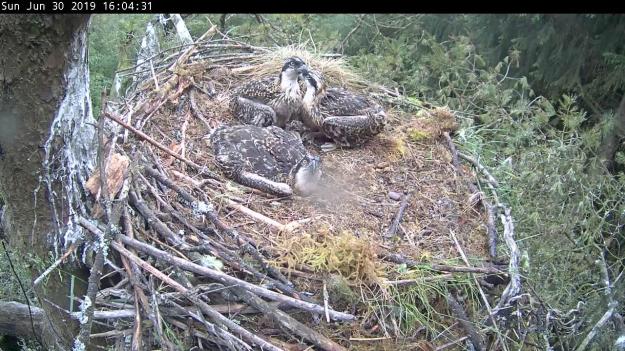 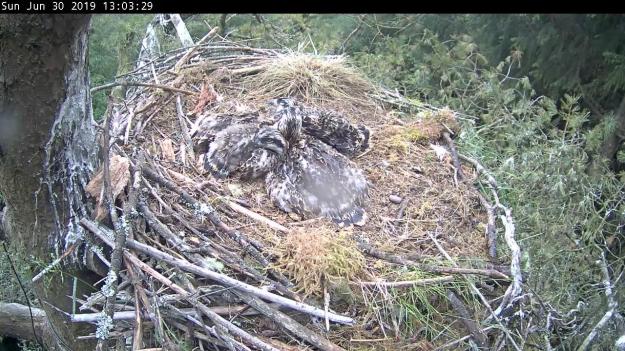 All is well with the family and they are doing very well, although there is the occasional threat from unwelcome visitors. We have witnessed some mantling and distress from Mrs O, with both adults calling and staring skywards as the shadow of another bird passes overhead. It’s most likely another osprey checking out the territory. This can ruffle their feathers and cause disruption, although there’s been no real danger so far. 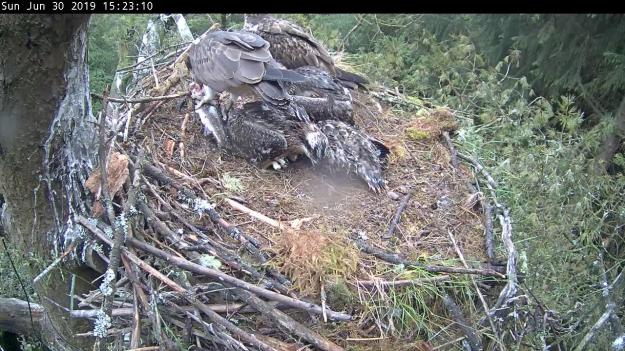 Further afield, we have heard some great news that a Tweed Valley bird from a nest site in 2017 has been spotted up at Lochter in Oldmeldrum, Aberdeenshire. The reported sighting was sent in to the official osprey site and the bird was photographed by Mark Sullivan who captured this great shot, clearly showing the ring number PY3, on 10 June. This two year old bird has successfully migrated with this being its first return to Scotland. It’s too young for breeding yet, but it will be exploring the country, scouting for prospective nesting territory for the future. 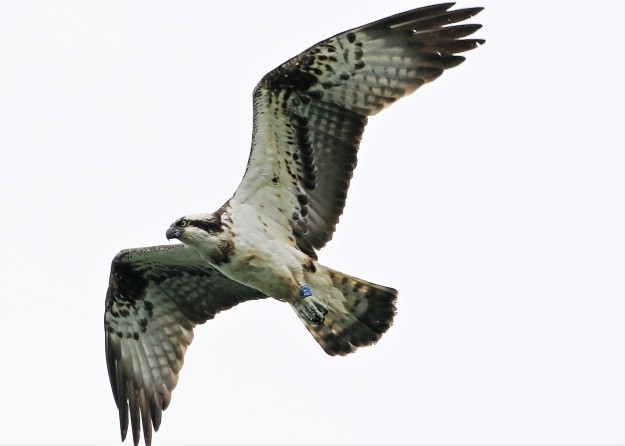 Welcome back to Scotland PY3. Photo by Mark Sullivan.