There have been no sightings of Mrs O this week at the main osprey nest so it is most likely that she has started her migration and has left her family now. This season seems to have flown by so fast and it’s hard to think that we have to wait until spring to see if she will return safely again. This magnificent female osprey that we have really come to admire is the established matriarch at the main nest site. She will return to her same territory to breed every year providing she makes a safe migration and has a successful season at her wintering grounds, wherever that may be. Possibly she travels as far south as Senegal or Gambia in Western Africa where many of our ospreys spend the winter months.

Her three offspring remain behind with their dad PW3 who was last seen at the nest on 15 August as he dropped in while one of his sons was sitting on a lower branch. He didn’t bring a fish and his visit was brief as he took off above his son and flew away again. 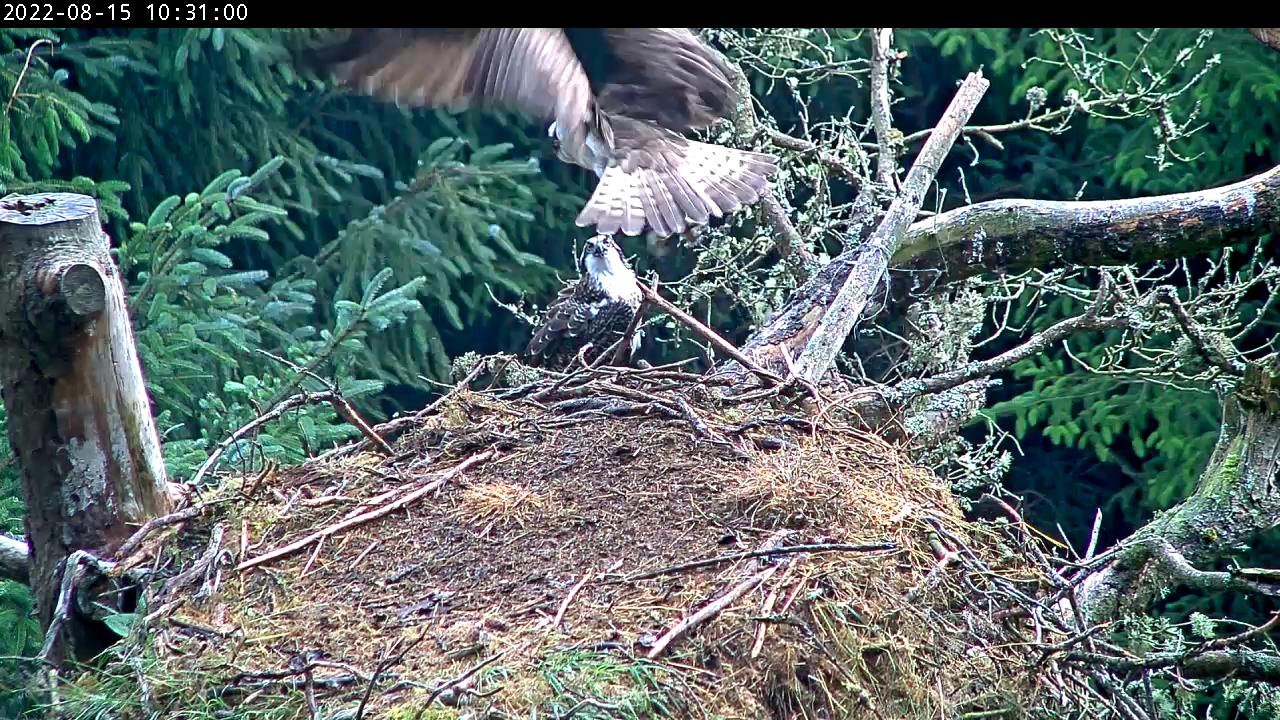 PW3 flies over his son

Unlike Mrs O flying off to an unknown destination, we will be able to follow the journeys of her three sons who remain at the nest site for now. We can follow the data transmitted from their trackers to find out where they are once they begin to migrate, and we will be sharing the information with Sacha Dench and her team leading the Conservation Without Borders expedition, The Flight of the Osprey.

The three satellite tracked young birds are becoming very adventurous now. They are really getting around the area and flying with confidence on further trips away from the natal site. Tweed (706) flew to the Yarrow Valley on 14 August which is the neighbouring valley to the Tweed Valley. 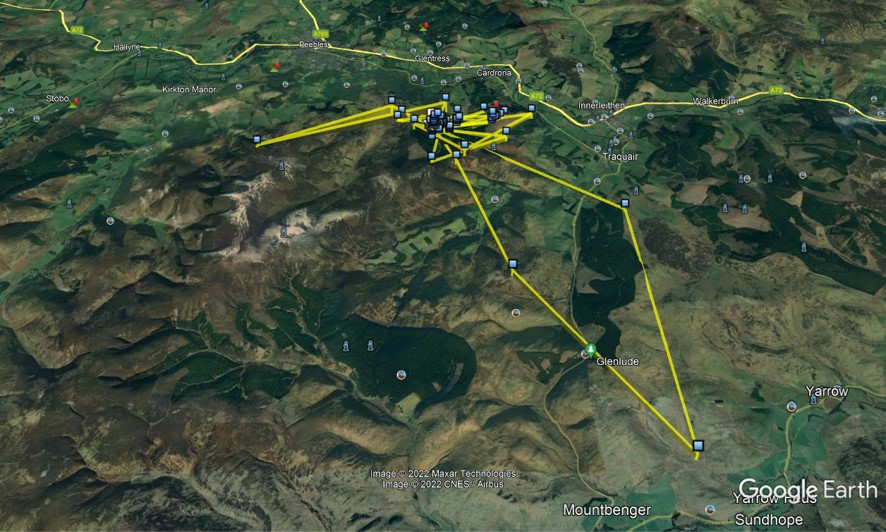 (706) Tweed takes a flight over the Yarrow Valley

Kirk (707) flew on his longest journey since fledging, a round trip of 87km, reaching as high as 688m in altitude and averaging 33kph speed. He flew south beyond Yarrow Valley to Craik forest and high up in the hills to the east of Eskdalemuir before returning to Peebles. His trip out was from 1.30pm to 4.30pm on 14 August. 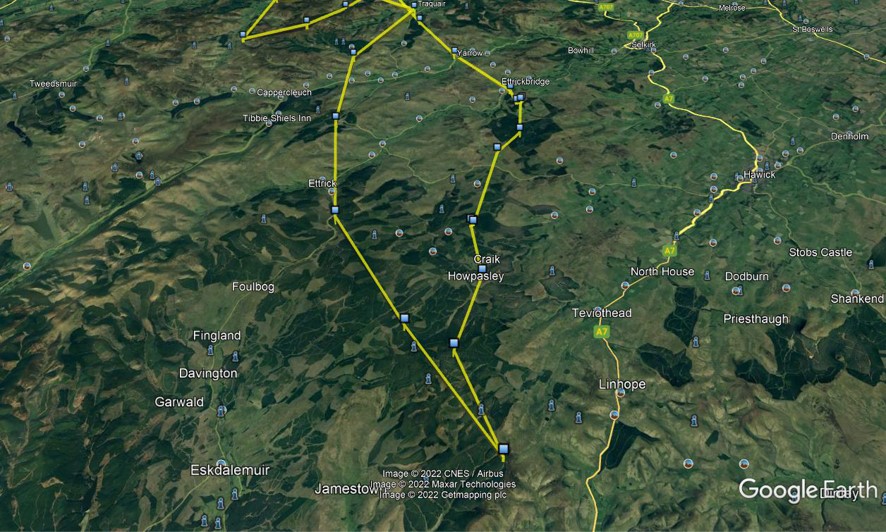 Glen (708) has also been adventurous and was exploring the next valley too on 12 August. He was flying high above the hills looking down on the Yarrow Valley below. He reached a highest altitude of 1,111m above sea level, way above the hilltops, and was travelling at a speed of 57kph at that height. 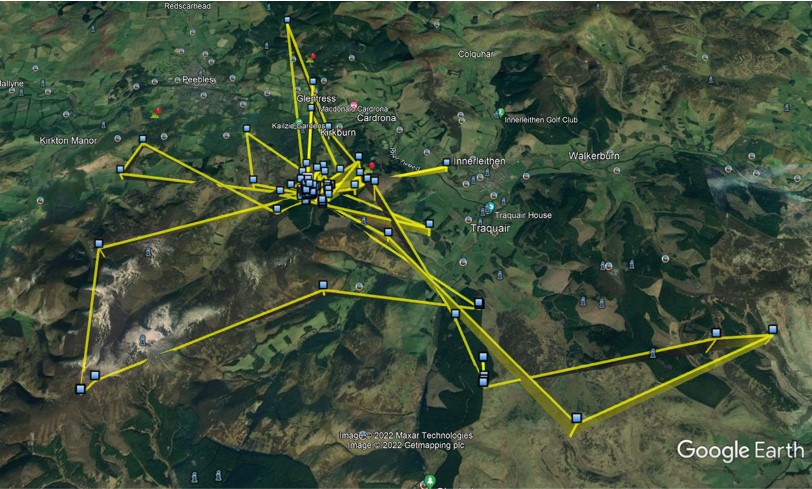 All three young ospreys were back at the nest site at 9am on 14 August and PW3 is still providing for them. They will remain for a few more weeks yet and most likely begin to break up and leave by early to mid-September. 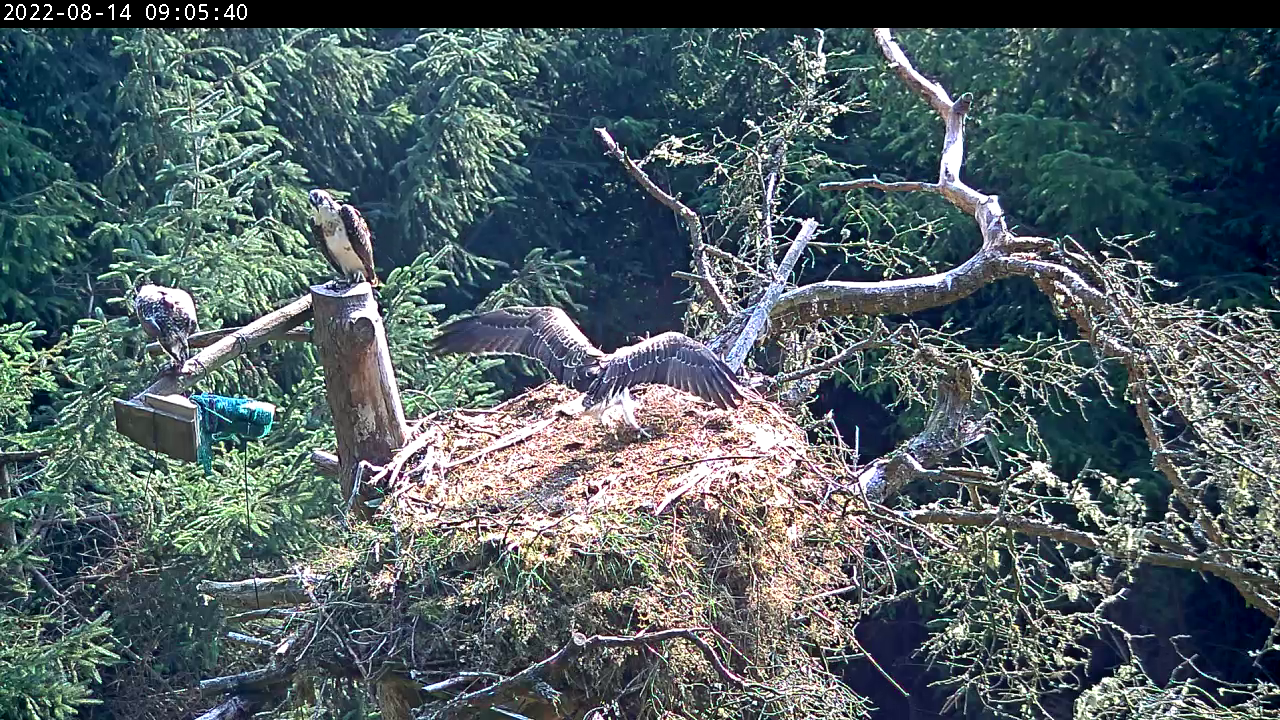 A rare sight to see all three offspring at the nest now. Taken 14 August.

We received great news from Kielder Ospreys that a former Tweed Valley bird visited their neck of the woods. Originally from the West of Peebles nest in 2019, a female (blue ringed 330) visited Kielder nest site 4 5A on 12 August. She has become a familiar visitor there. She was there in May this year too and she was checking out nest sites at Kielder in 2021 as well. Her brother also visited about the same time last year. She never settled on any known nest site this year and she certainly likes the Kielder area to visit and land on the nests there. She is old enough to breed and the fact that she hasn’t been seen since May might mean that she did breed this year at an unknown site to us and is now heading south on migration. 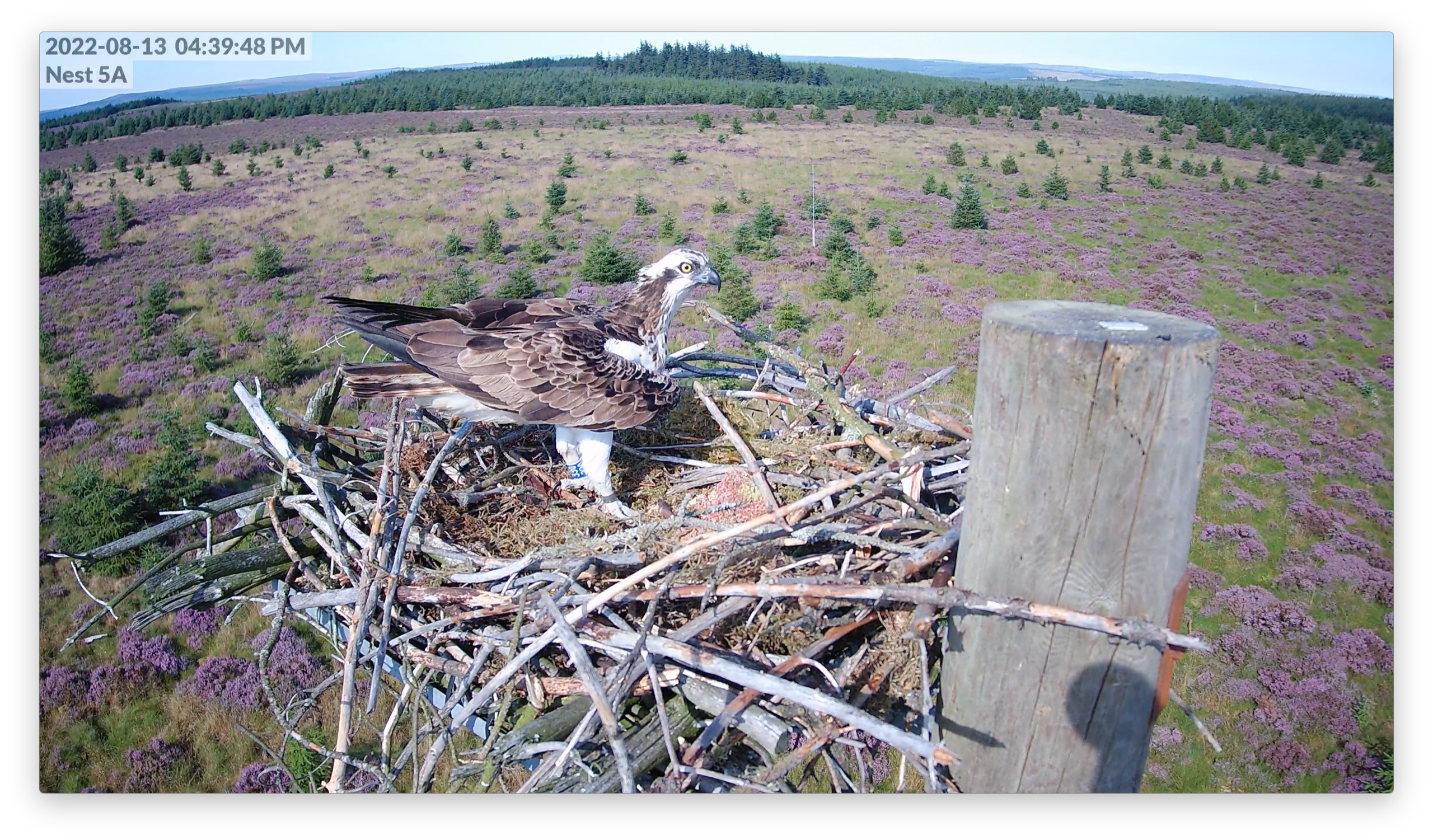 We also received news that a new nest in the Tweed Valley area has been successful in rearing one chick this year. The parents are BTO ringed male and a blue ringed (110), female from the Black Isle just north of Inverness where she was ringed on 9 July 2018 and was one of a brood of two. 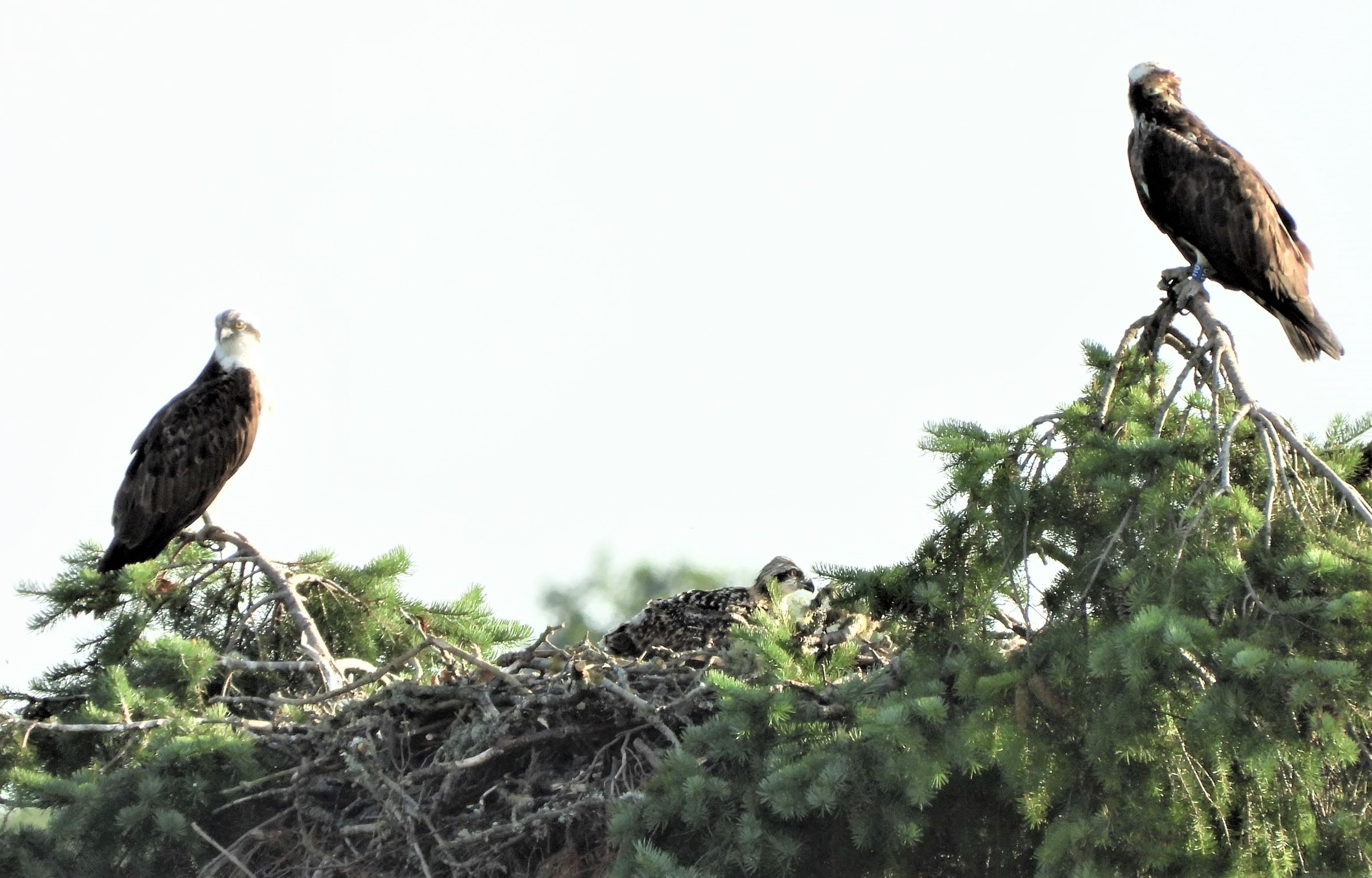 It is lovely news to hear that she finally settled on territory of her own and has bred successfully here in the Scottish Borders on a nest that they built themselves, not an artificial platform.