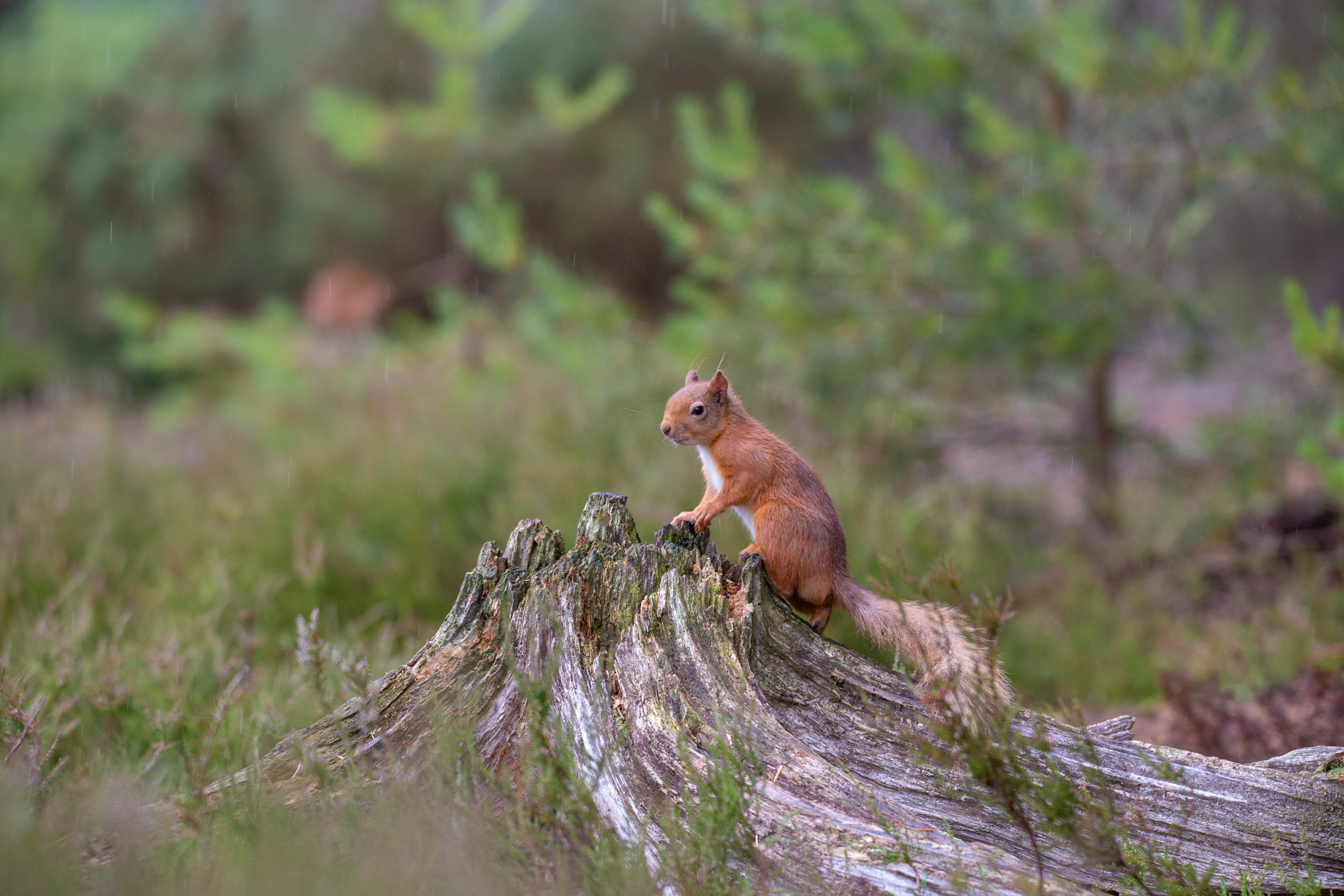 The red squirrel is an iconic part of Scotland’s fauna. Though they are active during the day and do not hibernate during winter, they are not always easy to see, making their copper fur and fuzzy ears a delight for those who are lucky enough to catch a glimpse as they leap between trees.

Most of the time red squirrels are solitary animals, occupying areas between 3 to 12 hectares (and sometimes more) depending on the season, population density and food abundance. Our woodlands provide them with essential habitats, such as food and shelter. Red squirrels live in dreys, or resting places, and are known to build multiple dreys within their home range area.

Red squirrels and their dreys receive full protection under Schedules 5 and 6 of the Wildlife and Countryside Act 1981 (as amended), protecting them from disturbance, damage and destruction. We must therefore consider red squirrels in all stages of forest planning. Under current management, we carry out surveys to identify squirrel presence and drey locations, though this can be challenging in dense conifer woodland. We also aim to minimise disturbance during red squirrel breeding season, and we use squirrel friendly felling techniques wherever possible. Understanding more about red squirrels’ ranges and how red squirrels use their dreys can show us how effective these practices are.

Though we work hard to ensure we are operating in the best possible way to protect red squirrels, we still know very little about the impact of forest operations on them. We are currently collaborating with Dr Louise de Raad, Head of Forestry and Conservation research at the University of the Highlands and Islands (Inverness College), to find out more about the response of red squirrels to forest operations.

The research project, led by Dr de Raad, aims to understand how red squirrel home range, drey use, breeding activity and population density is impacted by thinning and clear fell operations. To do this, red squirrels are fitted with tiny radio tracking collars and their movements are monitored before and after operational activity takes place. The project has also investigated whether nest boxes could be used as a mitigation tool.

Preliminary findings of the research project

Felling: Early results show that red squirrels will move to adjacent woodland after felling work has completed. Interestingly, red squirrels remain in the clear-fell area until the last few trees have been chopped down. We found no mortality due to clear-fell operations to date. The next step will be to look at clear fell sites with different levels of connectivity.

Nest boxes: Results suggest that nest boxes can be a useful conservation tool to mitigate the impact caused by forest operations when deployed in sub-optimal habitats with low food availability and low densities of red squirrel populations. This seemed to benefit red squirrels after forest operations – in particular by providing temporary shelter to juveniles during natal dispersal.

Drey surveys: Drey use was highly adaptable and dynamic and comparison of tracking data with pre-operational drey surveys, highlighted the lack of accuracy of such surveys due to the poor visibility of dreys in the canopy.

The red squirrel team at Inverness College UHI continue to work hard collecting data on red squirrels. They are focusing on the behavioural response to clear-fell operations, in hopes of bridging the knowledge gap about the impact of forest operations on red squirrels and the effectiveness of mitigation measures.