Growing up so fast

Growing up so fast

This week at the osprey nest we have witnessed the family feasting on fish until they look like they are about to burst. Father SS is bringing fish in with such regularity that the chicks are being fed to the point of being stuffed and have needed to back off half way through. Their mum, Mrs O, will then finish a meal herself, until even she has had enough. Finally, SS takes the remainder and finishes the fish. After a good family meal, all of them seem satisfied, with nothing else to do but have an afternoon nap in the sunshine. 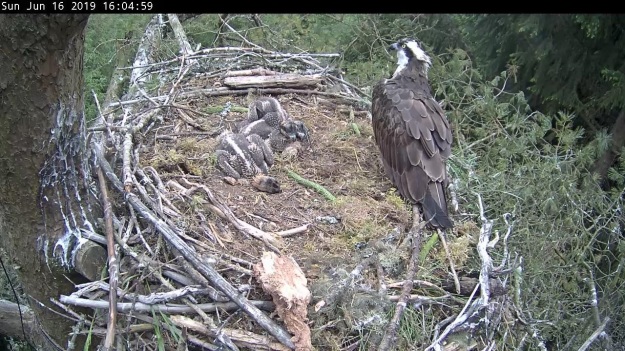 SS is certainly a good provider and the chicks are progressing really well. They have changed so much in just a week. The drab grey down has now been replaced by a brown colour with a spangling of cream, as their mature feathers have begun to grow. They have doubled in size and are much stronger.

Their wings had a noticeable growth spurt too. They are more like long arms and less like the stubby wing-buds of just over a week ago. The chicks’ heads look different too, with feathers, still bearing the dark eye-stripes but with a ginger coloured patch at the back of the heads and chocolate markings amongst the white on the crown. 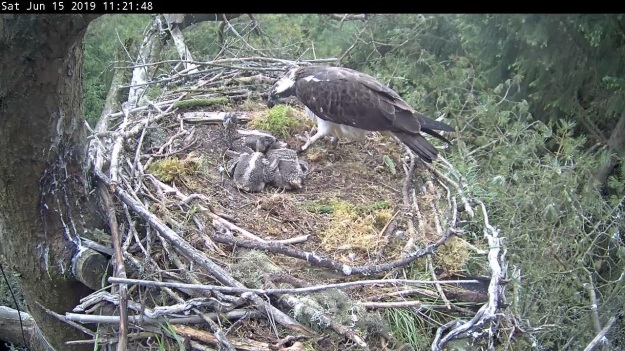 The nest frequently has remains of uneaten fish lying around, which attracts flies. Humid weather brings a host of midges too, which can be seen clouding around the nest. They must be hard to cope with, as the young cannot escape them. Mrs O has been seen bringing in large clumps of fresh moss and what looks to be the fresh growth tips from pine or spruce. It would be interesting to see how they obtain these pine leaves as they grow at the very end of the branches. The ospreys must fly past and snatch them in their talons from the pine trees. It is thought that pine needles are used to freshen the nest and reduce the attraction to flies. 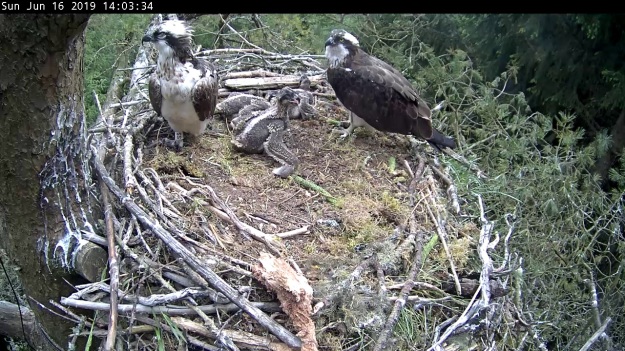 Fathers’ Day was a peaceful looking scene, with the three youngsters sprawled out in the nest. Their wings were outstretched, one chick resting its head over another and all with full bellies, their legs sprawled behind them. Dad snoozed, off to the side of his young, while Mrs O sat to the right of them.

Suddenly, she began looking skywards and calling in alarm. SS snapped out of his dreamy daze and launched himself skyward to patrol the skies and keep the security intact for his territory, while Mrs O remained with the young. Luckily, there were no predators to fight off. After the panic settled down, Mrs O and the young settled back into their Sunday afternoon slumber, drama over for the day, but SS stayed away, keeping a protective eye on their territory. 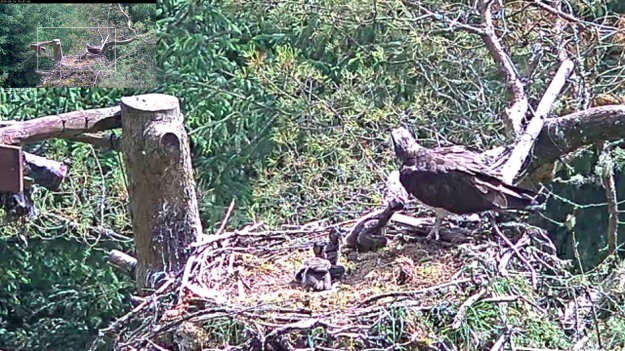 Want a closer look at the ospreys? Check out our highlights from 2019 so far on YouTube: