Hope has made it across the Sahara

The last report about Hope was that she had safely made it across the Alboran Sea and arrived in North Africa. Since then, she travelled down through Morocco and entered into dangerous Saharan territory. She headed into the desert and we have waited with baited breath to see if she would make it across such a harsh landscape after having journeyed so far. We don’t even know if she is capable of fishing for herself yet, as right up until the time she left the nest in Tweed Valley, her dad, White Leg SS, was still supporting her with fish deliveries.

On 13 September, Hope’s signal was lost in the Western Sahara and for 6 days we had not had any tracking signal back and were beginning to fear that she had perished. To be the bearer of yet more bad news was not something we relished. The sad reality of birds lost on migration is the difficult part of tracking young ospreys. Having spent a summer watching them grow and hoping to see them thrive once they leave their parents is nail-biting.

This time, though, we can rejoice – the wait was worth it. On 19 September, the tracking device burst back into life and delivered the data we had been waiting for! Hope did not perish in the desert – she has made an incredible trip and has almost reached Senegal.

Senegal and Gambia are pretty much on our wish list of ‘go to’ places for ospreys to migrate to.

Hope is almost there ,and although not wanting to count any chickens before they have hatched, we’re feeling a lot more relieved that she is out of the desert and onto good osprey territory for a winter stay.

SS is a super hero

When we track birds on migration and realise the stark reality of the high mortality rates, it makes it so much more incredible just how birds such as White Leg SS and Mrs O make that migration multiple times with success. Especially SS, at 20 years old he is a very experienced world-wise traveller. 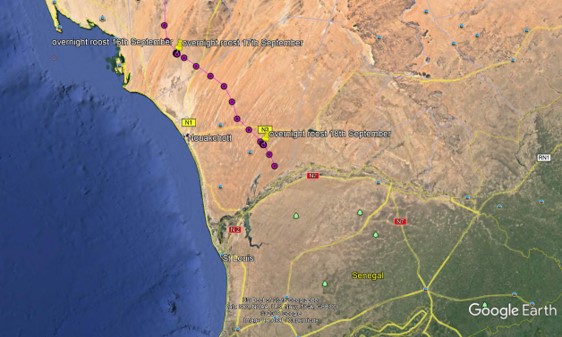 Hope near to Senegal on 19 September