Things seem to be progressing nicely at the Tweed Valley main nest site. We are happy to report there have not been any dramas so far this season. Mrs O and PW3 have three eggs in the nest and the long process of incubation is taking place. PW3 was very late back compared to Mrs O and she had to wait for nearly three weeks for him to arrive. Since his return there has certainly been no hanging about. Mating and egg laying were conducted straight away and we are on course for hatching early June, all being well. 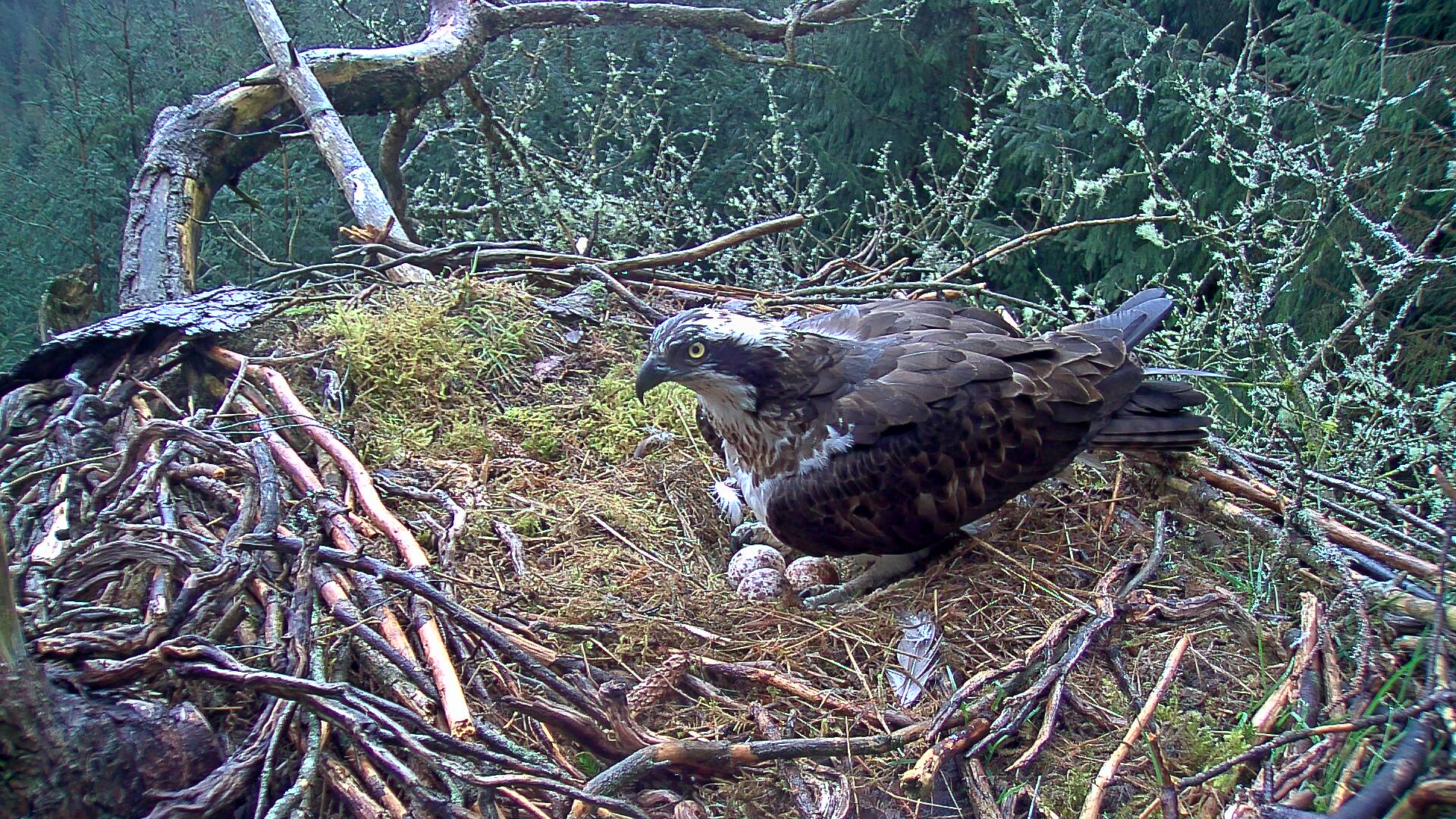 The day-to-day duties of the parents-to-be are divided into incubation and egg minding. Mrs O is incubating the eggs almost full time, interspersed with breaks when PW3 returns and takes a brief turn at sitting.

Mrs O is a far calmer bird than she used to be. She was known for her constant loud calling at the nest site when with her old partner SS, but she is so much quieter now. When she spots PW3, she merely watches as he flies around and then, as seen on 2 May, she perches up onto the post and briefly calls out to remind him she is hungry and needs a break before he departs. On this occasion she seemed to be doing a lot of egg rotation. She turned the eggs at 12:12pm and then, seven minutes later, stood again to rotate the eggs 90 degrees before settling down again. Forty minutes later, she was up and turning her eggs again. Then again at 1:20pm and 2:04pm. She was quiet and seemed relaxed, though, preening in between times, occasionally looking skywards and calling, until she flew off onto a nearby tree at 2:26pm. Ten minutes later PW3 returned and took over nest duty. 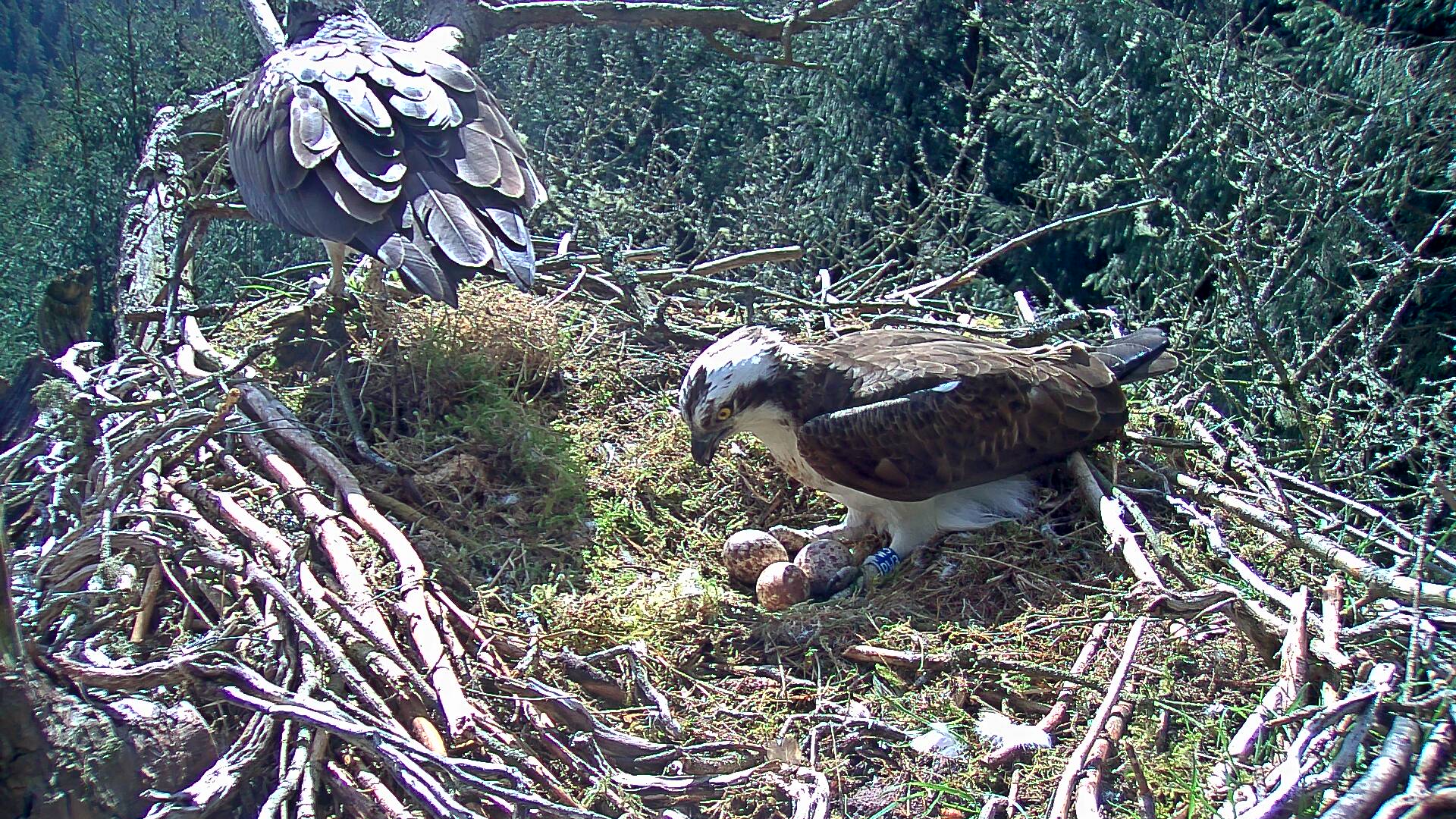 The days are all similar but swapovers have not always taken place when PW3 has brought a fish in. The fact that Mrs O is quiet would suggest an earlier feed otherwise she would be sure to let him know she was hungry. When she has left the nest, they have been for periods of about fifteen minutes before returning to get comfy on the eggs again. 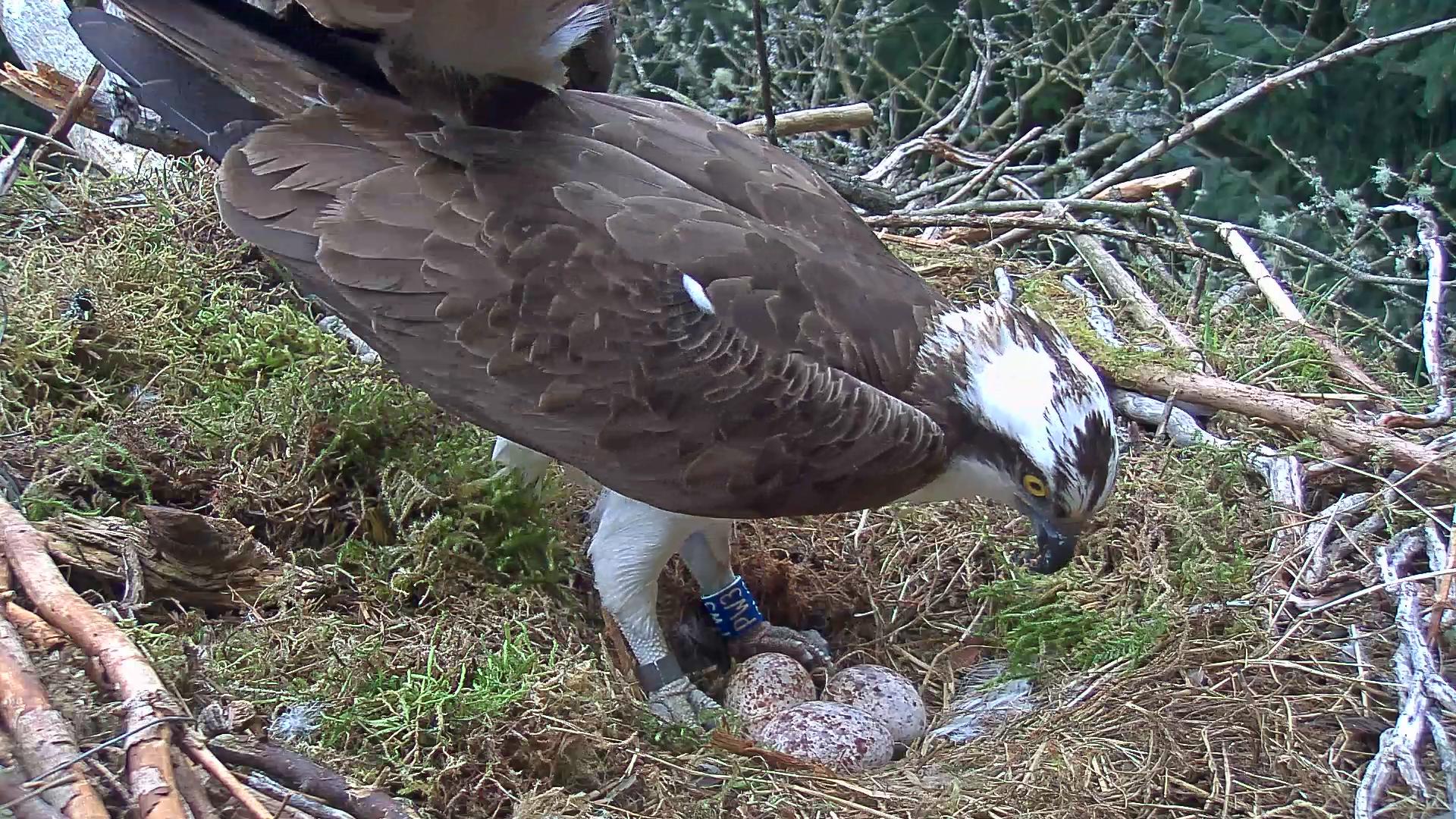 PW3 takes a turn on the eggs as Mrs O leaves

We have had news that there are birds up at the ‘Back up nest number 3’. It was early May before we finally got confirmation that the birds were there, but unfortunately the camera has not been able to relay images and so we cannot see if it is the same pair from last year, (FK0 and the unringed female).

FK0 was a familiar sight flying over Walkerburn and along the River Tweed last year, regularly patrolling the river in search of fish. However, he hasn’t been spotted this year. We will hope to get images from the camera to find out which birds are there.

It is always great to hear news of birds from Tweed Valley wherever they turn up. So far this season, we have had news of a regular returner, a male osprey with ring number FX0 who fledged from the Tweed area in 2015 and has made a number of appearances since. He was a regular visitor to Venus Ponds in Shropshire in 2017 and locals began to hope that he might settle there. He went on to visit Balgavies Loch in Scotland in 2019 and again in 2021. This spring he once again put in an appearance at Balgavies loch on 3 and 4 April before moving on. He was captured in a stunning photograph by Darren Dawson. He is of breeding age and must surely be nesting by now as a five-year-old adult, but he still likes to pop into some well-known sites on his journey north.

Another Tweed Valley osprey made an appearance at Loch Garten on 10 May. This was a female with blue darvic 308. She was not made welcome, as the new resident pair at the nest site have eggs and are settled, so she was seen as an intruding female making a nuisance of herself. She visited the nest site briefly last year too and, given that we are now in May, it is likely she hasn’t settled to a territory of her own yet. She fledged from Tweed Valley in 2019, so she is only three years old and still on the lookout for a good site and a partner. The nest site she came from was an artificial platform erected in 2006 and has been occupied ever since, having had 24 ospreys fledge from there by 2021.

Further happy news came from Kielder Osprey Project that 306 had made an appearance at their number 2 nest site on 30 April. 306, was originally from the first brood of osprey chicks reared on the artificial osprey platform erected on a telegraph pole in 2018. This replaced the dead old pine tree that had been used previously by his parents. He fledged from there in 2019 from a brood of three males. 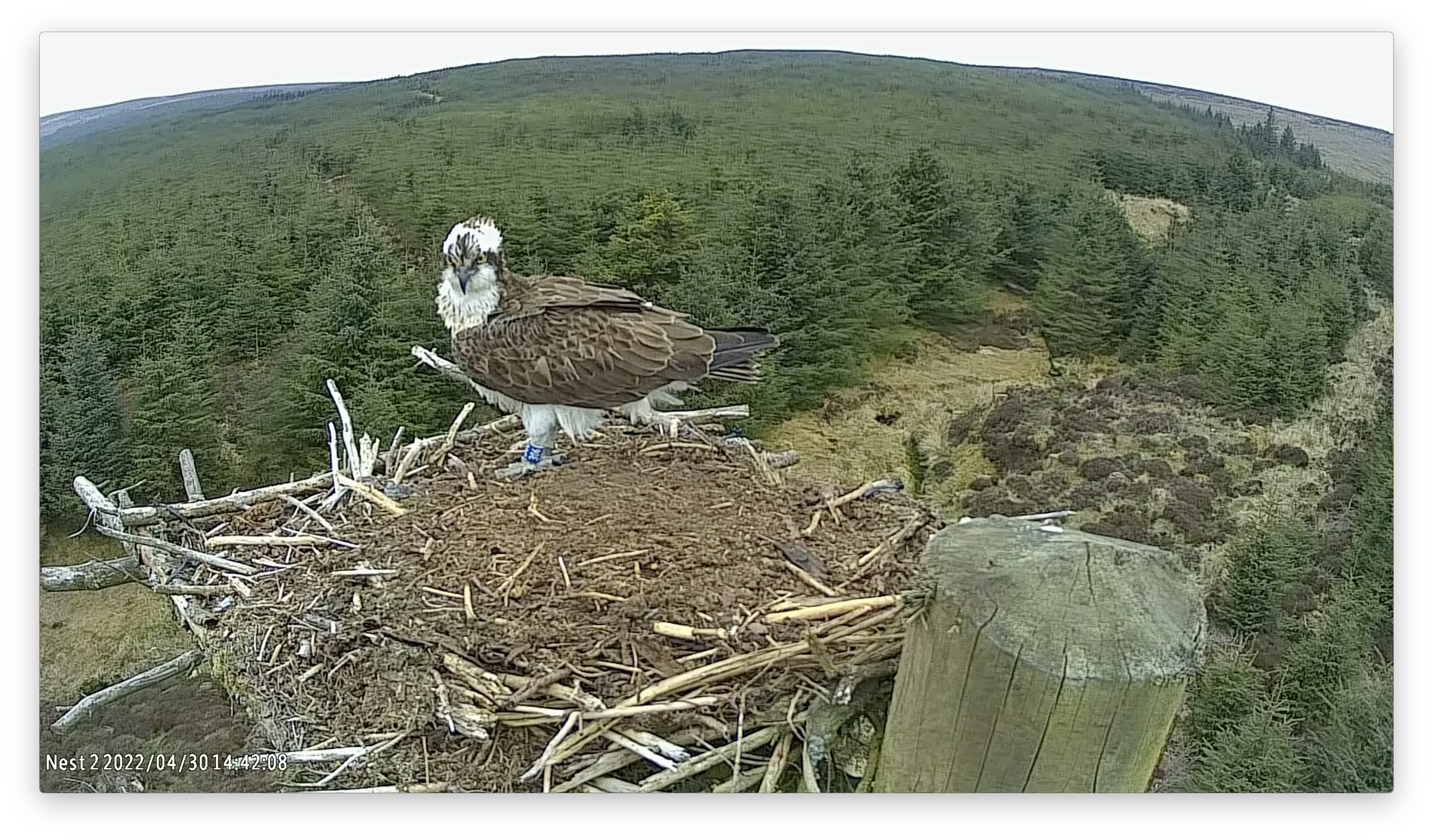