We have much to celebrate at the Tweed Valley Osprey Project this week because, on 29 May, Mrs O stood up on the main nest to reveal that two of her chicks had hatched. The third egg was still visible in the nest but the two wriggly little hatchlings were squirming about and probably feeling very hungry in their first few hours of life. PW3, their dad, arrived with a good-sized fish, but Mrs O didn't seem to want to feed them straight away - so he flew off again, taking the fish with him. Later that afternoon, Mrs O stood up from her little ones again and PW3 returned with the fish (which was now half eaten). She took it from him and began to gently proffer small morsels to the most active of the two chicks who began to feed. It didn’t take too long until the first chick was full and Mrs O proceeded to feed chick number two. 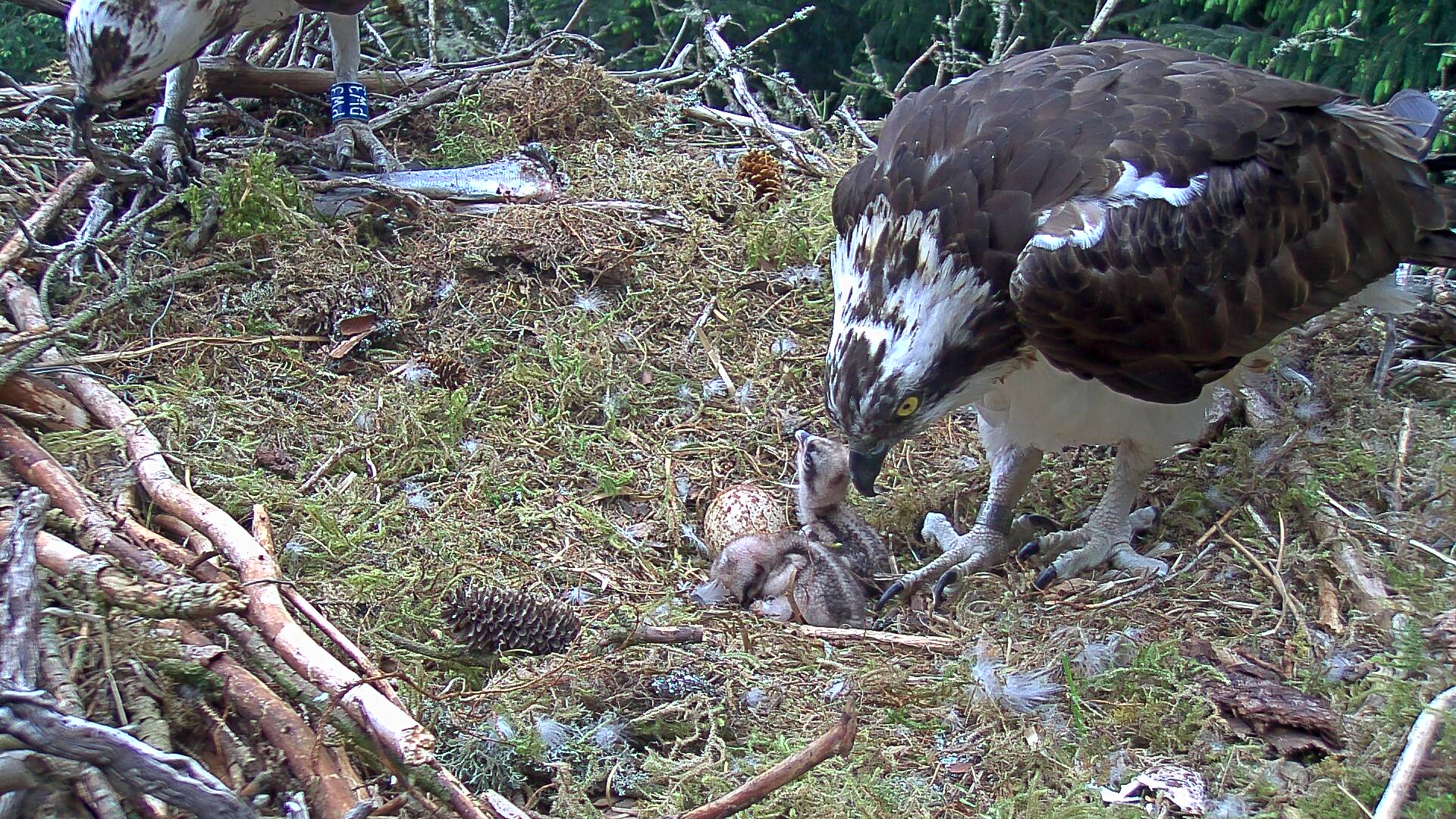 We wondered if the third egg would hatch as it was laid late and was, in fact, the fourth egg to be laid. The first egg was laid before PW3 had returned and it disappeared soon after his arrival. We believe he must have kicked it out of the nest. Mrs O did not even attempt to incubate the first egg. We were unsure about the hatching date because we first saw the two eggs on 23 April and the final egg appeared on 29 April. 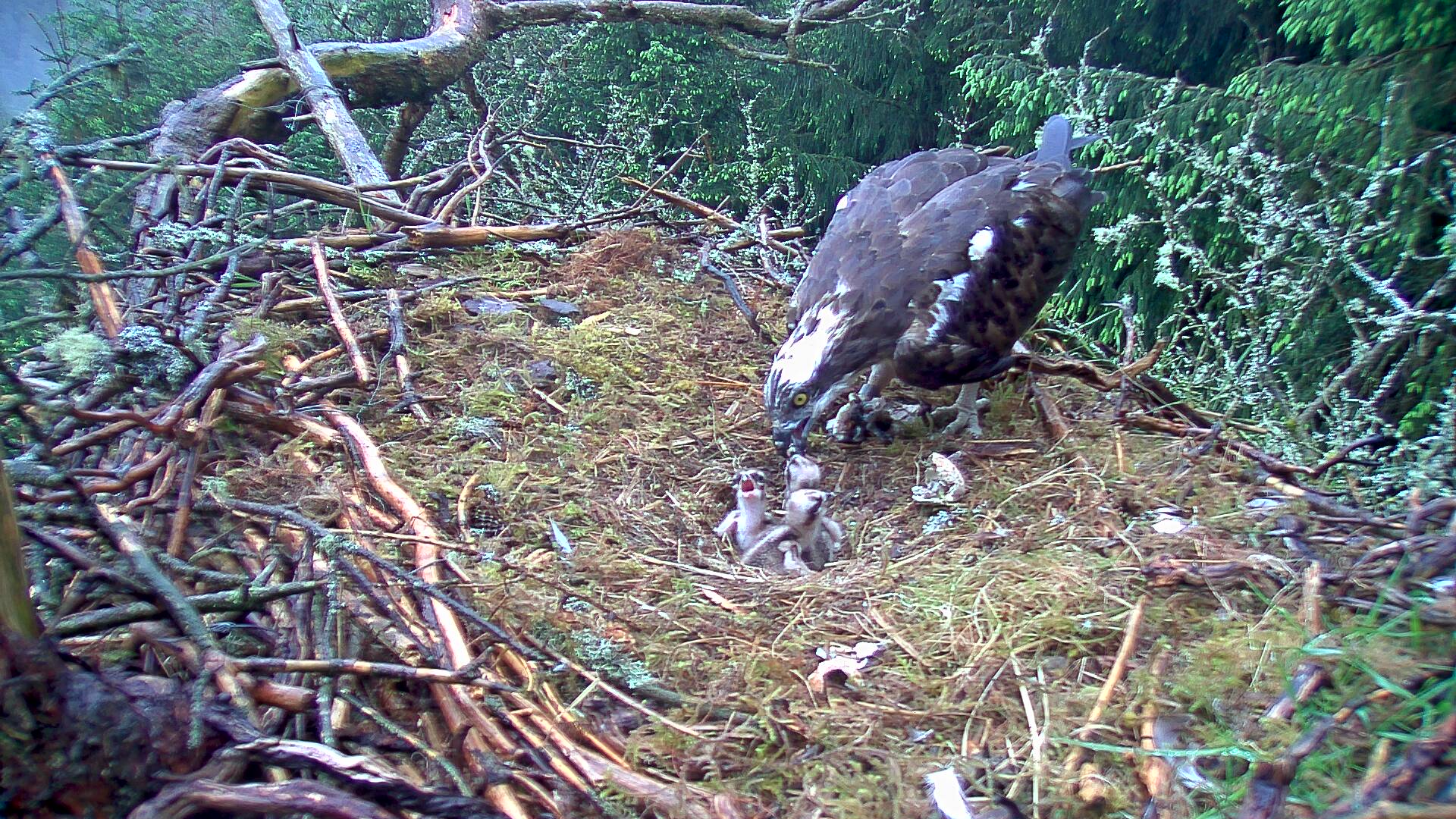 And then there were three

Incubation by Mrs O has synchronised the hatching of the first two together. This happened last year too, although normally we witness hatching a day or two apart. Given the late appearance of the third egg, we were not too sure how it would fare, but the very happy news was received on 31 May that chick number three had arrived.

The little family is now complete and this makes sense of PW3’s behaviour the day before the first two hatched. He was described as restless, often getting up from the eggs, peering down and moving them about when he had his brief stint sitting on the nest. He could probably hear the tapping and little cheeps from within as the chicks used their egg teeth to chip their way out of the shells.

All three chicks appear to be healthy although they have very wobbly little heads due to their lack of muscle strength. As they begin to feed and get stronger, they will become more active. For now, their day is spent sheltering underneath their mum, keeping warm and sleeping until it is time for a feed. Fingers crossed for some mild weather to give them a good start.

We do not disclose the location of nests in order to give the birds a good start without disturbance, but we can direct people to good hot spots where they are likely to see ospreys out hunting in the local area. This year we are taking part in the Peebles Outdoor Film Festival in association with the Eastgate Theatre. Our event - The Tweed Valley Ospreys Trail - will take place on 18 and 19 June between 11am and 12pm. There will be a chance to meet in the Glentress Wild Watch room and see the main nest ‘live-streamed’ on to the screen and hear all about the ospreys in the area. You can then set off on the brand new Osprey Trail, using a new map leaflet to discover osprey viewing hot spots. Along the way, you'll have a chance to meet some volunteers or Forestry and Land Scotland staff who can help point you in the best direction to see ospreys. For more information and to book a place call Eastgate Theatre on 01721 725777 or book online.

One of the osprey trail points is along the River Tweed at Innerleithen. Local man Mike Lamont caught a glimpse of one of the ospreys hunting and hovering over the River on Sunday morning and says that he has regularly watched it there this year and last year. He took a few photos and added them to his Woodside Wildlife Facebook page where he posts his captured images of wildlife.

Photos of an osprey above Innerleithen taken by Mike Lamont

The Osprey Trail Map will be available from the Glentress Wild Watch Room during the Peebles Outdoor Film Festival and thereafter.

Find out more about the festival and book for our event at:

We're delighted to now be able to bring you highlights videos from the nest! We'll be adding these to our YouTube playlist as the season progresses. Remember, you can also watch our main nest camera live during the day too.