White-tailed eagles, or sea eagles, are an endangered species that was re-introduced in western Scotland in the ‘70s. Latterly, 85 birds from Norway were released on the east coast of Scotland in 2009.

These large birds of prey have strong legislation protecting their emerging population, which has created a new dynamic on how we manage our forests alongside these raptors who tend to build their nests and roosts in woodlands, cliffs, and crags.

Our main goal is to keep learning how to co-exist with these animals, but because these birds are relatively new, our understanding of their behaviour is always changing. 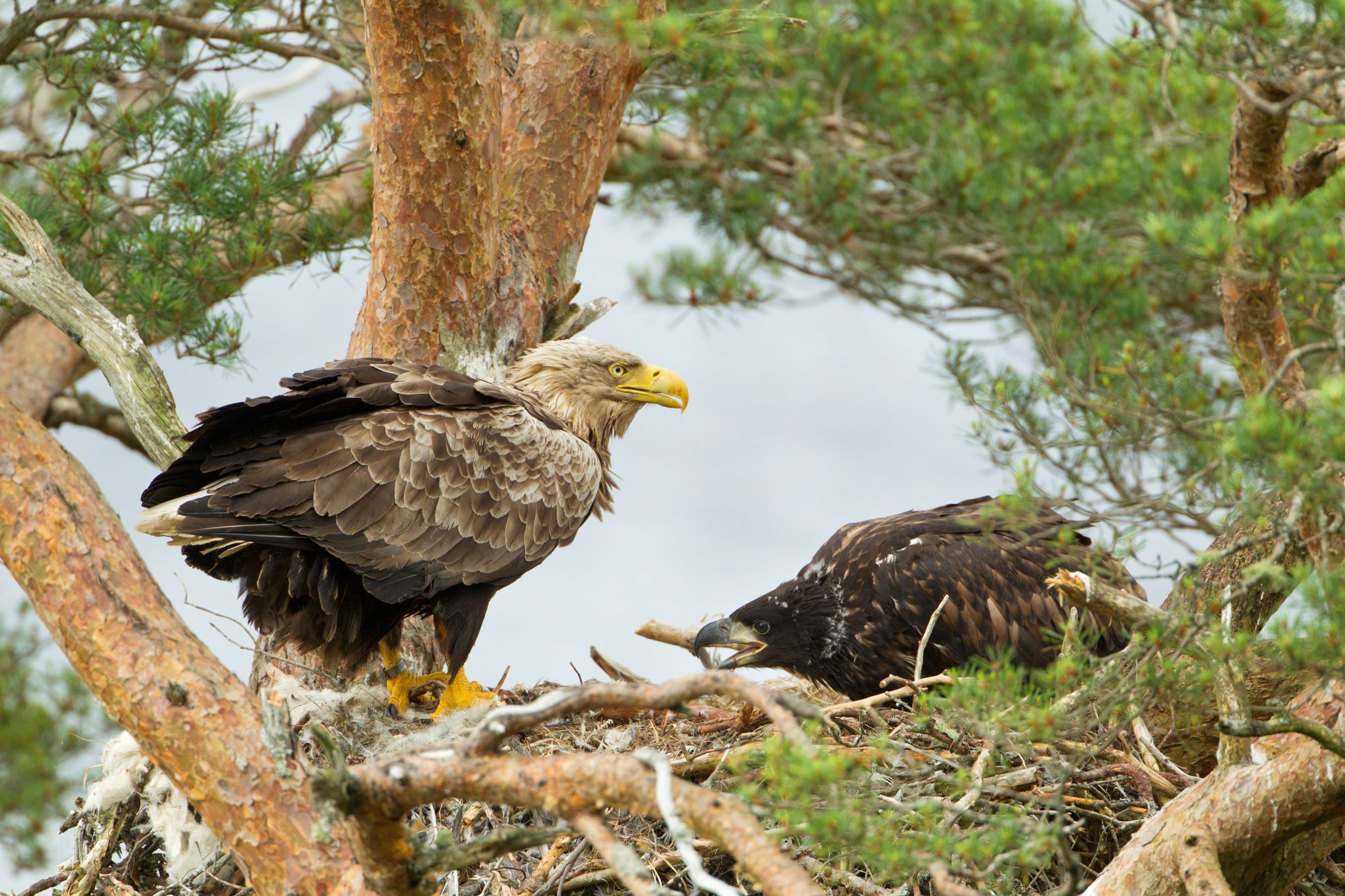 Managing our woodlands for sea eagles

Give them space. We restrict forestry operations within a 250-metre radius of a sea eagle nest and limit operations around a 500-metre radius during their nesting season. This is when the birds are particularly sensitive to disturbances. We therefore carry out forest management activities near nests during the September to January period.

We also encourage people to give these birds of prey space when they are visiting our forests for leisure.

We want to take a proactive approach to nest management which can help dictate where the birds will nest, and limit the restricted areas to quieter parts of the forest. We can do this by creating alternative nests for the birds in areas we want them to be, or plant/keep ‘retention’ stands which are ideal for nests in areas we are felling or thinning.

In some places in Scotland, farmers believe that  white-tailed eagles have a negative impact on the viability of their sheep flocks.  To discourage the birds from nesting near fields full of sheep, FLS has been felling trees near such places and providing nesting platforms or suitable nesting sites elsewhere.

The birds are protected from repeated harassment, which means it is illegal to disturb a nest or roost. We work with the White-tailed Eagle Project Team to monitor the roosts built on FLS land.  Sea eagles will sometimes turn established or abandoned roosts into nests during mating season.

Lightly thinning around these roosts can help encourage them into becoming nests by making the trees more wind resistant, so understanding where the roosts are is an important part of implementing these strategies.

FLS also works with partners to test if the provision of ‘food dumps’ during the breeding season will prevent the eagles from foraging on agricultural ground.  Food dumps are sites that are easily accessed by the eagles and where deer offal or ‘road kill’ is regularly placed for them.

We are also supporting the National Stakeholder Group's satellite-tagging project, and are trying out different management techniques such as the diversionary feeding and nest-site manipulation in hopes of keeping the birds away from livestock.

This new relationship between forest operations and sea eagles is ongoing. It will take time to figure out how we can learn to operate in a way that works with this growing population.