Tweed Valley Osprey centres have remained closed due to the Coronavirus outbreak. Thankfully, the remote camera at the main Tweed Valley nest has been switched on and is relaying live streaming to the online Forestry and Land Scotland website. In the absence of our dedicated volunteers who would normally be watching the screen for any exciting action, we find ourselves at the mercy of a static live camera stream giving only a distant view of the nest and ospreys. The signal strength has been a little disruptive also so far this season.

SS has not returned

We have been watching intently to see if we can figure out what is happening and, so far, we’ve seen the return of the female osprey affectionately known as Mrs O on 27 March. This was on target and all set for a good start to the season. We have also watched, waited and hoped for the return of White Leg SS, our long term male osprey, who would be 21 years old this year but sadly he has not made it back so far.

A new male with a blue leg ring

Mrs O waiting on the nest 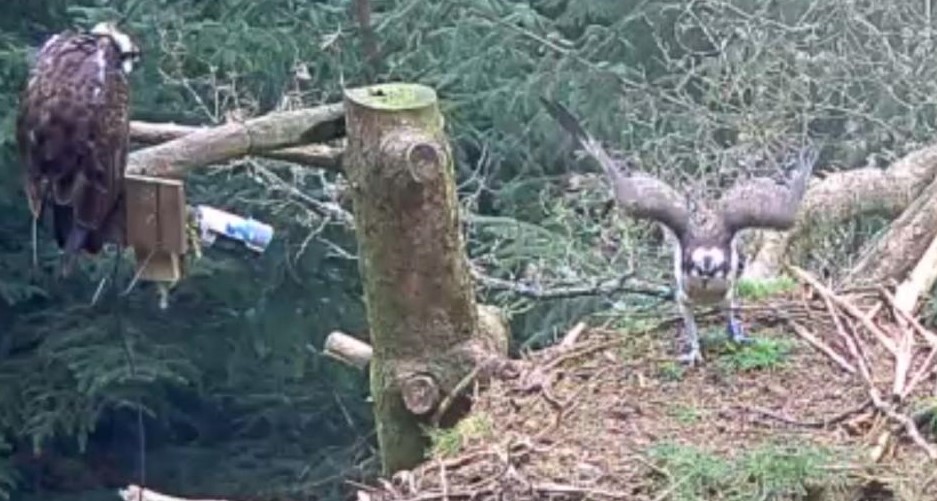 O waiting for White SS and seems uninterested in new male in attendance. 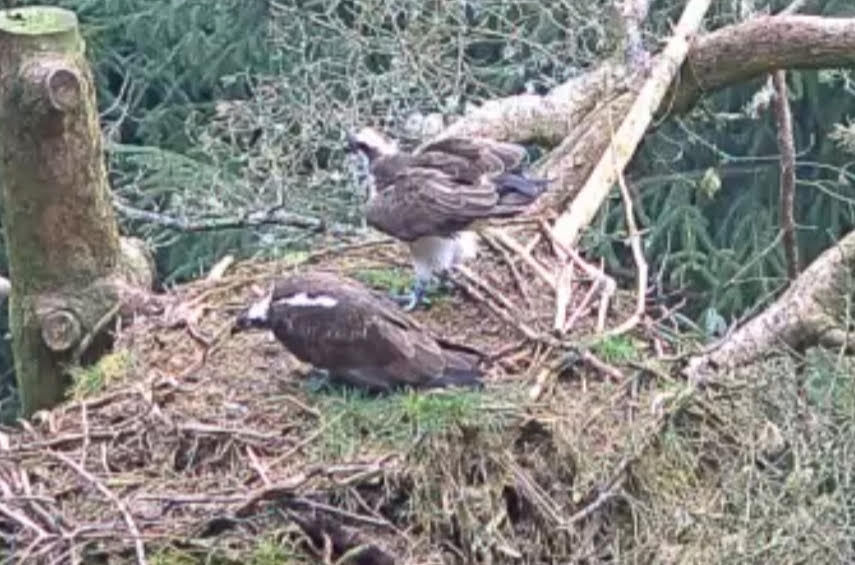 Mrs O was seen waiting for him at the nest for days on end but eventually a new male made an appearance with a blue leg ring. He was quite persistent and attentive, appearing at the nest with fish. To begin with she remained uninterested and he ate the fish himself. But as time wore on, her resolve to wait for SS diminished. A bond began to form between the pair and soon he was bringing fish for Mrs O which eventually led to mating. It hasn’t all been plain sailing, or without drama, for this new romance though, as he has had to compete with another male osprey that also has a blue leg ring. 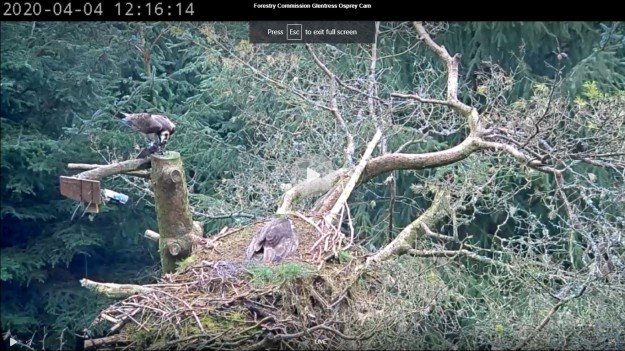 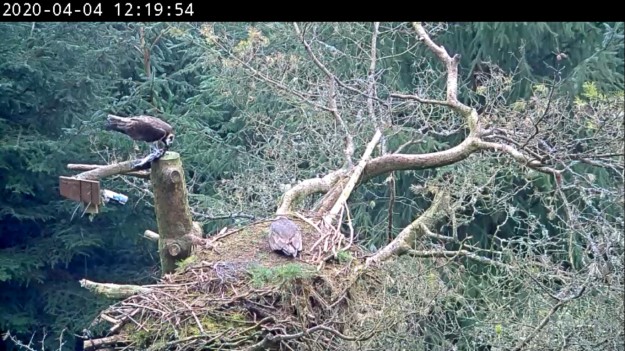 Three is a crowd

This second male also brought fish and ate it at the nest in full view of the first new male. Mrs O, meanwhile, mantled and hunkered down in the main nest. Not that she is the shy and retiring type but perhaps she wanted to let the scenario play out and the best man win! Anyway, the interloper with the fish was eventually chased off by the new beau and the pair now seem to be settling quite quickly into their new relationship. 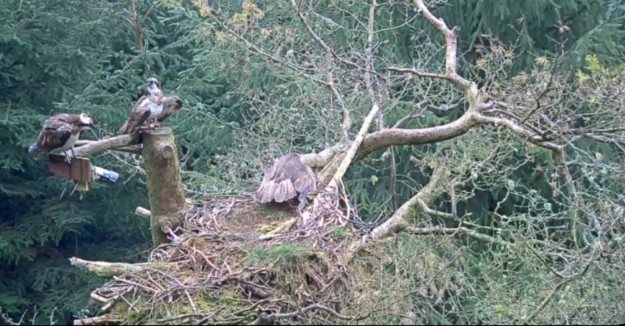 One of these blue ringed males needs to go 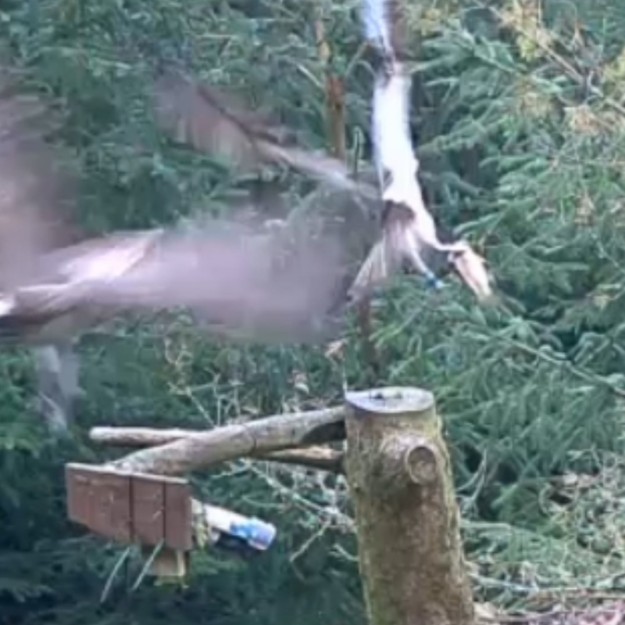 Chased away by the new boy 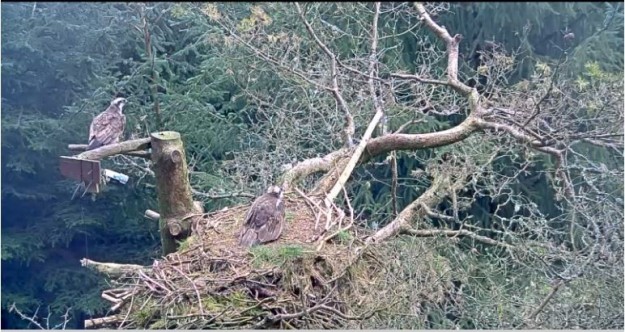 The new pairing and eggs laid

We were still wondering if there might be a chance of SS turning up late and reclaiming his partner and territory but there has not been any sign of him. On 8 April, the nest started to appear more homely with moss and some new sticks added into it. A scrape in the centre could clearly be made out and, sure enough, Mrs O laid an egg here on 16 April. It was difficult to see clearly at first – and we did wonder if there were two eggs – but we were able to grab a very clear image of the single egg later that day. 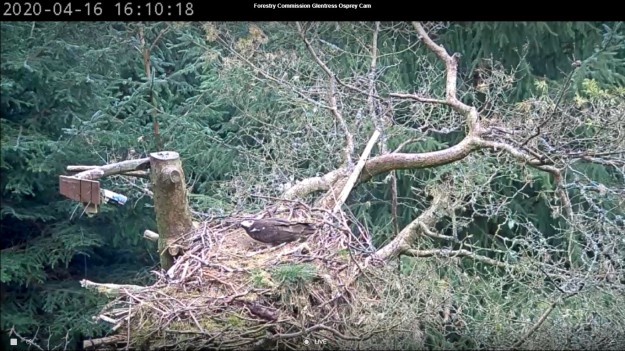 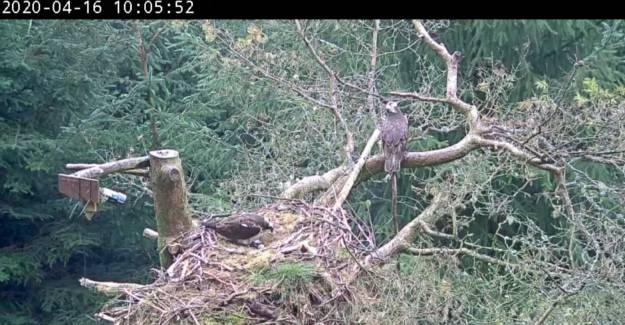 The distance of the birds from the camera means we cannot read the leg ring of the blue ringed bird but we can, at least, follow their progress and wait to see further egg laying and Mrs O settling into incubation. We will keep watching to see how many further eggs she lays and to see if the new blue ringed bird matches the excellent partnering and parenting skills of the much loved and most missed White Leg SS.

Mrs O now has three eggs and has settled with her new partner, blue ring male. There have not been any sightings of White Leg SS and so we must fear the worst for him. He was a legend and held the main nest territory for sixteen years in Tweed Valley.

He will be missed but at least his last partner, the young female Mrs O, has found a new mate to start her own story in Tweed Valley. We do hope that this new pairing will be successful. The clutch of three eggs will hopefully produce fit and healthy chicks which we expect to hatch shortly after 25 May. 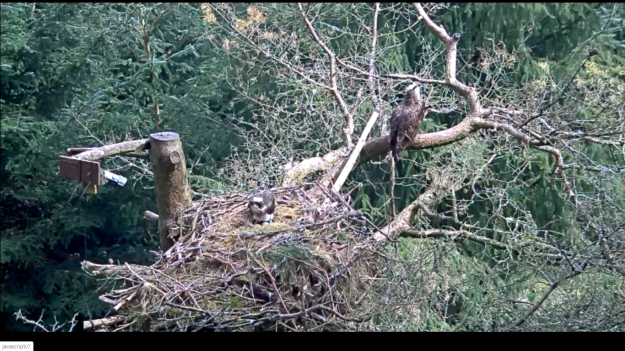 Mrs O eating on the perch, new blue ring male takes his turn to look after the three eggs 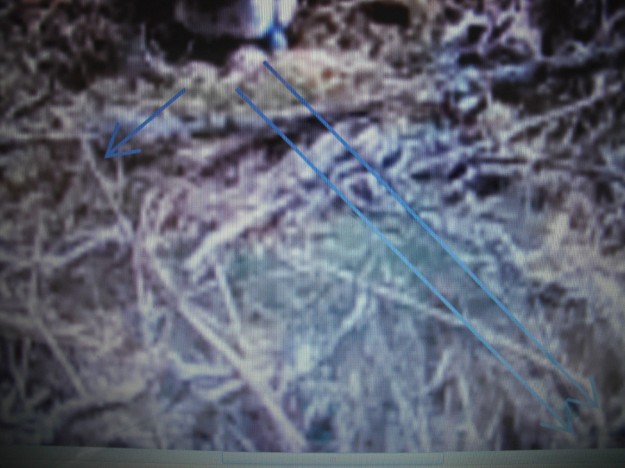 Close up to see the three eggs