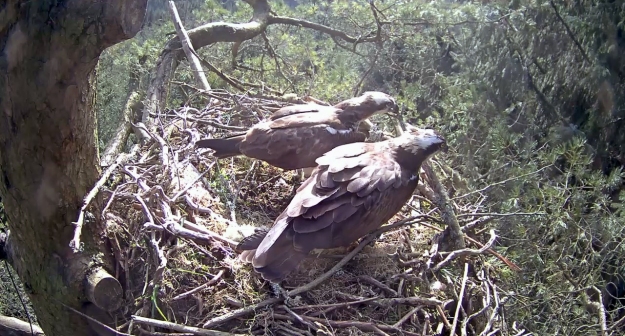 Since arriving last week, our main nest pair have settled in at their familiar territory and begun the serious business of making their nest secure and structurally tight. On Wednesday 10 April, SS brought in a large, lichen-covered stick for the nest. He placed it up at the top end but was clearly not happy with it, and kept trying to move it further down, but didn’t like the lichen coming off and sticking to his beak. He kept shaking his head and dropping the stick.

Mrs O came to the rescue and in a rare act of teamwork, she got hold of the stick’s underside, which didn’t have lichen on, and pulled it. SS got hold of the other end and they worked together to ensure their nest felt secure and sturdy to their satisfaction. 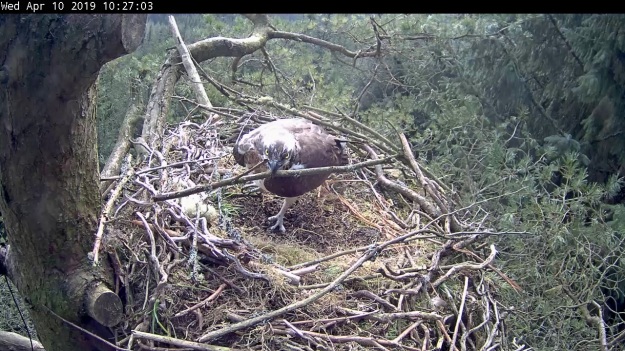 This is progress in their relationship. Mrs O seems contented and relaxed, and there has been less squawking from her than in previous years. This is her third year with SS, so she must feel more secure and confident that their partnership is strong.

The first year that she came, she fought off another ringed female bird and claimed the territory and the right to be on the nest site with SS, who has been at the same site since 2004 with his first partner (who sadly died in 2014). Mrs O and SS spent the first season holding the territory, but didn’t breed as they were too late pairing up for mating to produce viable eggs. 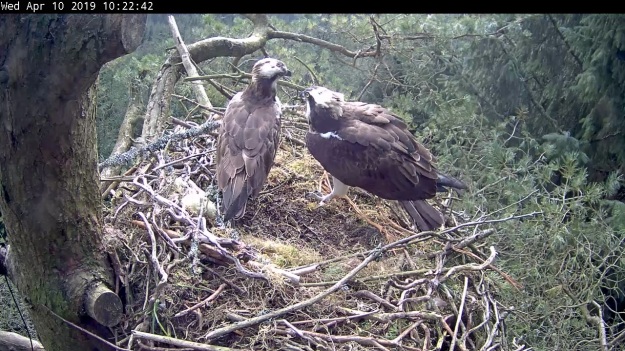 Working together to make the nest secure

Last year when Mrs O arrived, she hadn’t quite made her mind up and flitted between the back up nest and the main nest, until finally settling and choosing SS as her mate. They successfully raised their first family together. This year she arrived back at the nest on the same day as SS, and they are now an established couple. They have been sharing nest building tasks between them, and homemaking and togetherness is evident in their teamwork. Their bond will grow stronger the longer they are together, and this bodes well for raising a family again this year.

Eggs on the way for Easter?

The pair have been mating regularly, and we can expect eggs over the Easter weekend with a bit of luck. This week Mrs O was trying the nest out for sitting purposes after a spot of stick moving, and she squatted down in the centre and sat. No eggs are laid yet but she must be getting ready. 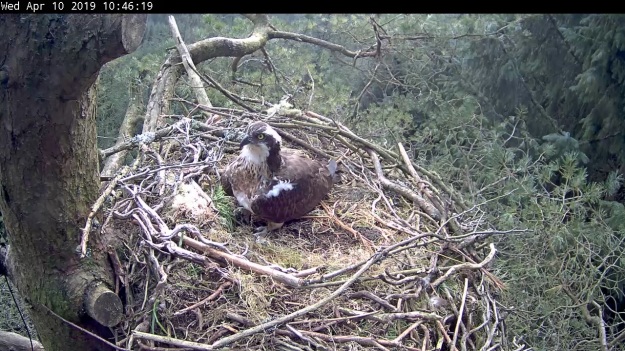 Mrs O gets comfy and ready to lay

SS brought a fish in after a hunting trip on Wednesday and gave it to Mrs O. She went up onto the perch and ate it, and SS looked very tired after his exertion. He sat in the nest relaxing and resting with his eyes closed. We have not witnessed him sleeping at the nest before, but he is a 20 year old bird now and has just arrived back from his long migration. He will need to build up some strength for the summer, to provide for a family of hungry young, and a partner, as well as feeding himself.

Hopes for a brighter 2019 season

There are still no ospreys at the back up nest yet, but another pair at one of the sites have returned safely already, and others will be taking up their territories too. Last year was the worst year since 2007 for the Tweed Valley Osprey Project area birds. Out of a potential 15 nest sites, only 5 were productive with only 10 osprey chicks fledged. Six of the nest sites were occupied by single birds only and they paired up later in the season, but were too late to breed. At least there was pair bonding, which will hopefully develop into breeding success for this year.

Storm Desmond was responsible for blowing out two of the nest sites, with the contents lost. These sites have been re- built up for the 2019 season by the environment team, ready for returning birds.

A nesting platform was constructed on a telegraph pole and erected by Scottish Power at one of the osprey sites last year, where an old nest tree had been storm damaged and had subsequently collapsed. The male bird returned to this site, but the female failed to return. A second female did arrive, but too late in the season. Hopefully they will pair up for 2019. New platforms and nesting locations will be established to encourage more ospreys to breed for the 2019 season, so we are optimistic that this could be a better year.