The juvenile ospreys finally have names!

The names picked relate to the local area. They were suggestions made by one of our longest-standing volunteers, Ella Muir, who has volunteered with Tweed Valley Osprey Project since the start.

Many thanks to Ella and all our volunteers who staff the Wild Watch Room in Glentress. They keep a record of everything that's happening on the nest, make recordings and take snapshots during the live action.

It's thanks to them that we have such a detailed diary of what the birds are doing each day.

The main Tweed Valley osprey nest has been very busy during the past week with the whole family present and waiting for brief visits from PW3 as he drops in to deliver a fish. At other times the nest has been empty with no osprey in sight. Most of the time when the nest is empty they are not far away.

When visiting the Wild Watch Centre at Glentress you can hear them on the live screen, the loud calls of the juveniles from close by as their cries, demanding food, carry far across the forest.

Sometimes the juveniles are present for hours at a time constantly squawking and begging for food. They are quite restless hopping about in the nearby branches and landing on the nest platform before moving across to perch on branches again.

Mrs O has not left the family yet. She was spotted home alone on 6 August mantling her wings over a fish, giving the impression that she wasn’t going to share but she soon relented and let Kirk (707) have some, and she fed him when he joined her. An hour later, Kirk was still at home when PW3 arrived with more fish, a small greenish fish with red fins which could be a rudd from a local pond. 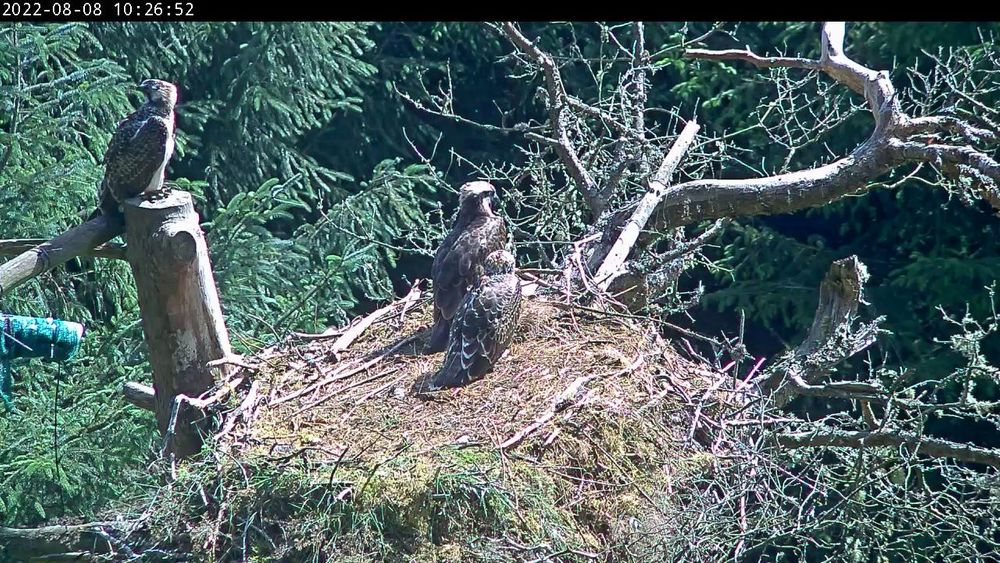 Mrs O with all three juveniles

On 7 August at 1.30pm Mrs O and one of the juveniles were in the nest calling loudly when PW3 dropped in with a fish. They were soon joined by the other two juveniles and so PW3 left the fish and flew away. Mrs O mantled over the fish as though not sharing again but just like the day before she then shared, with big strips of fish torn off and given to the nearest juvenile. It was a busy nest and difficult to make out who was who.

It has also been a very busy couple of days for the young birds. When checking their tracking data we can see that since 8 August, all three young ospreys have been more adventurous with their flights, spreading out further into the valley. They are mostly heading over the tops of the hills and having the River Tweed within their sight. They return to the nest and make direct flights out from there to check out where the water courses are and then return.

All flights are taken solo and we can see that Tweed (706) flew over the hillside above the River Tweed opposite Caerleebank, near to Innerleithen, on 8 August at 7am and again at 10.30am, flying into the forest and re-emerging close to Cardrona, a couple of miles from Peebles. 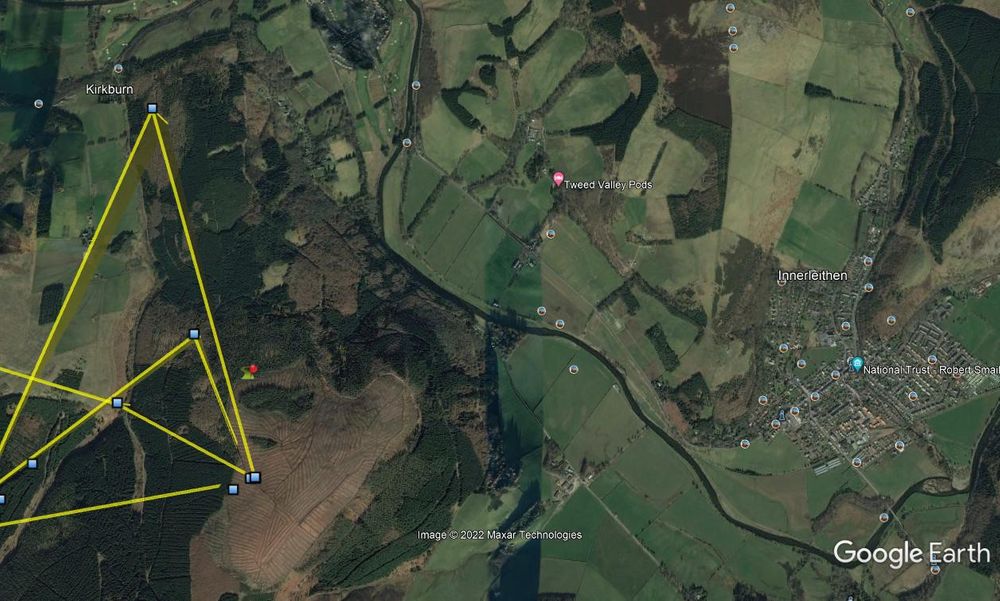 Tweed's (706) flights on the hillside overlooking the River Tweed near to Innerleithen. Dots are tracker points and yellow lines are flight paths.

Kirk (707), flew across to Traquair on 7 August, in a three-point triangle-shaped flight along the hillside with the Tweed below at 12.20pm.

On 8 August he took a flight up and over the hills towards Cademuir Hill and then on 9 August his greatest adventure was a trip in an anticlockwise loop towards Gladhouse reservoir, then west to Portmore Loch and then back along to the Tweed Valley.

No stops appear to be made at any water body but he seems maybe to be familiarising himself with the locality of water courses in the area. 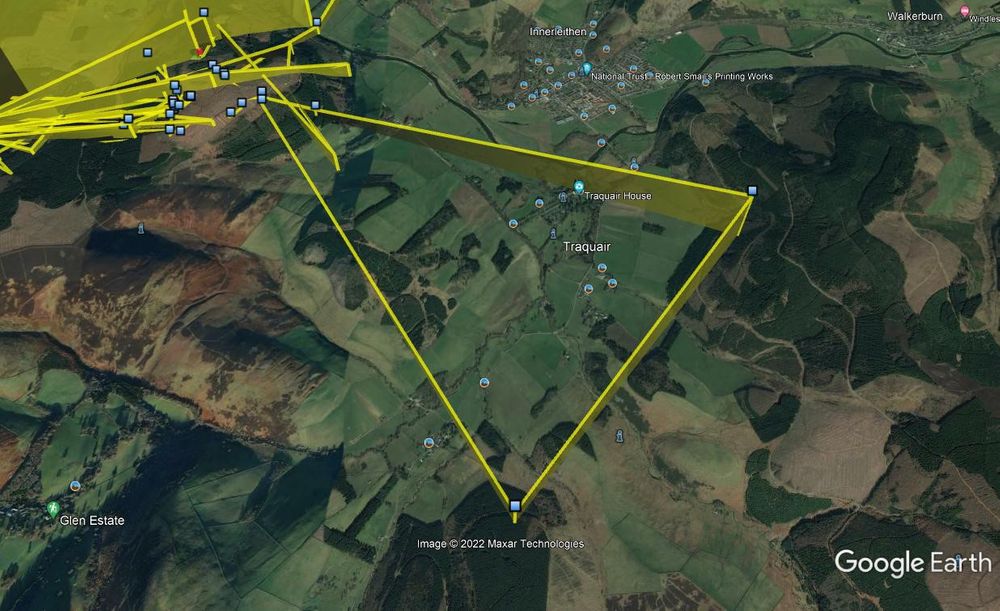 Glen (708) was also making trips out on 8 August, with his first jaunt over the Glen Estate which was most fitting given that we had chosen that for his name. He flew over the hillside above the Kill Burn and turned back only to later make another flight from his retreat in the forest to the hillside above the River Tweed above Old Howford Bothy. 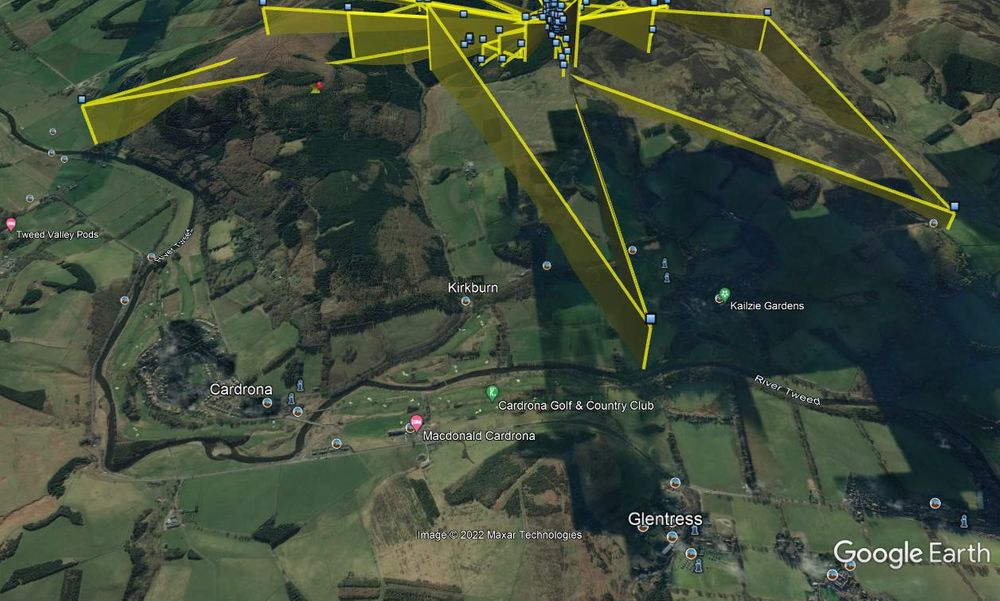 Glen (708) makes three stops over the River Tweed. Each flight goes from the forest to the river and back again. See the three long yellow pointed flight paths with the shading indicating the height and vertical line at the point stop giving a 3D impression of the journey.

On 9 August, Glen flew adjacent to the Tweed in the hills near to the Eshiels Community Woodland, south of the Tweed. From each of their flights they were high above the hills and would have a panoramic view of the valley river systems below. They are definitely gaining in confidence and are doing very well so far.