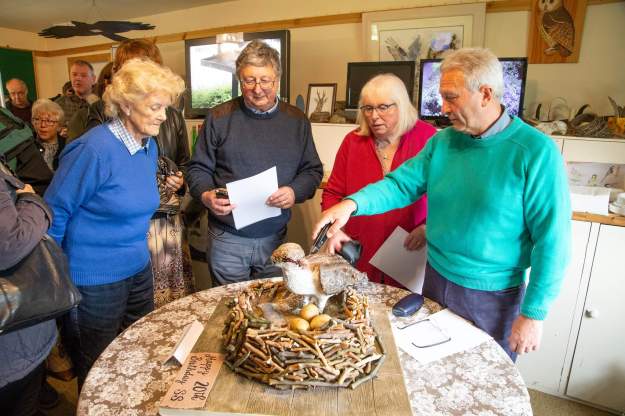 Saturday 8 June was a truly nostalgic day for the Tweed Valley Osprey project, as we celebrated the 20th birthday of our male osprey, White Leg SS. It was a lovely time to reminisce and reflect on the achievements of the osprey project over the past two decades.

The day was filled with much laughter and warmth, as stories were told. Tony Lightley shared some of his experiences with the birds, including the time he got a spattering of osprey splat during a ringing session one year.

Emma from Emma’s cakes of Kelso made an amazing cake, in the form of a sculpture of SS sitting on the nest with a half-eaten fish and three eggs. It was a work of art. Tony Lightley and Lady Angela Buchan-Hepburn from Kailzie Gardens cut the cake for all to share. The party carried on with the warm hearted banter of like-minded volunteers from across the duration of the project. 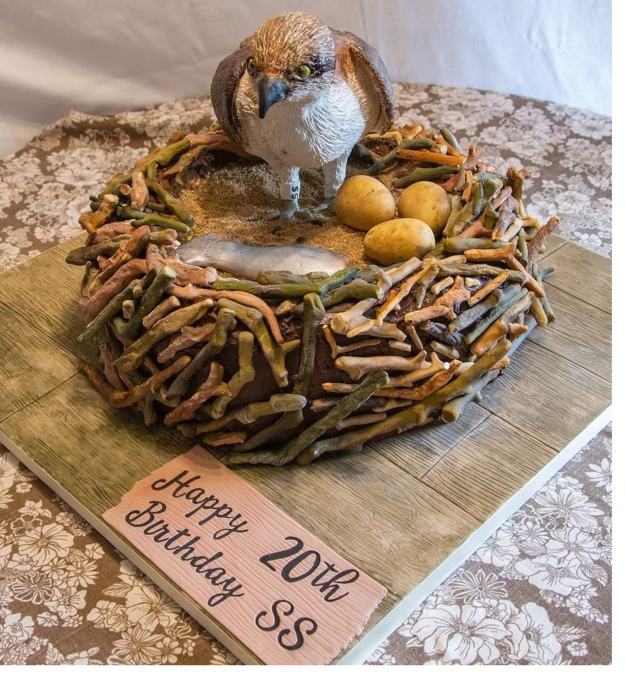 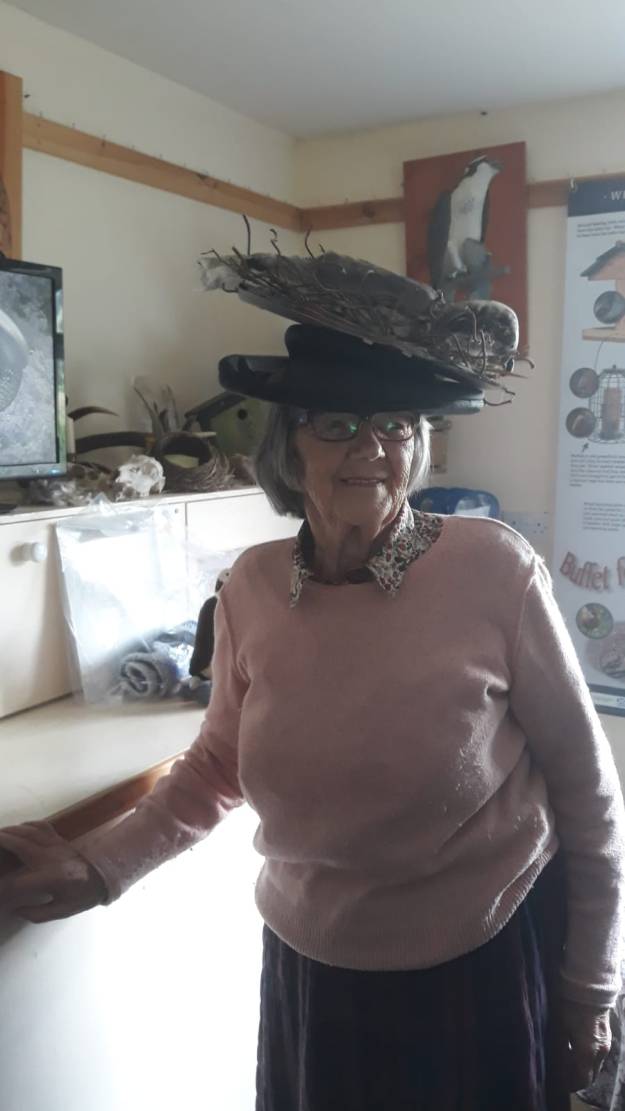 Val Barnes with the osprey hat. 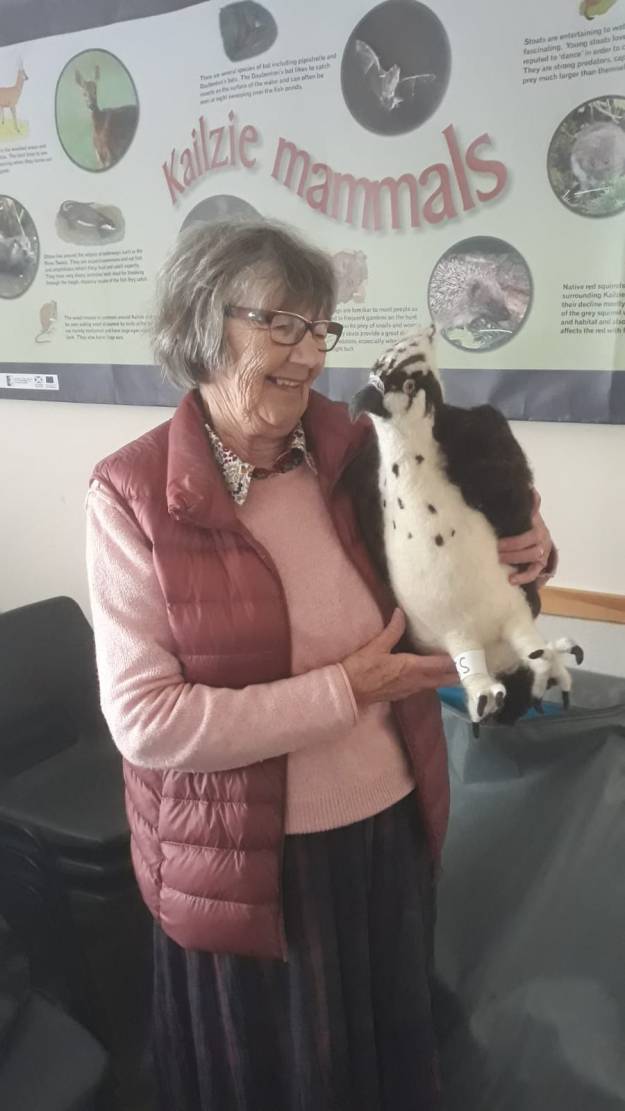 Val Barnes with the felted osprey of SS. 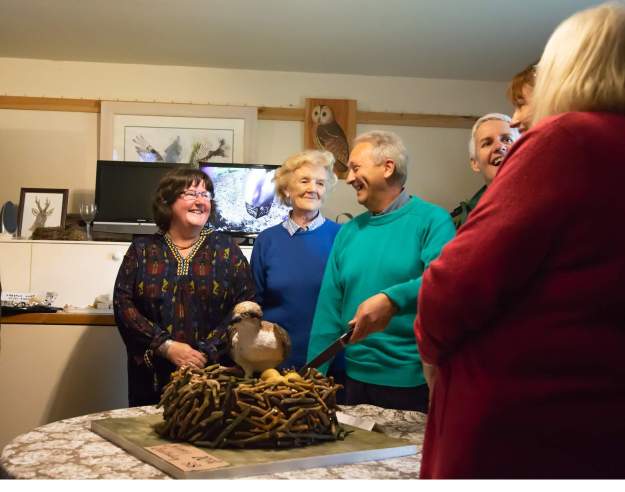 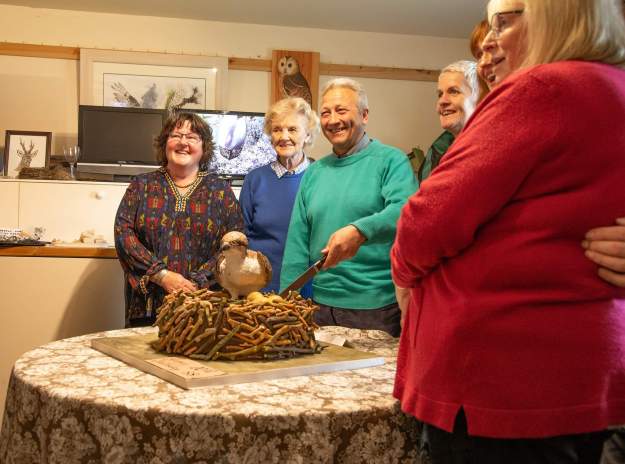 We joined together with Tweeddale Folk Group to sing the Tweed Valley osprey song called The Return, written by Rhona Anderson and Diane Bennett, telling the tale of ospreys returning to the Tweed Valley: 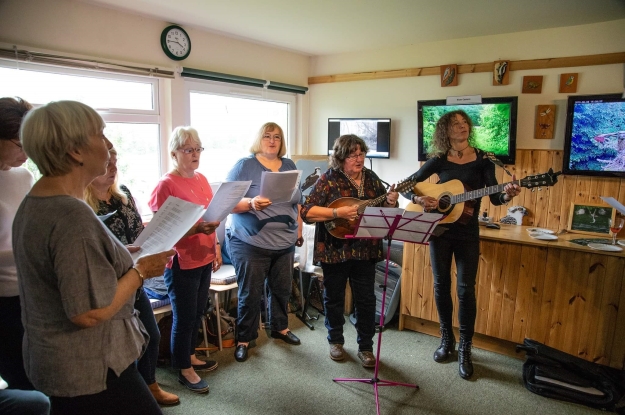 Spring delight, the strengthening sun
A yearning call, within to return
Travelling on to the place, that he calls home

3000 miles, to a land with pride
A journey made, over seas so wide
Striving for the place, that he calls home

As he flies over, the Tweed Valley
With a beckoning cry, his mate he did see
Safe once more in the place, that he calls home

A late summer brood, in the hottest sun
How can they survive? It must be done
Life struggles on in the place that he calls home

They parent their best, the young prevail
Leaving the nest on a coastal trail
Onwards from the place, that they call home

The parents are gone, their job is done
Knowing not, the fate of their young
Flying from the place, that they call home

Another year over, new challenges to arise
Back to southerly, winter skies
Onwards from the place, that they call home

A dark winter forest, in a time of rest
Everything quiet, on an empty nest
Silently awaiting the return, to their home

Seasons turning, a deep unrest
Stirs restless spirits, within their breast
Longing for the place, that they call home

We await, their arrival once more
Celebrate their return to our shores
Ospreys are welcomed back to their home

The artistic talents of many osprey volunteers were on display too, with a fantastic painting of White Leg SS by Patrick Corley Jackson and a felted sculpture of SS by Su Bennett. Lovely poems and pictures, and written research done by volunteers, were all recorded and displayed in the centre. It was a really great day and so nice to see so many people there to share the success of the project and chat about the days gone by. 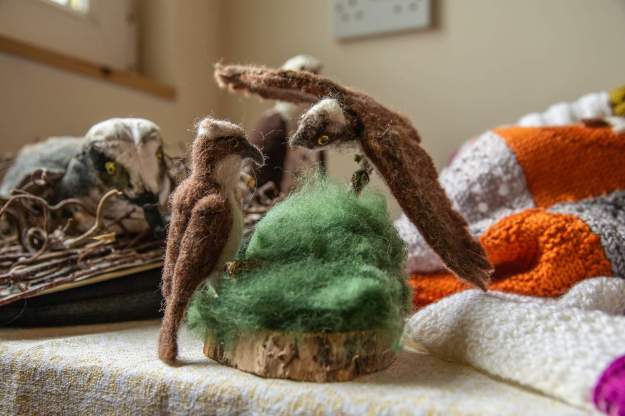 Su Bennett and the Kailzie Crafters.

Meanwhile, back at the nest…

On the screen in the centre while the celebrations took place, it was business as usual on the nest. Oblivious to the partying going on in his name, SS and his family provided the backdrop to the scene in the centre. They were busy with their offspring and their daily duties, feeding and looking after them. 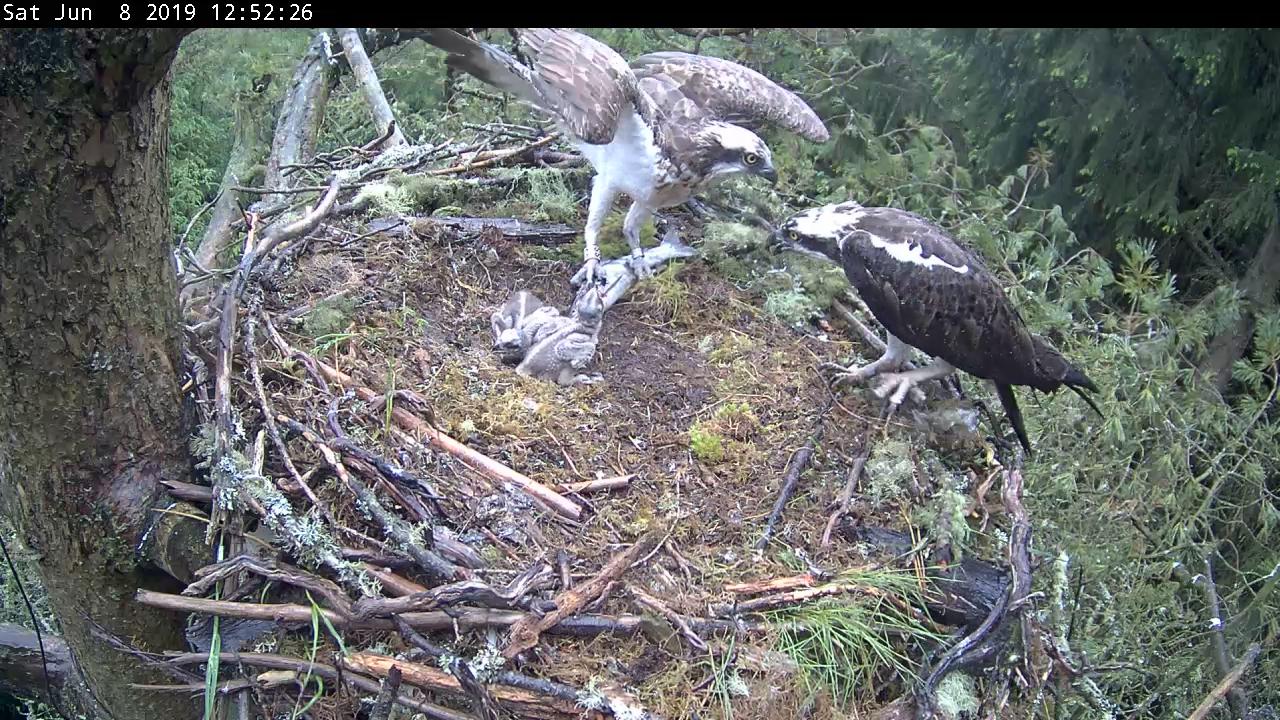 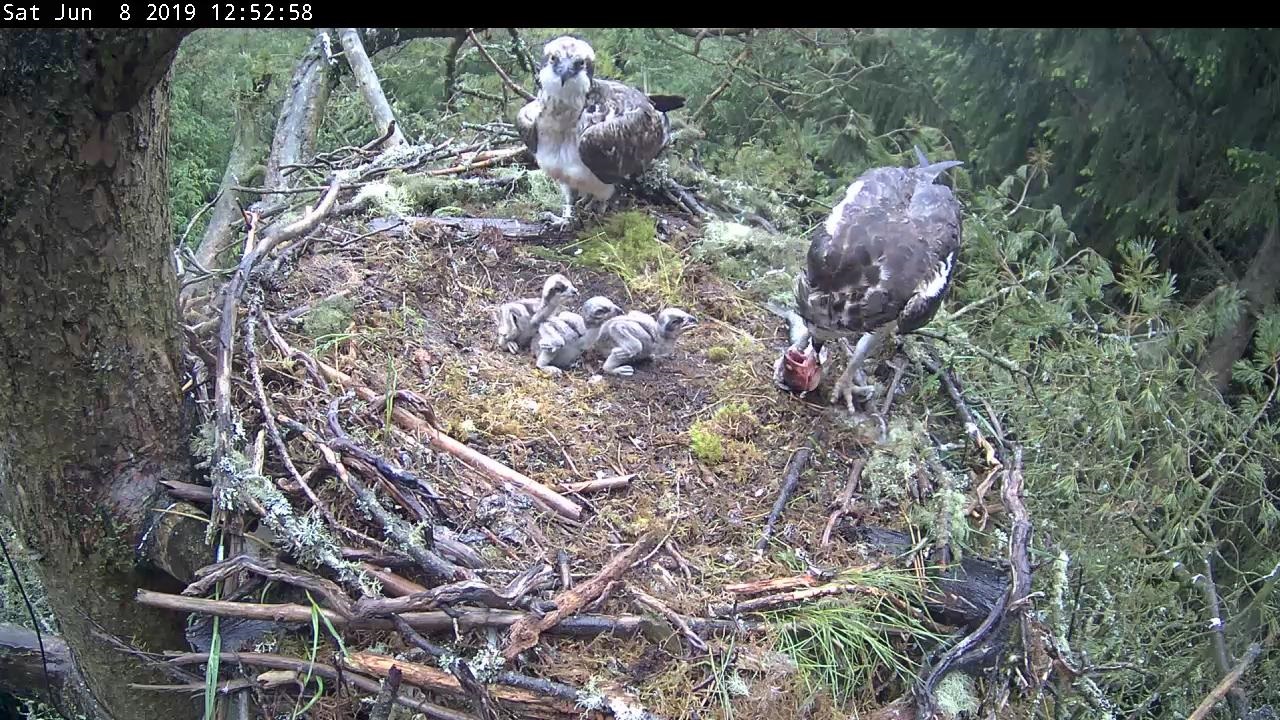 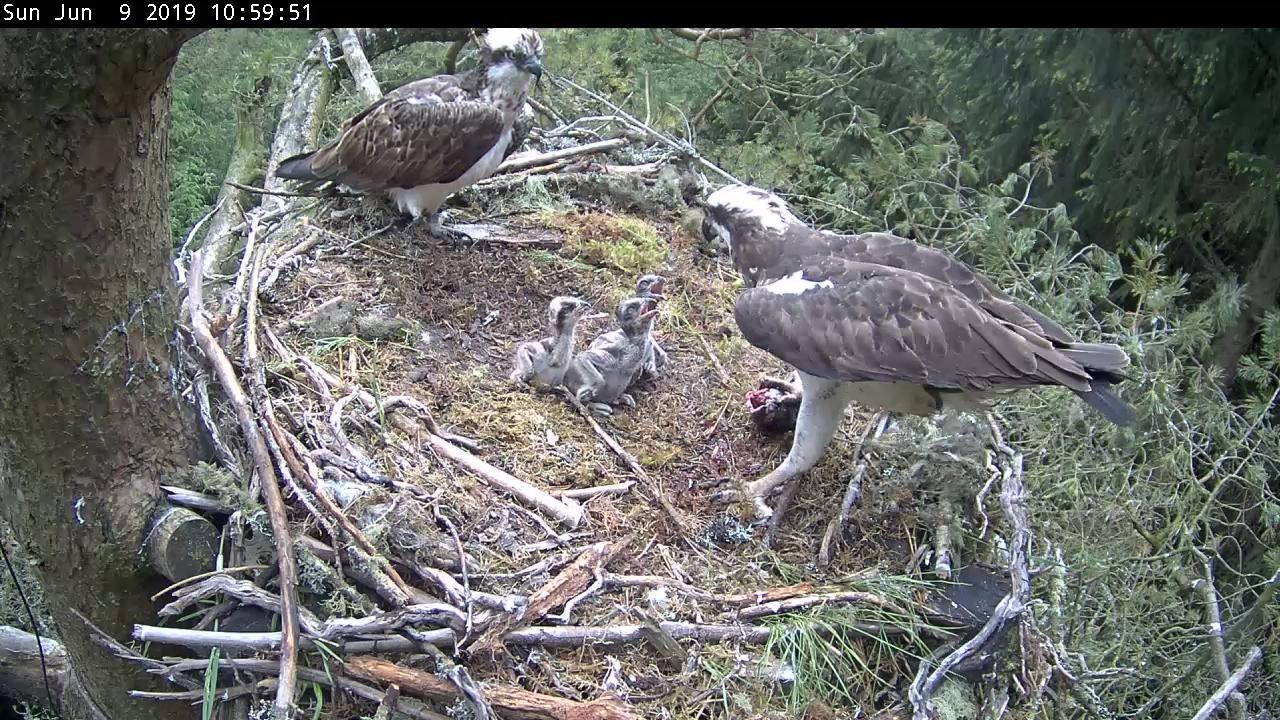 The eldest chick was ten days old and all three were in the nest being fed by their mum when SS came to take the remaining fish away to feed himself. The chicks were visibly full. They were toppling around the nest like skittles, bulging crops at the top of their throats and fat rounded full bellies at the other end.

The next thing one of the chicks fell over and couldn’t get back up. It lay upside down kicking its legs out like a stranded turtle, just as the rain began in earnest again. Mrs O sprang into action, not to right the poor thing but to sit on top, in an attempt to shield it from the rain.

One of the other chicks cuddled in almost on top of the flattened one and then the third chick dived under mum to further complicate the muddle. Mrs O shuffled and wriggled about, which was not surprising, as the little one beneath her had kicked its legs up into her side. She held firm and they all stayed below in a warm huddle, with their mum straddled across them to keep them warm and dry.

We were seriously worried that the upside down chick would come to harm, particularly as Mrs O seems so clumsy around her delicate, newly-hatched young. She had curled her talons out of harm’s way, but she wasn’t exactly gentle in manoeuvring them underneath her. Perhaps she was in a panic to keep the almost naked chicks from getting wet, as they only have a smattering of down covering their little bodies and are not waterproof yet. 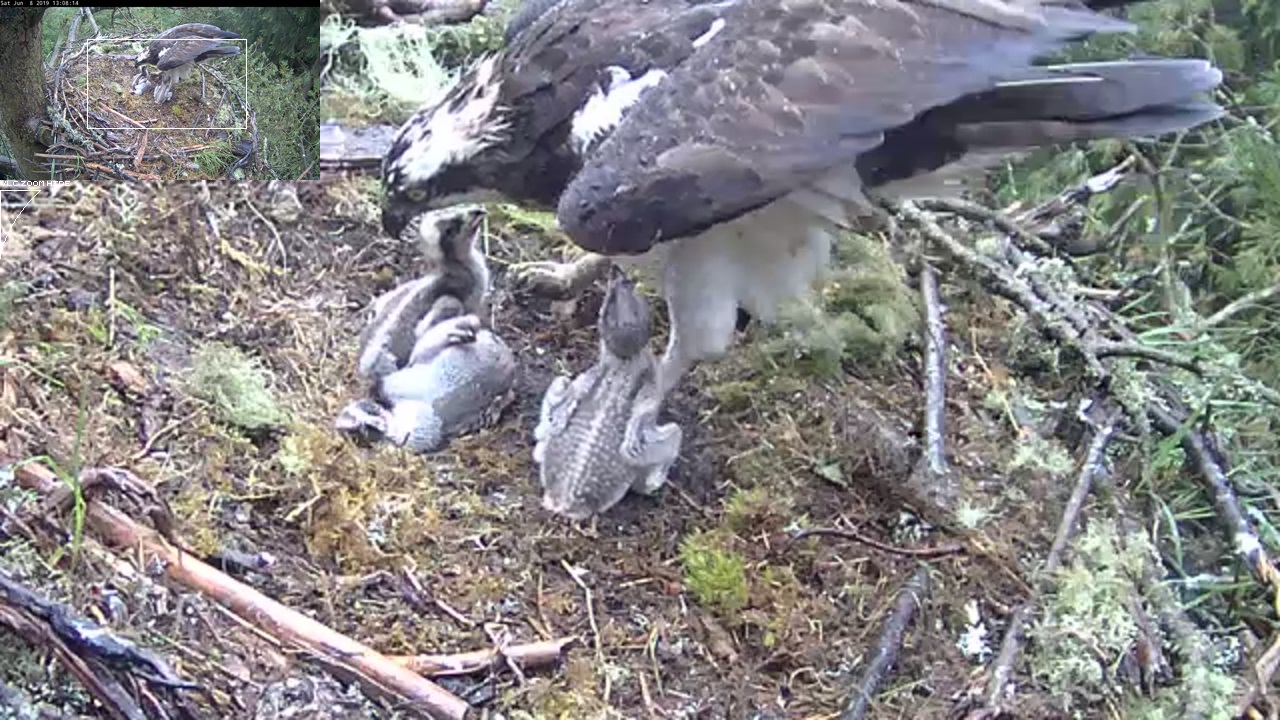 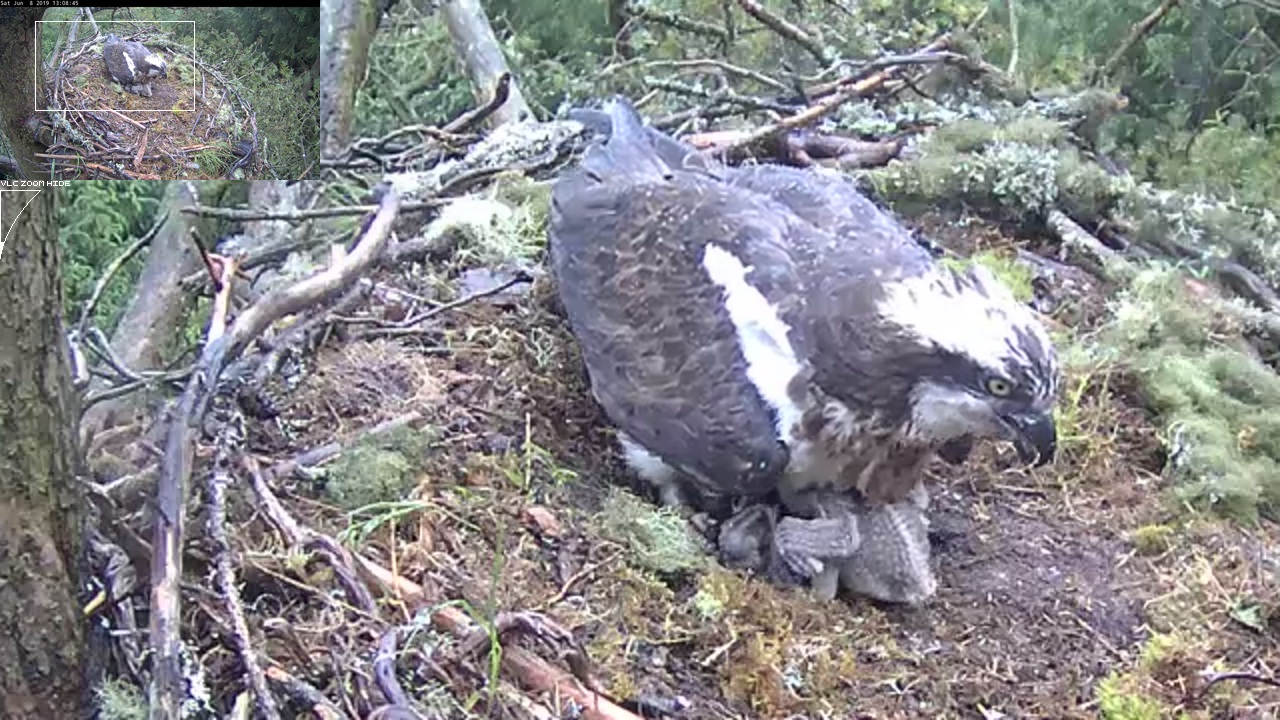 Mrs O pulls them all beneath her to shield from the rain. 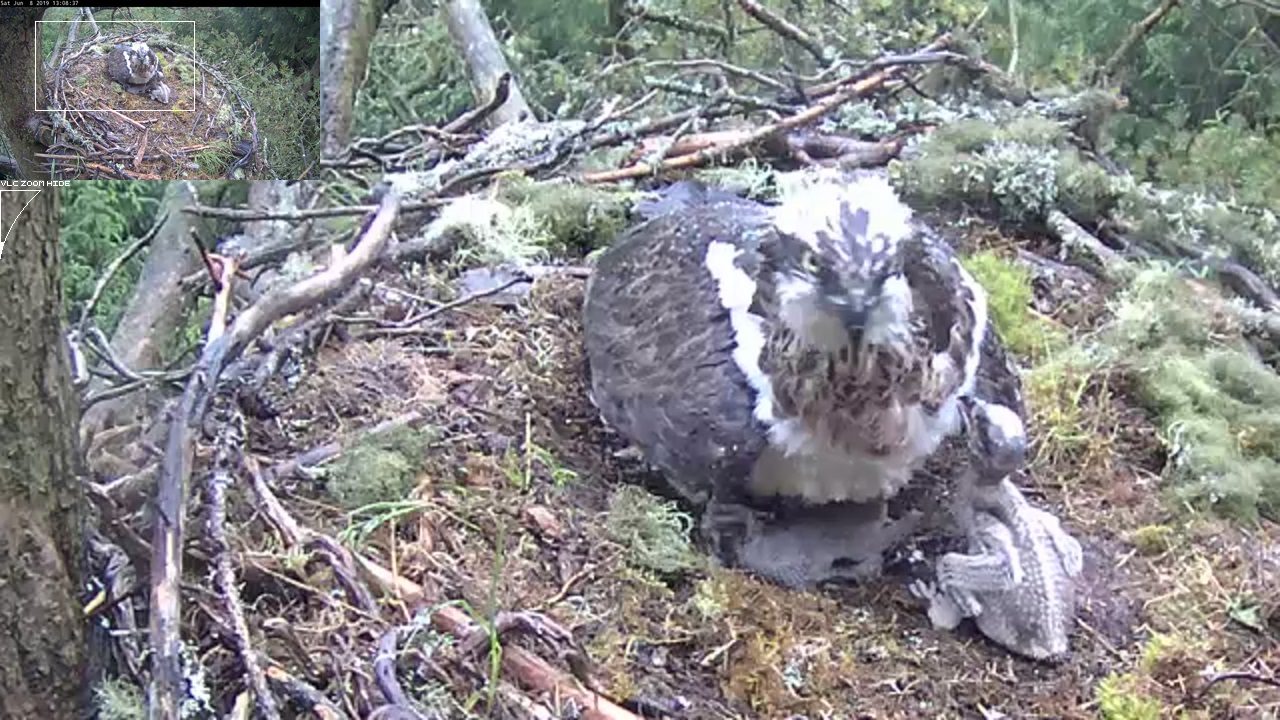 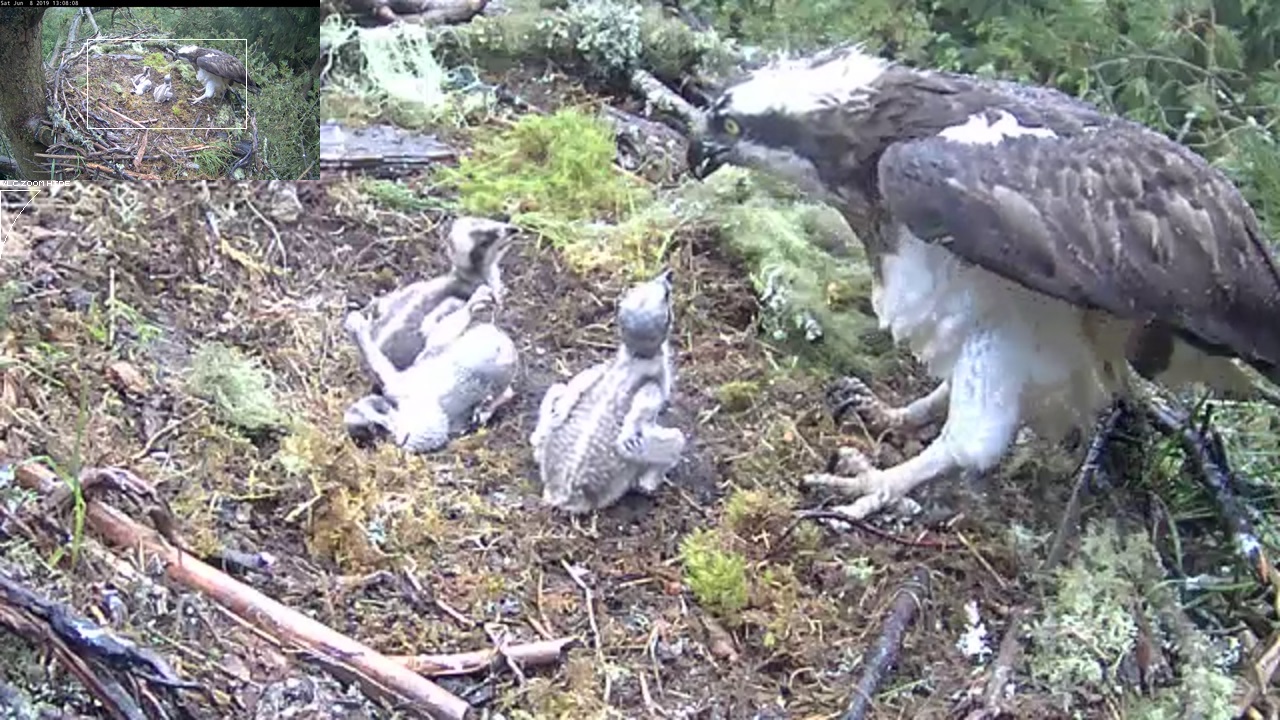 Oops over you go! Toppled little one.

The next day revealed that all chicks were alive and well, and in upright positions, as they formed a queue to be fed. As they lined up, we noticed there is a noticeable size difference from the youngest chick to the eldest chick at this stage.

Although the three were hatched on consecutive days, one of the chicks is a fraction smaller than the other two - and weaker. Time will tell if it catches up with its brothers or sisters once it begins to grow.

They are very cute to watch, with their dumpy bodies which can barely be supported on their skinny legs. They use their wing buds as little arms to help as they clamber about. They all have the trademark osprey eye-stripe already, with the smallest chick having the most prominent stripe. 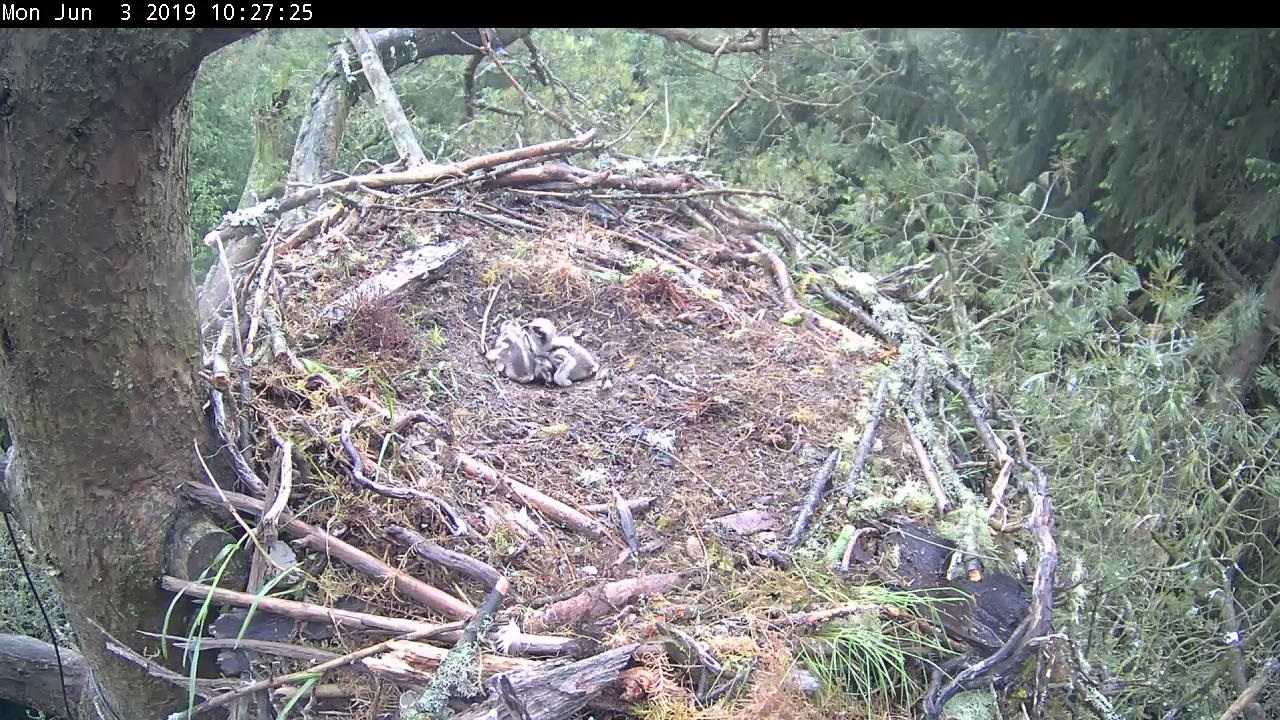 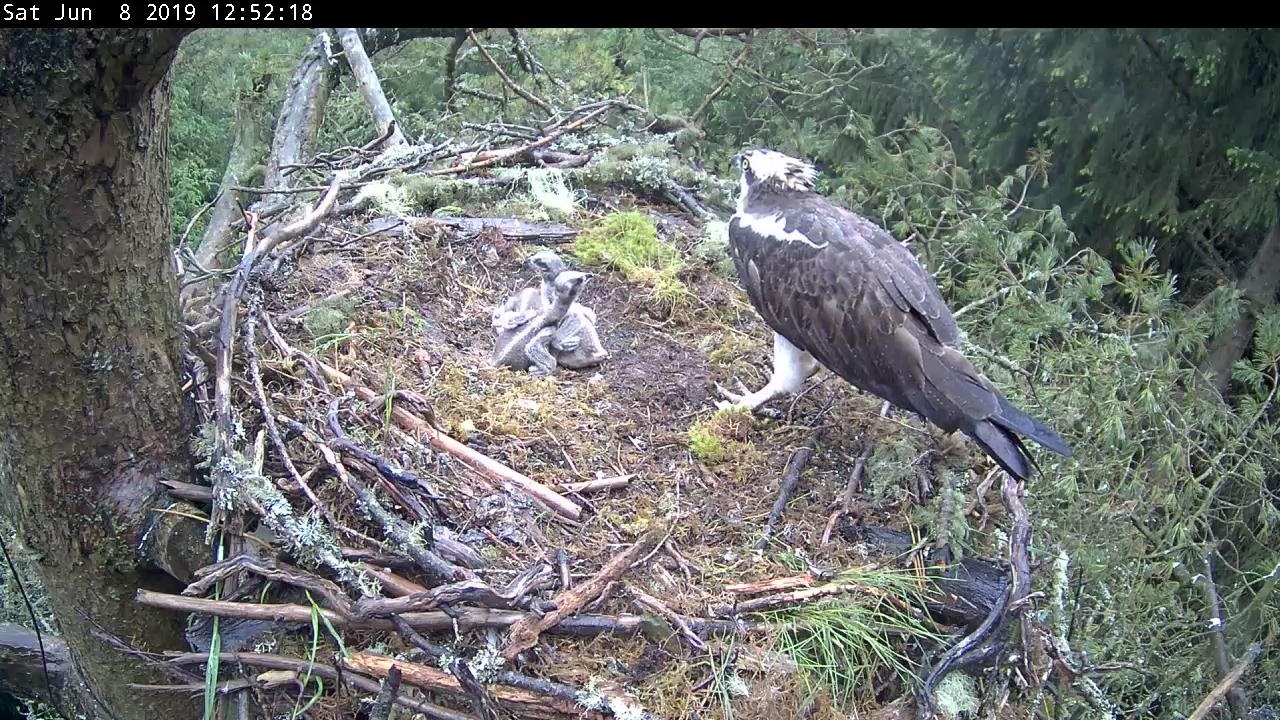 Change happens rapidly as they begin to grow and next week we can expect to see tiny feathers begin to cover their bodies. This will give them some colour to depart from the drab grey uniforms of down at the moment.

Snuggling under mum to keep warm and dry is a far nicer experience for these chicks than last year’s young, who were suffering in the scorching heat of the hot summer sun at this point. So, despite the rain, this cooler summer that we are having is not all bad if you’re an osprey!

Watch the latest highlights from the nest on YouTube: