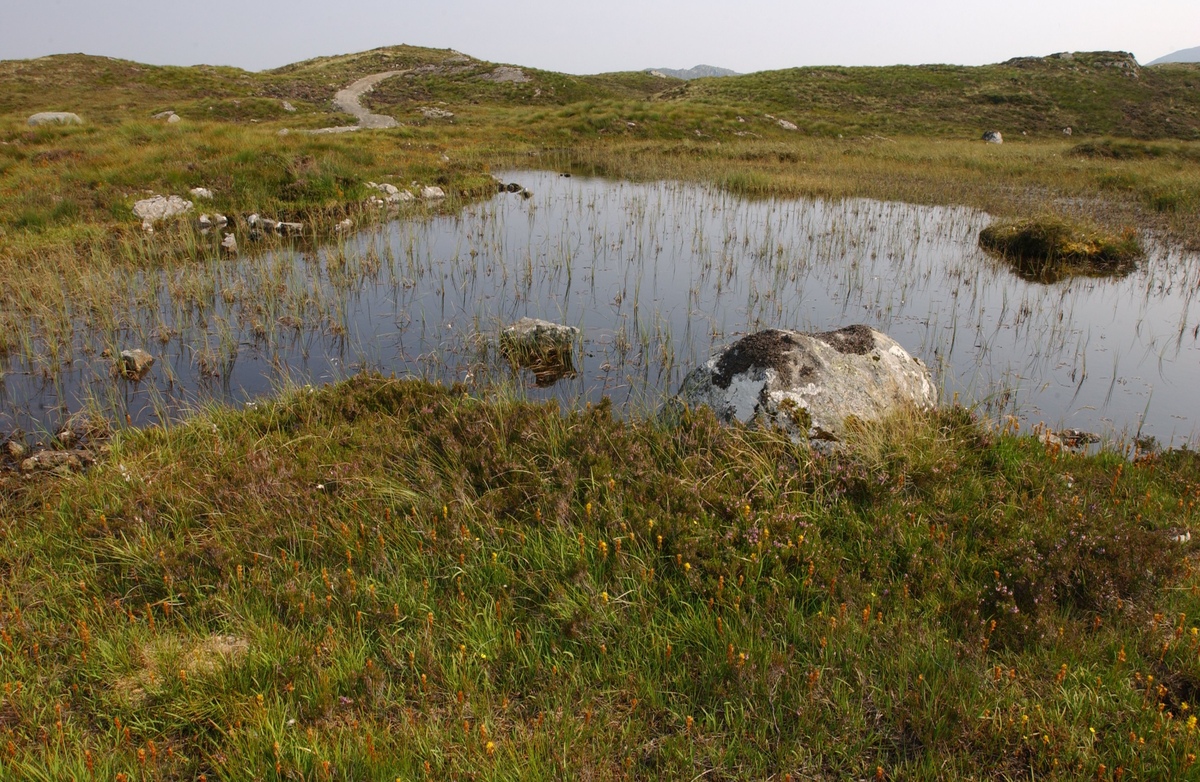 According to current estimates, peatland covers about 3% of the planet. Peat is made when many years' growth of plants partially decay, to build up a biodiversity-rich habitat.

Peatlands vary in age, size and distribution across Scotland. The blanket bogs in the Scottish uplands started to form just over two thousand years ago, and their peat depth varies from between half a metre to 6 metres. The lowland raised bogs found around Stirling, Dumfries and the Central Belt, which have depths of over 10 metres, are thought to date back as far as six or seven thousand years.

The current media and political interest in peatland is due to its ability to capture and store carbon which, depending on what condition the
peatland is in, can either contribute to climate change or act to reduce it. However, peat is traditionally known as an energy source, which has been burned for hundreds of years in the hearths of Scottish homes, and is still used worldwide as a basic, easy-to-obtain resource.

In recent years the focus has shifted towards its ability to capture carbon emissions; regarded as an important development in the field of natural solutions to the problem of climate change. Some of Scotland’s peatlands need careful management and restoration to change them into a reliable store of carbon, and hopefully start to capture and sequester some of it for the good of our environment.

This year, the Scottish Government has provided funding to Forestry and Land Scotland for the purpose of restoring and managing peatlands, and planning for more of this pioneering work by identifying the best areas to restore. Over £3 million will be used for these ends, with money coming from the Scottish National Heritage Peatland Action Fund, and directly from the Scottish Government, following their declaration of a Climate Emergency in April of this year.

This funding will allow FLS to continue and expand our programme of restoration, and to invest in extra roads and bridges to access peatlands in the south of Scotland in the future. FLS will also be supplementing our staff on the project, and recruiting for an additional Delivery Forester to assist on this vital project. The funding will allow us to scope and survey even more sites, with a view to expanding the programme should further funding become available.

Planning for a low-carbon future

Work has already begun on restoration of some key sites, covering some 2,500 hectares of afforested land, and 3,000 hectares of existing but threatened open peatland. This year’s work will see a further 785 ha restored across 14 sites across Scotland.

Ian McKee, Open Habitat Ecologist with FLS, said: “This funding is a great testament to the quality and range of restoration projects that we have undertaken over the past five years as we work towards restoring over 2,500 hectares of former forestry plantation back to Blanket Bog and Lowland Raised Bog. This hugely important work is helping secure our carbon stores, and change the peatlands from sources of carbon to carbon sinks. Every site we restore adds to the scale of the contribution we make to our environment, to biodiversity, water quality, to our future, and to the people of Scotland.”

Every site we restore adds to the scale of the contribution we make to our environment, and our future."
- Ian McKee, Open Habitat Ecologist, FLS

Peatland preservation is an integral part of Scotland’s contribution to tackling the global climate emergency, and will contribute significantly to the Scottish Government pledge to make Scotland a net-zero emissions country by 2045. Using a range of techniques developed initially by FLS, Scottish Power Renewables and Forest Research, FLS’s restoration work involves removing trees and ‘re-wetting’ sites, as well as smoothing out the ridge and furrow patterning established when sites were originally planted with trees.

"The objective is to restore an important peatland habitat, secure the carbon store of the peatland, and hopefully capture a modest amount of carbon in the future," says McKee. "This is done by counteracting the modifications carried out previously during the afforestation of the peatlands in the past, and creating the wet conditions that will allow the re-colonisation of a healthy peatland habitat capable of forming peat."

Survey work, including water quality monitoring, is helping to assess the progress of restored sites, minimising any potential negative impacts, and identifying other sites that could be restored to their original condition. The development of an FLS Peatland Restoration Strategy has begun, with a focus on long-term planning. There are hopes that FLS could identify up to 35,000 hectares of potential forest-to-bog peatland restoration, and improve the condition of a similar amount of existing blanket bog elsewhere.