Our peatlands can play an important role in tackling today’s global climate emergency.

Forestry and Land Scotland (FLS) is doing its bit to reduce the impacts of climate change on a number of fronts – one of these is through restoring our precious peatland bogs. 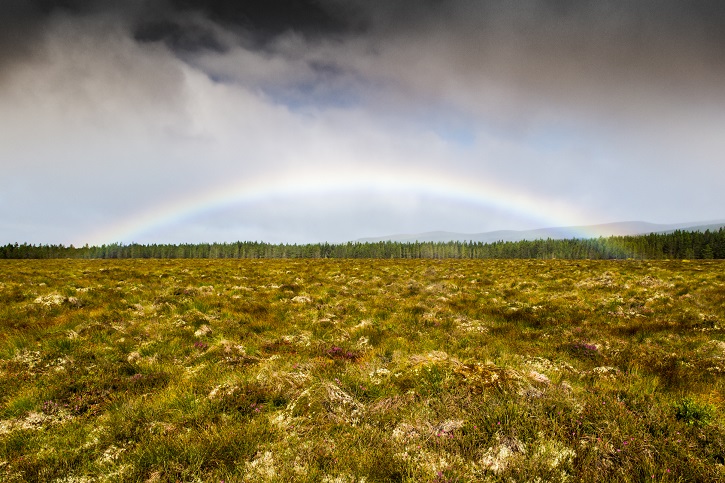 Damaged peatlands can emit up to 20 tonnes of CO2 each year but once restored, they can actually capture a modest 0.5 – 1 tonnes of carbon annually.

Key to achieving this is restoring the peatlands to their normal hydrological condition, which involves removing the trees and blocking drains with peat dams. FLS also uses an excavator digger to flip and bury the tree stumps and smooth out the ploughed ridges and furrows.

All these measures and more, help raise the water table to the levels found on near natural examples of this biodiverse habitat.

To date, the peatland restoration programme, which covers projects on Scotland’s national forests and land from Caithness to Galloway and Lochaber to Fife, has been running for five years and has restored around 2,300 hectares of afforested peat bog.

FLS in conjunction with its contractors, has developed a harvesting system which uses a specially adapted machine to efficiently cut and remove trees from extremely wet and soft peatlands. Use of this machine allows more timber to be recovered, leaving the site easier to restore.

Not only do peatlands act as huge carbon stores, but they are actually of global significance for biodiversity.  Improving their condition and extent will help them to adapt to future climate change.

FLS is supporting the Scottish Government’s response to the global climate emergency through these peatland restoration projects – a great way to reduce harmful greenhouse gas emissions.