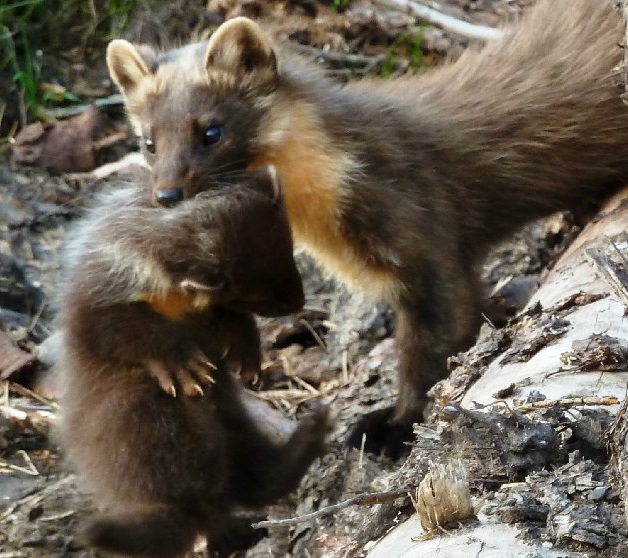 Foresters in Galloway identified a unique opportunity to record a natal den site of Pine Martens as part of a project to increase Pine Marten survival.

“Pine Martens are very much an arboreal species, superbly adapted to climbing trees. Breeding female Pine Martens show a preference for arboreal cavities when selecting natal dens, and although commercial forestry plantations undoubtedly help the Pine Marten in Scotland, the forest structure containing relatively young trees does not provide many suitable tree cavities, so in an effort to increase cavities and improve breeding success the forest district provides around 100 artificial den boxes across Galloway Forest Park

“In March, Foresters were planning ground preparation operations ahead of restocking a site, prematurely felled due to Phytophthora ramorum, in a forest north of Newton Stewart. Ecological site assessment and survey for priority and protected species conducted as part of the site planning noted that the operation would fall within the protective buffer zone implemented around one of the artificial den boxes if it was occupied. Before any operations could begin we began monitoring the box for signs of activity during the pine marten natal denning period.

Pine Martens often leave obvious clues to their occupancy of these boxes by scatting on the lids, often in prodigious proportions, creating huge piles visible from a distance."

“However, when monitoring started in March and no scats where seen, camera traps under SNH licence were put in place to monitor the box. One last check before operations started revealed that a Pine Marten had turned up. We then needed to judge if this was a natal female. We decided to continue monitoring until early May when we could safely inspect the box for kits.

“Inspection showed three kits living in the den, two girls and a boy, five weeks old and just opening their eyes for the very first time. This is only the second time we have recorded a litter of three kits in a Galloway den box, a find that indicated birth at the end of the first week of April, just days after the female arrived at the den box. 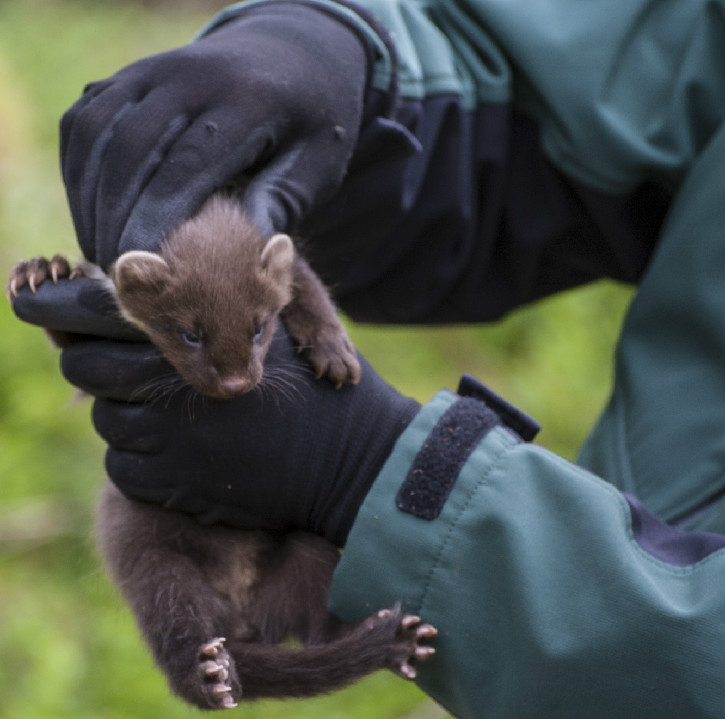 “Monitoring showed an increase in the female's activity level in line with the kits beginning to eat solid food and the cessation of lactation - she was often recorded bringing in small mammals and fledgling bird prey.

“Kits usually emerge from the den at six - seven weeks old, and on May 22 the first foray of the kits into the outside world was recorded with a small nose poking out of the entrance, promptly followed by it falling out of the box 4m to the forest floor. The next few days were like a slapstick comedy show with a series of falling kits followed by the mother dragging them back up the tree and unceremoniously shoving them back into the entrance, at times the falls where just five minutes apart.

“Shortly after dawn on 27 May, the mother had had enough of the fun and games and dragged each of the three kits out of the box carrying them down the tree in turn. Again this is fairly normal behaviour, where the mother moves the kits to what we call a nursery den, usually in a tree with loads of branches for the kits to learn to climb, building their strength and coordination until they are able to follow their mother out foraging and hunting around her territory.

"However, they have not moved far, with the mother occasionally returning to the box for a quick siesta or feed in the middle of the day away from her raucous kits. It was also very noticeable that despite her efforts to keep the area clean of scats, once the kits started moving about, the area below the tree became a mess of scats and dropped prey remains.”