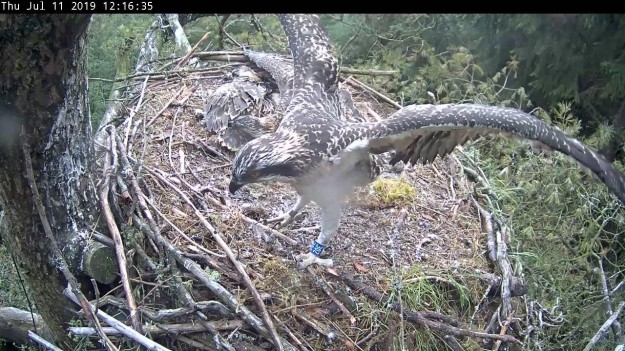 The main nest osprey chicks are eight weeks old this week! This week, the fortunes of the young male osprey have turned about; he has been the underdog of the brood for much of his growing life. He was regularly last in the queue to be fed by Mrs O; so much so that he learned to hang back instead of lining up with his more powerful sisters.

The week started off with much the same pattern, but a change slowly began to unfold. The first and most notable behaviour change was how 302, the young male, became the most advanced at the art of wing-flapping. He became an ardent wing exerciser compared to the more laid-back sisters and, sometimes while they were being fed, he would be flapping and doing small bunny hops to lift off fractionally and then drop back down again. 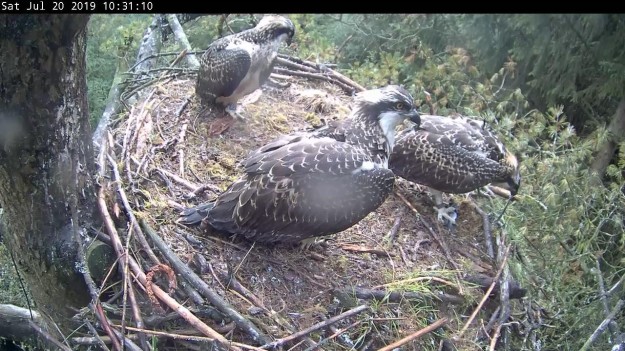 301 feeding herself on the right

On Saturday 20, the female chick 301 began feeding herself in the nest while the other two preened their feathers. This is a new development for the family as they hurtle towards independence, learning the crucial talent of handling a prey item, manoeuvring it with talons and stripping chunks off with the beak to eat. These are survival skills needed for adult life, when she begins to catch her own fish. 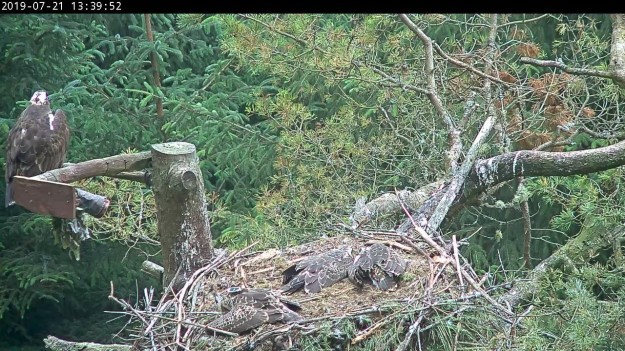 On Sunday morning all three chicks were lying flat in the nest, playing dead, while a very agitated and distressed Mrs O was up on the post above them, sky-watching and calling in alarm. She was dropping her wings and flicking them in a defensive pose and giving her piercing alarm call. Something overhead was intruding upon their home and she was not happy.

Luckily for them SS must have seen what was going on as he approached with a large fish in his talons, and landed on the nest. The young remained flat and Mrs O continued her distress call while crouched, ready to defend her young.

SS abruptly launched himself into the air again to deal with whatever the cause of alarm was. Having just caught a fish can have its drawbacks when it comes to defence. It’s not so easy to just let go and put it down. The fish was hooked onto his talons and spicules, so any skirmish would have involved a large wet fish too.

“Begone, you cad lest I strike you with wet fish!” 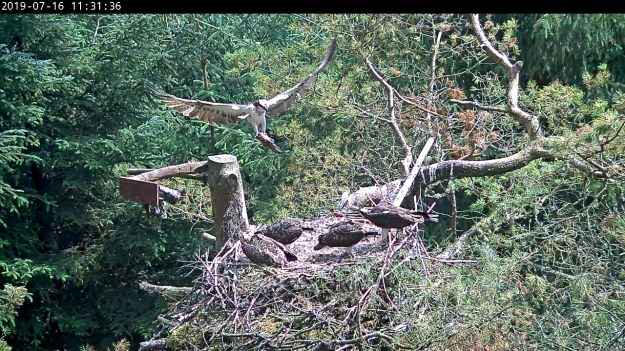 SS bringing in the fish

SS returned quickly, but the threat had still not passed and Mrs O remained on guard. Eventually, she dropped down into the nest to be with the young as SS took off into the air, fish still in his talons.

Assertive 302, the underdog no more 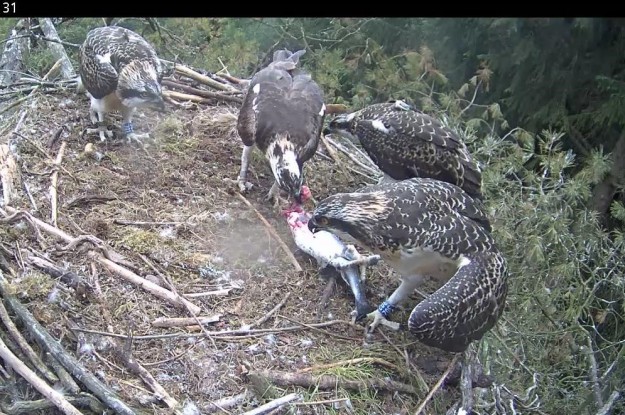 Once all the alarm was over, SS returned with the fish. Mrs O took it from him and was readying herself to begin the feeding regime for her young, when 302 decided to show his newfound assertiveness. He pushed himself forward, hooked a talon into the rear of the fish and proceeded to pull it away from his mum.

A brief tug of war ensued, until she backed off and he claimed his prize, mantling over it and defending his catch from the others. It took him a while to get a good handle on what to do, holding it in his talons and tearing small chunks off to eat. Mrs O left him to get on with it and retreated to the perch.

301 decided to have a go at taking it from her brother but received a good peck to warn her off. Persistence on her part paid off though and once he was full, she managed to take it from him. 303, the largest of the young, was the last to feed on this occasion, and it was mum that fed her once SS returned with a second, headless fish later on. 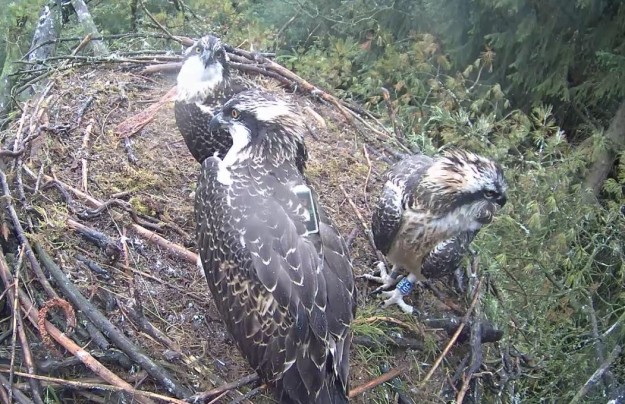 Sunday concluded with three happy, well-fed osprey young, all advancing towards their goal of independence rapidly. All three will likely be flying by next week. 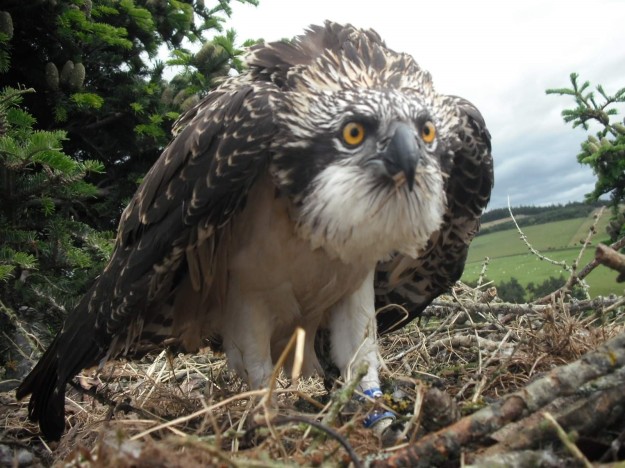 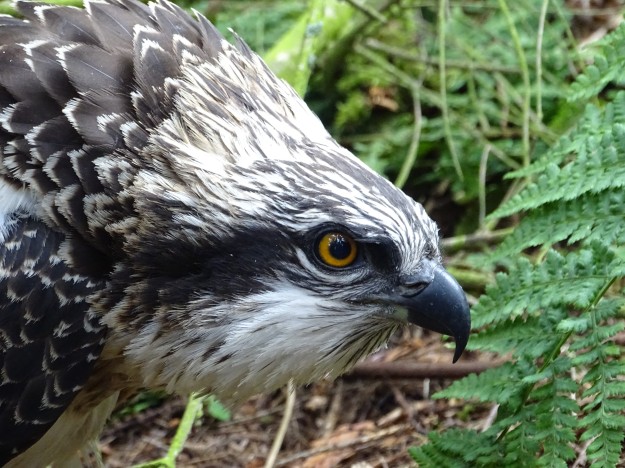 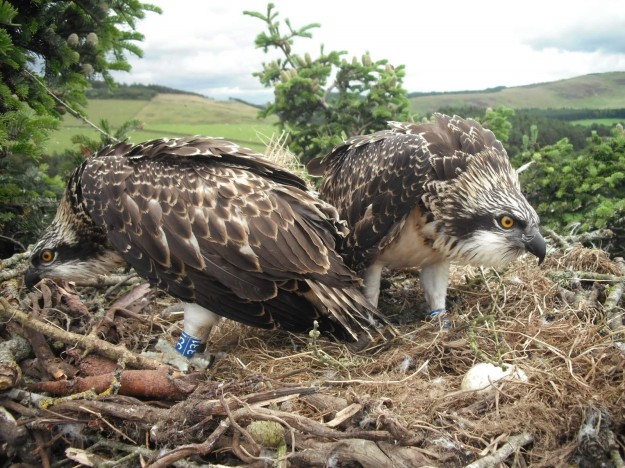 The Environment Team visited another nest in the Borders this week. A new nest built by an osprey pair this season, it is home to two very large and healthy looking young. The two young ospreys were ringed and found to be one female, which was fitted with Darvic ring 330, and a male, fitted with ring 331.

We do not know the identity of the adult birds. The nest that they have built was found to be robust and in a very tall and densely branched tree. An unhatched egg was found in the nest also which was removed for analysis by the Raptor Study Group. 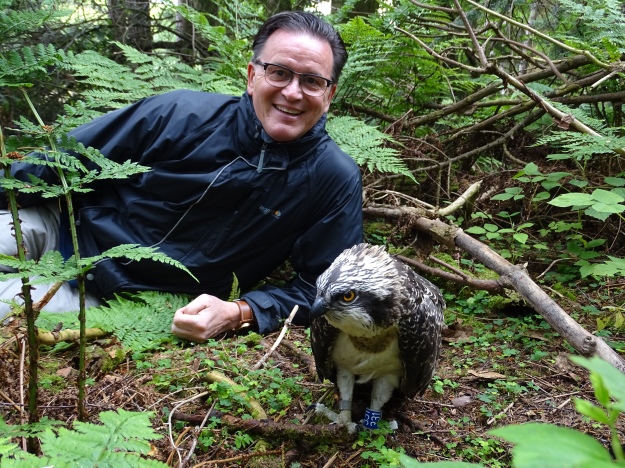 Names for the chicks? 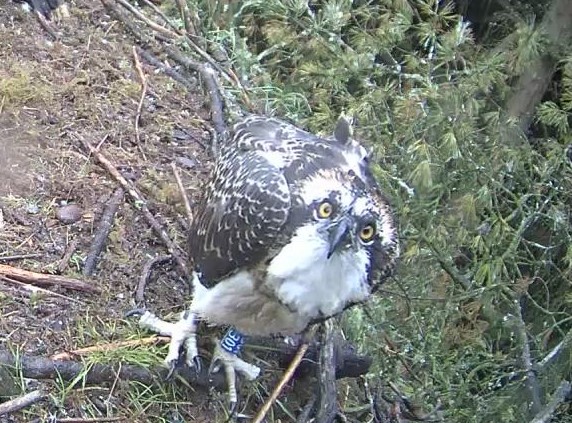 I need a name not a number!

We have had a few suggestions for names of the main nest osprey young, but not many! If anyone has any suggestions, please let us know. This year’s brood consists of two females and a male. It will be the two females that we will be tracking once they migrate, so it would be nice to refer to them by a name not a number.

Highlights from the nest this week

All the action from the nest this week was caught on camera – take a look, click the image below!