Mrs O and PW3 have had a few disturbances this week and have been seen looking skywards in alarm. PW3 has been hunkering down over the eggs, adopting a defensive, wings out posture and alarm calling. We cannot see what has caused the alarm and have to surmise that it is most likely another osprey intruding on their territory. But even when we have zoomed out the camera, we have not caught sight of the cause of their upset. Nothing serious has happened and although it has led on occasion to PW3 flying off, or Mrs O taking to the sky, mostly one or other of the pair have stayed tight at the nest to guard the eggs. This behaviour has come with experience, thankfully, and it's good to see they are protective parents, putting the safety of their eggs first. 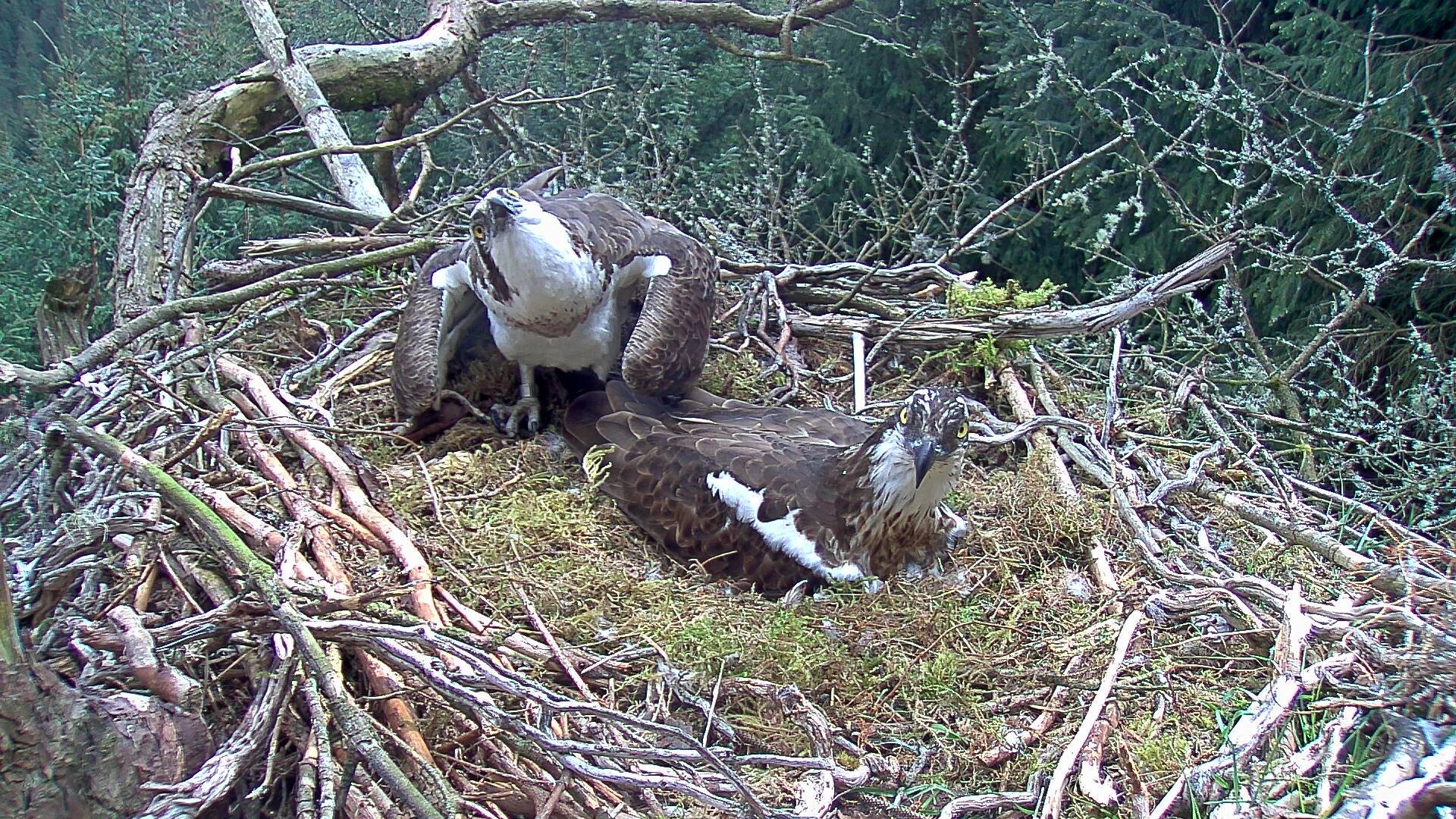 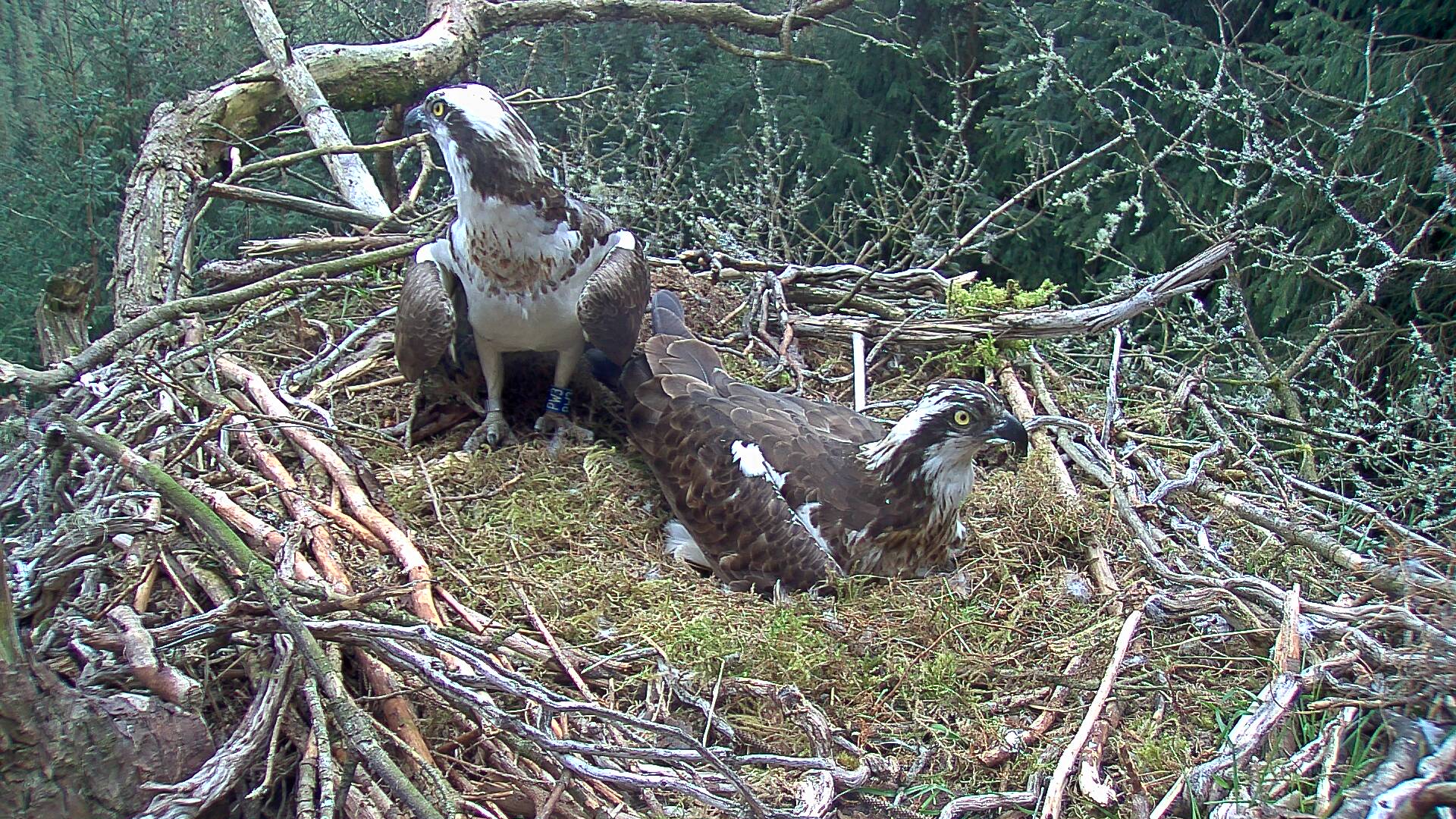 > Mrs O and PW3 alarmed and looking up at the sky

A prolonged session of alarmed and startled ospreys was witnessed at the nest at the weekend. Again the disturbance was mostly from above, as that was where both birds kept looking. They repeatedly ducked their heads as though something was swooping at them but again no harm came of it - apart from some minor distress. They have gotten off lightly compared to some ospreys, as cheeky intruders are known to land at other nest sites. So at least our pair are just having to put up with the occasional ‘fly-by’ and no drop-ins from an unwelcome guest. 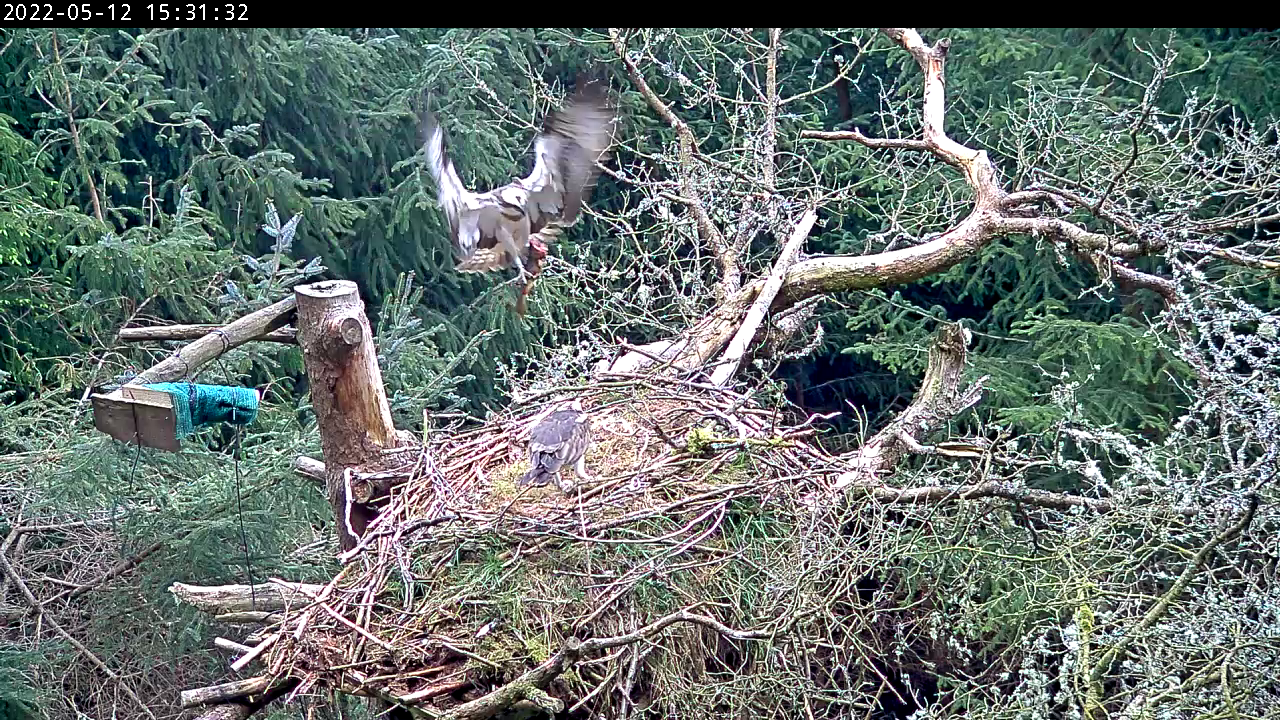 PW3 has been bringing fish for Mrs O. They have been sharing meals, taking it in turns to take the fish and go away to feed, later returning with the remains for the other to finish. We saw PW3 bringing a large, headless, brown trout which he had obviously already had his share from. He gave this to Mrs O and she took it away to feed, returning with the remains later. These were left to the side of the nest while she settled back down on the eggs. 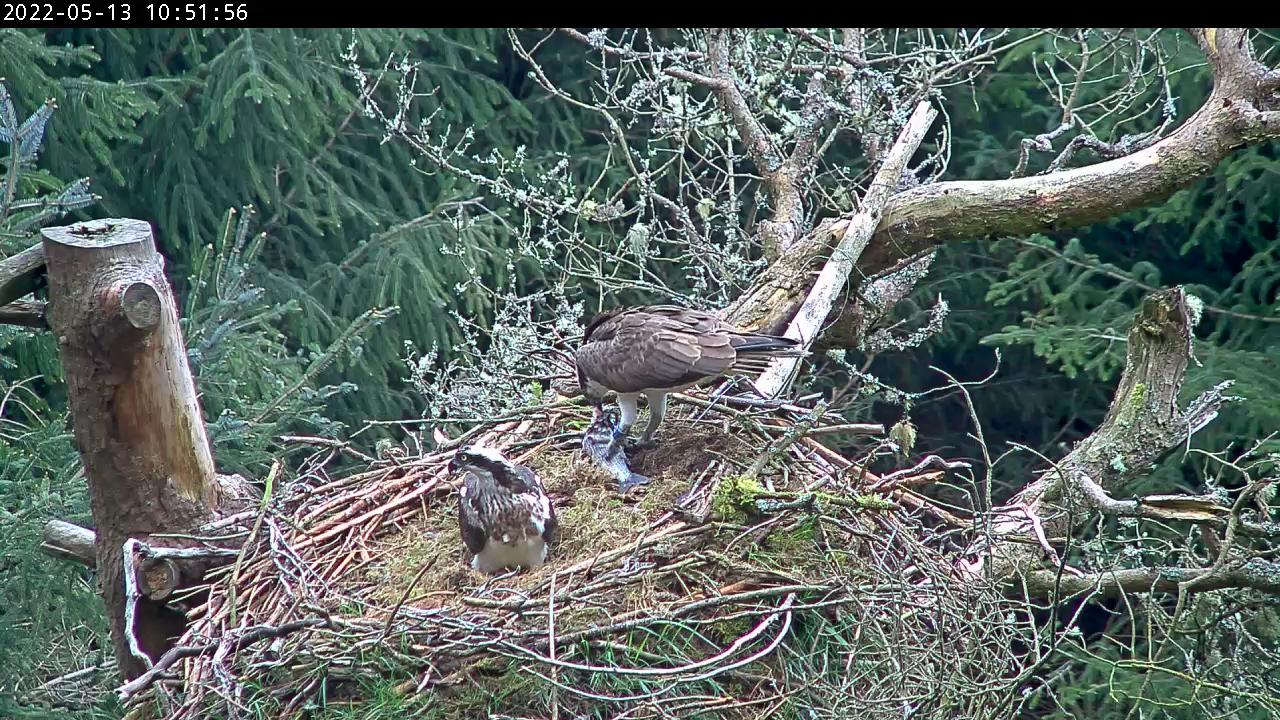 On 13 May, PW3 brought a grayling fish to the nest. This is the first time we have seen grayling brought in. It was a good size, identification confirmed by its horizontal markings on a very silver body. Grayling are known as the 'Lady of the Stream' for their silver appearance, almond-shaped eyes and their beautiful, large, violet-tinged dorsal fin. The River Tweed is renowned as one of the finest grayling rivers in Europe with some fish over 2lb in weight - some even up to 3lb are regularly caught by fishermen. The tributary of the Tweed, the River Teviot, is thought to be an even better grayling river to those in the know. It was a good sight to see that PW3 had caught one this season. 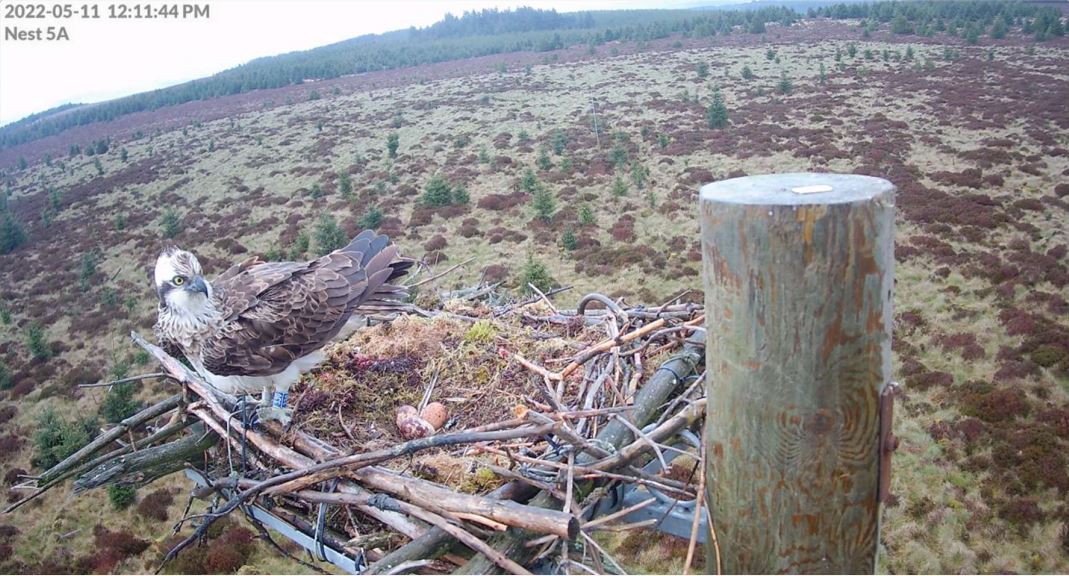 > 330 drops in at Kielder and scares the residents off briefly. Photo courtesy of Forest England.

We received news this week that Tweed Valley osprey 330, a female bird ringed at the nest when she was a fledgling in 2019, has returned to Kielder for the second year running. As a three-year-old female she is now seeking territory. She does seem to like Kielder but for her, unfortunately, all the nest sites are taken and the males there are already paired up. She is young and inexperienced and has a habit of turning up at occupied nest sites with eggs, generally making a bit of a nuisance of herself as far as the resident breeding pairs are concerned. But from our perspective, its really great to see her and to know how well she looks. It is only a matter of time before she does find a mate and territory. If a platform isn’t available, she may end up building her own eyrie with a partner. It would be really great if she did eventually nest at Kielder, as we would be able to get regular updates on her progress from the local team. 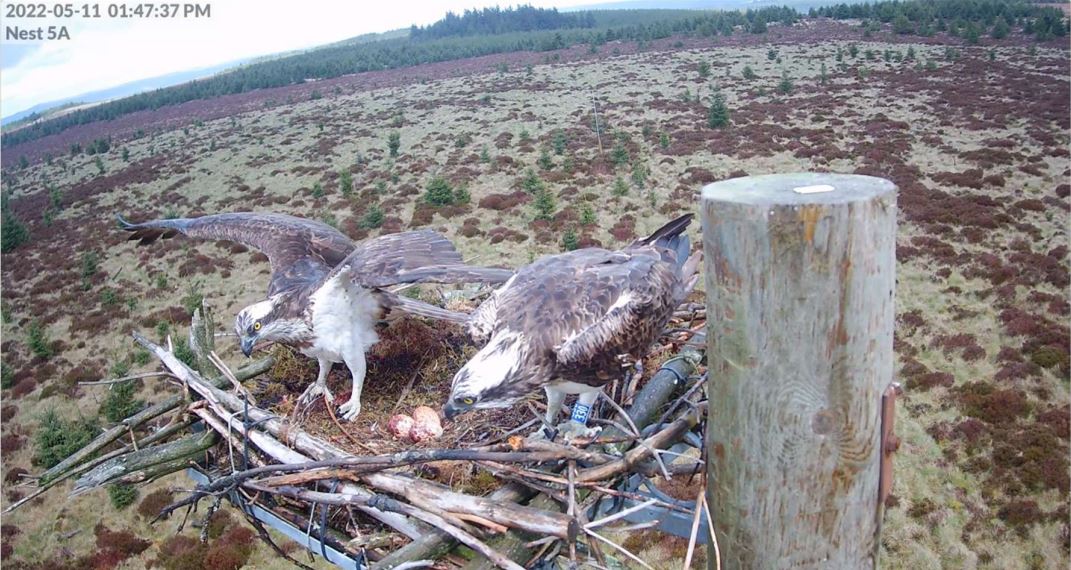