The osprey chicks at the main Tweed Valley nest hatched a couple of days apart - two on 29 May and the third two days later. This small time gap makes a lot of difference in terms of physical appearance and stature of the youngest chick. It is quite obviously smaller and weaker than its older siblings. 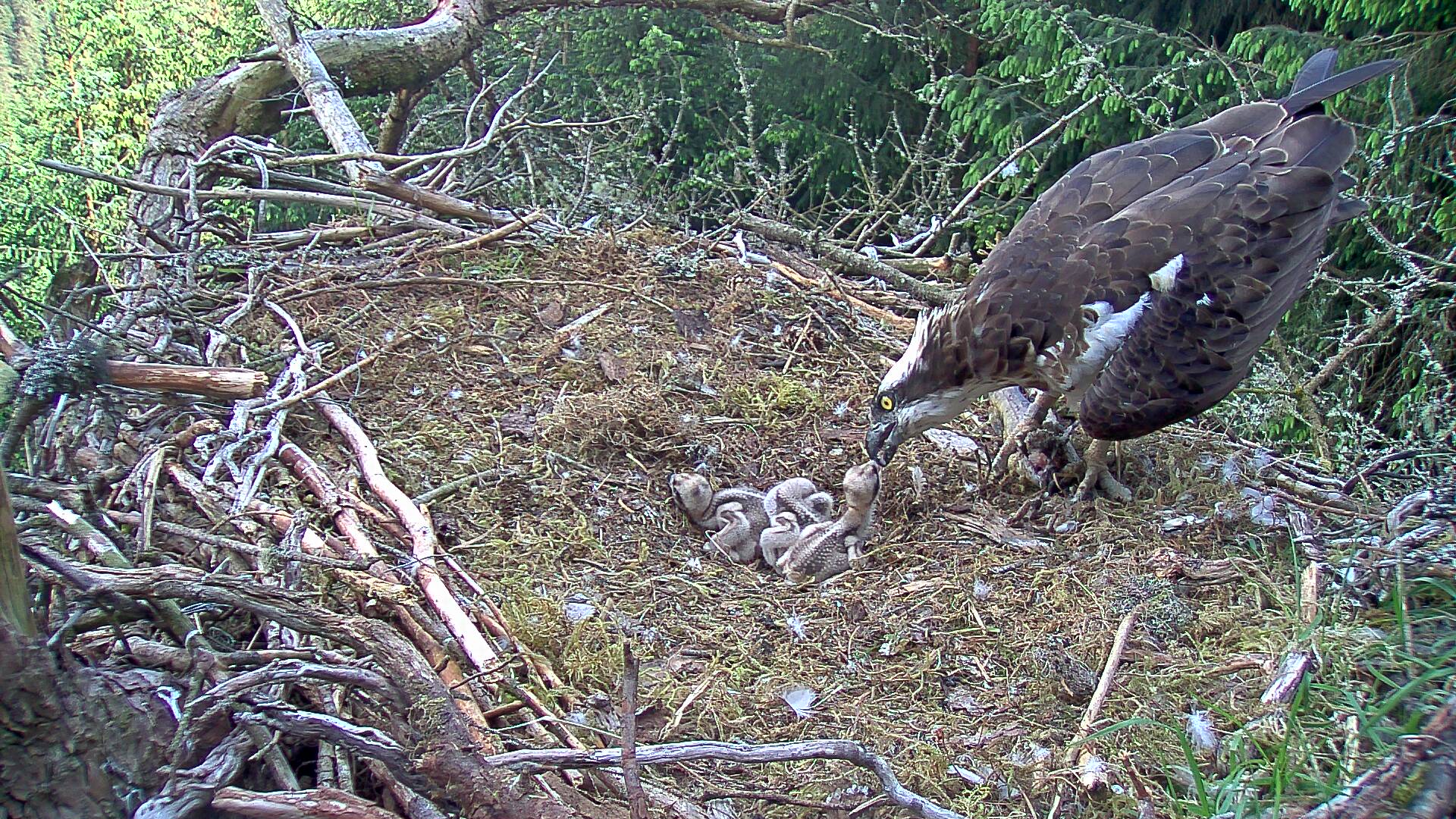 The stronger chicks get fed first, being bolder and stronger at coming forward towards to beg for food from mum. The littlest one is not quite there and, facing the wrong way, sometimes misses the little food morsels or drops them which can be a bit harrowing to watch. However, if enough fish is supplied by their dad, PW3, the smallest chick will catch up in no time at all. On 2 June, PW3 brought in a really big trout and Mrs O taking it from him and dragging it across to the chicks. They soon jumped up, very keen to be fed. The biggest chicks used their size advantage to reach above the youngest one who, after some effort, was still able to feed well. Mrs O gently kept offering small food pieces to it and, eventually, it was happily swallowing this down. 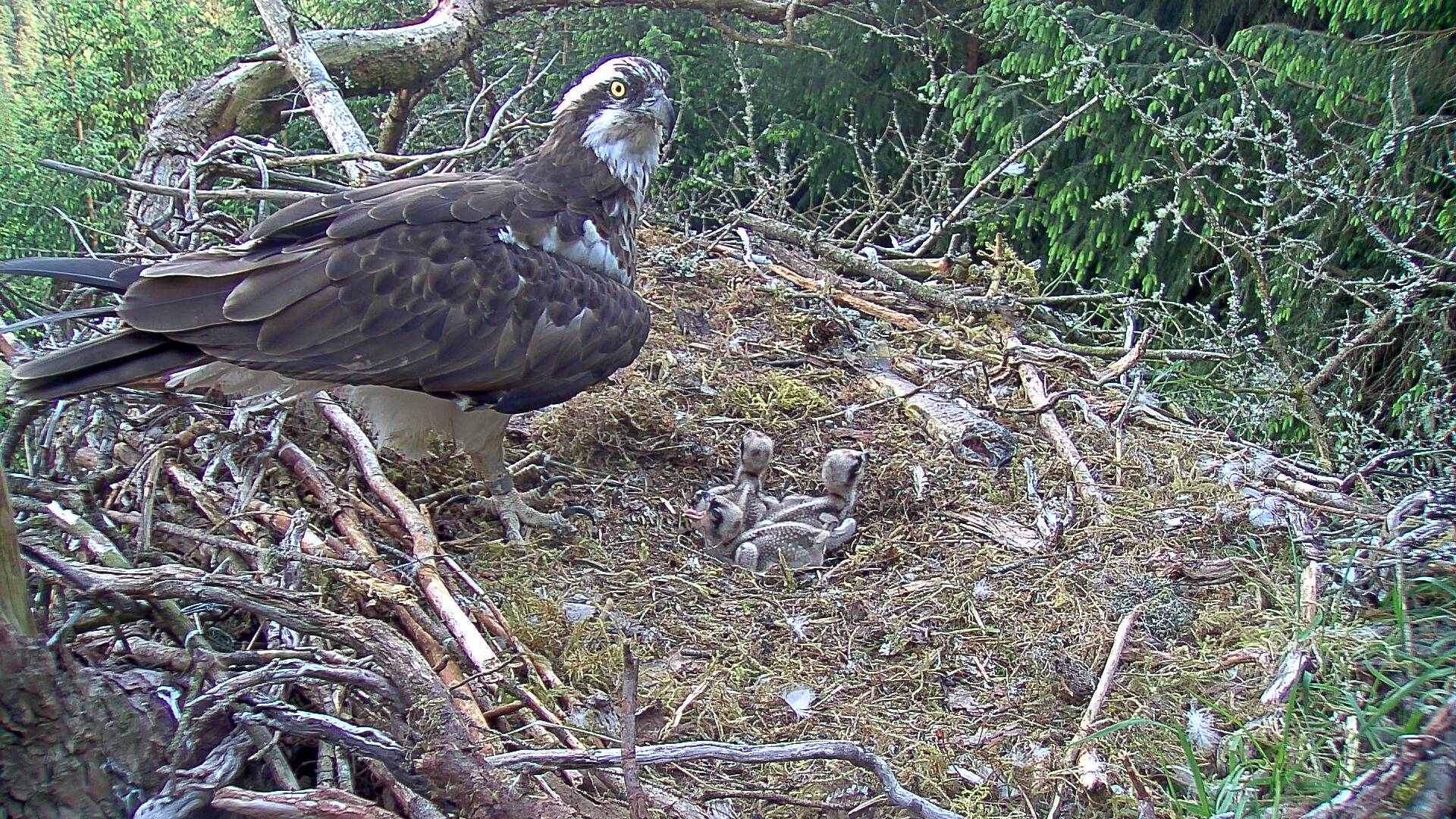 > The smallest chick is at the top

There is a significant difference in the behaviour of PW3 this year. Last year was his first brood and he never spent time at the nest once the chicks hatched. He would literally drop the fish in and leave immediately. But this year he seems more connected with this offspring, spending much more time at the nest. He now lands with the fish and has been seen looking at and reaching down to the chicks. Mrs O still does all of the feeding and protecting of the brood. She may leave for the occasional quick toilet break, but she always returns very quickly. She might have a quick flight and a stretch while PW3 does some babysitting, but her absences are rarely longer than four minutes. 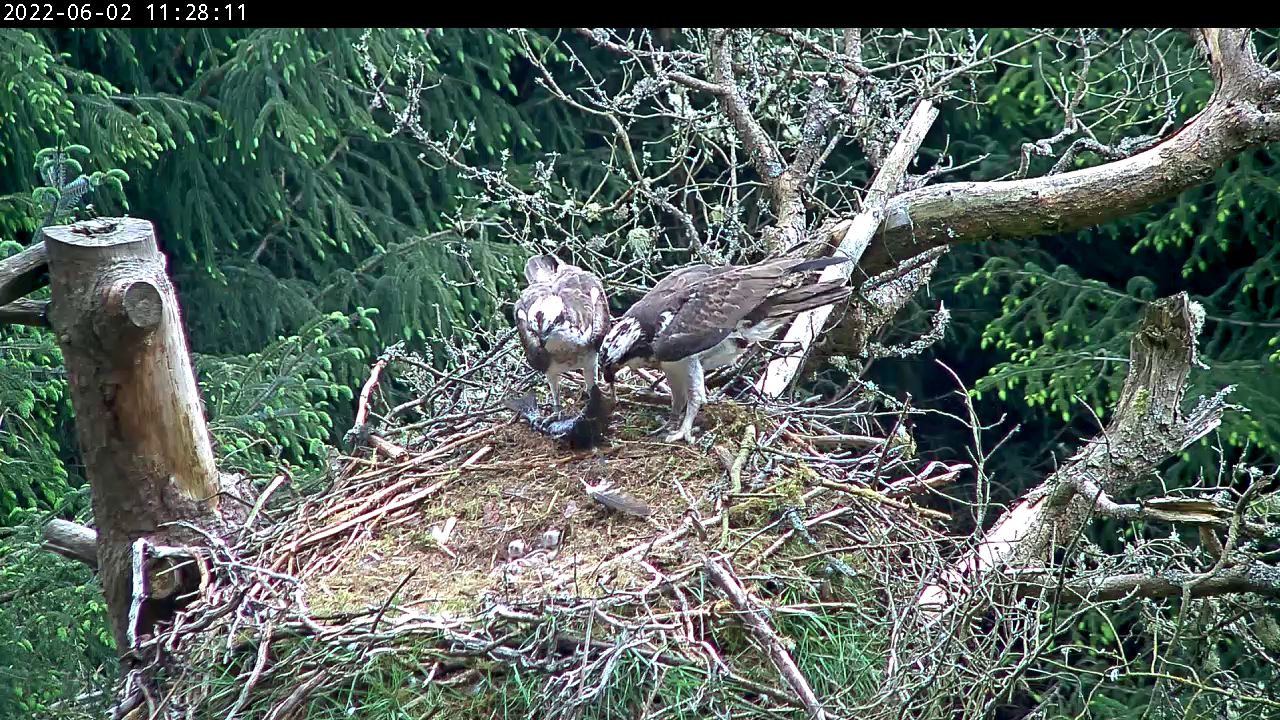 > PW3 delivers a big trout for his family

They have more experience as a couple now and seem to be relaxing more into family life together with their brood.

The chicks are covered in a soft grey down which gives them some warmth, but they are not insulated against the weather and cannot thermo-regulate their body temperature. While they are vulnerable at this stage of their lives, it is the warmth from their mother that keeps them warm and protected. She nestles them beneath her after a feed, where they spend much time sleeping. In warmer weather she can get up, allowing them to stretch on the nest and spread out from their usual huddle. However, they also need to be shielded if the weather should become too hot - Mrs O acting like their sun shade (or umbrella, if it starts to rain). 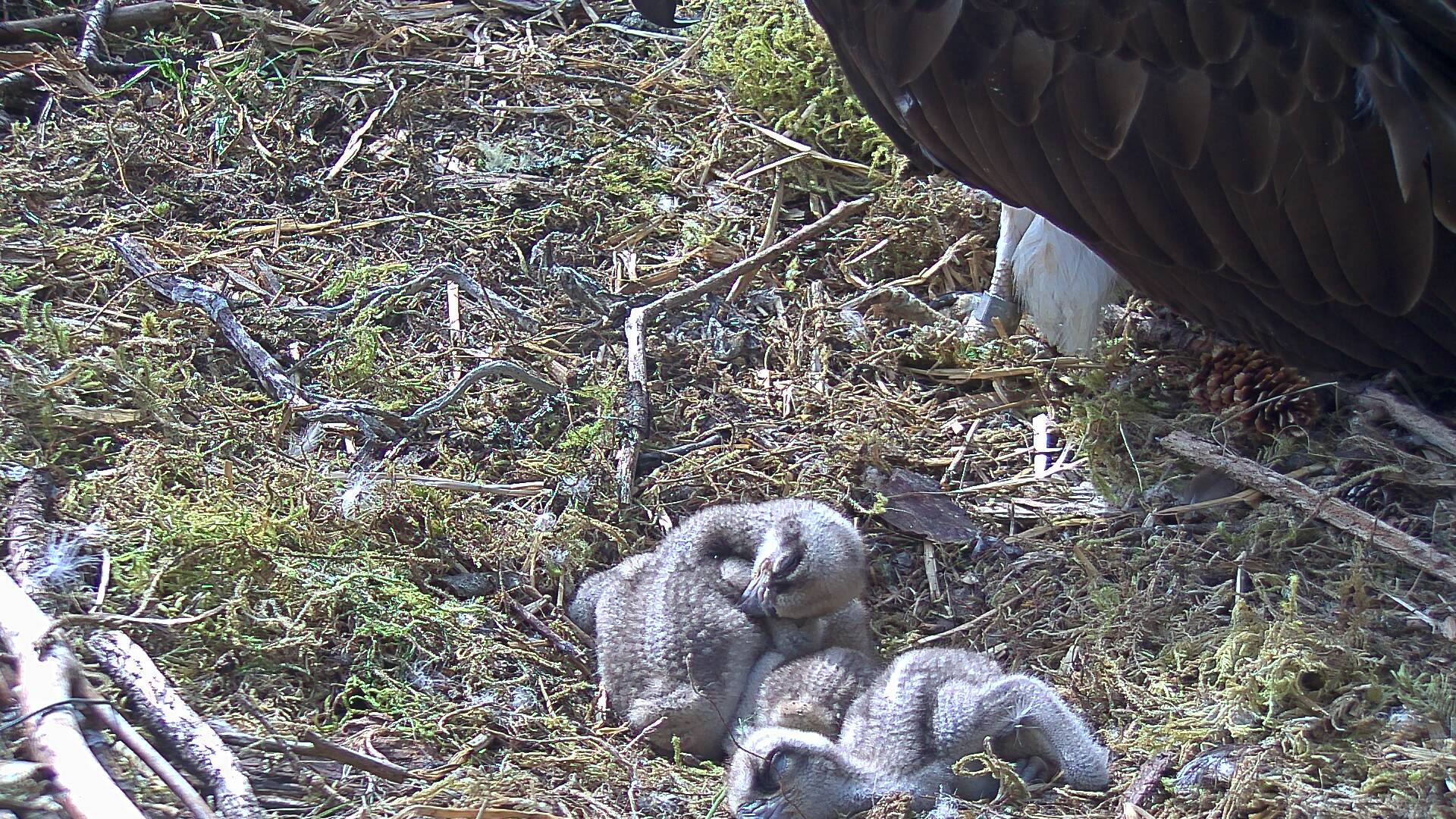 > Sleeping in the sunshine

The chicks grow at a super-fast rate and there is a marked difference in their appearance and level of strength at only 7-9 days old. They use their wing buds like props to push themselves up, their chunky legs carrying their body weight into an upright standing position. Their previously wobbly heads are now firmly balanced on sturdier necks, and every single day they get a bit bigger and stronger as they gain weight from their protein-packed diet. 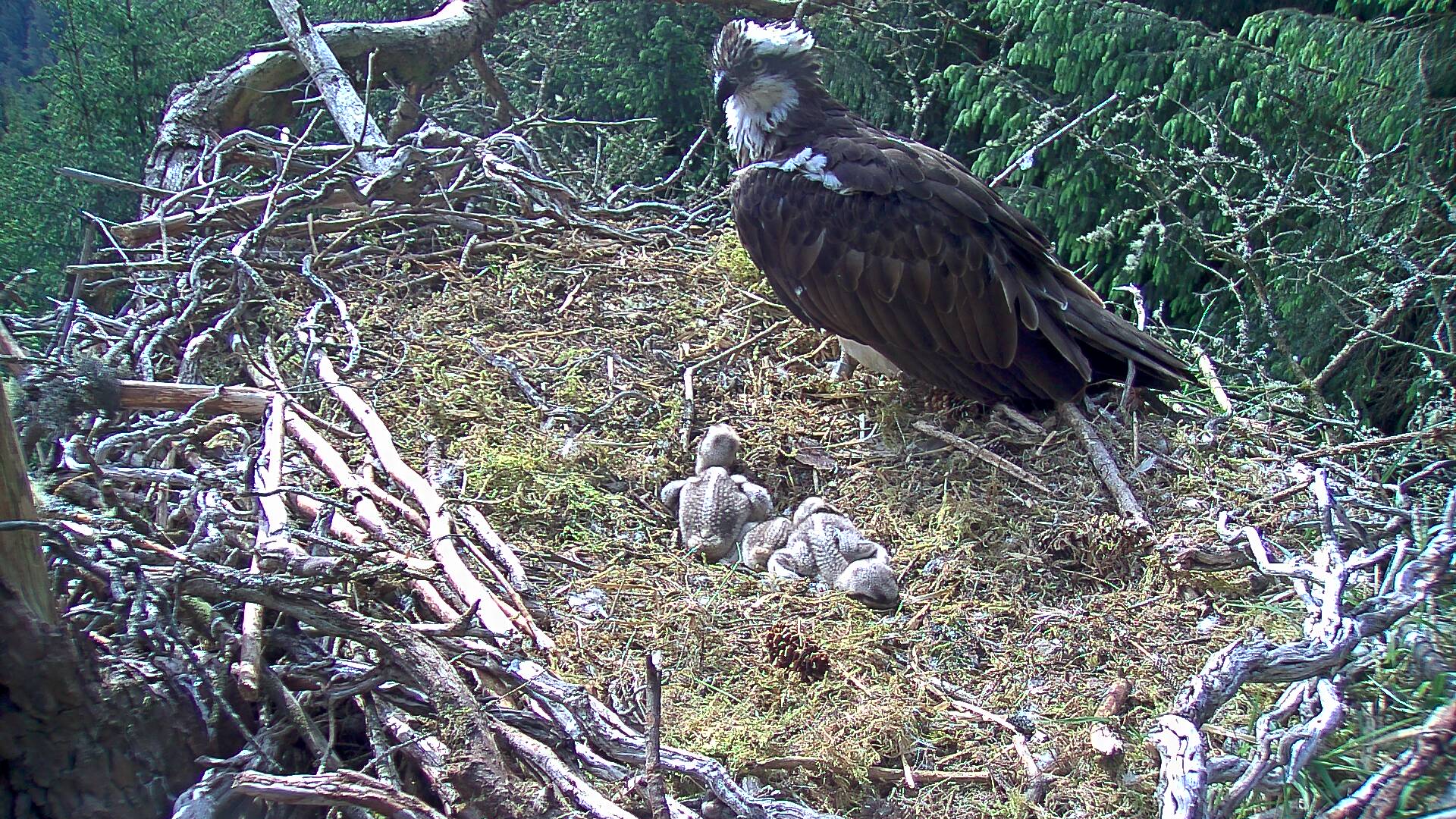 > Chicks in the middle of their big nest space

The nest looks huge but the chicks only stay in the small space in the middle scrape for safety. This is surrounded by moss and then the outer edge of the nest is built up with sticks. As they get bigger they will occupy so much more of the space and by the time they are fully grown there will barely be enough room for all of them.

As Mrs O sat over the chicks on 7 June, she seemed a little restless and fidgety. Looking carefully you could see ants walking along the stick next to her in the nest. There are lots of flies as well. Forest ants are not likely to bother the ospreys though, and after a quick forage are likely to move on. They may even prove to be beneficial, picking off any mites on the nest.

> Fidgety Mrs O and ants along the stick