This time of year seems to come around so fast. It feels like only yesterday we were waiting for birds to arrive, then eggs, then hatching. Now we are six weeks into the young ospreys lives and it’s time to fit their leg rings and tracking devices.

The team from Forestry and Land Scotland and the Raptor Study Group, consisting of Tony Lightley, Eve Schulte and Ronnie Graham, led the expedition to the nest site. This years lucky volunteers were also invited to attend to see the birds, along with representatives from Forest Holidays. 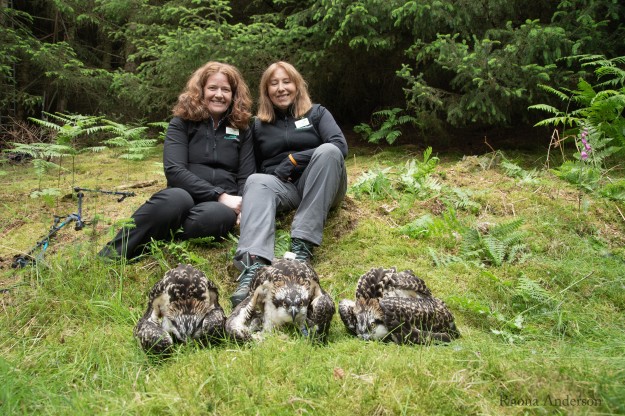 Forest Holidays sponsored the satellite tags for the chicks last year, both of which sadly died. However, one of the tags was recovered and refurbished for re-use on one of this year’s young.

“The natural world is never predictable and whilst we were sad to learn that Tweedledee didn’t survive last season, we know that the data that was gathered during the tracking is invaluable to the project and the understanding of these birds. We’re also delighted that her tag could be refurbished and will now be used to monitor one of this years chicks. We very much look forward to watching the progress of all the birds and sharing updates with our guests as they fledge and leave the nest”. 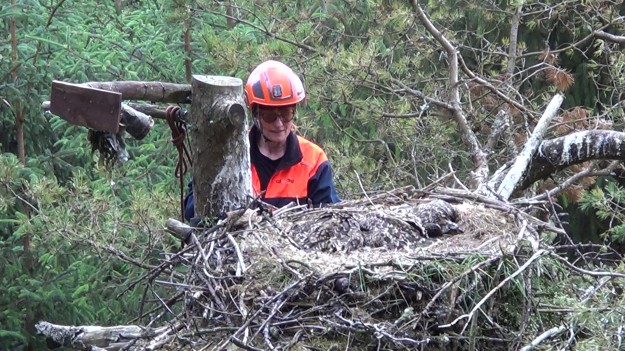 Eve gently arrives at the nest and meets the chicks

The expert team and the ringing and tagging

Whilst the team prepared the equipment down on the ground and volunteers settled themselves to sit on the forest floor, Eve tackled the climbing of the nest tree to bring this years youngsters down from the nest. Once she reached the top, she put each of the chicks into the duffel bag and lowered them down on a pulley, one at a time, to Tony at the bottom of the tree. The chicks were then removed from the bag and allowed to settle themselves on the forest floor while Eve abseiled back down to the ground to carry out the task.

Three young from the main nest. Photo by Rhona Anderson.

The chicks were assessed and given a health check before being weighed and measured. The two largest and strongest chicks were selected to wear the satellite tags.

The first in line was a female osprey chick weighing a very healthy 1750g. Eve carried out the process of fitting the silver BTO leg ring to the right leg bearing the unique reference number. Then, on the left leg, a blue Darvic with white digits ‘301’ was fitted by Eve and Ronnie. A DNA swab was also taken from inside the bird’s cheek which will be sent off for analysis to determine DNA links between populations in Wales and Scotland. 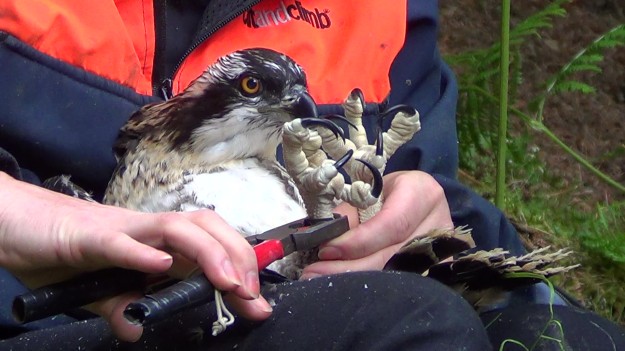 Next the satellite tag was attached to the young bird. The device, weighing just 23g, fits neatly between the shoulder blades with a solar back panel facing skywards to charge it. A foam backing ensures comfort for the bird. The tapes from the tag go over the back and shoulders, under the wings and meet in the middle of a central plastic disc on the bird’s chest where they are stitched together using hemp thread. This is designed to last up to 7 years and, when it rots, all four ends would be released together, freeing the bird from the device. The plastic disc, which holds the ends in place until the stitching is done, is cut away once the thread is in place. 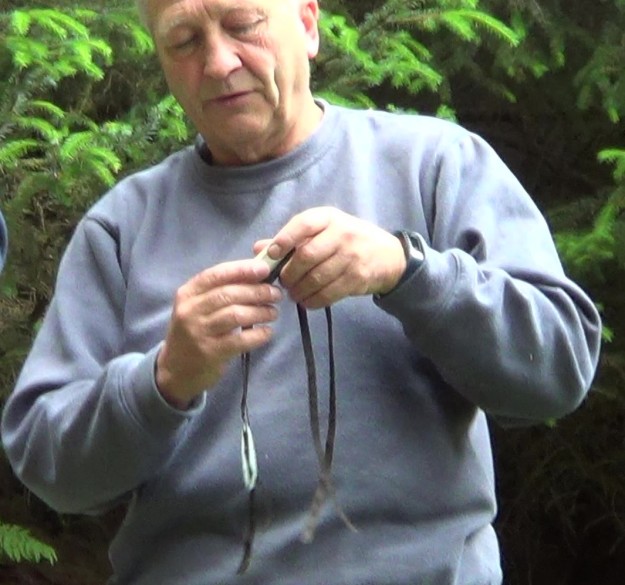 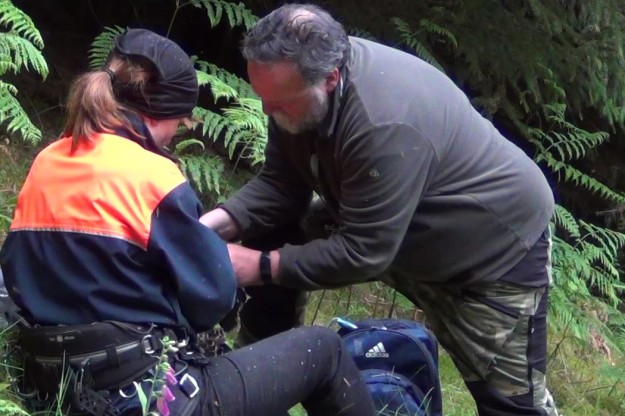 Eve and Ronnie ringing the chicks

The next osprey to be ringed was number 302, the smallest of the three at 1500g and likely to be a male bird.

Finally, the third osprey was ringed with number 303. This was thought to be a female bird weighing 1620g; another good-sized healthy chick.

Satellite tag on one of the main nest ospreys 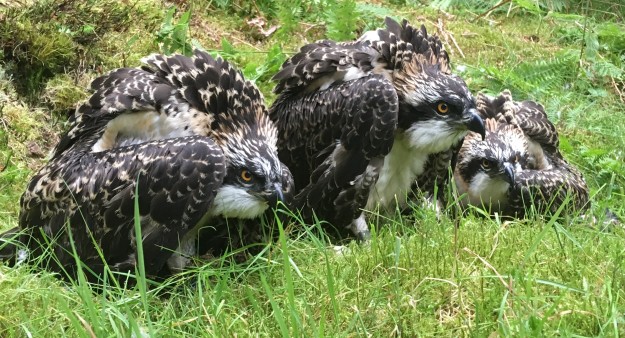 Three young from the main nest. Photo by Lorna Corley-Jackson.

We wish you a long and happy life journey

Once all the processing was done it was time for a few photos and an opportunity for the volunteers get up close with the birds and admire them. It is quite an emotional moment to meet the chicks that you have been monitoring daily since hatching and especially from parents that are so fondly regarded. There were a few emotional murmurings from volunteers wishing the youngsters a safe and happy life before it was finally time for them to be put back up into their eyrie. 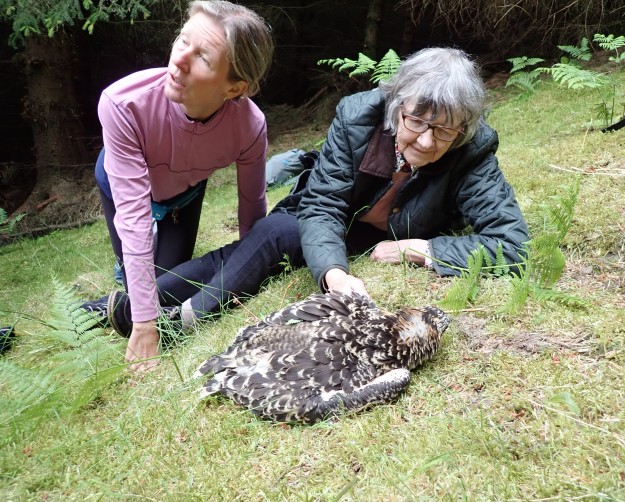 Interestingly, during their time out of the nest, there were three adult ospreys flying above. Two would be Mrs O and SS, their mum and dad, but the other bird is possibly a first time migration returner. Hearing the initial alarm call of the ospreys when the ringing party arrived may have drawn the curious onlooker to see what was happening!

SS went off to catch a fish in a nearby loch, returning with a fish in his talons just as the ringers were about to leave. This was a good sign that there was to be a meal after the group left. But to make sure the family were well fed, a couple of fresh fish were left behind in the nest as a little thank you from the ringers. 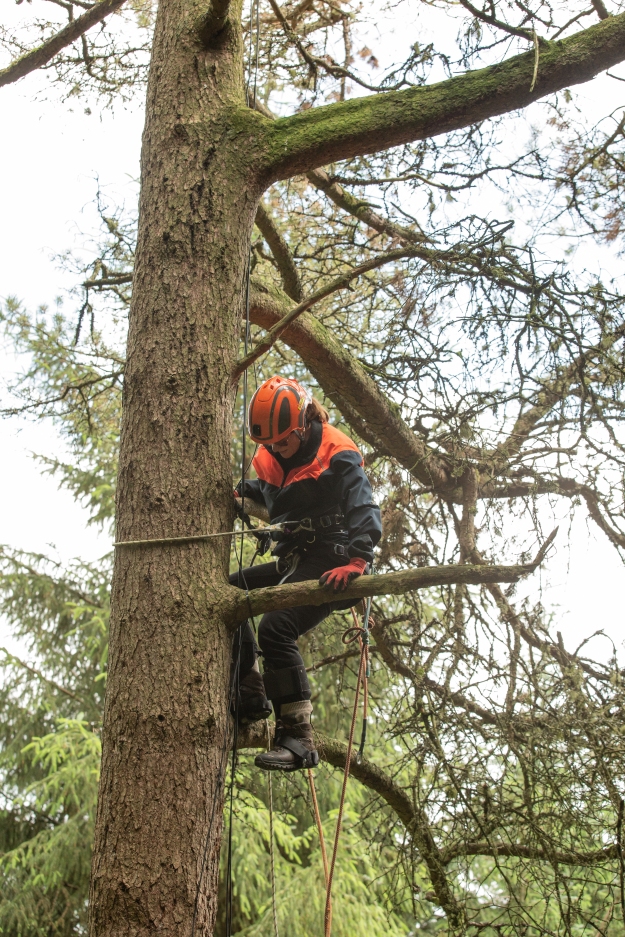 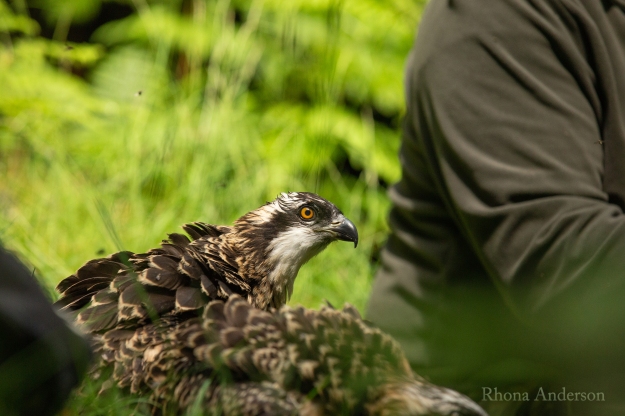 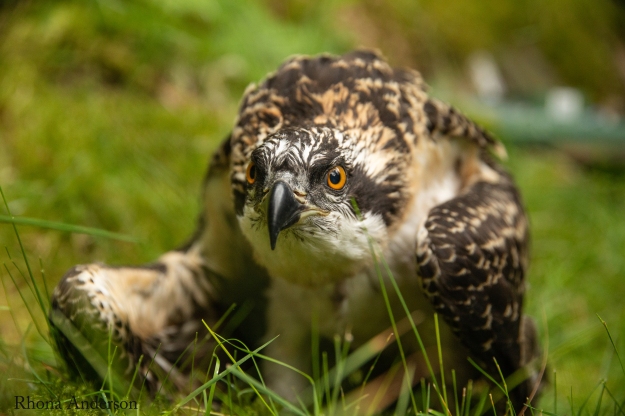 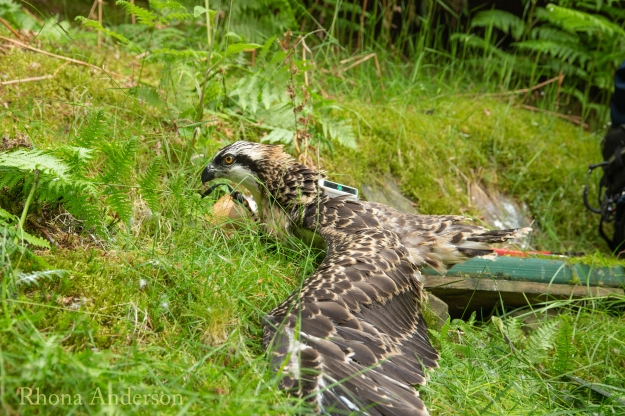 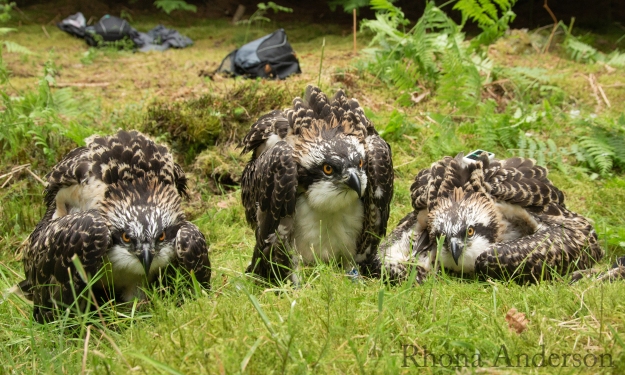