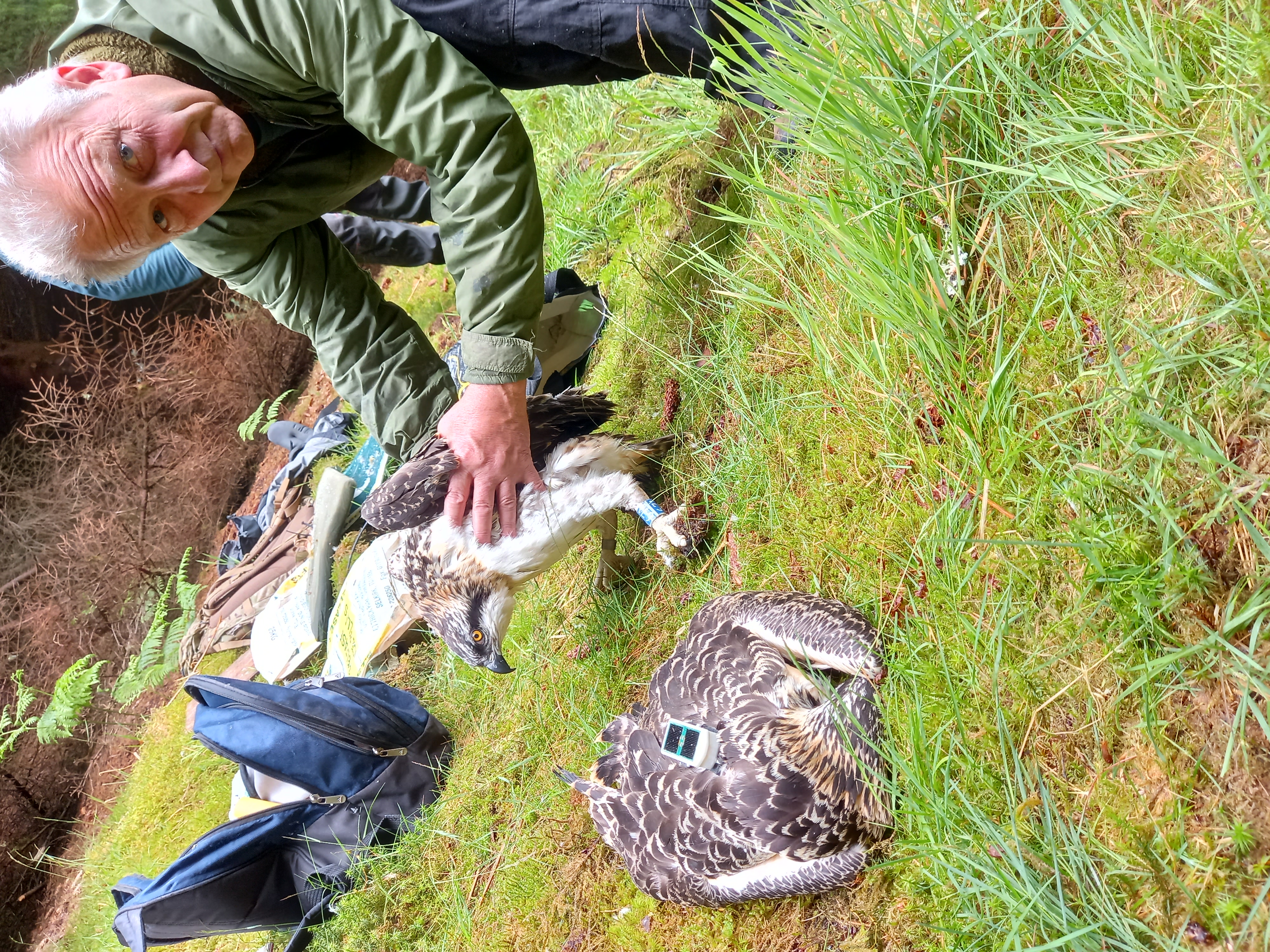 The ospreys in the main Tweed Valley nest were 40 days old on Monday 5 July and this was now time for them to be fitted with their darvic rings and their unique BTO rings (British Trust for Ornothology) for identification. The Environment Team from Forestry and Land Scotland consisting of Tony Lightley (Environment Forester), Eve Schulte (Environment Ranger), Derek Rodger (Environment Assistant) and Dave Anderson, the environmental consultant from David Anderson Ecology Ltd who is licensed to fit the satellite tracking tags, visited the site to carry out the work.

Eve climbed the nest tree and carefully lowered both chicks to the ground individually on a pulley system where they were each given a health check, weighed and measured.

One of the chicks weighed 1720g and the other was slightly heavier at 1760g. Their wing lengths were also measured with the lighter chick having wing length of 325 mm and the other with 350mm. Both birds were deemed fit and healthy and based on the data were thought to be female. 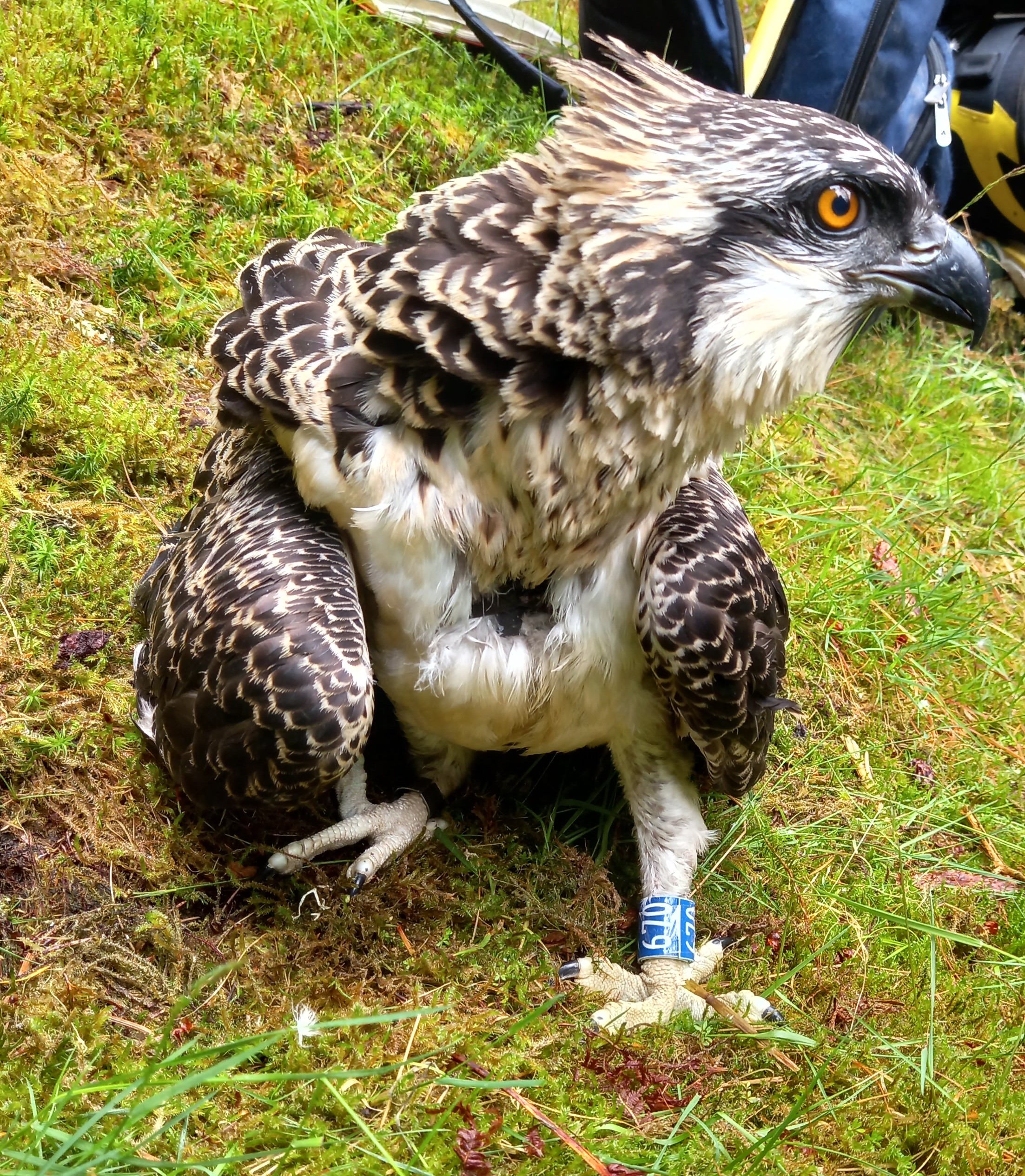 Blue darvic rings were fitted with white lettering on the left leg of each bird and the silver BTO ring fitted to the right leg. The darvic numbers were 670 and 671. A decision was made to name the birds because they were fitted with satellite trackers, so that we can monitor and report their progress after they fledge. The names chosen correspond to water bodies in the area. Megget was the name given to osprey 670 and Talla was the name picked for osprey 671. When these young birds eventually migrate, we will be able to track their progress, follow their route and know where they migrate to. Some of the previously tracked Tweed Valley birds have migrated to Mali, Gambia and Portugal. We have also been able to determine the demise of others which have met with fatal disasters such as overhead power lines in Dorset and predation by an eagle owl in Switzerland.

The young ospreys were carefully returned to their nest after ringing and tags fitted and then the team departed from the site, leaving the birds to get back to normal as swiftly as possible. When the team had arrived in the morning, it was interesting to see that there were three ospreys flying around the nest site initially and there was a lot of alarm calling by the adults as they were dealing with the intrusion of the third bird. Younger female birds of pre-breeding age have been witnessed at previous nest sites, although they've generally been tolerated by the resident adults as non-threatening to their brood. 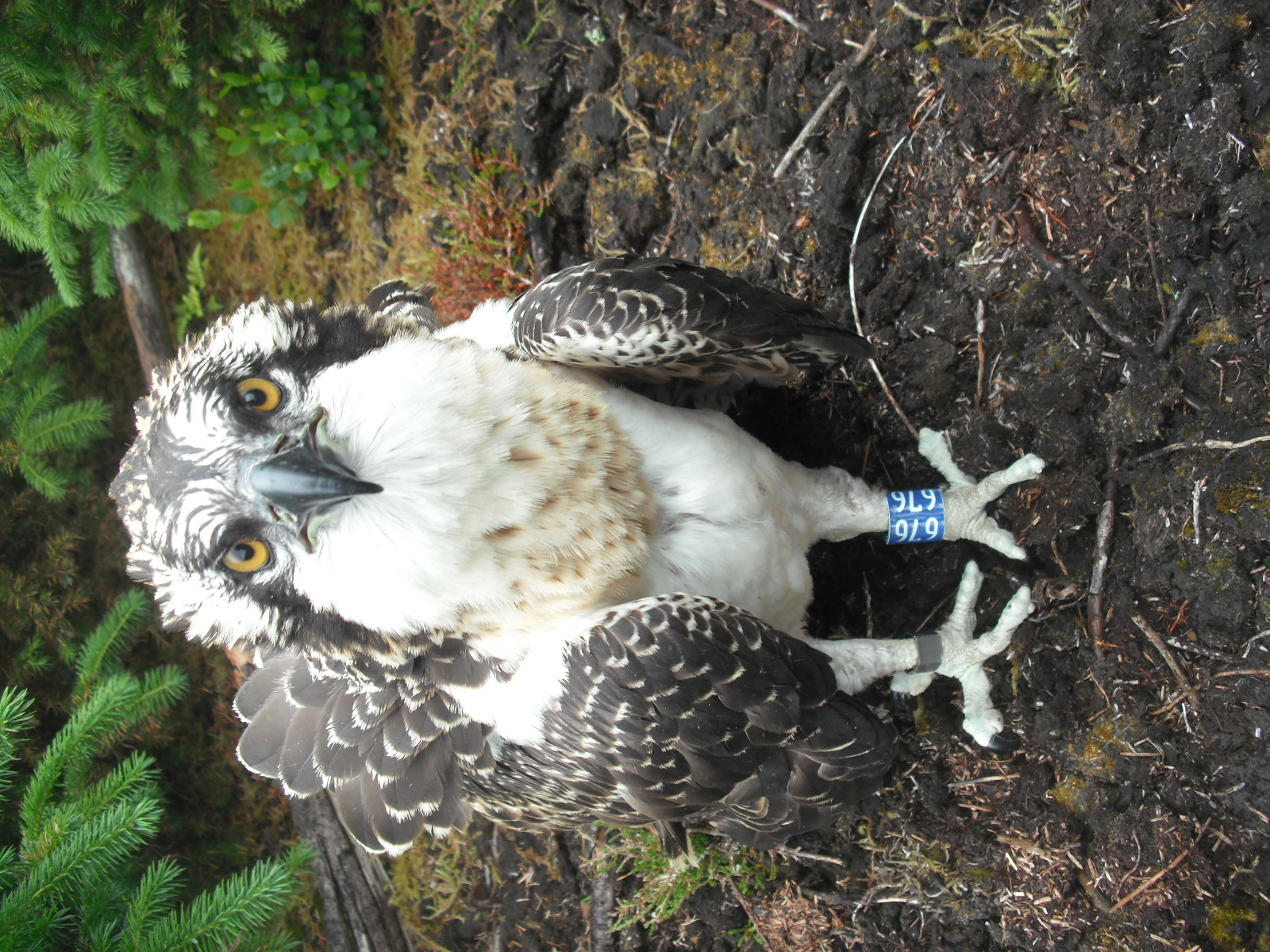 A fantastic example of this behaviour was witnessed at Kielder Ospreys on 4 July when Tweed Valley 2-year-old female 330 returned to one of their nest sites having visited alongside her brother the previous week. This time the cheeky young bird landed on the nest with the two young fledgelings and was treated as a young bird instead of an intruder. The resident male flew in with a fish which was taken by 330 and she began to eat it. When the female from the nest returned, she was non aggressive and allowed 330 to continue to feed and took the remaining fish from her when she had finished. The female, Mrs YA, then fed the remaining fish to her own brood of two whilst 330 remained in the nest to the side of them. The presence of 330 was tolerated into the next day too as the live streaming revealed that she was still there. She had taken another fish from the male bird YA and fed a second time until eventually Mrs YA drove her away. Once she was aerial, Mrs YA treated her like any other intruder and chased her from her nest. It will be interesting to see whether this Tweed Valley female stays around the Kielder nest over the coming days. The success of being fed by this family will not deter her that’s for sure but whether Mrs YA will allow her to remain is another matter as it does mean a burden in terms of food sharing, which ought to be given to her own brood. 330 has been at Kielder since 14 June when she was seen at another of their nest sites.