Sadly, this week is my last week for the summer osprey season… but it has been a great year at the main nest and the three young ospreys are doing really well. They give the impression of feistiness and strength, especially when compared with last years young ones. 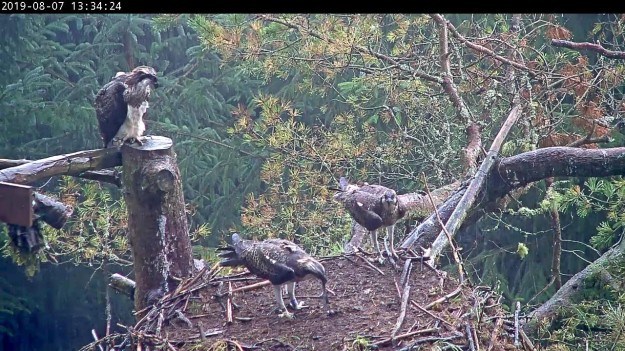 The youngsters hanging out

There have been some superb name suggestions sent to us, and eventually, we decided on a lunar theme. Willie Mair and Rhona Young thought that it would be fitting to mark the anniversary of the Apollo 11 moon landing anniversary, as we had already celebrated a 20th anniversary for SS this year.

We have chosen the name Luna for osprey 301 to mark the lunar landing. Hope will be the name for 303, from Lorna’s suggestion, while the male osprey 302 will be called Buzz, in honour of Buzz Aldrin (not Buzz Lightyear!). Thank you to all those who took the time to offer suggestions, as that was much appreciated! 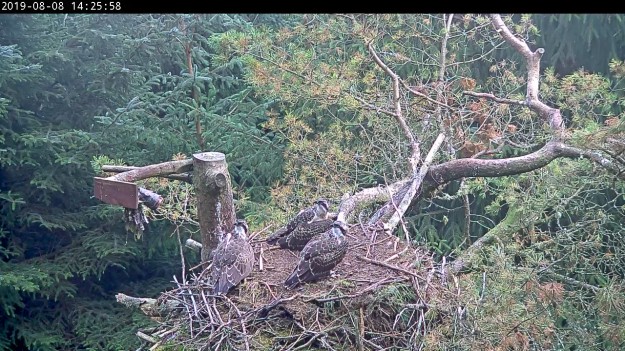 As the season draws to a close, we haven’t seen Mrs O for a few days. We think that she may have left for southern winter skies already. She has done an absolutely brilliant job raising three young with her partner, White Leg SS. He is definitely still around. His visits to the nest involve only the briefest touchdown to deposit a fish for one of his offspring, then he alights and is away again in the blink of an eye. We hope, very much, that we will see him back next year, partnered with Mrs O for another successful season. 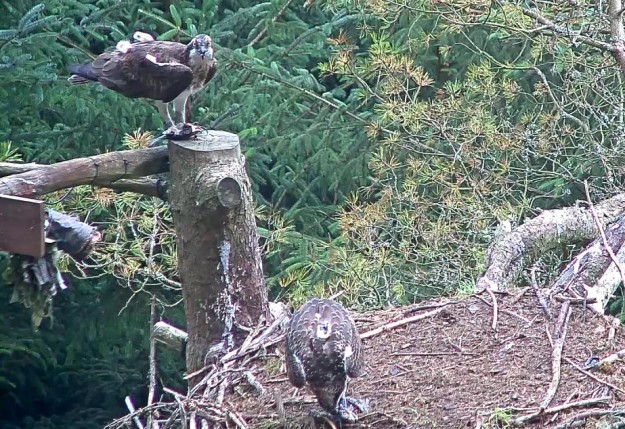 Mrs O with feathers sticking up and Hope on the nest, both eating fish 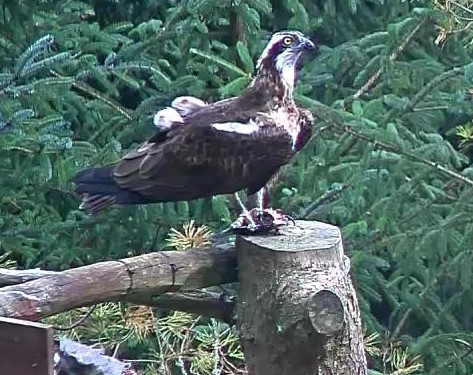 As for the three young ospreys, they are still hanging out at the nest to feed. The last view of Mrs O at the nest was 7 August, when she arrived with a fish. 303 (Hope) was already eating fish on the nest. They both sat there eating, Mrs O up on the perch and Hope on the nest. Mrs O had two feathers on either side sticking right up, looking like the spoilers on a sporty car. Is this the tail end of her summer moult before she takes flight?

Later that day, 302 (Buzz) was sitting alone on the post when a jay decided to visit. The little jay hopped about while Buzz watched and then both sat at opposite sides of the nest on the perches quite contentedly. 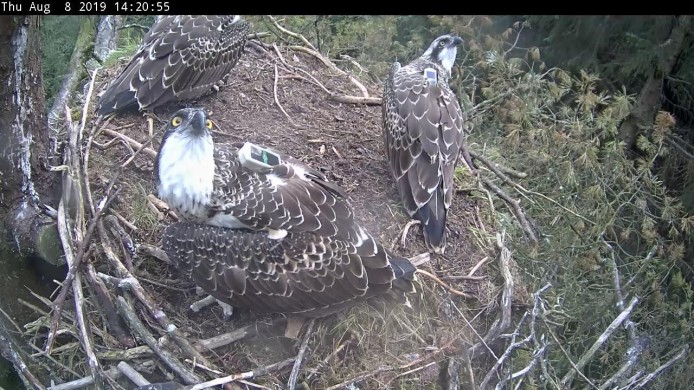 Buzz has the fish, Hope and Luna stare upwards, watching SS in case he has more fish.

On 8 August, all three young birds were seen at the nest together, tracking a bird flying in the sky above them. They were dropping and flicking their wings, calling quite excitedly. A fish was brought in and dropped off to them - we think by SS - but it happened in a flash before he was gone again.

Buzz grabbed the fish, which was only small but very much still alive and flapping about. He was unsure what to do and tried to hold it down to keep his sister, Hope, from making a steal. The fish had smudge markings down its flanks and was possibly a parr. It looked golden in colour as the light caught it. Buzz was definitely not up for sharing, especially when Luna made an appearance at the nest with a flying swoop as she dropped in. 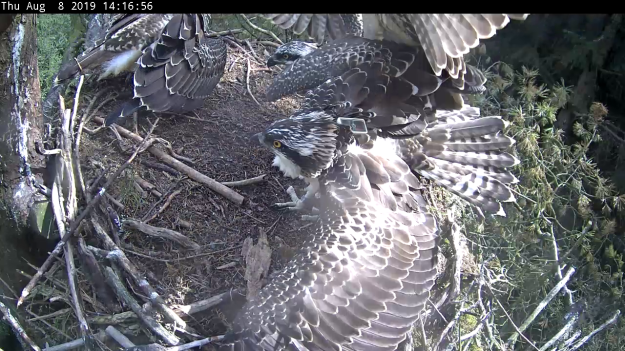 Buzz kept walking around the edge of the nest, keeping the fish away from his sisters. His strategy was to hold it down in his talons until it weakened before he attempted to eat it.

The adult bird was flying around the nest above them and they kept looking skyward. The sisters were undecided as to whether they should keep watching dad in case he had some more fish or to keep watch on their brother in case he let go of his. 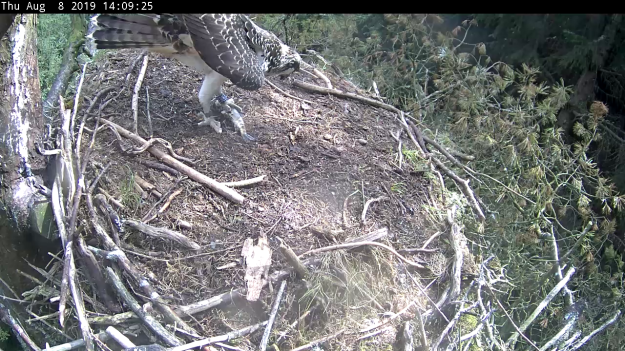 Buzz with the parr

The centres will remain open until the end of August, allowing visitors to catch a few last glimpses of the family before they leave. This week’s highlight from the nest are over on YouTube – click the image below to play.

There is a lovely film which shows the whole summer season, from Mrs O and SS arriving in the spring, to the laying of the eggs, incubation, hatching, and the patient rearing of the three chicks, showing how they developed week by week until fledging.

Thank you to all the volunteers for the Tweed Valley Osprey Project and our project supporters. The volunteers do a fantastic job keeping a watch on the nest and recording everything that happens. They greet all the visitors to the centres and make a visit so pleasant with tales of what the birds have been up to; always ready with a cheery smile and such enthusiasm.

Once the birds begin their migration, I will send in some updates to let everyone know how they are doing. We all wish them a safe journey and a long and happy life. Bye bye until next year! 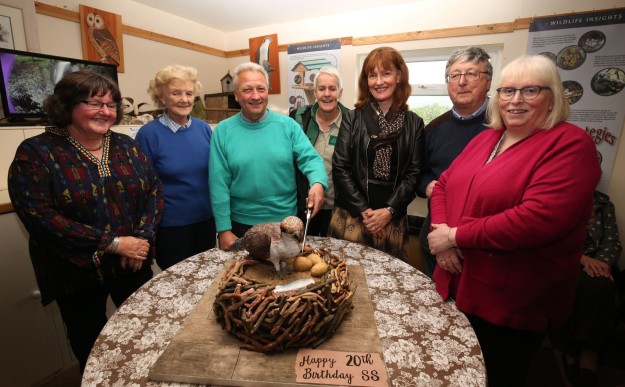 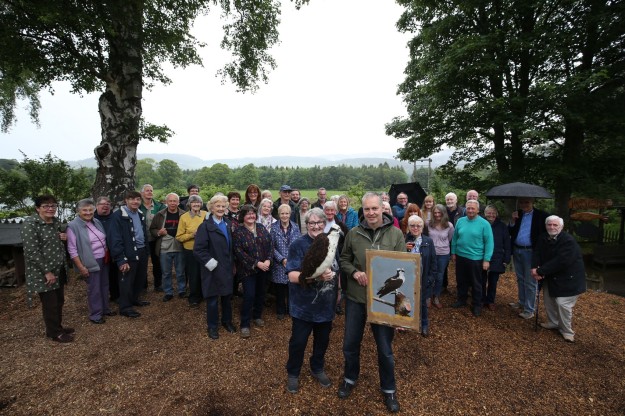