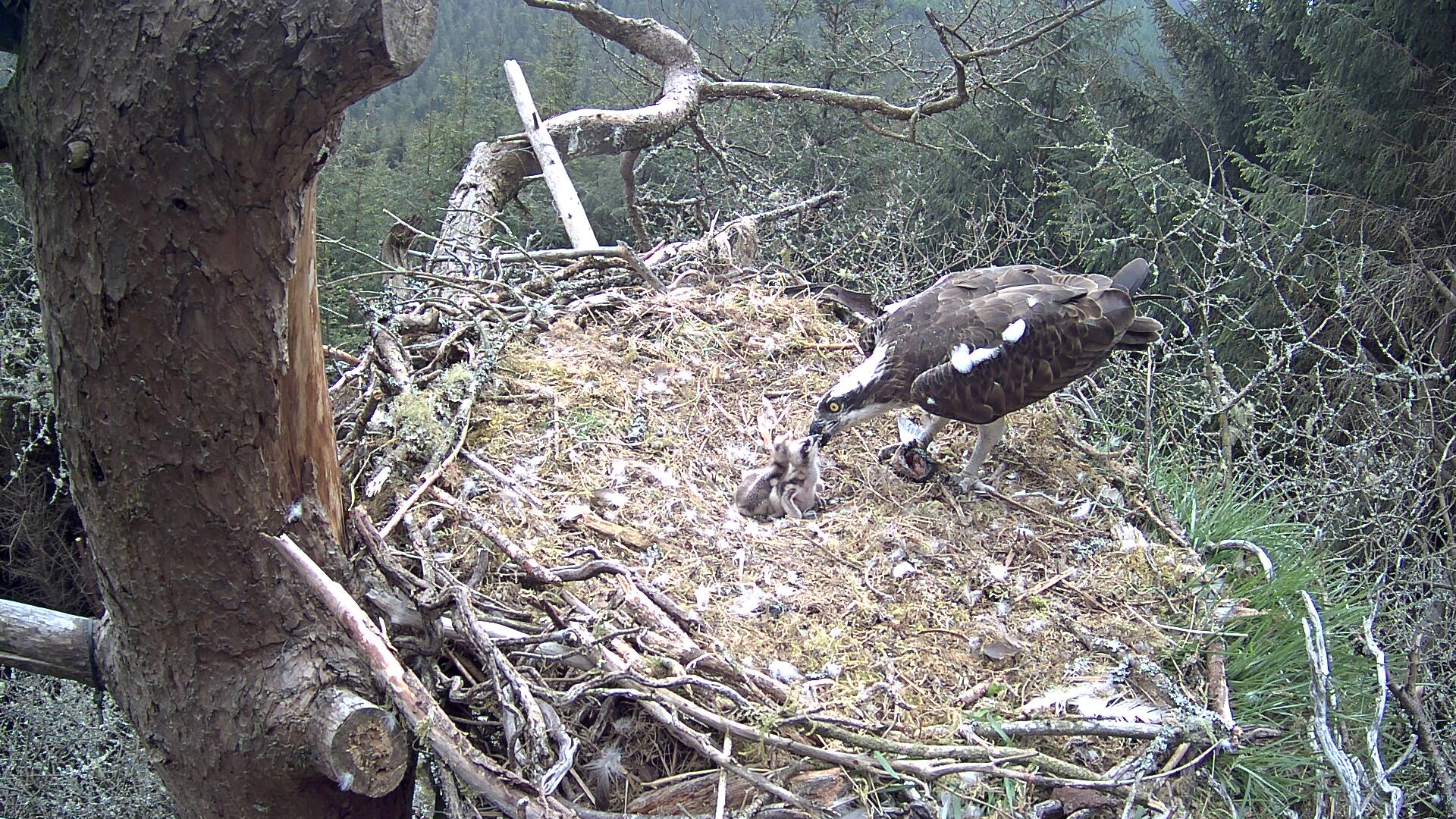 The young osprey family continue to thrive on the main Tweed Valley osprey nest and they have been fortunate with the sudden change in the weather allowing favourable conditions for PW3 to hunt for his family. The 31 May film footage revealed two good sized fish suppers in the nest and satisfied chicks with full tummies. Mrs O had also had her fill and the meal was left aside for later. Nothing is wasted however and over the course of the day, the fish were eaten by the family, right down to the tail. Their bodies are adapted to deal with the bones in the fish and to digest them. Their muscular tongue manoeuvres food into the crop initially - a food storage pouch part of their oesophagus - providing a steady supply to their stomach as required. Any undigestible material of scales and bones can be egested from the body in the form of pellets, but this is rare in ospreys and any pellets which are produced are small. This is because they have enzymes to break down the food material efficiently and have a longer intestine than most other birds of prey offering greater absorption efficiency. The only part of the fish that they may discard is the opercula - the hard bony flap which protects the fish’s gills. 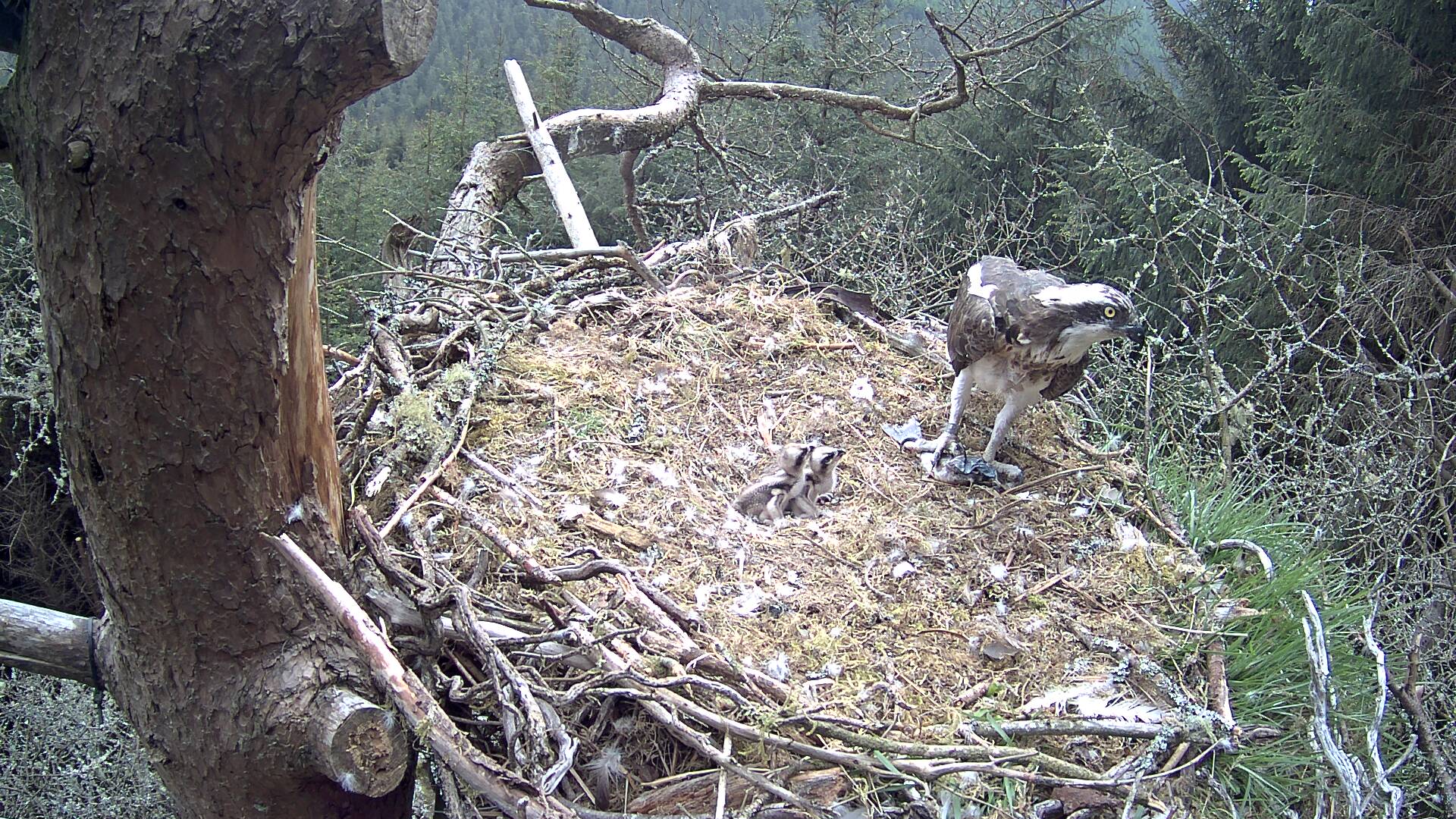 We witnessed the first spat of sibling rivalry on 3 June between the two youngsters. The restless pair waiting for the arrival of fish began to peck at each other, one being a bit more dominant than the other. They faced each other and raised themselves up on their little wing stubs and squared up to each other. This was followed by a few beak nipping attempts and pecks but was not injurious and was short-lived with one chick backing down quickly. The aggressor soon followed suit, laying down alongside and resting its head across the other's body, snuggled together and thankfully no harm done.

Two pine cones appeared in the middle of the nest on 4 June, which obviously one of the parents had brought in. Mrs O had brought a big stick onto the nest during her brief trip out for a break the previous day, so we are not really sure whether it was from her or PW3. 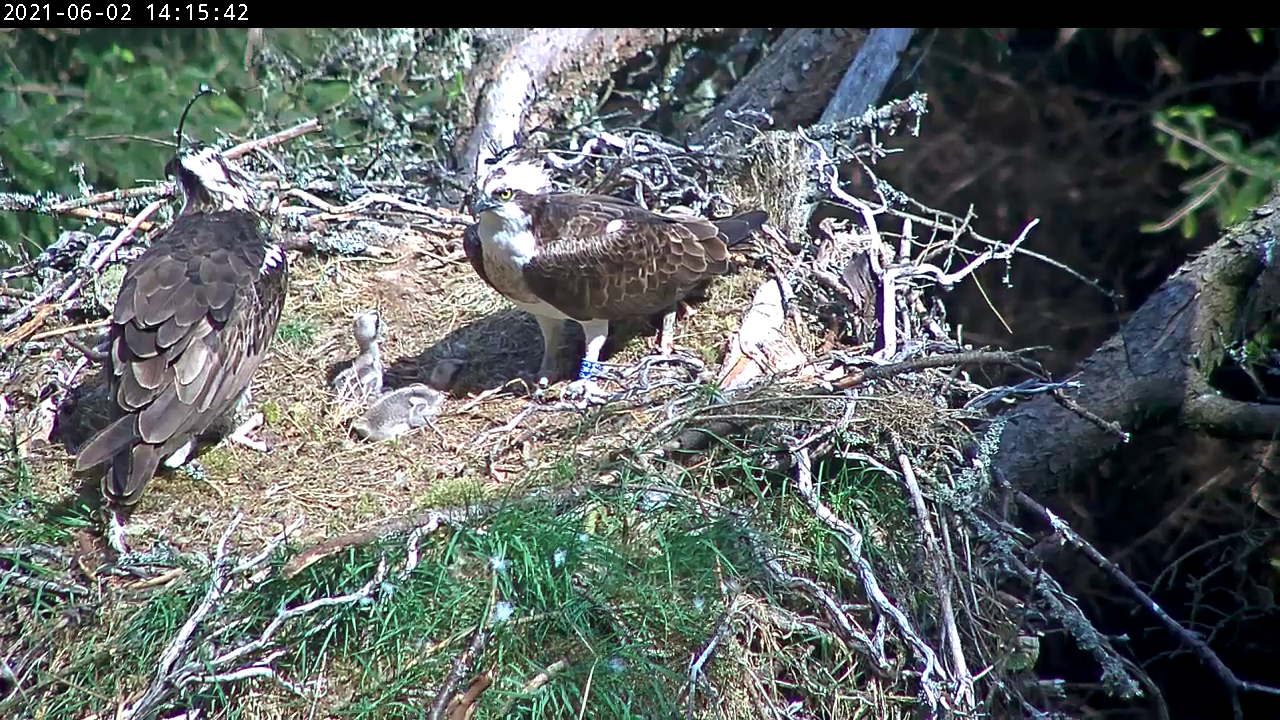 Material on the nest is usually for protection, or cleaning purposes to freshen the area but the pine cones seem to be keeping one of the chicks’ interest and it has been seen moving it around and using it as a little arm and head rest. It is curious as to whether the cones were brought in to distract restless chicks during food intervals or what the purpose of them is but whatever their intent, so far, they have served a good purpose.

Another interesting behavioural trait witnessed this week was the way Mrs O uses her body to cast shadow on the nest for the young to shade themselves from full sunlight.

Sometimes she seems a little frustrated and picks up a stick and walks round and round the nest with it before placing it back down on the edge. She is not too careful at times and has whacked the chicks with it on occasion. This restlessness seems to correspond to the imminent arrival of PW3 with a fish. She will often be vocal when she knows he is coming with food. He would sit nearby and eat the head of the fish before bringing the rest for her at the start of the season and she would call and protest until he delivered. However, now with the young, growing chicks, he is coming straight back with a complete fish from the river and the family get the first share.

We have not witnessed any interaction between the chicks and their father so far. He still delivers the fish, stays briefly for a minute or two and then flies off. He does look at them and then backs away. He is a big, powerful bird, so perhaps he is cautious of damaging them and leaves the more delicate operation of feeding to Mrs O. She is doing a great job of looking after them and although quite clumsy at times when walking about, she feeds them with such a gentleness and care. Both little ones are fed alternately, neither one seeming to be favoured more than the other in this little family. It is so impressive to see how much they have grown in just a week. They can now hold their heads up without wobbling and their bodies look as though they have doubled in length since hatching date.