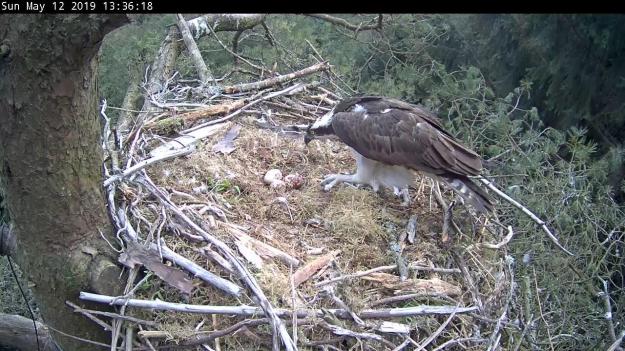 It has been a quiet and uneventful week on the main osprey nest, which is a good thing, as both birds are quite settled. Mrs O is sitting on her three eggs, while SS continues to brings fish for her. If she leaves her eggs to feed on the perch beside the nest, SS takes a turn looking after the eggs. It’s domestic bliss, for now at least! Have a look at the latest videos from the nest – click the image below to play.

This week’s video from the nest – click to play in a new window. 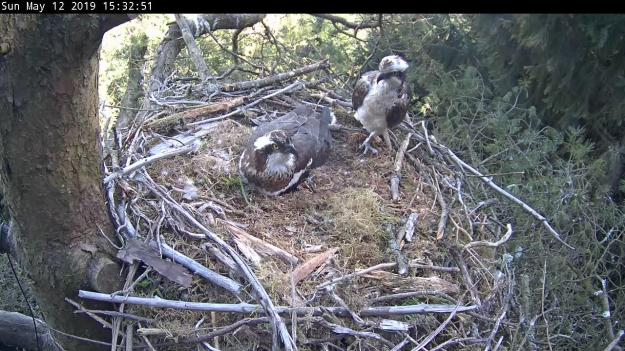 One day this week, SS and Mrs O were sitting together, both staring up into the sky, as if watching another bird flying over. They did not appear to be alarmed, and displayed no signs of anxious behaviour or distress, although the posture of SS could be considered protective; perched slightly above her with his tail over her back.

SS out on the loch 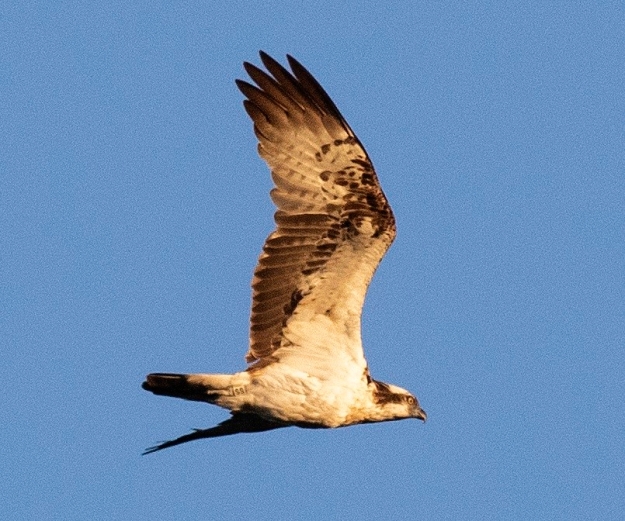 Our 20 year-old male SS was spotted on a fishing trip to St. Mary’s Loch on the evening of 12 May by John Wright, the Golden Eagle Officer for the South of Scotland Eagle Project. He managed to take a fantastic photograph of him as he flew by. This is the first time that he has ever been spotted and photographed flying and fishing at the loch, and we were delighted to receive the photograph of him. John also spotted another couple of ospreys in the area. One was un-ringed, but the other was PX5, a 3 year old male from the Solway area.

We have news about the ‘back up nest no. 2’ birds, which is somewhat bittersweet. We were very disappointed that the birds that were holding the territory at the end of last summer hadn’t returned to the nest. Considering the remoteness of the area, Tony and Graham managed to set up a live camera viewing system via satellite, via masts running over numerous hills to beam into the Glentress Wildwatch Room and Kailzie Gardens Osprey Watch. We were convinced that this pair would return this spring, and when they failed to take up residence on the nest, we were left wondering why.

This week, one of the wildlife rangers spotted them, not at the camera nest (which has been occupied for about 10 years) but at a new nest site that they have built for themselves nearby. The area that they have chosen is near to clear felled trees, where birds tried to nest previously. A nesting platform was put up to lure them away from tree harvesting areas about 10 years ago, and this became our ‘back up nest 2’.

Sadly, the original ‘back up no. 2’ nest birds have died. The good news is that we think the late partner of 8C, an un-ringed bird, is potentially with the new male from the end of last season at this new site. We may not find out, in the absence of a camera, but in terms of osprey nest sites, they have certainly chosen well for panoramic, elevated scenic views. We just have to hope they have selected a good enough tree to withstand the test of time.

More very exciting news came from a former volunteer for the Tweed Valley Osprey Project this week. He got in touch to say that a pair of ospreys have built a nest about a mile from his house, and they can see the birds from their home. They are able to zoom in with good binoculars and cameras from a safe distance, without disturbing the nest. This is a brand new nest site, and great news. We think potentially it could be the birds that left the original back up nest site, or it could even be new birds that have taken to the area.

We have news that other raptors are also doing well and we now have 2 nesting pairs of red kites in the Scottish Borders, one pair in the Tweeddale area and worth looking out for and a pair of peregrines that have struggled to breed in their location previously, are now on a nest with eggs.

Goshawks that have been satellite tracked in the area of Tweeddale continue to be monitored, and data has revealed their regular haunts, showing where the mature birds which are ready to breed are taking up territory.

Golden eagles which were released as juveniles are thriving and ranging to explore the south of Scotland, and a sub-adult bird has also moved into the region too. It is hoped that territories will be established in the future, and that they will start to breed here.

Another reminder for past volunteers to get in touch if they would like to celebrate SS being 20 years old this year on 8 June.

Contact Diane on This email address is being protected from spambots. You need JavaScript enabled to view it. to confirm your attendance. We would love to celebrate with all past and present volunteers and project supporters, and share a few stories. There’ll be a chance to show off your osprey-themed talents too, be they arty, crafty, wordy, ‘techy’, musical or just plain daft! 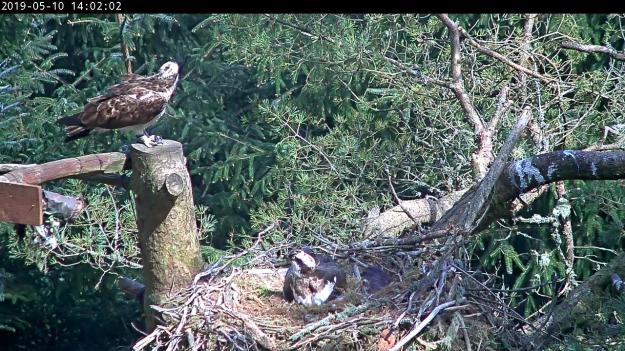 Our live camera feed is still down, but we are working on a solution

Unfortunately, the live camera feed is currently down due to ongoing technical issues. They have people in the field working on a solution, and they apologise for the inconvenience. We’ll have it back up and running as soon as possible – and you can see videos from the feed, updated every week, on our Osprey Playlist. Thanks for your understanding.