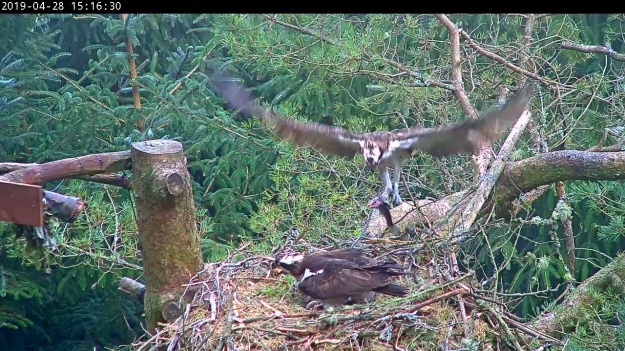 SS drops in with a fish for Mrs O

The Friends of Kailzie Wildlife has successfully been awarded a grant for Tweed Valley Osprey Project to hold a celebration to mark the 20th birthday of white leg SS, the male osprey on the main nest since 2004. To mark the occasion we are holding a celebration in the Osprey Centre at Kailzie Gardens on 8 June, and will be having a large sculpture cake of the birthday bird. Join us if you can!

We would like to invite all past and present volunteers and supporters of the Tweed Valley Osprey Project to come along. We will have some refreshments and cut the osprey cake and share it.

We would also like to invite volunteers and supporters to help celebrate by sharing memories, artwork, photos, or poems, and to showcase any osprey-related talents they might have, to display on the day. Any contributions will be photographed or digitised and used for the proposed production of a souvenir booklet about the life of SS, our most celebrated osprey.

Many volunteers have been contacted by email but many addresses are no longer in use, so please get in touch if you would like to come along and visitors will be most welcome also.

News from the nest 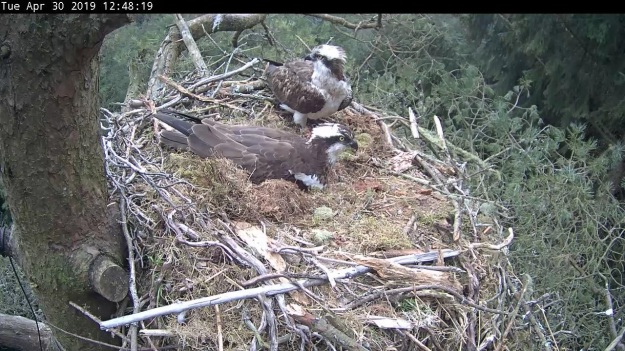 Mrs O sitting on the eggs with SS looking on

This has been a good week at the main nest site for Mrs O and SS. They are proving to be a very settled couple. Fish are being delivered regularly by SS, and he is dutifully giving them to Mrs O. She moves up to the perch to feed, and he takes over for a stint of egg sitting. She then briefly leaves the nest site and has a stretch of her flight muscles, and a chance to excrete away from the nest. 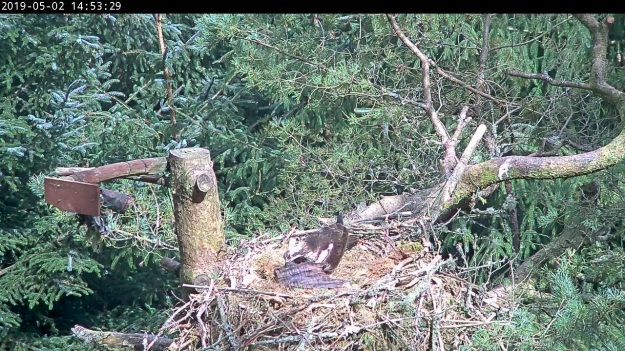 Mrs O moves that bark about

Time passes slowly for Mrs O, sitting on eggs for long periods of time. Focusing on something to occupy herself relieves the monotony. This week, the point of interest for Mrs O was a squared off piece of bark. She moved it about and fussed over it, and at one point even had it balanced above the eggs, before giving it a heave, along with a clump of moss that had attached itself. She positioned it towards the back of the nest, from where we can view it on the camera. A contemporary home often does have a feature wall, so we applaud Mrs O’s thoroughly modern take on the traditional osprey nest.

Film footage taken of the pair on the nest on 3 May gave a bit of a scare. It appeared that something was sticking up out of SS’ back. It looked like a twig, but it was perpendicular to his wing and we were worried that it was sticking into him. Footage from the next couple of days has been analysed since and it has gone, so presumably SS will have removed it from his feathers when preening. 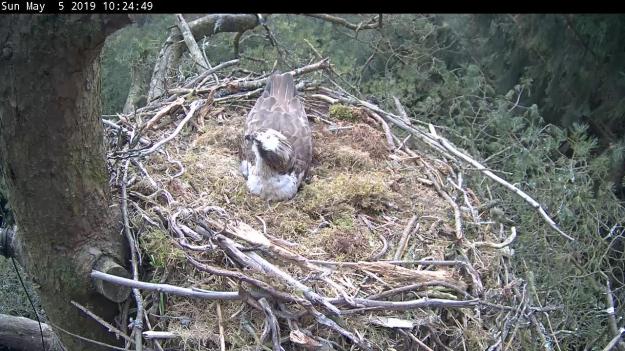 All is well for SS

One of the offspring of SS is a male bird with yellow leg ring 8O. He was fledged from the main Tweed Valley nest in 2006 when SS was with his original un-ringed partner. We know that he has been breeding and doing well over at the Wildlife and Wetlands Trust Reserve of Caerlaverock in Dumfriesshire, because the nest site had a camera to view the nest back in the visitor centre.

He first took up the territory in 2012 with an un-ringed female, but had no young. However, he bred successfully with his un-ringed partner in 2014 and 2015, rearing two chicks per year – two females, FK2 and FK3; and then the following year two more female chicks ringed as CN0 and CN1.

From 2016 to 2018 another two ospreys occupied the site, and didn’t return until this spring, when he paired up at the nest site again with an un-ringed partner. All looked good for breeding again. Sadly, the pair have abandoned the site and moved to a nearby nest site instead of the camera site, and although they are settled and hopefully with eggs, they cannot be viewed on the live screen.

We are certain that the other offspring of SS will be breeding and successful too, but we do not know anything about them as they will be on territory where there are no cameras. 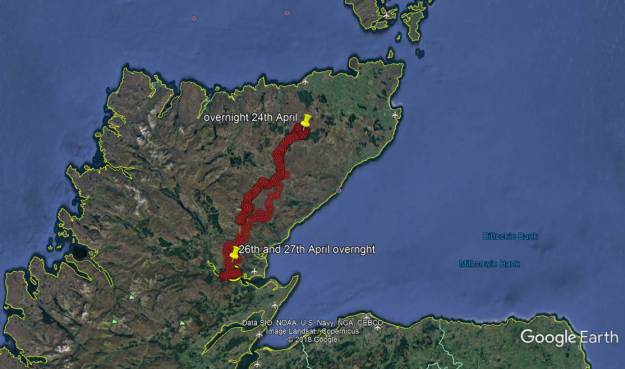 Another Tweed Valley favourite is FK8, the female osprey who nested up in the Dornoch area for the first time last year. She has a tracker and we know that she returned safely but didn’t directly settle down to nest. She was flitting back and forth to favourite hunting grounds further north to Loch Slethill and Forsinard area.

The last data that we have received shows that as late as 24 April she was staying overnight in forest land near to Loch an Cloiche, but returned to her nest site and spent two nights there on 25 and 26 April, showing the last tracked point on 27 April. Hopefully this means that she has paired up with her partner and is now on eggs, but we will wait to see if more data is returned.