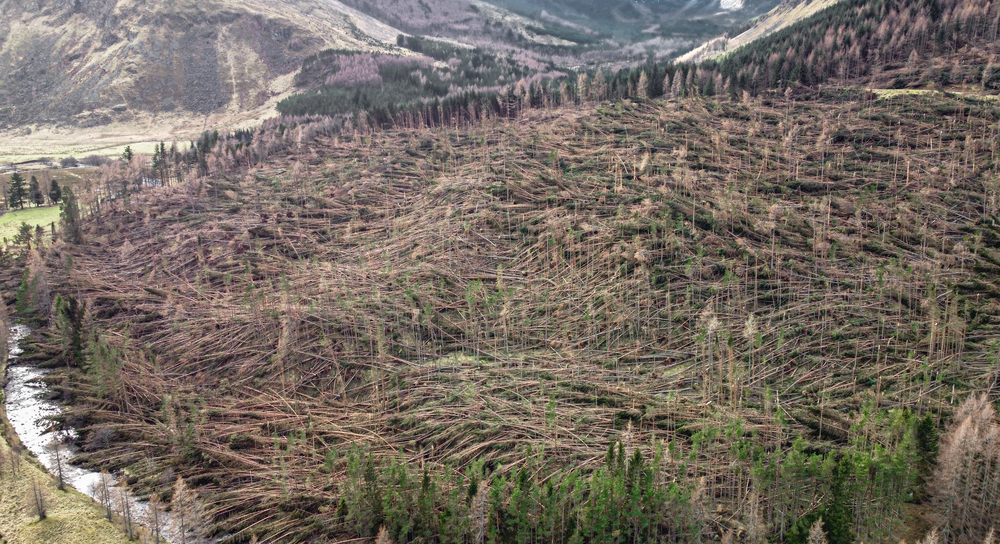 The damage caused by storms Arwen and Corrie could speed up efforts to restore a strip of land along the River South Esk and the White Water in Glen Doll, Angus.

About a third of conifers on this site came down.

These conifers would have been slowly removed in the next 30 – 40 years to widen and improve the riparian zone running through the forest. The recent storms have sped up this process… once we’ve cleaned up the mess, that is.

Riparian restoration is a key element in our land management planning across Scotland. The aim is to replace conifers that are near river systems with native broadleaf nature corridors.

These are important areas for biodiversity and help mitigate the rising river temperatures we are seeing due to climate change. The west region has already planted over 6,000 native trees such as alder, birch, aspen, bird cherry and hazel. These conifers will be replaced similarly. 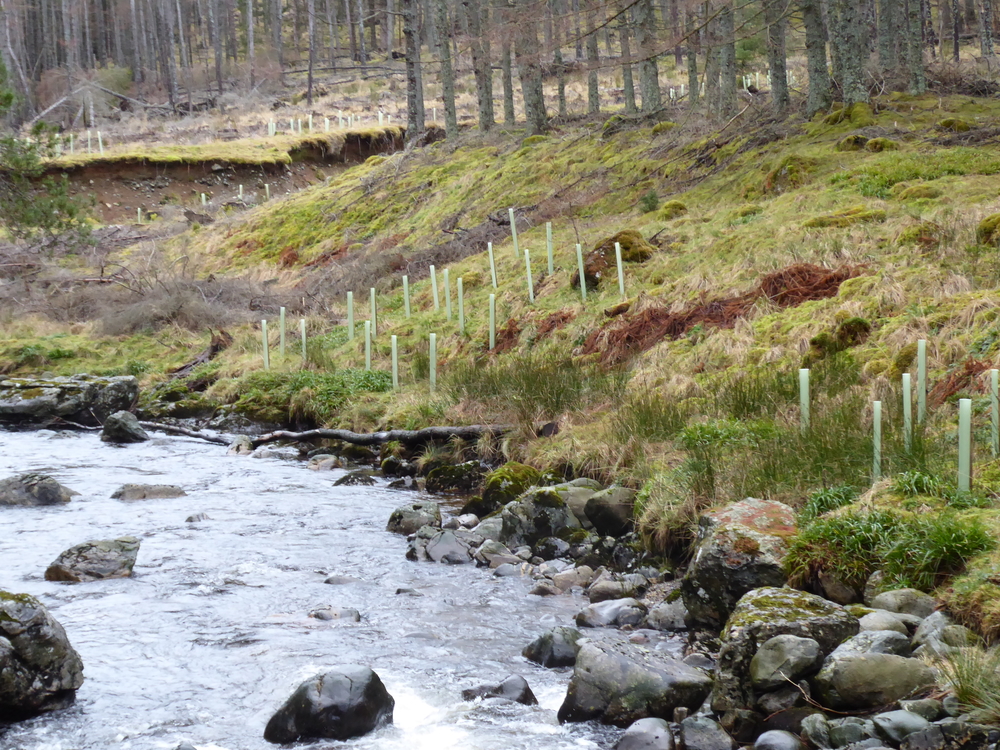 An example of riparian zone planting elsewhere in the region.

“Species such as otter, brown trout and Atlantic salmon really depend on healthy aquatic and riparian habitats. Restoring riparian zones is hugely beneficial for them, as well as the overall health and vitality of rivers and streams.

“They also provide the arteries of connectivity throughout a landscape. They link a variety of habitats and provide safe access routes for a range of species, from fast-moving mammals and birds to slow-moving, but equally important and often rare invertebrates, lichens and mosses.

“Planting native woodland helps keep the water chemistry balanced and provides shade to help regulate the temperature of the water. It also provides a food source for fish and animals as falling leaves and insects drop into the water.”

The benefits continue even after the trees die, explained Ventress.

“Different invertebrates move in to feed on or make their homes in the dead and rotting wood, which goes on to feed small mammals, birds and fish.

“In the River South Esk, we’ve discussed keeping 15 - 20 windblown conifers complete with their root plates attached. These will be added to the watercourse in consultation with NatureScot and with the partners in the River South Esk Catchment Partnership for large woody debris. This woody debris creates habitat niches by creating different depths and water flow within the river, boosting biodiversity under the water.”

The site will be monitored over 10 years to ensure that the new trees thrive and that conifer regeneration, which would threaten to over-shade them, is not allowed to take hold. We will continue to build on the work of this project and earlier riparian planting by adding more native trees along the catchment as the forest is restructured and with the eventual inclusion of less common trees and shrubs like dark-leaved willow and juniper. Glen Doll’s trails remain closed to visitors while the team clears storm debris.

Learn more about riparian zones on our podcast