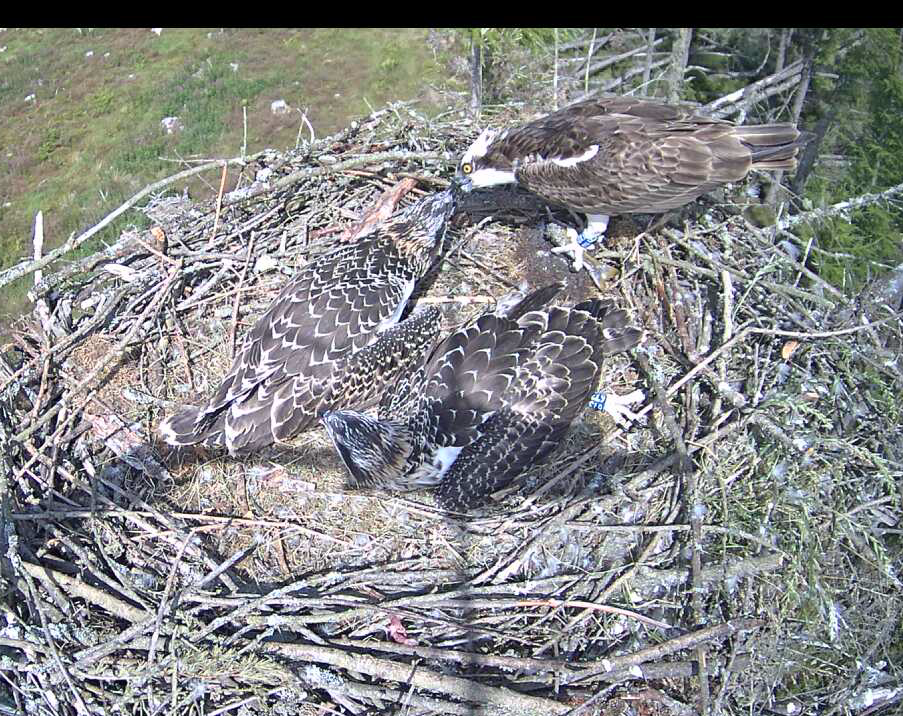 This week, many ospreys across the region will have taken their first flights and have started their final journeys towards reaching full adulthood. Here in Tweed Valley, it was young Megget that was the first to leave the main nest on 18 July. Her first trip was an impressive 240 metres. This was in the evening and the tracker relayed data to show that she was still there in the early hours of the next day, at just after 1am, before eventually returning to the nest - most likely to be fed. She has also reached the edge of the forest and travelled up and down the edge of the plantation overlooking the open land beyond it. This will have been her first glimpse of landscape other than the dense pine trees where she has been raised. Her sibling, Talla, was the next to brave a first flight and went in the opposite direction, crossing over the valley further into the forest confines. This trip was about 400m and was also an evening excursion which strayed into the early hours, perched up in a pine tree before returning to the nest site. Both birds are now confidently going to and from the nest in practice flights but not going beyond a half kilometre range. Neither have left the forest yet.

At the ‘Back up no.3’ nest site, both young ospreys have successfully fledged from there too. The first to leave the nest was 673, on 20 July, followed by osprey 672, two days later on 22 July.

We are now receiving images from that nest site via a camera link and so for the first time have been able to identify one of the parent birds. The female adult is not ringed but the male adult has a blue ring with white lettering of FK0. This is really interesting to discover. We also know the history of this male because he is another male osprey raised here in Peebles, from a nest in 2014. Not just any nest though! The same nest that PW3 came from. Therefore, providing the adult birds at the nest site have not changed, PW3 and FK0 are genetically related brothers, but not from the same brood. Raised two years apart from each other, they are now both back breeding in the area close to their natal site. That brings us to four male ospreys raised in this area that we know of, to have returned here to breed. ZU from the original back up nest in 2011 and yellow 8C was also from that nest site in 2004. The site is now abandoned and has been since 2014. The adult male there was green 7H from Crieff, who would have been 21 years old this year if he had survived, so the chances are that the nest site may have become vacant due to 7H not having made it back. The female adult at the site was also an unringed bird .

We cannot make any judgements regarding statistical analysis of these males returning to their ‘home’ area to breed because we do not know the identities of most of the other adults and it is only a small population sample. It is certainly of incidental interest and worth noting to see if a pattern of dispersal of males emerges over time and across more areas. By comparison we have no records to date of any females returning to home turf to breed in the Tweed Valley Project area but we do have more records of females moving into new areas to colonise and breed. 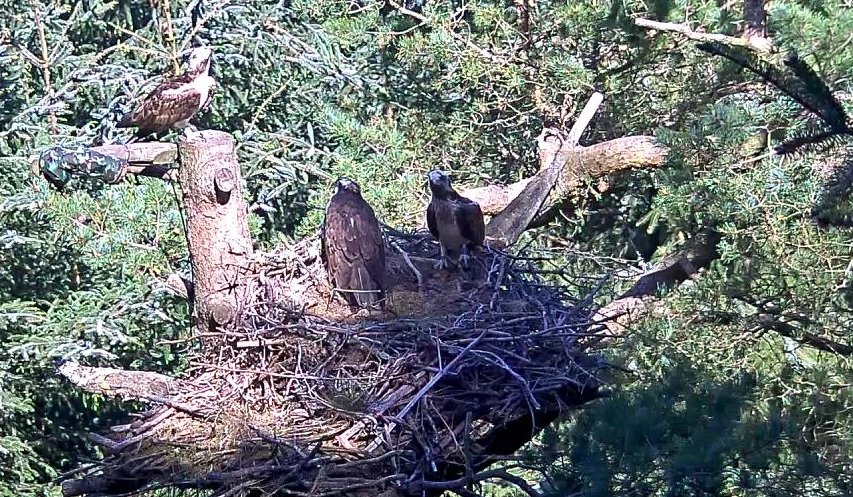 FK0 not only hailed from this region originally but he returned as a young bird in 2018 where he was seen at the ‘back up no.2’ nest, late in the season and bonding with an unringed female there. The site was later abandoned and back up no.3 nest was discovered in a new area not far from the no.2 nest. This is where he has raised the two young birds 672 and 673 with the unringed female this year. He was even pictured on the main nest as a young returner rivalling white leg SS for his territory during the early days of him settling with Mrs O when he was 4 years old. Mrs O was also seen at the back up no.2 nest site mating with FK0 during the same season before finally laying a clutch of eggs in the main nest and settling down with SS. At the time we were calling the osprey saga in Tweed Valley a 'game of thrones’, as there was so much to-ing and fro-ing across the nest sites at the time. Osprey private life was anything but boring that year! The disruption of the pairings was caused by the sudden death of Yellow 8C in 2018, due to drowning in a pond with netting. His female unringed partner was chased off the nest by Mrs O as she flitted between the main nest and the ‘back up no.2’ at the time.

FKO eventually has settled with an unringed female at ‘back up no.3’ nest this year, so potentially this female could be the partner of the deceased 8C but this is not confirmed because we cannot identify her for certain without a darvic ring.