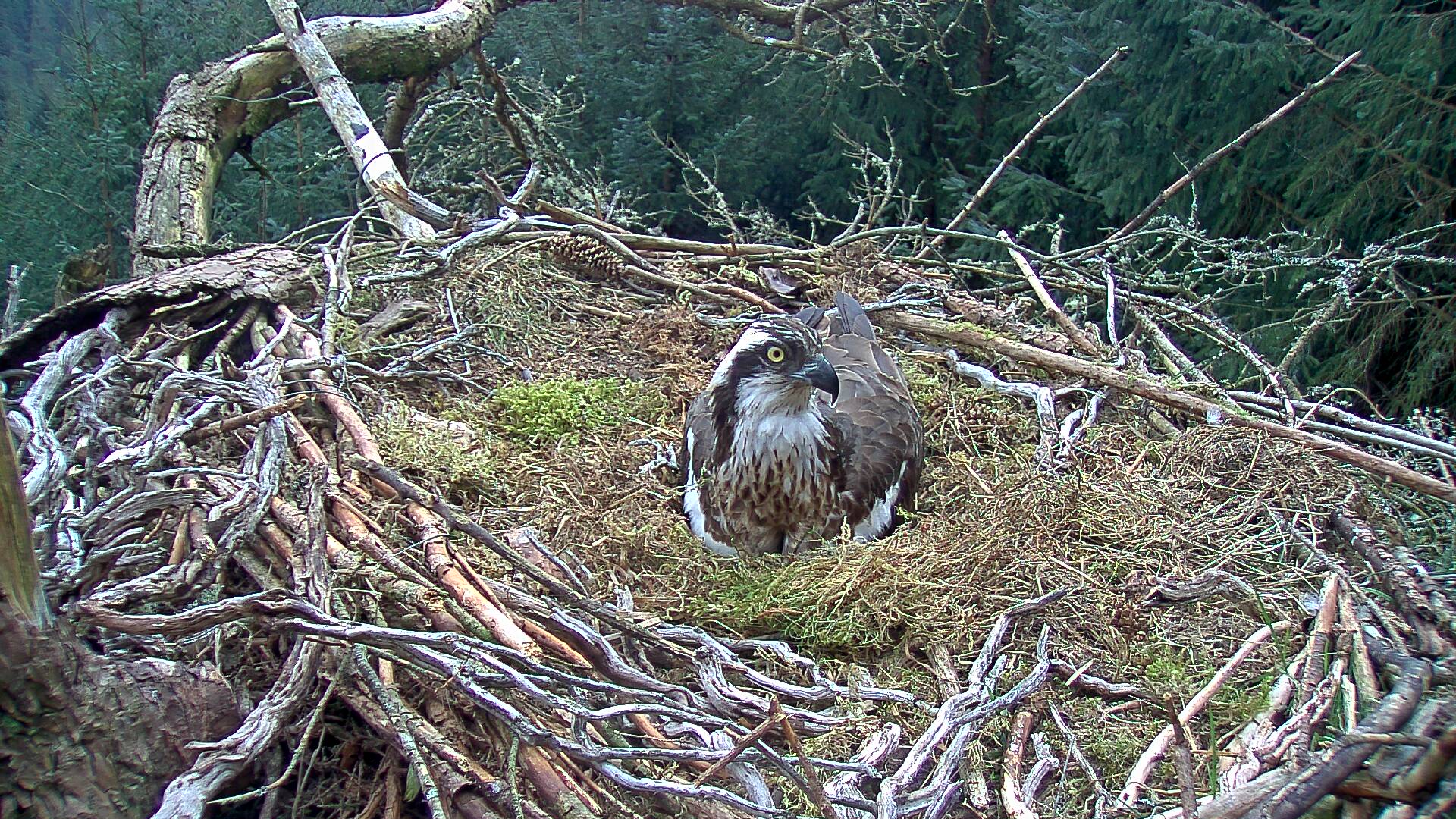 The Glentress Forest Wild Watch room is now open to the public and the main nest camera is streaming live images to the screen. Volunteers are back on duty and have started their shifts to monitor the action on camera, ready to zoom in and record some great action photos and videos. They will be on hand to chat to the visiting public to let them know how the ospreys are doing and explain the latest antics of the resident pair.

The first osprey back at the main nest site was Mrs O. She was early this year, arriving on 22 March. She was seen at the nest eating a fish and looking fine and healthy after her migration journey, ready to spend the summer months in Tweed Valley to breed.

She spent days and days just sitting at the nest site staring up at the sky, watching and waiting for her partner PW3 to return. During this time, she had some unwelcome attention from an un-ringed male osprey who made himself available as a would-be husband. We did witness some half-hearted attempts at mating and an egg appeared in the nest on 13 April, but Mrs O showed no interest, making no attempt to settle into the nest or to incubate the egg. She continued to spend her day watchful and perched to the side.

On 16 April, PW3 returned and was seen for the first time this season at the nest. We couldn’t see the leg ring number at first as it was prior to the centre opening meaning we had to rely on pictures taken from phone screen shots. But it was evident from the behaviour of the pair that they seemed very settled together and were an obvious pairing. Three days later the mystery egg vanished from the nest, likely pushed out by PW3 because it wasn't his.

The pair bond was strengthened between Mrs O and PW3 when he began to deliver fish to share. Mating at the nest site quickly followed.

On 23 April, for the first time, we were able to see for certain that the pair had eggs. Two were in the nest, spotted on camera when the pair did a swap over to incubate. On 29 April the volunteer on duty was delighted to see there was now three, noticed when PW3 stood up from his turn at looking after them to allow Mrs O time to go and feed. 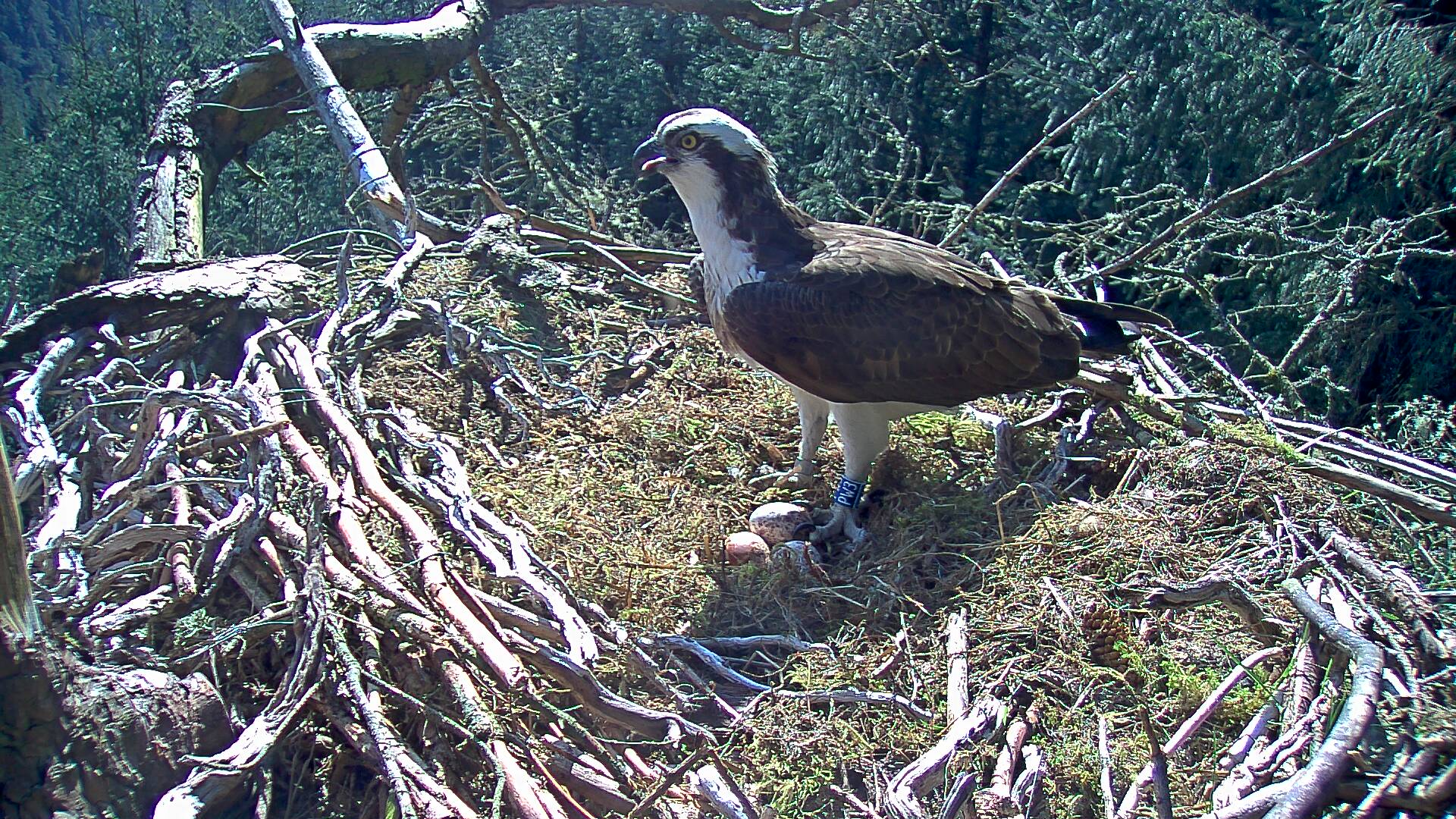 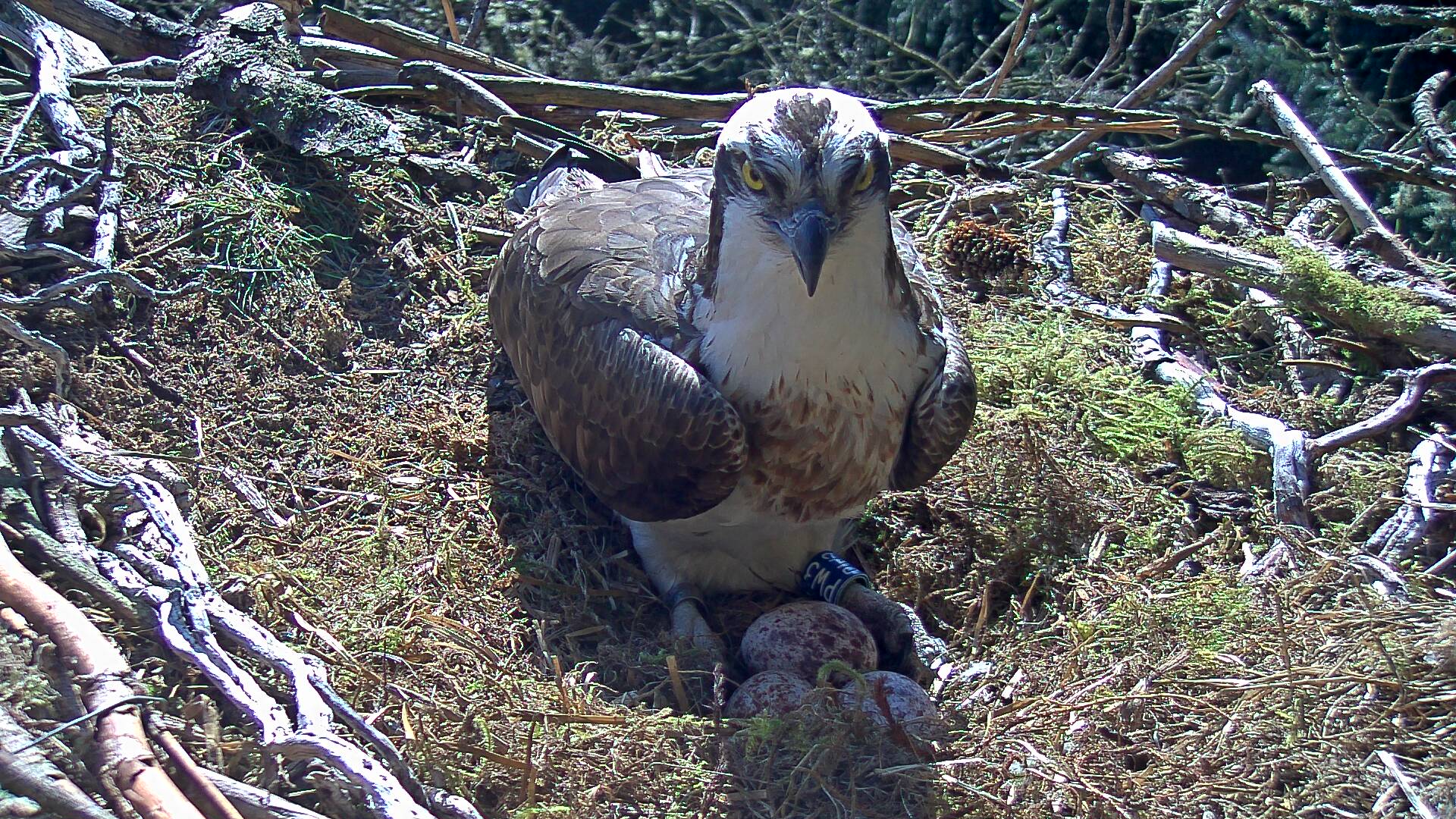 So, the main nest looks all set up for a good start to the season and hopefully all will be well. We have news confirmed that at least five other osprey nest sites within the Tweed Valley Osprey Project area are now occupied with resident pairs. The site west of Peebles has a resident female who has been sitting now since the end of April. We are hoping that it is the returning female from last year with ring number FS2, who originally came from Loch Arkaig in the Highlands. Her partner is an un-ringed male.

Not such good news at the Back up nest so far, as it doesn't look as though the pair has returned. There have been no confirmed sightings and the camera has had technological problems, so we are waiting to resolve these in order to find out what is happening there.

The male bird from that nest site was a regularly seen fishing along the River Tweed and was frequently seen in Walkerburn last year. Unfortunately, he has not been seen so far this year which doesn't bode well.

The ospreys make such long migration journeys to return to breed and face many hazards along the way. It was so saddening to read news stories of an osprey and red footed falcon that had fallen victim to illegal shooting on 28 April as they migrated over Malta at Gozo, which was confirmed by Birdlife Malta. The osprey was taken to a vet but died of its wounds soon after. The falcon died due to gunshot wounds too.